Michael Phelps body proportions are given below:

With a total of 28 medals, Michael Phelps is the most decorated Olympian of all time. At the height of his career in Rio 2016, he had won no fewer than 23 gold medals, more than twice the number of the second-highest record holder! His record will not break anytime soon.

Like the icing on the cake of his achievements, he broke Mark Spitz’s record in the 4-meter relay, which had stood since 1972. Phelps is definitely a superman. He’s basically the Lionel Messi/Christiano Ronaldo of swimming.

After winning eight gold medals at the 2008 Beijing Games, there was no doubt he would be named Sports Illustrated’s “Sportsman of the Year 2008.”

As expected, he did.

What makes Phelps so good at swimming?

For him, the medal podium is like a second home. His quick combination of genetics, willpower, and skill has led to his enormous medal count. Phelps has an oddly ergonomic efficiency in the pool advantage over his competitors.

His extreme advantage is due to his freaky body structure. The following abnormal characteristics of his body play a big role in his extraordinary talent.

He stands tall at 6’4″, which is the ideal height for swimming. (Source)

His arm span is 6’7″, 3 inches more than his height. Generally, a person’s arm span is equal to his/her height, but Phelps is not an ordinary person. This anomalous characteristic provides him with an absurd amount of pulling power in the water. Basically, his arms work as powerful propulsive (boat) paddles in a more efficient way than his competitors. 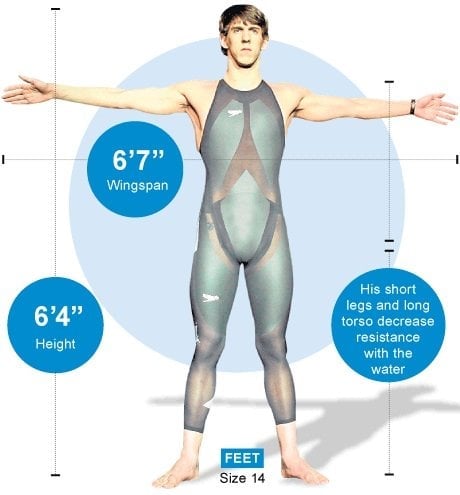 His upper body is that of a 6 ‘8 “man, which is insanely long. So he has an amazing reach with every stroke, which pulls him through the water ahead of the competition.

Surprisingly, its lower body is only 5 ’10 “long, which is actually beneficial as it reduces resistance against water.

Phelps has huge palms that support his paddling ability and size 14 feet, which essentially act as flippers (the kind of fingerless arms that seals have).

This humongous set of feet is attached to extremely flexible ankles, which work like fins (similar to a shark).

To do that, it needs a certain amount of recovery time. 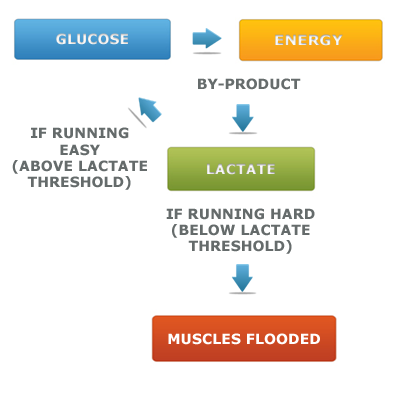 Glucose is used up during workouts, and after the energy is burned, it is converted to lactate.

Athletes often envy Phelps because it’s scientifically proven that his body produces half as much lactic acid as his rivals need to process, significantly shortening his recovery time.

If not all, athletes face tight muscles, muscle pulls, hamstrings, and body stiffness in the lower body during their training. Although this can be tackled by stretching the target muscles using dedicated equipment like stretching machines, Phelps has a natural advantage in this area.

Genetics is Not the Only Reason behind Phelps’ Success!

Two words should not be forgotten: Dedication and Hard work

Saying that someone is “born” to win is an absurd claim. In fact, it is an innate “desire to win.” Michael Phelps is no exception.

His extensive medal collection results from the extreme hard work and dedication he puts into his training each year.

Six hours a day in a six-day training week is no joke.

Getting a stomachache already?

A superhuman like Phelps requires a superhuman diet. Phelps consumes 12,000 calories per day! (An average person requires 2200-2700 calories, depending on his/her body structure). Just reading the amount of food he eats in a day is enough to give anyone a stomachache.

This enormous calorie intake is necessary to balance all the calories he burns during his workout to ensure that he does not lose weight.

The work he puts into his training is no joke. His success is based primarily on his training; his genetic advantages are only secondary. The question is, will we see another athlete of his caliber in the future?

Do you remember why Micheal Phelps is a record breaking swimmer?