Munchhausen’s trilemma suggests that it is impossible to prove the validity of an argument.

Ever heard one of your friends tell a story which just wasn’t true? Ever heard someone make a wild claim very confidently? Or have you ever heard someone state a fact that doesn’t sound right? What is the next step to this? How would you respond to these “wrong” claims/stories?

You look for evidence, which in turn helps you prove that your claim was right. This is the basic structure that all of us follow while we reason in our daily lives. We look for evidence to support our arguments and, the same evidence can be used to refute arguments.

But what if there is no way you can prove an argument to be true? What if what you think is evidence and proof, is just your method of convincing yourself that you’re right?

Karl Friedrich Freiherr Von Münchhausen was a German baron born in 1720. Among his military achievements, he had a flare for telling stories which he had “collected through his travels”. Many suspected that his tales were highly exaggerated and untrue. 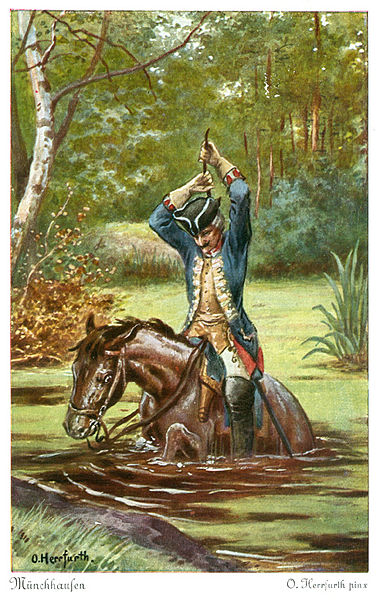 A representation of Munchhausen pulling his own hair to get out of the swamp.  (Photo Credit : Oskar Herrfurth/Wikimedia Commons)

Referencing the German baron, a debate in epistemology (a branch of philosophy concerned with nature of knowledge), is called “Munchhausen’s trilemma”. This debate mentions that it is impossible to prove/justify the truth of any argument. The validity of an argument cannot be proven, and all methods of justification are flawed.

Munchhausen’s trilemma puts forth three ways in which our methods of justifying arguments are flawed. These three methods are-

Circular reasoning is an incorrect form of using logic. It is a method of reasoning in which you end up with the argument that you were trying to make in the beginning. There is a cause and effect relationship assigned to such a reasoning, but in reality, it’s just going round in circles. 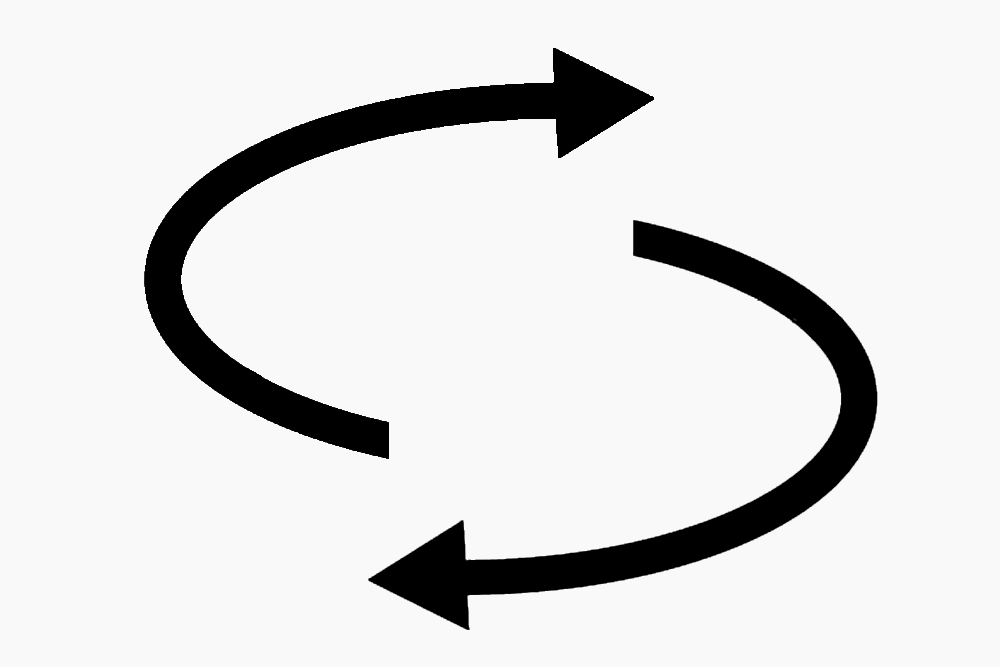 A representation of circular reasoning, the premises and the conclusions are same.

The template for this kind of reasoning is-

A is valid because of B

B is valid because of A

Also Read: What Are Syllogisms?

A: Our teacher told us that lying is bad.

B: Why is lying bad?

A: Because our teacher says so.

A: Therefore, lying is bad.

Circular reasoning is considered to be invalid because often while stating the premises, it assumes them to be true.

Have you ever heard a conversation between a child and their parent? Have you heard them questioning everything the parent says in order to learn more about the world? Eventually, a situation arises in which the parent has no answer. This is because the child has asked something which has no answer. This method of disproving the validity of an argument is known as infinite regress. 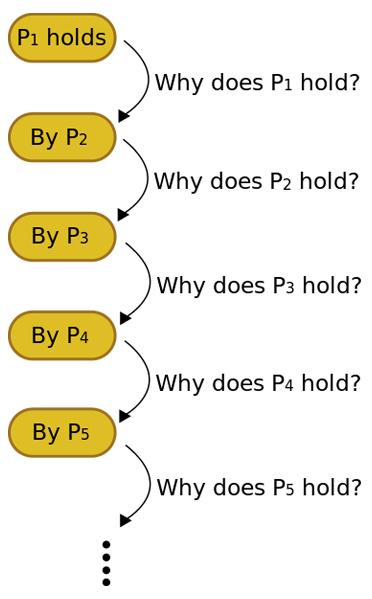 They depend on existing knowledge/notions/views that people have about the world or certain things.

Common sense is a great example of such pre-existing knowledge. Common sense demands that you should be familiar with various things around you.

Munchhausen’s trilemma determines that this idea of pre-existing knowledge is problematic and cannot determine validity. Consider the statement, “A mango is the most flavorful fruit”. That statement will only be true without requiring any proof, if it presented to another person holding the same opinion.

Hence any statement can be passed off as valid without having to prove validity.

This trilemma falls under the field of epistemology. Epistemology is a field in philosophy, which is concerned with the theory of knowledge. It studies the structures, methods and ways through which we acquire knowledge or justify our arguments. It provides us the tools by which we can reason accurately, and make valid arguments.

The study of epistemology also disbands our traditional views of validity, accounts for bias and through a methodological analysis, provides us with accurate information. But why is this important in contemporary times?

Also Read: What Is Dialectics? What Is The Triad Thesis?

We live in times where we are surrounded by all kinds of news. Media is playing a strong role on the global platform. Epistemology as a field, stresses on the importance of research and fact-checking for the individual. While we have the presence of media to provide us with information and shape our opinions, we should not alienate ourselves from this process.

By having precise methods of acquiring knowledge and presenting it, we eliminate the possibility of semi-literate arguments and opinions. In times where we have so much of information around us to build our opinions, it is extremely important to know how we are justifying ourselves, if we are lacking, and what we need to work on.