Henry Moseley’s experiments revealed that each element has a unique atomic structure that interacts with X-rays in a distinctive way.

This string of words will take most of us back to our chemistry class in school, where we were asked to memorize the elements of the periodic table… at least up to element 20. This practice completely defeated the purpose of having a periodic table, but it was ultimately quite useful. We were also taught that elements in the periodic table are arranged according to their atomic numbers. This is the number of protons in an atom, the same as the number of electrons.

But… how did we figure that out? Since atoms are really tiny, counting them by sight isn’t humanly possible, so how did the scientists that developed the periodic table know what an atomic number even was?

This was all thanks to one serendipitous winter in Germany and a young brilliant scientist from the University of Manchester.

Röntgen And His Rays

Some might wonder why scientists didn’t just look at atoms under a microscope and count the number of protons? Well, one can use the world’s most powerful optical microscope and still not be able to see an atom. We can only see things that disturb the path of light waves and reflect them back into our eyes.

An atom is 10,000 times smaller than the wavelength of visible light, so its presence doesn’t have any effect on the waves. Imagine a grain of sand standing up against a giant ocean wave (not to scale).

The exploration into the world of subatomic particles got a huge boost after the discovery of X-rays by Wilhelm Röntgen. It was the winter of 1895 when Röntgen, like many other scientists of his time, was investigating the rays emitted by the Crooke’s tube.

The Crooke tube or cathode ray tube is a sealed glass vacuum chamber with two electrodes placed inside. The tube would give off a faint glow when voltage was applied across the electrodes. 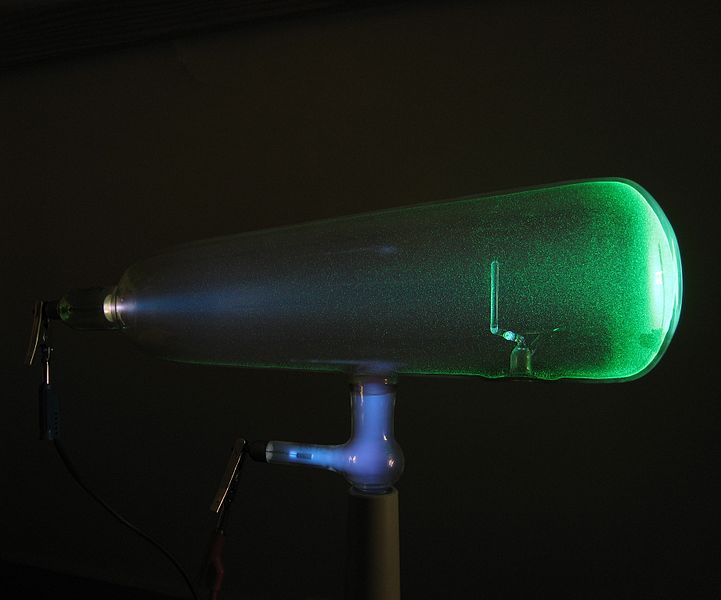 Röntgen found his Eureka moment when he observed that the rays emitted by the tube were creating bright spots on a platinobarium screen that was almost 9 feet away from the setup. To test the penetrating abilities of the invisible rays he shielded the tube with thick black cardboard, yet a glow was still seen on the screen. He named these unknown rays— X-rays.

Three days before Christmas, on the 22nd of December, he placed his wife Anna’s left hand on a piece of photographic paper and captured the world’s first bone X-ray. The rays passed through the skin, but were stopped by her bones and her wedding ring. Astounded by the dark silhouette of her hand on the photography plate, she exclaimed, “I have seen my death”, as this was the first time in history a living person had seen their own skeleton. 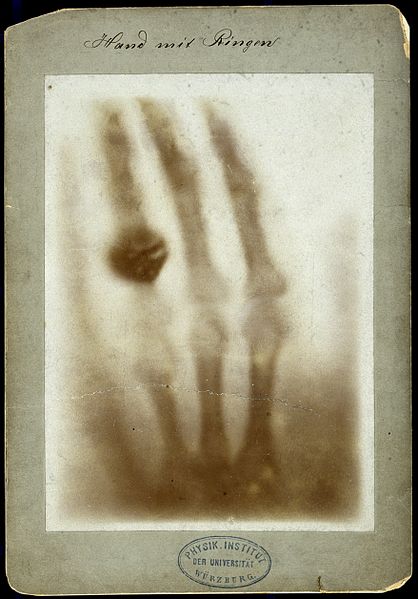 The first ever X-ray of a human hand. (Photo Credit : Welcome images/Wikimedia commons)

Also Read: How Do We Know So Much About Atoms When We Can’t See Them?

Within the next few years, X-rays became one of the greatest human discoveries, as they revolutionized science. It also amused general folks who visited X-ray exhibitions with attractions such as “Count the coins within your purse” or “X-ray photographs taken here”. To read more about the uses of X-rays, click here.

So, how did the discovery of X-rays solve our atomic number problem? Luckily for us, X-rays have wavelengths smaller than the size of an atom and can therefore interact with them.

By the 1900s, it became clear that X-rays were electromagnetic waves, just like visible light, but had higher energy and could penetrate things that light could not. The love for this new investigative tool united the chemists, biologists, and physicists of the era. X-rays not only revealed the skeletal structure of biological species, but also revealed the beautiful arrangement of atoms in crystals via X-Ray diffraction crystallography.

Ernest Rutherford, who was investigating radioactivity using X-rays, appointed a young Henry Moseley (Harry to his colleagues) in 1910 to work in his lab. Rutherford wanted Harry to explore more about radioactive elements, but Harry’s heart belonged to X-ray spectroscopy. He teamed up with Charles Darwin (grandson of the “Evolution” Darwin) and investigated the nature of X-rays given off by different metals. After working for three years under Rutherford, he suddenly moved back to Oxford, where he was from, and started working independently in a fellow scientist’s lab. 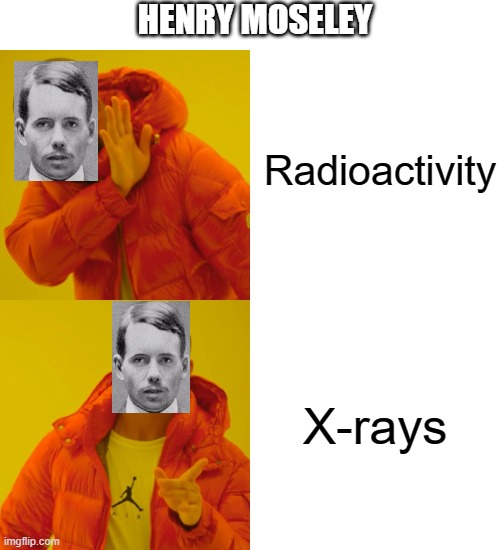 Around this time, a study published by Antonius van den Broek a Dutch economist/amateur scientist caught Harry’s eye. It claimed that elements in the periodic table should be arranged according to the charge in their atomic nucleus, and not according to the atomic weight, as suggested by Dmitri Mendeleev. Harry decided to experimentally test this hypothesis using X-ray spectroscopy.

Moseley’s apparatus would fire a beam of X-rays towards his samples, which were generally pure forms of different elements, and sometimes metal alloys. The samples then emitted secondary X-rays that would hit a photographic plate placed behind it. Harry noticed that every element created a unique series of streaks or spectra upon hitting the photographic plate. He used these spectra to calculate the X-ray frequency of every element he could get his hands on.

His calculations led him to a conclusion that the square root of the frequency of X-rays emitted by an element was proportional to Z-1, where Z represents a whole number equivalent to the charge of the atomic nucleus of an element. Moseley’s law gave rise to the concept of atomic numbers, which eventually led to the rearrangement of the periodic table. (It actually solved many redundancies that had troubled Mendeleev’s first periodic table. 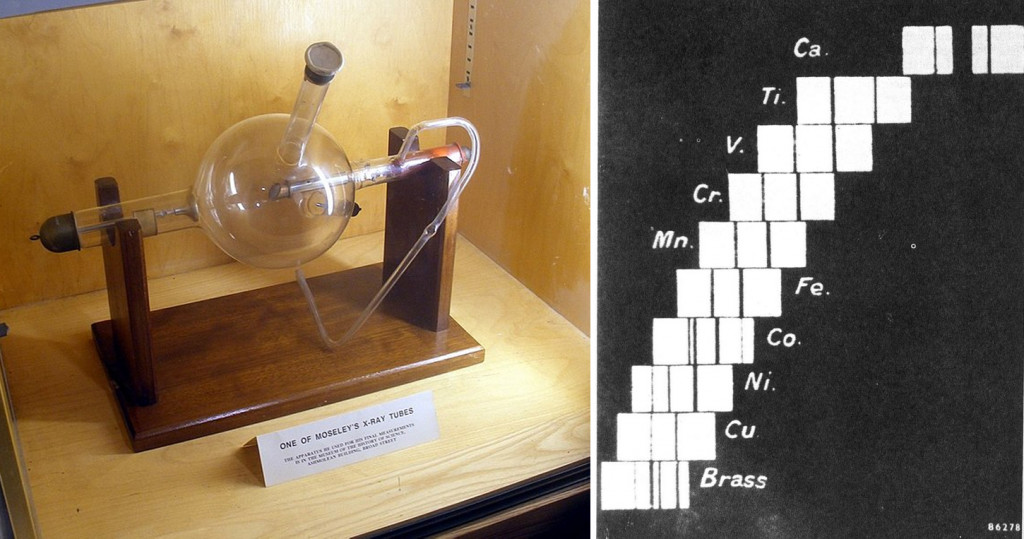 Unfortunately, Harry’s astounding scientific career was cut short when the first world war broke out in 1914. He volunteered to join the army as an engineer and lost his life during the Turkish invasion. Reminiscing on Harry’s work, Ernest Rutherford said that he would have undoubtedly won a Nobel Prize if not for his untimely death.

Also Read: Why Is The Periodic Table Arranged How It Is?

The introduction of quantum mechanics has proven that the unique X-ray spectra were due to quantized electronic transitions and not due to nuclear charge. Yet, Moseley’s experiments in a roundabout way gave us a glimpse of what’s inside an atom, as well as its implications on the outside world.

We can now see what an atom looks like with the help of Scanning Tunneling Microscopes. However, we are still far from a reality where we can dissect an atom in order to look inside and count the number of subatomic particles.  It’s been over a century since Moseley introduced the world to atomic numbers, but it is still shaping the way we manipulate elements and work in the fascinating field of chemistry.