Diamond and graphite are two allotropes of the same element (carbon) and the differences in their properties are a result of the way their crystal structures are arranged. Both diamond and graphite are made of pure carbon, yet they have dramatic differences in their properties. As allotropes of the same element, you might expect them to share many similarities, but that simply isn’t the case.

At first, this question might seem odd to many people. Diamond and graphite… doesn’t sound like a particularly sensible combination. Diamond and gold, or diamond and sapphire would make more sense, right? So, why is diamond pitted in the same category with graphite – the thing that we find inside our pencils?

Well, if you had paid attention to your Chemistry lessons in high school, you would know that there is, in fact, a very strong structural connection between the two.

What’s the connection between the two? And why are they so different from each other?

Allotropy (also referred to as ‘allotropism’) of an element is that element’s ability to exist in multiple forms in the same physical state with a different arrangement of its atoms. The different forms are called allotropes of the given chemical element.

Imagine that you have 36 balls that you can arrange in any number of patterns to obtain mutually-visually geometrical shapes.

The constituent pieces of these shapes (balls) represent atoms, and the different shapes they assume (due to their varied arrangements) are the allotropes.

Allotropes of the same element have different bonding arrangements, which give rise to different chemical and physical properties for the substance. Furthermore, different allotropes can also differ in the occurrence of molecules in the number of atoms.

The following image features various allotropes of phosphorus and oxygen.

In the world of allotropes, the carbon is nothing less than a rockstar. It has the ability to form many allotropes, thanks to its chemical structure. Its atomic number is 6, which means that it has 4 electrons in its valence shell. 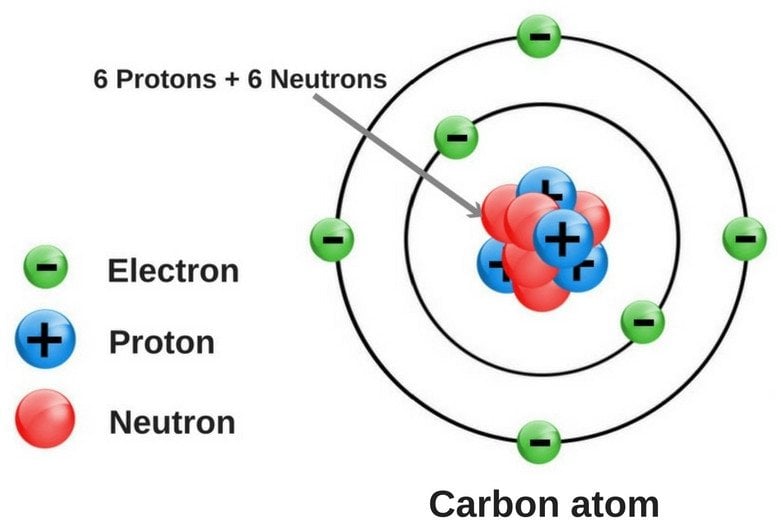 As of now, no less than 8 allotropes of carbon have been identified, and the research for discovering even more allotropes is on. 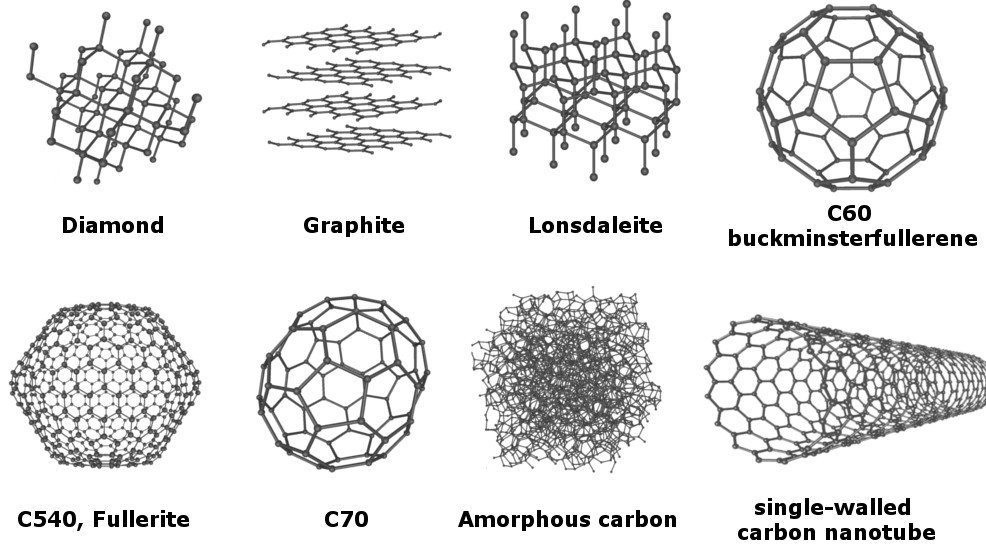 However, out of all the known allotropes, the most popular ones are diamond and graphite. These two allotropes, which visually appear incredibly different, are still made of nothing but carbon. Although their composition is the same, they exhibit different chemical and physical properties, thanks to the arrangement of carbon atoms within them.

Why is diamond hard, but graphite is soft, despite being composed of the same element (carbon)?

It boils down to a single factor: geometry.

The arrangement of carbon atoms in diamond follows a tetrahedral fashion. This means that each carbon atom is attached to 4 other carbon atoms, forming strong covalent bonds.

This crystal arrangement is energetically very favorable and imparts that characteristic strength, durability and rigidity to diamond. To scratch or break it requires a high amount of force, which makes it one of the hardest naturally-occurring materials on the planet.

Graphite, on the other hand, has an entirely different geometric arrangement than diamond. Its carbon atoms are arranged in 2D sheets, whereas each carbon atom is bonded to three other carbon atoms to form hexagonal rings in an infinite array. Although the bonding of atoms within each individual layer is covalent and therefore quite strong (as strong as is seen in diamond), the bonding between layers is weak (Van der Waals forces).

The result of this is that the layers slide over each and can detach from each other very easily. These weak bonds between the multiple sheets of carbon atoms make the graphite used in pencils flake off on paper, allowing you to write. In addition to being soft and slippery, graphite also has a much lower density than diamond.

The one thing about all of this that amazes me most is how a few tweaks in the chemical structure of identical substances make them so massively different in their appearance, toughness and chemical properties!