Fluid particles often adhere to flat and curved surfaces due to a pressure difference that exists between the top and bottom sides of the particles; this tendency to adhere is known as the Coanda Effect.

After revealing the mysteries behind why your shower curtain always tries to get you, today we will expose another of life’s mysteries that affects us all—why is it so hard to pour liquid from a mug without spilling it?

You will likely be shocked to know that one of the phenomena that causes your drink to spill is also thought to be responsible for why an airplane flies. We know the phenomenon as the Coanda Effect, and it explains the adherence of fluids to curved surfaces.

For airplanes, the surrounding air adheres to the wings and generates the lift necessary for flight; while in the case of mugs, the liquid inside clings to the curved mug lip and trickles along its surface, leaving a mess for us to clean up. 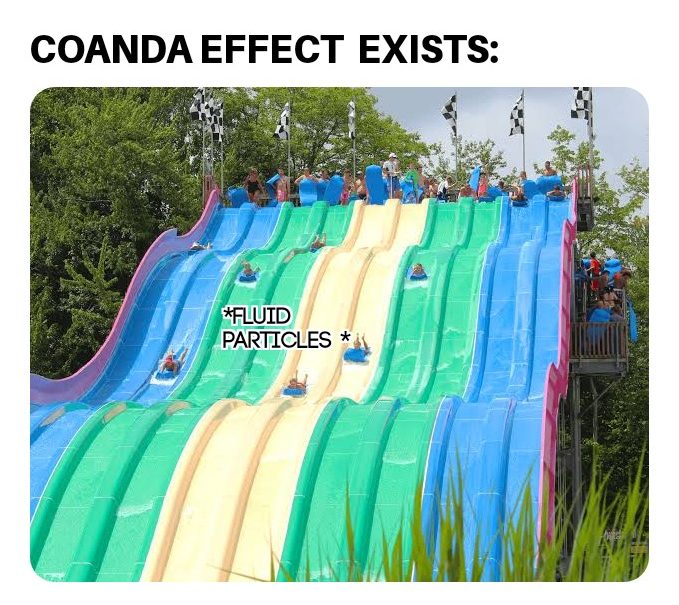 This effect was first identified by Henri Coanda, a Romanian engineer and mathematician. In 1910, young Coanda was testing the Coanda-1910 aircraft, an aircraft he had built, when he stumbled upon the discovery. The aircraft itself didn’t make it off the ground; in fact, the aircraft burst into flame during its warmup. However, it wasn’t all a waste, as Coanda did notice something unusual.

He observed burning gases exiting from the engine flying in close proximity to the body of the aircraft (fuselage). Subsequent experiments and studies finally led him to affirm what we now know as the ‘Coanda Effect’.

Coanda himself described the effect as “the tendency of a jet of fluid emerging from an orifice to follow an adjacent flat or curved surface and to entrain fluid from the surroundings so that a region of lower pressure develops.”

In simpler terms, the Coanda Effect is the tendency of a fluid, such as air or any other liquid, to adhere and flow along flat and curved surfaces.

Bernoulli’s Principle Into The Play

A jet exiting from an orifice sweeps the surrounding air along with it. However, the exiting jet flows at a greater speed than the ambient air, and according to Bernoulli’s Principle, fluids flowing at higher speeds have lower pressure and vice versa. Thus, the low-pressure jet is enclosed by the comparatively high-pressure ambient air. The surrounding air pushes on the jet from both sides, balancing it in the middle.

Coming back to our question, pouring from mugs is difficult for two reasons. First, it is difficult due to the surface tension of the liquid, and second, due to the adhesion of liquid molecules onto the mug surface as a result of the Coanda Effect. While we’ve already discussed the surface tension aspect in detail (Why do liquids sometimes run down the side of the container while pouring?), this isn’t the only culprit at work. 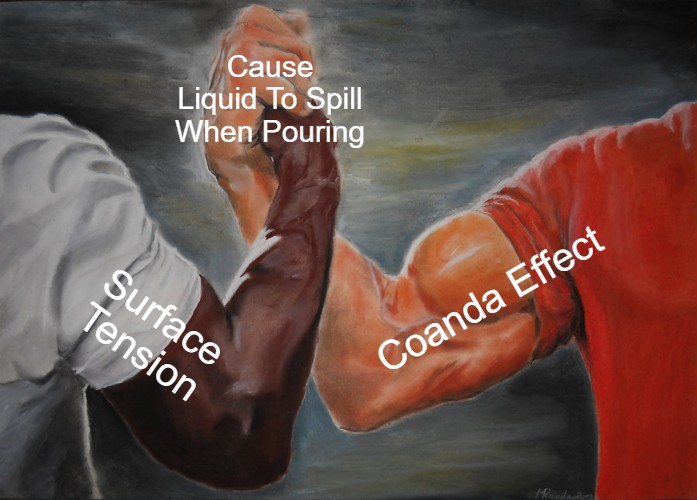 The fluid molecules inside the mug are subject to ambient pressure from the surrounding air. When one pours from a mug, the ambient pressure forces the fluid to adhere to the mug’s surface. The molecules remain stuck, even when the mug surface curves at the lip. To prevent the liquid from dribbling, gravity must overcome both the surface tension of the liquid and the adherence of liquid to the mug surface, due to the Coanda Effect. Nine out of ten times, the combined forces prove too great for gravity to overcome, so liquid dribbles down the mug surface.

The Coanda Effect is also believed to be the reason why an airfoil shape generates lift, although this hasn’t been proved. For the longest time, people believed that airfoils generate lift due to Bernouilli’s Principle, but extensive studies carried out using simulation software argue otherwise.

The hypothesis (also known as the equal-transit theory or longer path theory) assumes that air particles of the upper stream and the lower stream must meet at the tail concurrently. Since the upper and bottom surface of airfoils aren’t uniform, the particles on the upper surface must travel at a greater speed than the lower surface particles to reach the tail at the same time. Aforementioned, according to Bernoulli’s Principle, the speed and pressure of fluid are inversely proportional.

Thus, there is more pressure at the bottom surface than the upper surface, and this difference in pressure generates lift. However, the assumption on which the theory is based, i.e., particles from the bottom and top surface must reach the trailing edge at the same time, has no logical explanation and is considered absurd.

In reality, the particles of the upper streamline reach the tail before the lower streamline particles. Furthermore, the application of Bernouilli’s Principle is limited to two points on the same streamline, not two different streamlines. For these reasons, the equal-transit theory has been disproved.

An illustration of the equal-time theory. (Photo Credit : Wikimedia Commons)

An airfoil is curved on both sides and, as suggested by the Coanda Effect, fluid particles adhere to curved surfaces. This adherence forces the airflow downwards. For the flow to adhere, there must be more pressure at the top of the particle than the bottom. This also creates a pressure difference on opposite sides of the airfoil, which produces lift. Also, according to Newton’s third law, the downward flow (action) produces an upward force (reaction) in the form of lift.

Apart from lift generation in aircrafts, other applications of the Coanda Effect include hydropower screening, oscillatory flowmeters, in air conditioning, etc. The effect also finds applications in the fields of metrology, automobiles and medicine. In automobiles, the effect is primarily used by F1 car manufacturers to keep exhaust gases at bay, as well as in certain fluid dispensers, whereas in medicine, the effect appears in ventilators and helps us better understand mitral regurgitation of the human heart.

However, the Coanda Effect isn’t universal, and only applies when the curvature of a surface isn’t very sharp. Thus, to avoid spilling your drink, pour swiftly while keeping the mug at a greater angle to the horizontal plane!