Shower curtains are drawn in towards your body because of the pressure difference in air thats exists on opposite sides of the curtain.

Has your shower curtain ever tried to kill you?

Perhaps that’s an exaggeration, but I’m talking about the times when you’ve stepped in to take a nice, warm shower, but a couple seconds later, your shower curtain tries to cling on to your skin! It’s one of those mysterious things that no one seems capable of avoiding or understanding—not even scientists! Regardless of whether it is a warm shower or a cold shower, the curtain always drifts in towards you. So… why does this strange thing happen? 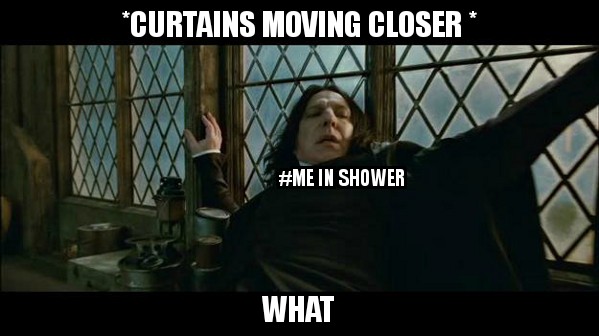 No one really knows why the shower curtain effect occurs.

Let’s discuss some of these theories and get to the bottom of why our shower curtains appear to be trying to kill us.

Theory #1 – The difference in air densities

At the top, the excited atoms of the warm air exit from the space between the ceiling and the shower hanger. This creates a region of low air pressure on the inside. The outside air, which is at a relatively higher pressure, accelerates towards the low-pressure region from the bottom of the curtain; dragging the curtain along with it. 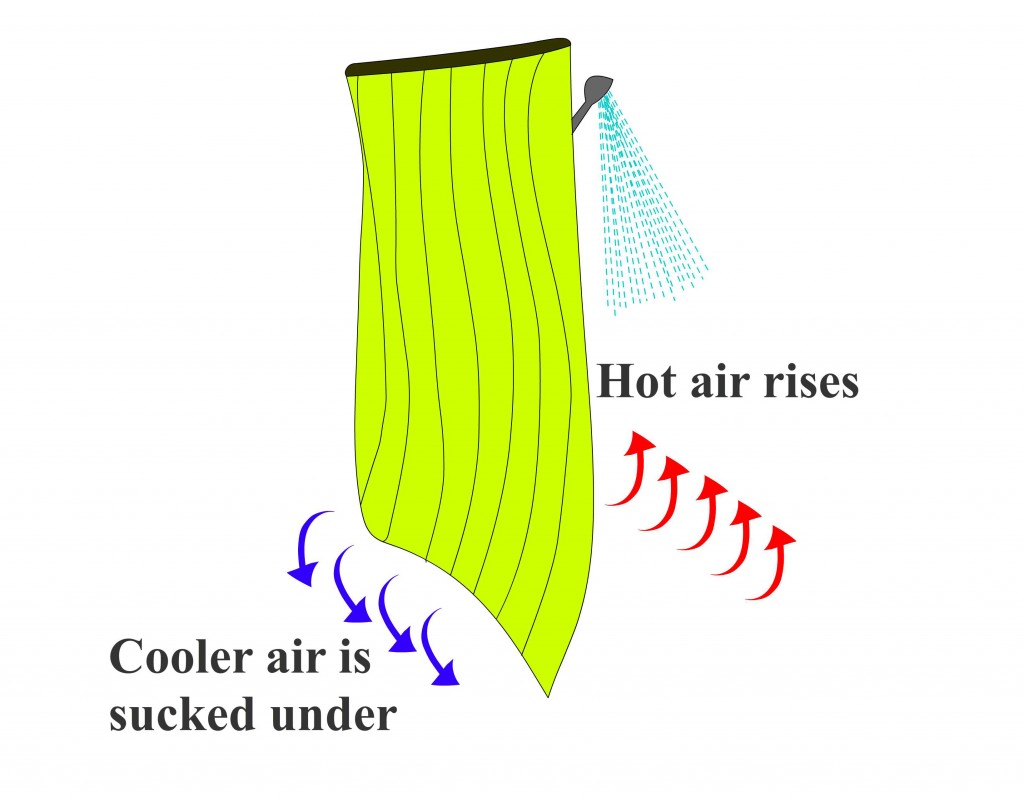 This movement of air from the outside high-pressure region to replace the warm air that exited, thus creating a low-pressure region on the inside, is believed by many to cause the shower curtain effect.

However, this explanation falls short when trying to explain why the shower curtain is still drawn towards you when taking a cold shower!

This next theory claims that the shower curtain’s clinginess towards you is because of Bernoulli’s principle. Bernoulli’s principle relates the change in the velocity of a fluid with changes in pressure. The principle states, ‘An increase in the velocity of fluid happens concurrently with a decrease in fluid pressure and vice versa’. Some prime examples of the principle in action are the flow of fluids through nozzles, the generation of lift by airplane wings, the spin achieved on baseballs and footballs, etc.

For the shower curtain effect, the theory is applied by assuming that the water gushing out of the shower head accelerates the air molecules that it cuts through. As per Bernoulli’s principle, this increase in the velocity of air molecules is accompanied by a decrease in air pressure. However, the velocity and pressure of air on the outside surface of the curtain remain the same. A pressure difference is therefore established on opposite sides of the curtain.

Similar to the previous theory, the pressure difference causes the shower curtain to move inwards, towards the low-pressure region. 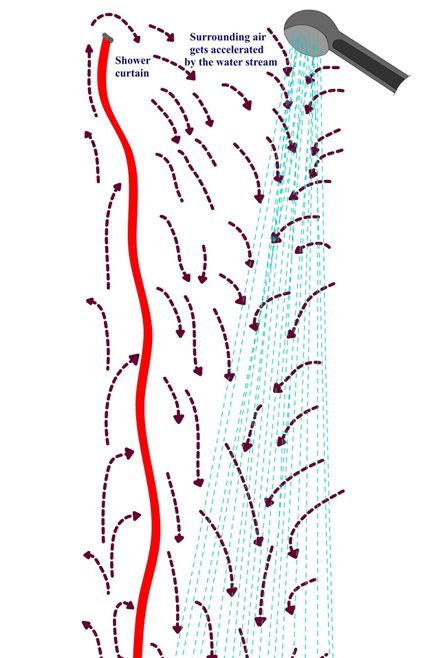 Hold on though. With every assumption comes a few exceptions.

Bernoulli’s principle is only applicable to isentropic flows (flows that are both adiabatic and reversible in nature), but not droplets, so this explanation for the shower curtain effect is certainly debatable.

Theory #3 – Due to a horizontal vortex

Now, let’s take a look at the final and only theory with a strong basis. The theory comes from David Schmidt, whose work back in the day revolved around sprays and how they behave upon being discharged from openings, such as fuel injectors. To study sprays and their behavior, David made use of computer simulations.

The theory starts by considering the shower as a huge spray, which it is! Schmidt created a 3D model of a standard shower and also considered many of the minor details. He included a shower tub, the curtain rod, the rest of the room outside the shower area, the shower head, etc.

David then ran a simulation on his modeled bathroom for about 2 weeks. The simulation results revealed that the spray from the shower resulted in the production of a horizontal vortex. A vortex is a mass of fluid that revolves around a center axis line. Tornadoes and cyclones are examples of naturally occurring vortices (plural form of vortex). 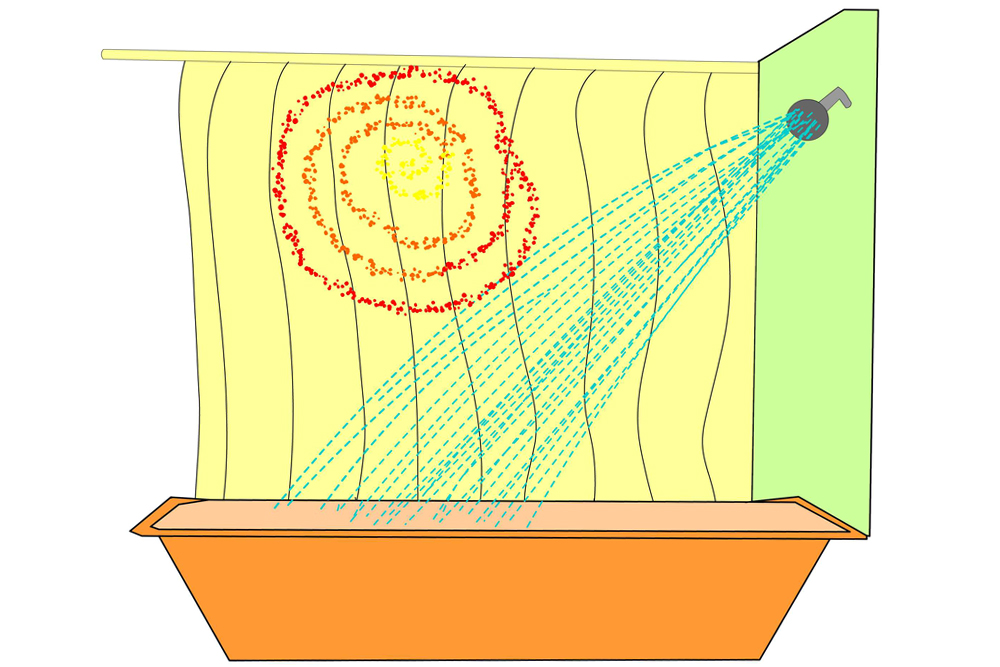 The center, also known as the eye of the vortex, is a low-pressure region. This is part of the reason why objects and even people can get sucked up in a cyclone.

Coming back to the simulation results, the axis of the vortex created by the spraying water is perpendicular to the curtain surface. The low pressure of the vortex eye draws the shower curtain in.

If you’re still curious and want to see the vortex in action, just follow the words of David himself.

“Anyone can test my model. The best way to see it is to turn on the shower – cold water will do fine. Use a light, thin shower curtain and a strong shower head. Stand outside the shower, stick your head in, and blow in smoke. You will see how the vortex is driven by the water droplets.”

All three theories make a common argument, namely that the movement of the shower curtain is due to the pressure difference that exists between the inner and outer surface of the curtain. However, the reason behind the creation of a low-pressure area inside the shower is what differentiates these theories. As mentioned, David Schmidt was awarded the Ig Nobel prize for his theory, which is a parody of the acclaimed Nobel Prize and is awarded to researchers that first make people laugh, and then make them think!

What’s good to know is that the suction pressure of the vortex is pretty low and insufficient to attract heavier curtains. So, if you’re exhausted by the clinginess of your shower curtain, consider switching to heavier curtains or, instead of closing the curtain altogether, leave a little gap on one side. Other solutions include replacing the shower head with an alternative that doesn’t atomize water as much or find a way to reduce the water pressure.