There are no clear answers. If the problem is acne or cyclic vomiting syndrome, a hot water shower is the right choice. For eczema, avoid hot water at all costs. Cold water, on the other hand, can have a positive effect on blood flow, nerve conductance, and the skin.

Both hot and cold showers alter the thermal equilibrium of the body, known as homeostasis.  Humans are warm-blooded, which means that our bodies are only comfortable in a narrow range around 37℃ (98℉). Anything more than this is a fever, and anything less brings us closer to hypothermia. The body tries very hard to make sure our temperature does not change very much. What Can Cold Showers Do?

Although it may feel like the bane of your existence, a cold shower can actually have massive health benefits. Don’t believe me? Just ask the Egyptian, Indian and Chinese cultures, where water was used as therapy for illnesses. Hydrotherapy is the use of water either internally or externally to try to relieve various symptoms. Hydrotherapy is used even now for a variety of things, such as mobility training in people with disabilities (Photo Credit : Jordi Mora/Shutterstock)

Cold water has long been used in hydrotherapy, and recent research suggests that it can have massive effects on the circulatory system. Temperatures of 32, 24 and 14℃ lowers heart rate and blood pressure, but increases metabolic rate.

When the surface of the skin is very cold, the body stops sending blood there to prevent the body from losing too much heat. This increases circulation in deeper tissues. To prevent blood from traveling too close to the surface, heart rate and blood pressure must consequently reduce. In order to maintain internal temperature, the body burns more energy, thus raising the metabolic rate.

Sudden cold can also shock the nervous system. The same temperature range of 32, 24 and 14℃ lowered nerve conductivity. This means electrical impulses in the nerves traveled more slowly. Slowing the nerves can actually have a soothing effect, meaning that a cold bath can be very beneficial for people with anxiety, or for anyone who wants to calm down a bit!

Experiments prior to the study above in 2014 also suggested that very cold water can reduce immune function. However, any effect that had would be temporary. As soon as the body returns to its normal temperature, the immune system would be just as active. Recent experiments suggest that there is no suppression of the immune system at all when exposed to cold water!

Anecdotal evidence suggests that cold water can aid in muscle recovery. However, the results from scientific experiments have been conflicting, and there is no official verdict yet. One study found that cold water reduces blood flow, but not muscle temperature, after exercise. What this means remains unclear.

One thing that dermatologists and scientists agree on is the benefit of cold water for your skin.

Our skin is covered by a thin layer of oil called sebum. We have sebum all over our bodies, but when sebum accumulates, it can cause pimples and congestion. Without sebum, our skin would be dry, and we would lose a lot of water through the skin. Hot water can strip the sebum off the skin, thus irritating it. Those with conditions such as eczema or skin allergies should avoid hot water in most cases. Cold water can also reduce the feeling of itchiness associated with eczema and rashes.

Also Read: How Many Times Should We Shower In A Day? A cross section of the surface of our skin. The sebaceous gland produces sebum. (Photo Credit : Di-Art/Shutterstock)

Cold water can have an effect on blood flow, nerve conductance, and the skin, but how does it stack up against hot water?

What Can Hot Showers Do?

First and foremost, a dangerously hot shower is bad for you on a number of levels. A study conducted in the United Kingdom found that across 8 years, fifty-seven patients were admitted who had sustained burns that required hospitalization. Of these fifty-seven, nine patients died. Superficial burns caused by too-hot showers and subsequent infections are indeed a major risk of very hot showers.

On the other hand, hot showers can help control bacteria. Bacterial diversity (the number of types of bacteria) and the bacterial population (the total number of bacteria) was significantly lower in hot water taps than cold water taps. This means that hot water has a sterilizing effect, killing the bacteria present in the taps. This study looked at drinking water, so it’s unclear if this has any real consequences when it comes to showering. A drop of water can have many types of bacteria, but not all are dangerous. (Photo Credit : Christos Georghiou/Shutterstock)

Even outside of these very specific situations, hot water does have its benefits. Hot water relaxes us, even if it doesn’t have the same effect on our nervous systems as cold water. It can improve sleep for this reason. Although our pores do not open and close like windows, hot water can break down bonds between sebum and dirt, which can prevent acne for people with congested skin.

Unfortunately, the answer for whether to take a hot or a cold shower isn’t clear, as it depends entirely on who you are. It turns out that everyone’s preferences are valid, at least scientifically. 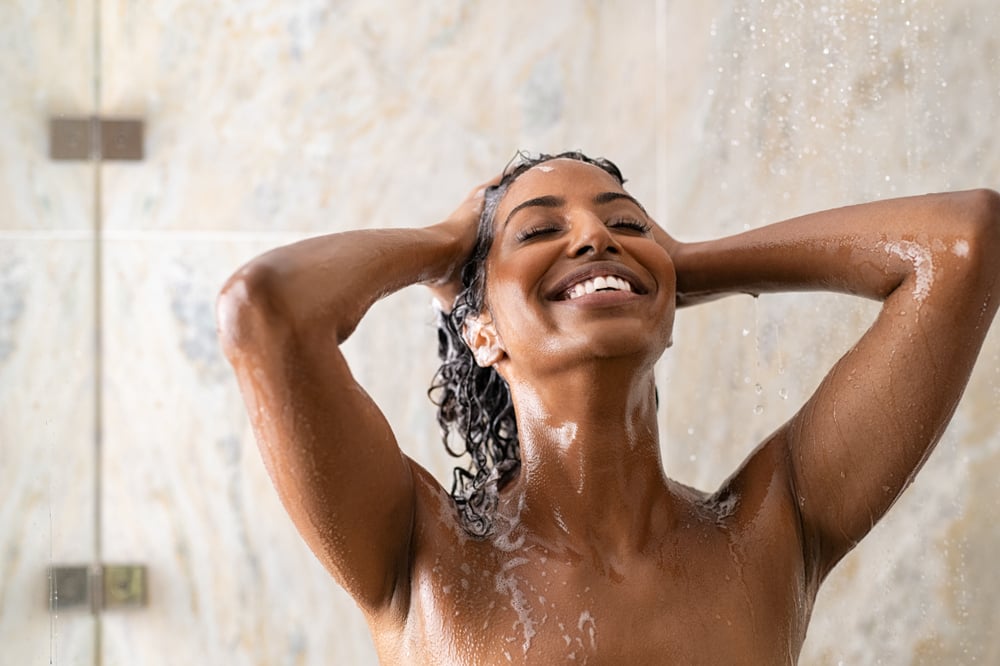 If your problem is acne, heart failure, cyclic vomiting syndrome or something else, a hot water shower is the right choice. For eczema, avoid hot water whenever possible.

Whatever your choices are, the important takeaway is to never veer to the extreme. Very very hot water can burn skin to the point of needing a hospital visit, while a very long and very cold shower can shock your body into hypothermia. Although our bodies are excellent at maintaining thermal equilibrium, pushing them too far outside the equilibrium range can be dangerous.

Lukewarm, or anything nearby, should be just fine!