The Earth will face multiple stresses, including the extinction of various species, if all coral reefs die.

Ever thought about the number and types of creatures supported by planet Earth? Apart from 7.8 billion Homo sapiens, there are so many types of animals—tiny insects, free-flying birds, creepy reptiles, water-dwelling fish, and a vast class of mammals ranging from large scary carnivores to small cute pets. Not only this, but there are also innumerable types of plants, from those bearing fragrant flowers to those that devour insects. And let’s not forget the billions and billions of organisms we cannot even see—bacteria, certain fungi, viruses, and everything in between.

Out of these, a meager 1.2 million types or species have been discovered. Additionally, most of those we have found live on land. If you’re thinking of embarking upon the mighty task of discovering every type of organism inhabiting this blue planet, it could take you more than a thousand years! And in that time, countless new organisms will have evolved.

What is a Coral Reef?

If you’ve heard about the ‘Great Barrier Reef’ of Australia, you might have some idea of what a coral reef is. However, if you think it’s some kind of a sea rock or plant, you’re mistaken. 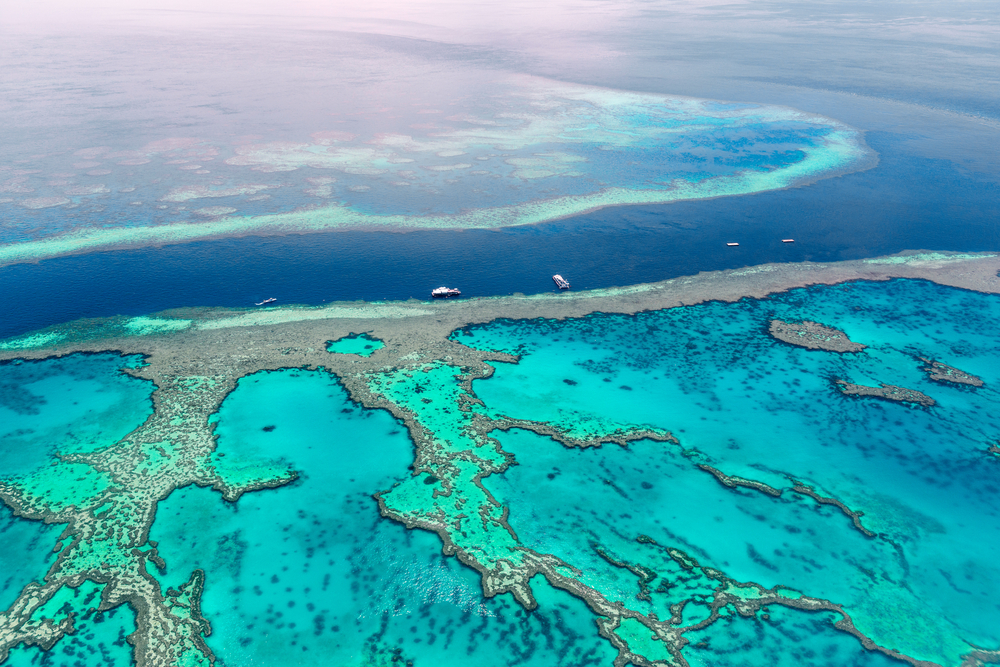 So what is this sprawling “creature”?

A coral is a marine invertebrate related to the sea anemone. It has a cylindrical body with tentacles that give it the name – ‘coral polyp’.

There are two kinds of corals—hard and soft.

Hard ones are those that absorb the freely available calcium from the ocean and produce their own calcium carbonate shells. Soft corals don’t possess any such structure. It is because of this shell formation that only hard coral polyps have the ability to create massive coral reefs.

Coral polyps have a habit of living in colonies, so there are always many polyps living in close proximity. As and when the polyps die, they leave behind their limestone shells. Layers of shells keep on building on top of each other until the original small colony is transformed into a coral reef.

Coral polyps are not lone survivors. They have a symbiotic relationship with microscopic algae called zooxanthellae. Zooxanthellae take it upon themselves to generate food for their host through photosynthesis. In return, the host polyp provides its guest algae with protection in its calcareous shell. 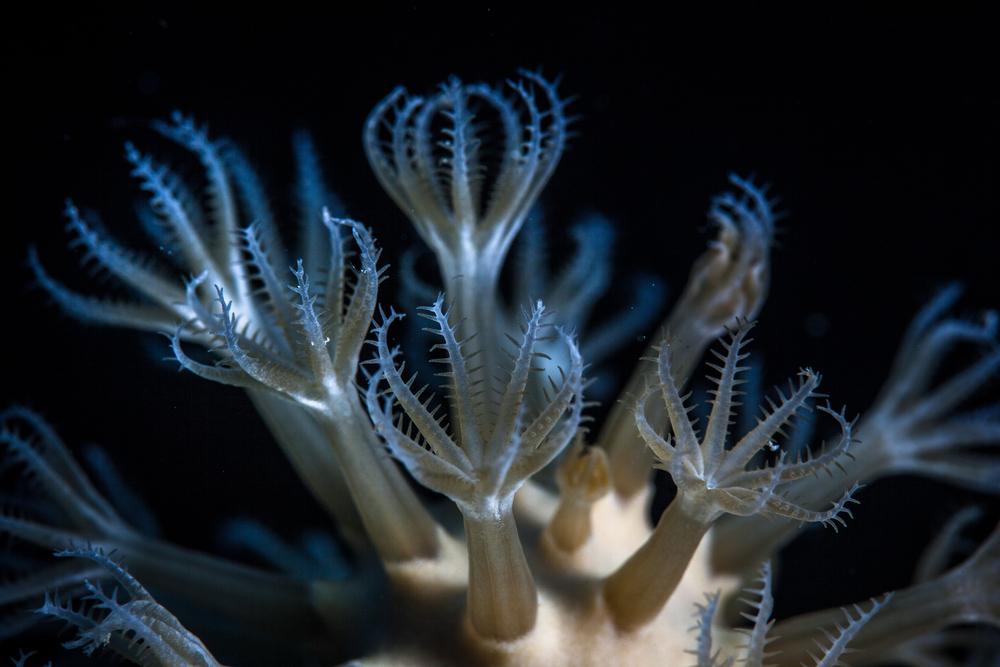 In fact, corals are considerate enough to live near the ocean surface so that zooxanthellae get enough sunlight to photosynthesize. Also, since zooxanthellae occur in various colors, it imparts the same color to the coral!

If all the conditions are favorable, coral polyps can grow in very large numbers. Sometimes these structures expand to such a level that they end up forming an island! 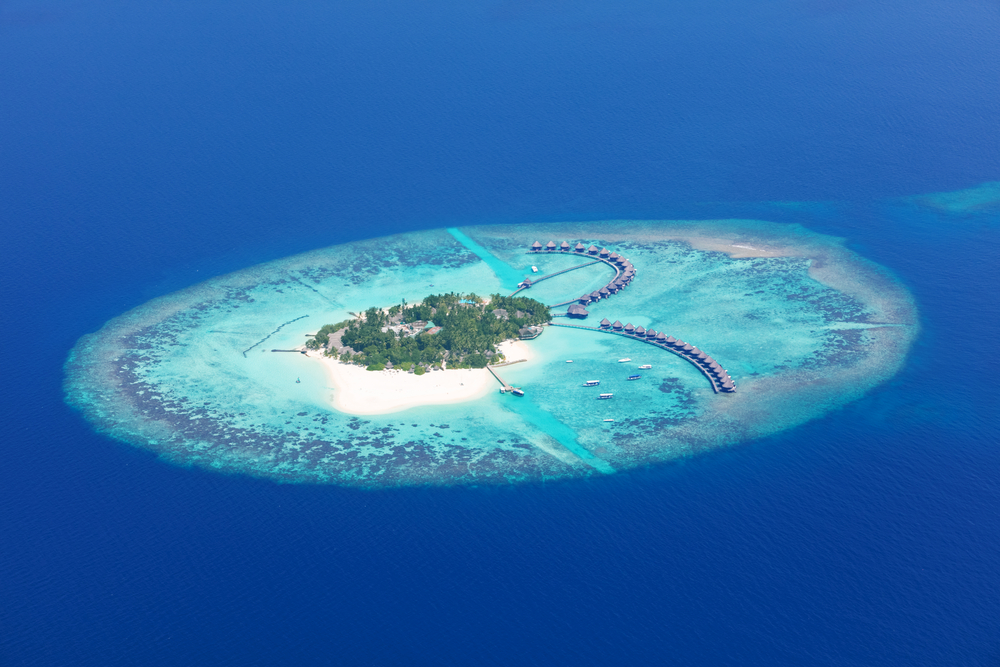 This happens when coral reefs grow around a volcano in the middle of the ocean. Over time, as the water continues to erode the volcano, it sinks. Even when it is completely submerged, the reef keeps growing. As sand particles get deposited on the reef, and as the magma from the volcano solidifies, it gives rise to a whole new island. Many islands of the Maldives, the American Howland Islands and the Lakshadweep group of islands of India are all coral islands.

However, this is not what is most special about coral reefs. How these tiny creatures support life all around the globe signifies their true stature and importance.

Coral reefs are unique, as they are the sole providers for a number of organisms. There is no surprise why they have been given the name ‘rainforests of the sea.’

One-quarter of all living marine creatures depend on these minute colony-forming creatures. Some need them for food, whereas some look for shelter in their calcareous shells. And remember, these reefs occupy less than 1% of the total ocean floor and an even smaller proportion of Earth’s total surface!

For instance, the Northwest Hawaiian Island coral reefs alone support a variety of mammals, birds, plants, and more than 7,000 species of fish and other sea organisms.

Despite occurring in very few locations and in limited numbers, 25% of all fish in the sea love living around coral reefs. Even the Yellow Tang, which many people keep as pets, breeds around coral and is therefore called a coral fish. When living in the ocean, it feeds on turf algae and keeps the ecosystem clean. In return, the corals provide it with a place to hide from large carnivorous fish species.

Human beings also reap a number of the benefits that a coral reef ecosystem provides.

Many commercially important fish, like snapper and grouper, depend on coral reefs for their survival. Even lobsters can be found dwelling around these reef systems. This makes coral reefs important landmarks for fishermen and the food processing industry. More than a billion people on our planet rely on coral fish for food. In the US alone, the value of commercial and recreational reef fisheries is a whopping $100 million.

The reefs are equally important for those associated with the tourism industry. According to an estimate, 60% of the income generated in Hawaii through tourism is from reef tourists.

Not only this, but coral reefs have also been used as sources of numerous medicines that help in the treatment of cancer, heart disease, and Alzheimer’s. For example, extracts found on the Caribbean reef system were used in the development of an anti-cancer agent called Ara-C, which is one of the first medicines derived from coral reefs. 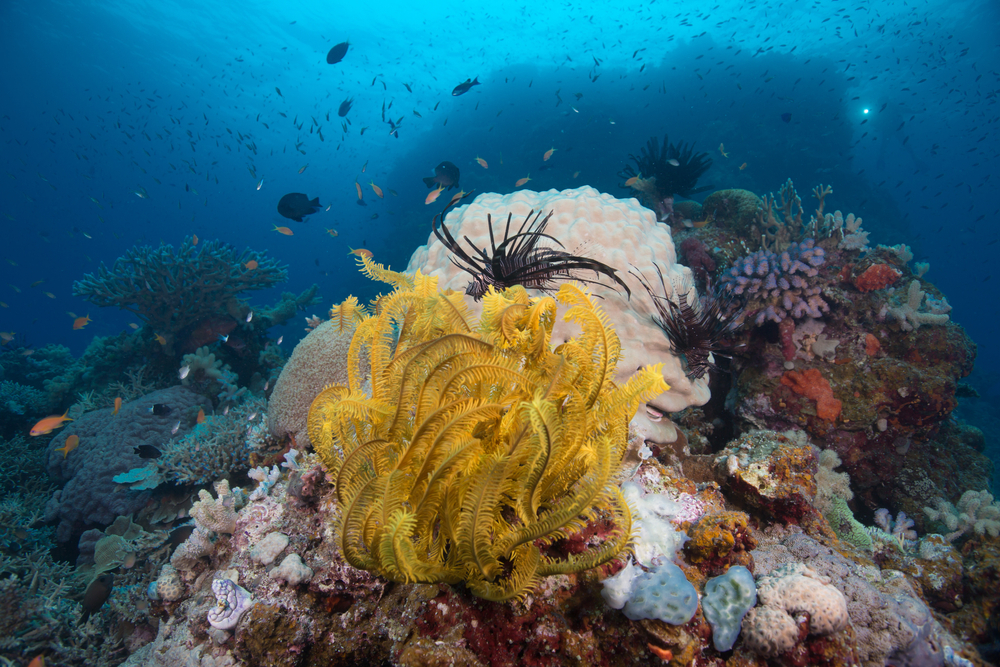 Coral reefs do not save our lives purely through their medicinal virtue; 80% of the oxygen consumed by humans comes from the oceans, and the reefs certainly play a major role in that atmospheric output.

Clearly, coral reefs are of great significance, and critical for the sustenance of nearly all creatures on this planet.

Are they in Danger?

Coral reefs today are facing extreme pressure and threat. The loss of coral reefs can be natural or anthropogenic. Natural causes include disease and tidal fluctuations, which expose the corals to direct sunlight. However, the accelerated decline of coral reefs is primarily due to anthropogenic (man-made) causes.

The majority of coral reefs occur in tropical and sub-tropical regions, as they can only survive in a narrow temperature margin of 22-29°C. Tragically, with rising global temperatures due to global warming, the reef is facing immense pressure.

High temperature conditions cause coral polyps to expel zooxanthellae and end their symbiotic relationship. This phenomenon is called coral bleaching. Bleached corals appear white in color and slowly begin to die, as their food source is gone. 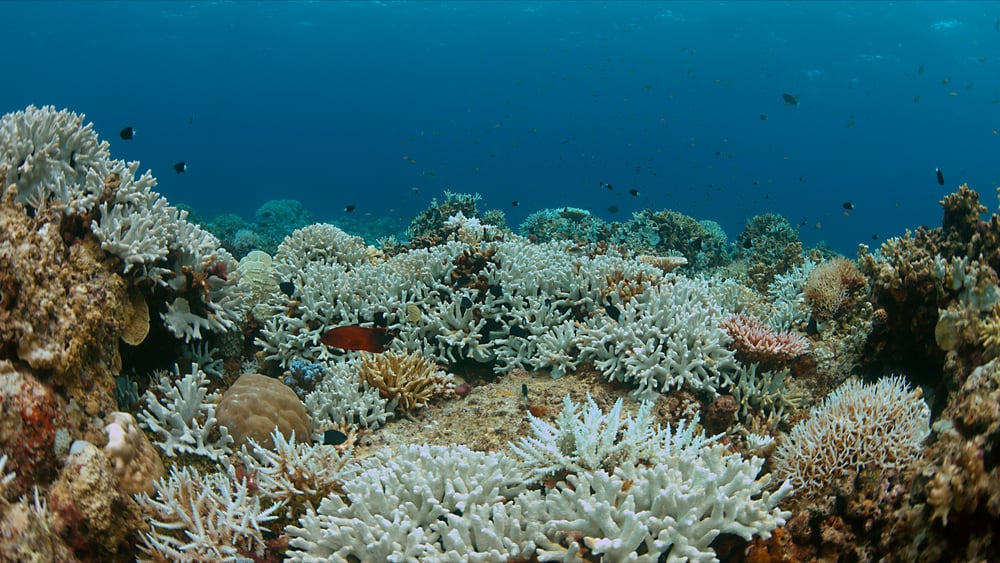 The major cause behind rising sea temperatures is the burning of fossil fuels, but that’s not it! Fossil fuels are also responsible for causing a significant rise in carbon dioxide levels. As early as 2007, the carbon dioxide level in the atmosphere was 380 ppm, which was much higher than the maximum limit. It is now as high as 410 ppm!

Oceans are carbon dioxide sinks, meaning that they absorb excess concentrations from the atmosphere. Carbon dioxide combines with ocean water to form carbonic acid, a process called ocean acidification. The greater the amount of acid in the ocean, the lesser the number of carbonate ions. Thus, with lost carbonate ions, the corals lose their source of forming calcium carbonate shells, which quickly leads to the loss of coral reefs.

Apart from these processes, other human activities like excessive fishing, oil spills or poor techniques of waste disposal are additionally responsible for the degradation of coral reefs.

What if all of them disappear?

Coral reefs don’t develop in a day, a month, or even a year. They are rather slow-growing creatures. Coral reefs grow at a rate of approximately 15 cm per year. The colossal Great Barrier Reef that we see today has been building for 20,000 years!

The disappearance of coral reefs from our planet could lead to a domino effect of mass destruction. Many marine species will vanish after their only source of food disappears forever. Parrotfish, a bright fish with a large beak, spend their entire day chewing coral and lazing around them. It might have to search for a new replacement, along with thousands of other species.

Several other species, like pygmy seahorses, will face a greater threat of large carnivores, as there will be hardly anywhere to hide from predators.

The danger looms large for humans too. There might be an acute food crisis in coastal regions, as a number of fish begin to die off. The health industry will also face extreme stress, as a major source of life-saving drugs will be lost.

Climate change and bleached coral will make coral-based tourism unappealing or nonexistent, which will lead to job losses. Developing countries and small island countries like Tuvalu will be most affected by such drastic shifts. 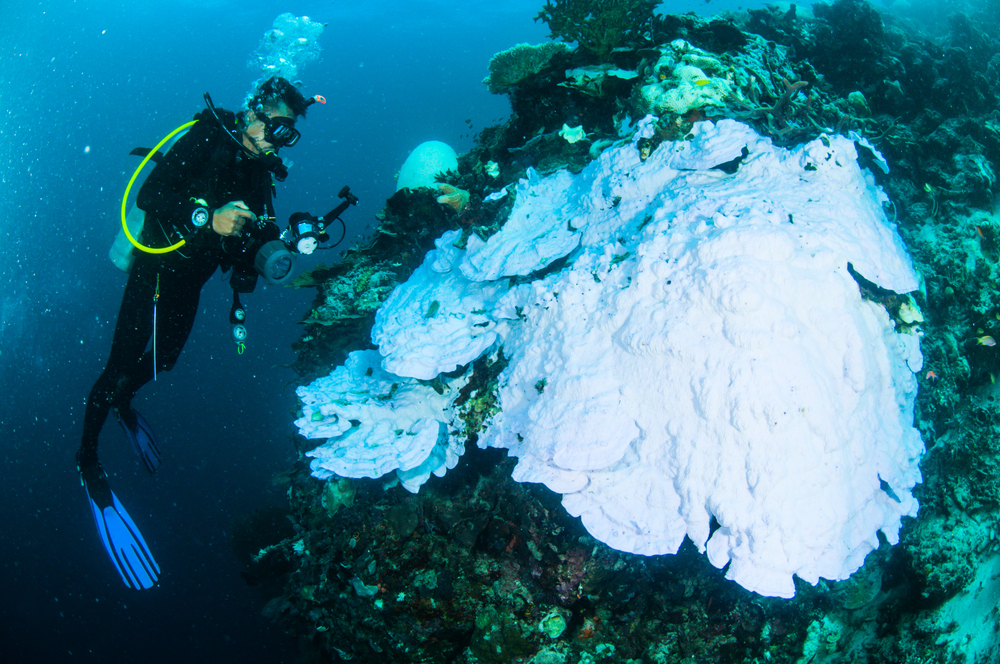 Coral Reefs around the World are under Stress (Photo Credit : fenkieandreas/Shutterstock)

Coral reefs provide protection against flooding and the erosion of coastlines. With them gone, there will be rapid erosion of coastlines and many small island countries might even vanish from the world map. There may be many more serious repercussions that we are unable to perceive at this moment.

The most surprising part is that this is not a hypothetical scenario or just a figment of our imagination. The threat is real. According to the Intergovernmental Panel on Climate Change, a meager 1.5°C rise in global temperature can lead to the extinction of 70-90% of coral reefs around the globe. This number could go as high as 99% if global temperature rises by 2°C.

With a good portion of global reefs already lost, it’s now about saving what remains.

A number of initiatives, like the International Coral Reef Initiative, have been taken up by world bodies and governments across the globe for the better protection of coral reefs. However, every such effort will be in vain until each and every human being is ready to collaborate and address this crisis head-on.

This is not just about coral reefs. Howsoever insignificant a species might appear, even if one goes extinct, it can lead to serious disruptions in the food chain across the globe. With that in mind, all of us should take responsibility not only for providing a better future for ourselves, but also for every other creature that calls this planet home. 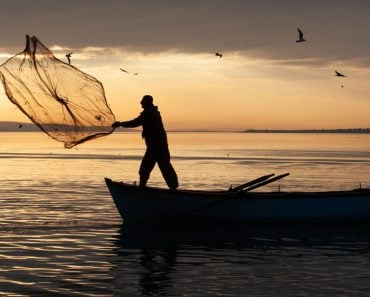