The sky is blue because the Earth’s atmosphere scatters sunlight in all directions and blue light is scattered more than other colors because it travels as shorter, smaller waves.

The brain is wider than the sky writes Emily Dickinson in one of her nameless poems. Cherished for her sublime brevity, the choice of her words is neither excessive, nor too scant to leave one unsatisfied. The right words always limn the most vivid of pictures. Consider how her comparison immediately draws a capacious sky, a sky beaming with blue.

The blue sky is traversed by a disk of blinding luminosity that radiates yellow at the start of its climb, white at the summit and a viscous blend of blood red and orange when it finally sets. The disk often hides behind achromatic clouds irregularly blotched across the sky. Like the end of a thick brush, the disk glides across and paints the entire sky with its changing hues. Except for the clouds, which maintain their achromaticity. 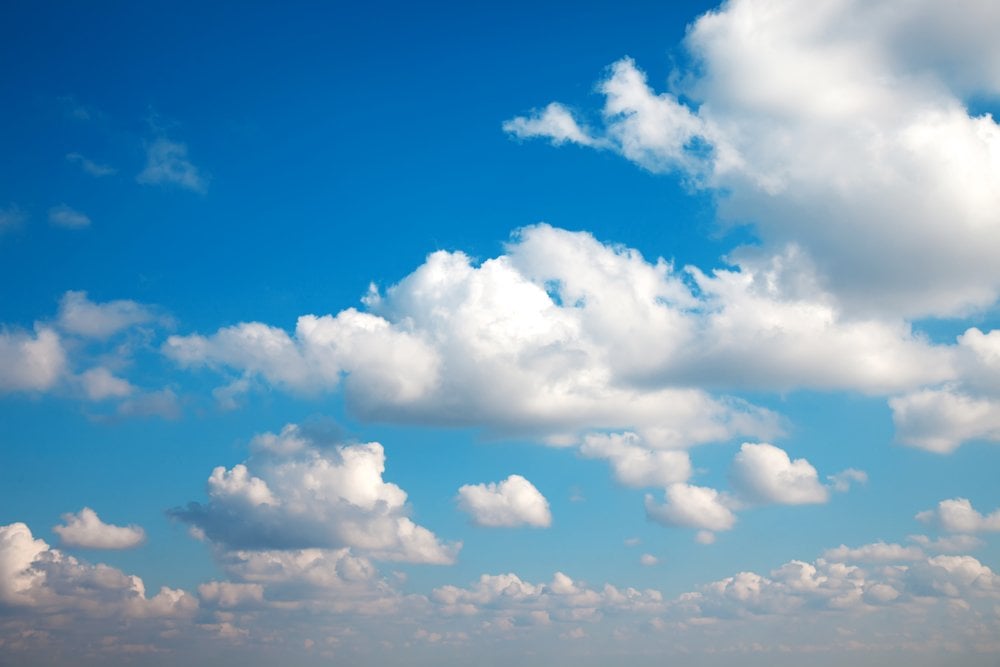 The most obvious of questions arises — why are these elements of nature colored in this particular way? Let’s cut to the chase and immediately inquire what physical mechanism led to this convention? The celebrated mechanism is known as Rayleigh scattering.

The mechanism that renders the sky blue can be demonstrated by a simple experiment. If one were to flash a light on a tank full of water harboring a large population of tiny particles suspended in mid-air, one would observe that the water looks blue when the apparatus is viewed from the side and slightly red when viewed directly from one end. This effect is known as the Tyndall effect.

John Tyndall was the first person to investigate why the sky is blue. He realized in 1859 that light projected on a medium is scattered in every direction by minute particles floating in it. However, physicists credit the answer to this query to Lord Rayleigh, for it was he who studied it in more detail a few years after Tyndall made his discovery. 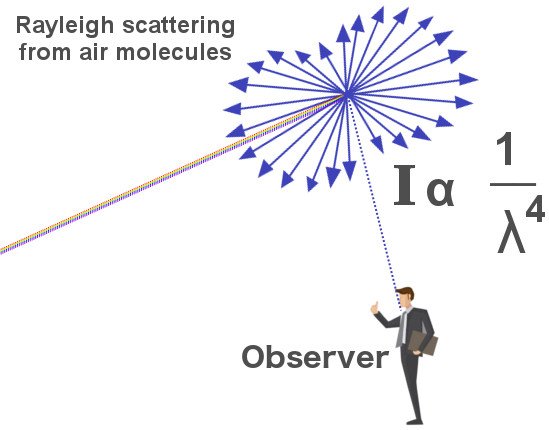 The scattering of wavelengths by particles in this manner is fairly common knowledge. However, there exists a misconception regarding the entities that scatter them. A large share of people falsely assume and promulgate that this scattering is performed by gas or dust particles. Even Rayleigh and Tyndall were seduced by this belief. This, however, is not true. The interaction of light and particles can either cause the former to reflect, bend, as a prism does, or scatter it haphazardly. We know that the sky’s blue is caused by scattering, Rayleigh scattering, in particular.

However, Rayleigh scattering can occur if and only if the size of the particles that light collides with are comparable or smaller than its wavelength. Dust or gas particles, natural or otherwise, are greater in size. In fact, if dust particles were the true conspirers, then the sky’s color would continually vary with the weather. It was Einstein who subsequently discovered that molecules were responsible for such a scattering of light. It is their dipole moments induced by the interaction with an EM field that scatters these wavelengths. Scientists have now narrowed down the species of molecules to nitrogen and oxygen.

However, the sky betrays its blue and assumes a plush red when the sun sets. This is because the light from the sun is required to travel a longer distance when it is close to the horizon than when it is directly above us. This impels the light to travel through more air, causing it to collide with more and more particles, such that all the blue is scattered away; all that is left behind are the wavelengths congenial to red. Consequently, the red, orange and yellow pass straight through to our eye. 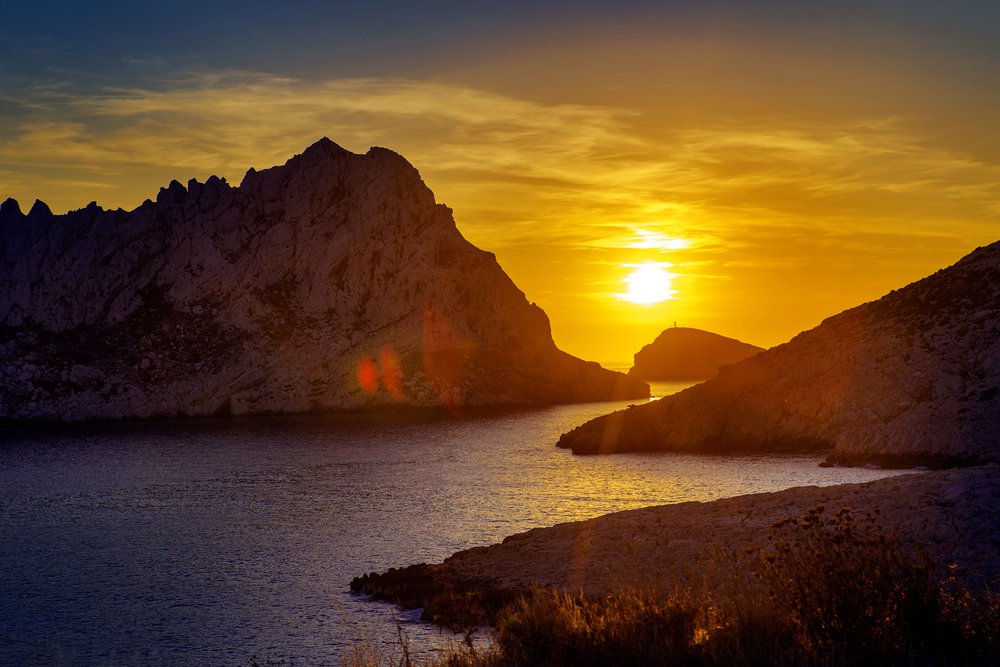 Sunsets above seas are often orange due to the salt particles suspended in the air above them. Credits: Diana Savich/Shutterstock

As for the paleness of clouds, they persist to be covered in shades of grey as their constituent particles, which are larger than the wavelength of light, experience a different type of scattering. This phenomenon scatters every wavelength of light equally, reflecting shades from cotton white to introspective grey. Scattering is also witnessed on Mars, where the sky is often entirely red. This is due to the glut of iron in its air heavily dispersed in dust storms.

However, one would be mistaken to generalize from the pictures and assume that Mars’ sky is constantly red. Occasionally, in the absence of storms, the Martian sky is colored a certain blue, one that is darker than the blue of our sky, for its atmosphere is thinner than ours.

All being said and done, one question seems yet to be answered. If the shorter wavelengths are scattered more vehemently, then shouldn’t violet – the shortest wavelength in the visible spectrum – be scattered the most?

Perhaps to your astonishment, the sky is tainted with some indigo and violet. In fact, if it weren’t, the sky would appear blue with a hint of green! The reason why these colors cannot be perceived has to do with how we perceive colors itself. The human eye detects color with the help of three receptors, known as cones. Each receptor responds to one primary color – red, green and blue. 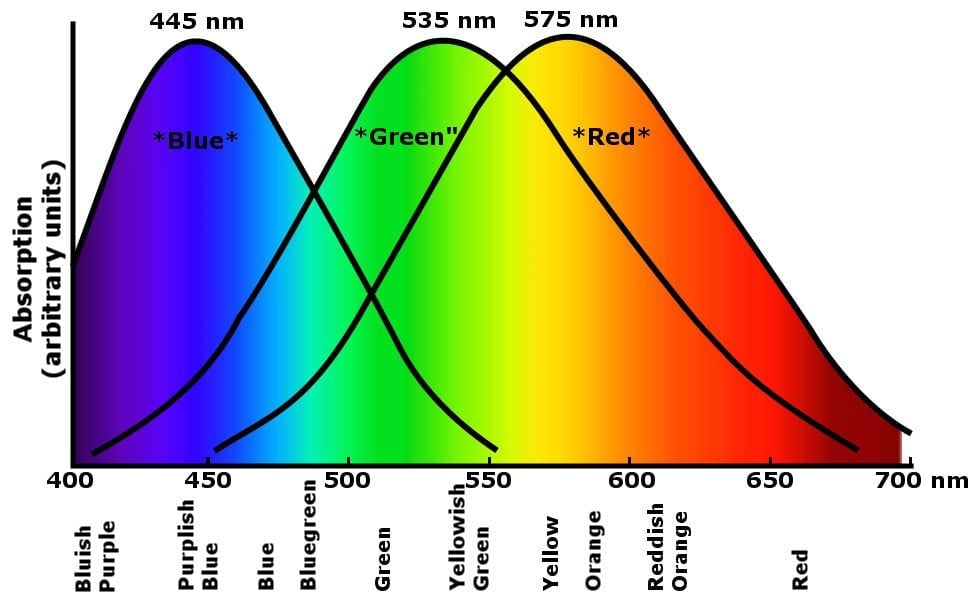 The cones are clustered such that the wavelengths overlap and combine with each other asymmetrically to produce the plethora of different colors that we find around us.

The visual system isn’t like a coin sorter, where each wavelength separates and gets collected by a cone. The cones are clustered such that the wavelengths overlap and combine with each other asymmetrically to produce the plethora of different colors that we see around us. In fact, the three primary colors are all that a television requires to simulate the exquisite shades and perceptions of depth that we observe in reality!

When we turn our gaze to the sky, the red cone is stimulated by the red, yellow and orange wavelengths, the green cone responds to some yellow and strongly scattered green-blue wavelengths, and finally, the blue cone feeds on the most abundantly scattered wavelengths of blue. However, because the stimulation isn’t absolute, but disproportionate, indigo and violet simultaneously probe the blue and the red cone as well. The net effect is that these colors “fade away”, rendering the sky pale blue with a tinge of red.

Also Read: What Is The Tyndall Effect? 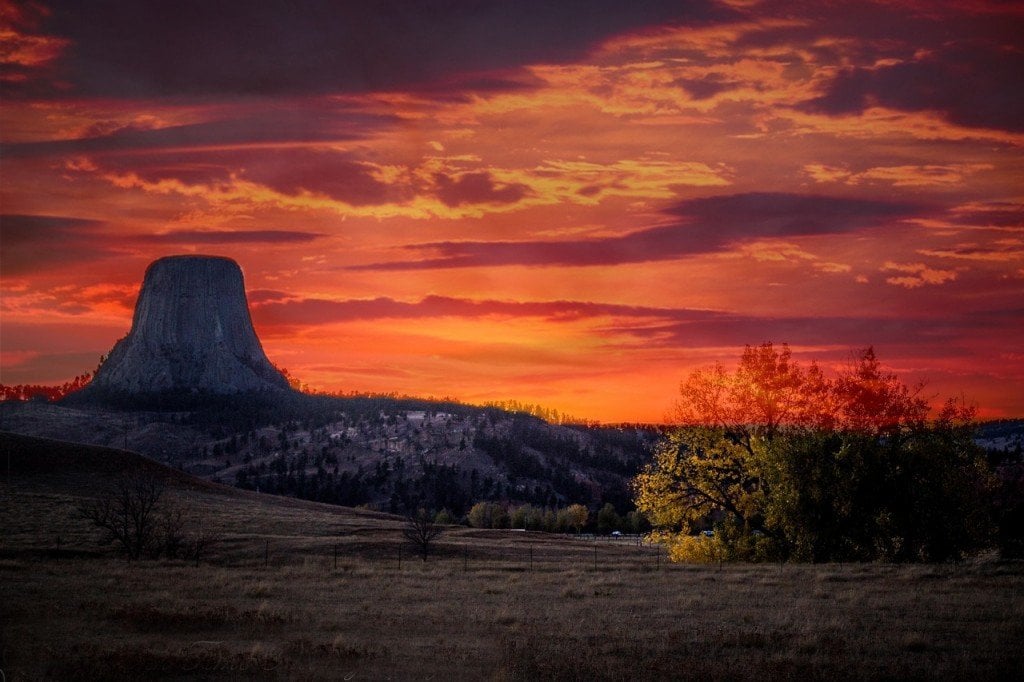 Essentially, our eyes aren’t quite sensitive to violet and indigo and instead make a generalization to hedge meticulous, power-consuming computation. Being so adeptly accustomed to the environment, the phenomenon has been nurtured and ingrained in us. This generalization to perceive the sky as a pure hue might not be a mere coincidence; the ability to separate natural colors is probably an evolutionary advantage. 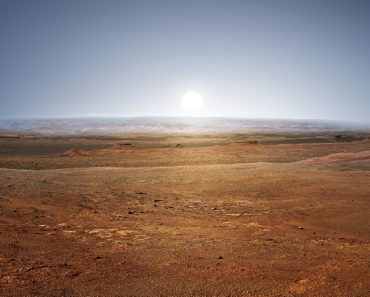