The Martian atmosphere is dominated by large-sized dust particles. These particles cause something called ‘Mie Scattering,’ which filters out the red light from the sun’s rays and only lets the blue reach our eyes.

A sunset is one marvel of the universe that touches the pondering soul of every human being. From paintings to poems to beautiful photographs, the shades of red, orange and pink that drape the sky at dusk awaken the introspective, artistic spark in all of us.

However, if you ever plan to visit Mars and enjoy your first night on the red planet by watching a beautiful sunset, you’re in for a surprise!

Unlike the earth, the sunset on Mars is not adorned by the rich tones of red. 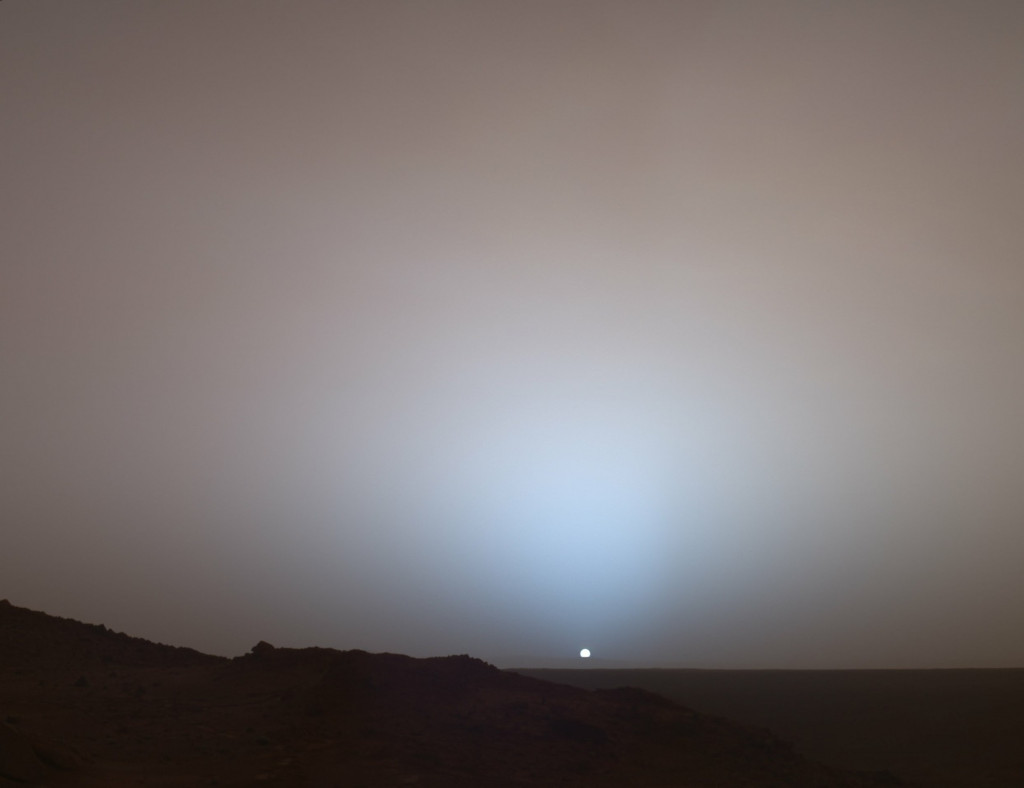 This stunning image of the Martian sunset was captured by NASA’s Spirit Rover in 2005. The picture shows a bluish-white sun surrounded by a halo of blue, which is very different from the appearance of a sunset on Earth.

The skies of Earth and Mars have a fascinating relationship. Our pale blue planet has a predominantly blue sky, which makes its way to orange-red at dawn and dusk.

Coincidentally, Mars, the Red Planet, has an orange-brown daylight sky that gently transforms into a bluish palette at sunset. The same sun is shining on both the planets, so why are their colors so different?

Mars is much farther away from the sun than Earth. Hence, when seen from Mars, the sun looks smaller and fainter.

According to the data collected by various Mars rovers, the sun has a bluish-white shade when viewed from that planet’s surface. Also, during sunset, the sun appears to be surrounded by an aura of blue light, which fades out and blends with the reddish-grey Martian sky.

But what causes this? The secret lies in the Martian atmosphere.

How Does The Atmosphere Affect Sunlight?

The sun emits a spectrum of electromagnetic radiation, ranging from high-frequency gamma rays to low-frequency radio waves. A part of this radiation called the visible spectrum can be detected by our eyes.

This visible spectrum, which we generally define as ‘white light,’ is further composed of seven different wavelengths that we all know by the famous acronym ROYGBIV. 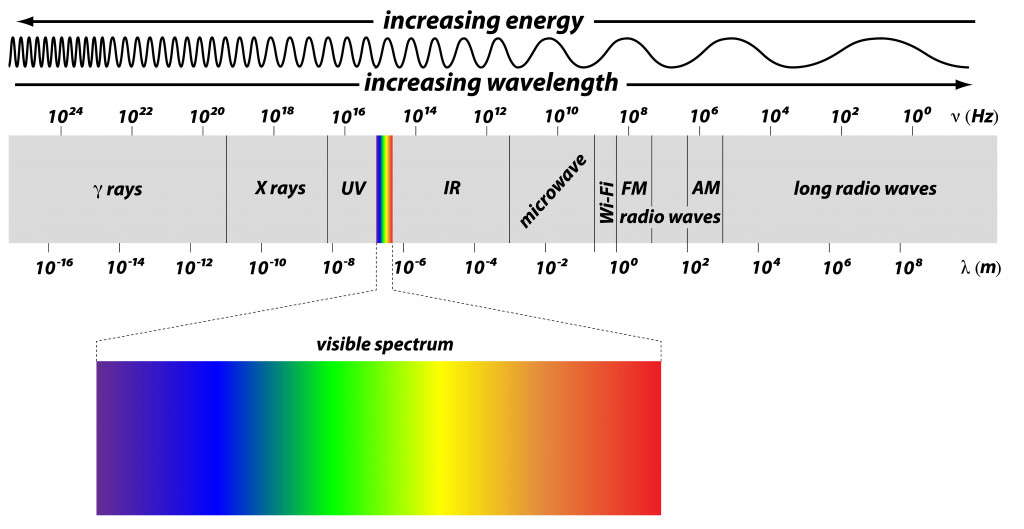 But what about the color of the sky and the sun on each planet being totally different?

This is because, other than the sunlight itself, the colors that we see depend on something else: the medium through which it passes.

Light interacts differently with different particles. When it encounters a particle, the light can get absorbed, reflected, or scattered. The extent to which this happens depends on the nature of the particle with which it interacts. Some particles tend to scatter more of the longer red wavelengths, whereas others go for the shorter blue waves. Thus, some wavelengths get removed during the propagation of light and the resultant color that we see varies accordingly.

For example, in outer space, where there are no particles to scatter or absorb light, the sun appears white. 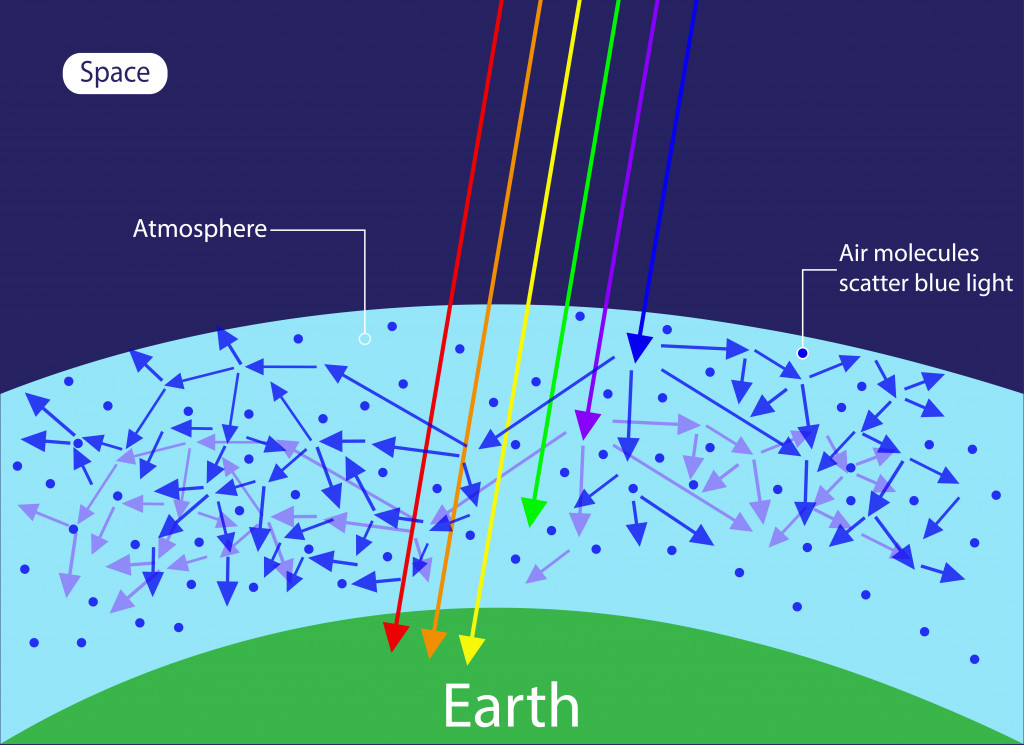 Why do sunsets on earth look red? This is due to something called Rayleigh scattering, which occurs when the size of particles is very small, as compared to the wavelength of the light.

Also Read: Why Is The Sun White At Noon And Red During Sunrise And Sunset?

The tiny nitrogen and oxygen molecules present in Earth’s atmosphere scatter the blue wavelengths, so by the time the light reaches our eyes, only the red remains.

Now, in order to understand why Martian sunsets are blue, we first need to inspect the composition of the Martian atmosphere. 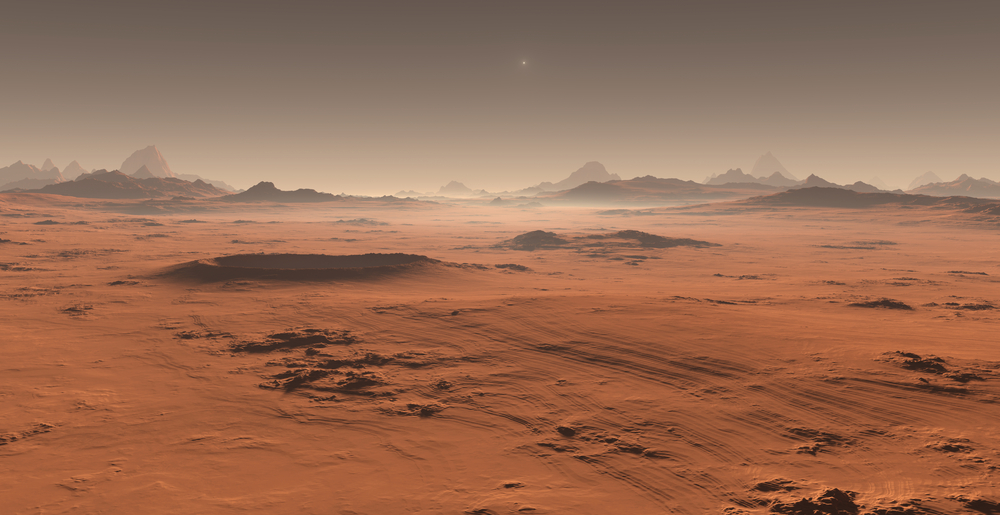 As discussed earlier, the scattering of light depends on the size of the particles. The smaller particles of Earth’s atmosphere favor Rayleigh scattering, but the situation on Mars is different. The dust particles suspended in its atmosphere have sizes ranging from 400-700 nm, which is almost equal to the wavelength of visible light; hence, these particles cannot undergo Rayleigh scattering. Instead, they follow a different optical phenomenon; Mie Scattering.

Mie scattering is the predominant type of scattering that occurs in larger particles. Unlike Rayleigh scattering, the phenomenon is not strongly wavelength-dependent. Instead, this scattering is more reliant on the direction of the rays. Here, scattering of light occurs more in the forward direction, as compared to sideways or backward scattering. 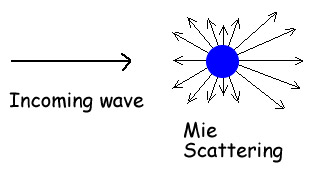 Mie scattering is predominant in the forward direction, i.e., in the direction of the incoming ray. (Photo Credit : Wikimedia Commons)

Generally, Mie scattering is said to scatter the lights of all wavelengths equally. However, depending on the size of particles present and the direction of the incident rays, the wavelength that they mainly scatter varies. For example, the dust particles in the Martian atmosphere scatter red light more than blue light. This, along with the presence of an abundant amount of red-colored iron oxide, is why the Martian sky looks red.

The Science Behind The Blue Sunset

When we analyze the Martian sunset, we immediately notice two features. One is the the bluish disk of the sun, and the other is the fading blue halo around the sun. Why does these occur?

Why Does The Sun’s Disk Appear Blue?

The sun, when viewed from Mars, looks blue because the Martian atmosphere filters out the redder wavelengths. The dust size on Mars is perfect for scattering red light, so these particles scatter red wavelengths more than the blue ones.

Since the sunlight travels the longest distance during the sunrise and sunset, by the time it covers its long path, the red light goes “extinct”, and all that remains is the short, blue wavelengths. This is called wavelength-selective extinction, and it is what makes the sun appear bluish.

What Causes The Blue Halo Around The Sun?

The enthralling blue glow around the sun cannot simply be explained through wavelength-selective extinction; here, the pattern of scattering is also significant. As mentioned earlier, Mie scattering is strongly dependent on the direction of the light rays, and it is more predominant in the forward direction.

Thus, when passing through the Martian atmosphere, most of the light will be scattered in the forward direction at small angles. As a result, instead of witnessing a blue tint spread across the horizon, we see more of a small, concentrated blue halo around the sun.

In a nutshell, the bluish color of the sun is due to wavelength-selective extinction, while the blue halo is the result of the angular scattering of sunlight due to Mie Scattering.

Can We Witness A Blue Sunset On Earth?

Now, if you’re bummed that your only hope of witnessing a blue sunset is by taking a trip to Mars, you’re in for yet another surprise. Occasionally, blue sunsets have been observed on our very own planet! In 1883, following the eruption of the volcano Krakatoa, locals reported that the sun and moon in the region appeared blue for over a month.

Around the same time, a bishop in Hawaii, called Reverend Sereno, reported witnessing a bluish halo around the sun surrounded by a brownish ring. This phenomenon, caused by the large-sized volcanic dust particles spewed out into the atmosphere following the eruption, has been named ‘The Bishop’s Ring’ after the reverend who first described it.

Besides volcanic eruptions, blue sunsets have also been occasionally reported in the deserts of Arabia, where dust storms are frequent. Sometimes, forest fires can also lead to red skies and blue sunsets.

Aside from every other factor mentioned above, the color of the Martian sunset depends greatly on something else—our eyes! The true color of the Martian sunset can only be described once it has been perceived by a human being. Until then, we have to be content with the images sent by our Mars rovers or wait around watching earthly blue sunsets that truly only occur once in a blue moon!