The moon looks gray because it is made of basic minerals that are mostly a dull grey color. The moon’s volcanic activity has also scarred the surface with dark spots, which makes it appear more colorful from Earth. The color of the moon can also change depending on the time of night or year, the moon’s position in the sky, and the amount of pollution in the air.

When walking outside on a cloudless night, no one can resist finding the moon in the sky. It gleams and shines down from among the stars, inspiring songs and lovers all over the globe. Although we know that we’re all looking at the same moon, if you were to ask people around the world what color the moon is, you might get a range of answers. 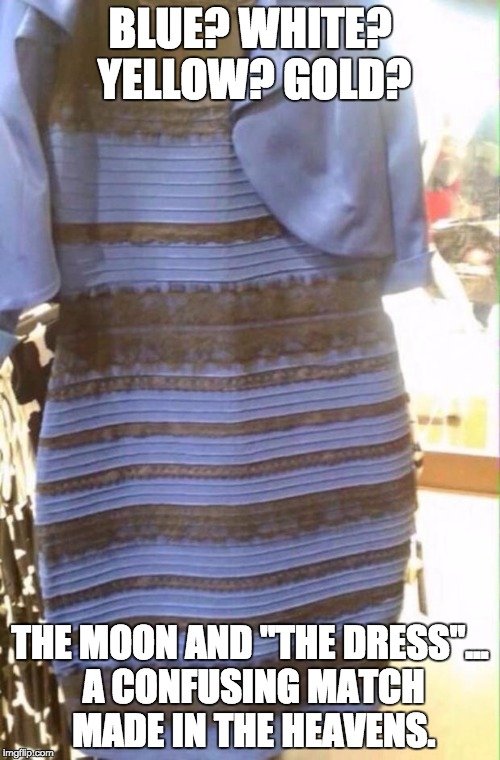 Short answer? The truth is, all of those color answers are correct (for the moon), depending on your perspective, what time of night it, where you are in the world, and how clean the air is. But perhaps we should explain this a bit further…

The Moon in Living Color

Although the moon does appear to be many different colors at different times of year or night, the most accurate pictures of the moon’s color come from… you guessed it… the moon. When we look at photographs taken during the Apollo moon missions (1969-1972), the landscape is pretty darn bleak. Unlike Earth, which is colored in countless, diverse ways along the entire range of the visible spectrum, there is no atmosphere, water or life on the moon. In other words, there isn’t much going on, and the makeup of our orbiting nightlight is quite simple.

On the moon, you will find magnesium, iron, calcium, aluminum, oxygen, silicon, feldspar and pyroxene. What all of these basic minerals have in common is that, as dust, they are basically a dull grey color. When you look at the photos, it is hard to believe that they weren’t taken in black and white, but when you see the colorful flash of a flag on an astronaut’s suit, or the copper gleam of the Apollo spacecraft, the reality sets in. The moon is grey… and great for off-roading.

On the surface of the moon, it all looks rather uniform, but down here on Earth, we see plenty of dark spots and apparent “terrain” on the moon, so what’s that all about? Well, the moon was once characterized by huge amounts of volcanic activity, and most of the rocks found on the moon are volcanic in nature. However, those massive eruptions also scarred the surface of the moon with what are called lunar maria. These blasted areas are less reflective than the rest of the moon, which is what gives the moon its “colorful” diversity.

Why Doesn’t It Look Grey All the Time?

Every color that we see down here on the planet is due to that material’s reflectivity of light. Outside, color is provided by sunlight, which not only strikes and reflects off everything down here, but is also affected by the atmosphere. The diverse range of particles in the air can refract and scatter various wavelengths of light, thus changing the color of the light we see.

As you might guess, the same thing happens to the light from the moon. Sunlight is reflected off the surface of our nearest neighbor, and then beamed down to Earth, but that is far from a direct transmission. 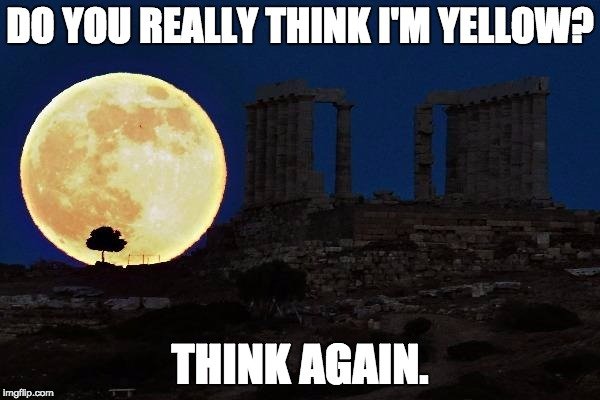 For example, when the moon is very low in the sky, near the horizon, its light is passing through far more of the atmosphere than if it were directly overhead. The more atmosphere it passes through, the more of the light on the blue and purple side of the spectrum gets scattered. Therefore, we see a more reddish or orange moon. By the time the moon is overhead, the light is less affected by the atmosphere, so it appears to be yellow, or closer to white/grey.

However, during the daytime, the moon is also in the sky for long periods of time in certain seasons. In these instances, the moon is a faint white color – definitely not yellow. The reason for this is because during the day, the moonlight must also compete with sunlight, and it is no match for the power of our star. There is far less reflection off the Sun in the middle of the day. The bright sunlight is also being scattered by particles in our atmosphere, thus dimming the appearance of the moon to a large degree.

What About Harvest Moons?

Many people will immediately point to harvest moons and supermoons as examples of the moon acting “bizarre”, and it’s true… the color of the moon can often be shocking. However, there is always an explanation, even for blood moons and blue moons. Depending on the composition of the atmosphere in a given place, different spectrums of light can be scattered, thus changing the color of the moon in your eyes. If you are in a city with high pollution year-round, it will be rare that the moon isn’t a different color at night.

The name “harvest moon”, the typically orange color of this phenomena, and its association with Halloween also make some people believe that the moon is responsible for this costume change. In fact, many people believe that harvest moons are more common in the fall because of agriculture practices and harvesting, which tend to kick up far more mineral-rich dust and particles into the atmosphere. So, while orange harvest moons can happen at any time of the year, they may be more common near the “harvest” time.

So, the answer to this intriguing question is actually quite simple. The moon looks gray in pictures because it actually is, but we will probably never look up into the sky and see a perfectly gray moon. As long as our atmosphere is in place, and until humans figure out a way to eliminate pollutants and dust from the air, our closest celestial neighbor will continue changing colors. Remember that color – like so many other things in life – is all about perspective!