Scientists determine the age of a star by looking at the star’s spin rate, brightness, and temperature.

When we look up into the dark sky on a clear night, it’s easy to be overwhelmed by the beauty of the stars far above. We connect the dots, find patterns, and even pick our favorite clusters. As amateur star-gazers, one thing we can’t do is determine the age of those stars. Are they a billion years old? 10 billion? Fortunately, scientists have developed a number of ways to derive the age of a star, giving us a clearer picture of the history of the universe, and even helping us in the search for intelligent life out in the cosmos!

The Secrets of Star Clusters

There are a few different obstacles to estimating the age of a star, but the general estimation is much easier when a star is in a cluster. These star clusters typically form at around the same time, but don’t necessarily all have the same properties. Therefore, if you can determine the size and luminosity of a range of stars in one cluster, knowing that they all were formed at approximately the same time, it can be easier to determine their overall age. 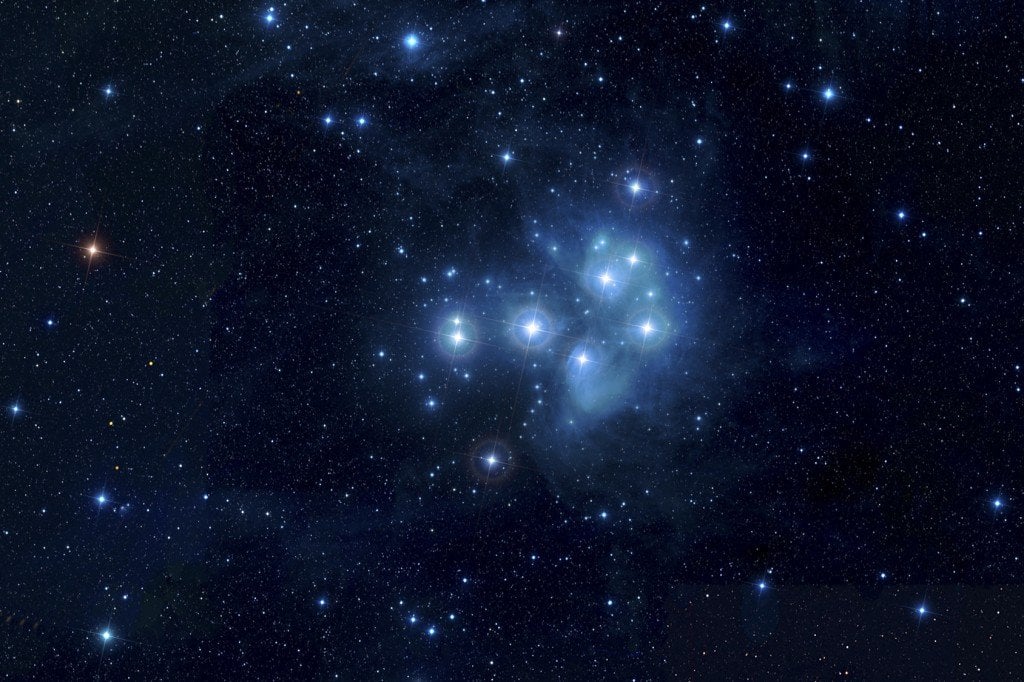 Most stars spend about 90% of their lives in the “main sequence” phase, where they are continuously pumping out energy and radiation due to the nuclear furnace inside of them. The most massive stars are “blue-hot” and extremely bright, whereas the least massive stars are “red-hot” and quite faint. Once a star has formed, the qualities of the star (brightness and temperature) don’t change much during the main sequence phase.

The length of this main sequence phase is directly correlated to the mass of the star, because once the internal fuel in the star’s core is used up, it enters a much less stable period, where it can expand, collapse, form a black hole, or even go supernova…

This connection between mass, brightness, and age means that star clusters can tell many tales. For example, you can look at the hottest, bluest, and most massive star in the star cluster that hasn’t left the “main sequence”, and calculate precisely how hot and bright it is. The mass of the star tells us how much fuel it had, while the brightness tells us how fast it is burning that fuel. Therefore, it is possible to roughly calculate the age of the star, and subsequently, the age of the other stars in the cluster. Today, researchers believe they have a 10-20% margin of error for star age estimation.

But What About Lone Stars?

While star clusters are easy to spot and somewhat easy to “age”, things are a bit more difficult for lone stars, as there is no reference context for how long they’ve been shining. Their “spin”, however, can prove very useful in this context, particularly since the Kepler Space Telescope has begun peering deep into the recesses of space to find answers. Before Kepler, Earth-based telescopes were unable to look directly at stars that were any older than half a billion years old or so, due to the interference of Earth’s atmosphere. The incredibly powerful lenses of the Kepler spacecraft are able to look directly at distant stars, where they can detect “starspots”, which are dark patches on the surface.

There is a direct connection between the mass, spin rate and age of a star, so if you know the mass and spin rate, then it’s possible to determine the age. The speed with which these starspots reappear on the surface of the star, noted by the Kepler telescope, can tell how fast the star is spinning. The dip in brightness that these star spots create are very difficult to spot, as they only account for about a 1-2% reduction in the total light output from the star, but Kepler can handle the task.

Stars do tend to slow down as they age, but researchers still aren’t sure exactly how much. In fact, the situational challenge of lone star age measurement is much the same as stars in clusters. Without a set reference – a “spin clock”, so to speak – it can be difficult, but measuring the spin rates of stars with a known age (using the techniques in the previous section) can help to establish a baseline. First, a researcher can measure the spin of a star in a star cluster, and then compare that measurement to the spin rate of a similarly-sized lone star. Voila – we can make a stellar birthday cake with the right number of candles. Why Does Any of This Matter?

In the grand scheme of things, for most people, the particular age of a star doesn’t make much difference; chances are, when you look up into the sky, you’ll only see a few thousand stars anyway, not the hundreds of trillions of stars out there in the universe. However, for those whose gaze stretches deep into the cosmos, determining the age of stars may be the key to finding other habitable worlds – or even extraterrestrial life.

By accurately determining the age of stars, and narrowing our search of the galaxy to those resembling our own solar system, we have a much better chance of finding future destinations for space travel or colonization, or even making contact with other interstellar travelers.