When some people stare up into the night sky, it can be an incredibly peaceful experience – one that inspires a sense of clarity (or insignificance). However, for those endlessly curious people on this planet, looking out into the stars seems to bring back an endless stream of questions and mysteries. What happens on the other side of an event horizon? What is dark matter and what the heck does it do? How big is the universe?

That final question (at least out of those three) is something that we can answer, although the explanation isn’t the easiest thing in the world to understand. Without getting into too many tangential or peripheral topics in astrophysics, let’s try, as simply as possible, to answer that question: how do scientists know how big the universe is? 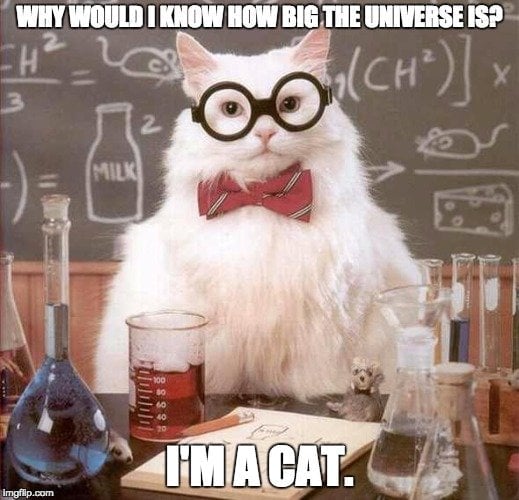 Short Answer: Based on various measurement tools at different ranges of distance (trigonometry, parallax, standard candles, supernovae brightness, galactic red shift and the cosmic microwave background), it is possible to create a cosmic distance ladder and accurately determine not only the distance of far-flung galaxies, but also the current size of the universe.

How Are Distances in Space Measured?

Before we can get into the most massive distances in the universe – billions of light-years – it is important to start at the bottom of the cosmic distance ladder.

Up Close and Personal

When we are attempting to measure things that are relatively close, such as things within our solar system and even in our small “neighborhood” of the Milky Way (within 100 light-years), it is possible to use basic trigonometry, just like you learned (and promptly forgot) in high school math class. Basically, if you measure a star’s location at one point in the sky during the year, and then measure its position six months later, you will have a relative position of the nearby object in relation to the far more distant stars in the sky.

If you know the size of the Earth’s orbit, then based on the angle of light in those two measurements, it will be possible to calculate the distance (Thanks, Pythagorean Theorem!). However, the further away a star is, the less of a shift it will have, making the measurement of this angle impossible, which means the next rung in the ladder is required…

Once you get beyond the range of trigonometry as a useful tool, astronomers rely on stars called Cepheids, which are quite common and very bright. First discovered in 1794, these particular stars have the tendency to pulsate, growing dimmer and brighter in a regular pattern. Interestingly enough, the longer a Cepheid takes to pulse, the brighter the star actually is, while the shorter the pulsation period, the dimmer the Cepheid is.

By measuring nearby Cepheids with the parallax method (explained above), and then comparing the length of their pulsation period to those Cepheids that are further away, the true brightness of those stars can be determined, and thus their distance can be calculated. Cepheids throughout our galaxy and beyond (up to 80 million light-years away) are known as standard candles and can be used as standard distance signposts, forming another critical rung of the cosmic distance ladder. 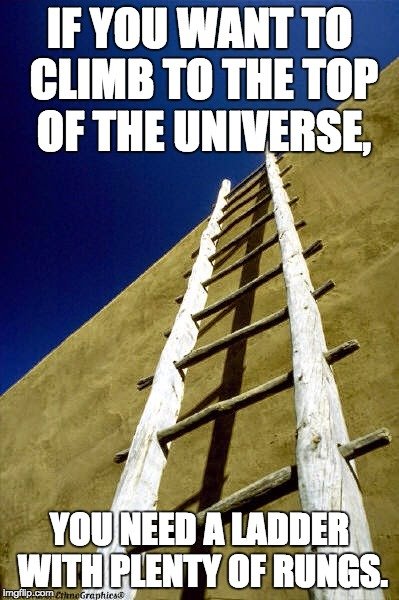 Although 80,000,000 light-years seems like an incredibly large distance, the universe is 1,000 times larger than that, meaning that yet another rung on the ladder is required. Supernovae come in extremely handy here, primarily those that come from particular binary star systems. In these two-star systems, one star dies and becomes a white dwarf, while the other star survives. The white dwarf then begins to feed off the living star, increasing in size until it is exactly 1.4x the mass of our sun.

At that point, there is a massive explosion, so big that it can be seen across half the observable universe, releasing more energy than entire galaxies. This is known as a Type 1A supernova. Since we know the amount of mass that is exploding, it allows astronomers to calculate the absolute brightness of that explosion, and thus the approximate cosmic distance to those far-away galaxies.

At even greater distances – into the tens of billions of light-years – something called the Hubble Constant comes into play. Named after Edwin Hubble, this is the unit of measurement for the expansion of the universe. Now, this is where this entire conversation gets a bit more confusing. This might be difficult to comprehend, but not only is the universe expanding in all directions at the same time, at an ever-increasing rate, but the space between different objects in the universe is also expanding. This inter-object expansion (and acceleration) is related to dark energy, which goes beyond the scope of this article, but suffice to say, everything is moving away from everything else, and it is moving faster and faster all the time.

When Hubble looked at the light from distant galaxies through a prism, he observed a “redshift” away from known variable for the color. For those who don’t know, when looking at light from an object moving away from you, the light appears more red, because it is stretching the electromagnetic spectrum energy out. On the other hand, when looking at light from an object moving towards you, it will compress the magnetic spectrum, and there will be a “blueshift”. For the vast majority of galaxies observed by Hubble, he found that they had this redshift, meaning that they were moving away from us. By plotting different redshifts and known distances on a graph, it became possible to determine the distance of extremely distant galaxies with a relatively high amount of accuracy.

This is the final measurement tool, and basically functions as a baseline for distances within the universe. The cosmic microwave background (CMB) is the leftover radiation from the very earliest moments following the Big Bang (earliest is a relative term, and is roughly from 400,000 years after the Big Bang). This radiation is the oldest and furthest radiation ever detected, in the “empty” space between stars. This baseline puts the age of the universe at approximately 13.7 billion years. 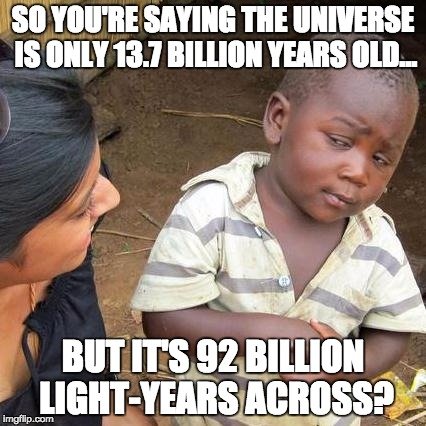 However, the “known universe” does not have a radius of 13.7 billion light-years. Think back to the Hubble Constant, and its measurement of the expansion of the universe. The light from the CMB reaching our eyes right now has been traveling for 13.7 billion years, but the universe has also been expanding in the meantime, pushing the “edge” of the known universe much further out, even though we can’t technically see that far. By using the Hubble Constant, we can calculate where the origin of those photons are now, and the answer is staggering – 46 billion light-years away! That means the “known universe” is 92 billion light-years in diameter!

Clearly, calculating distances of this magnitude can bend the brain beyond the realm of human comprehension. Fortunately, with the cosmic distance ladder in place, and plenty of astronomers well versed in these types of measurements, we’re able to keep tabs on how the universe is moving – as well as our place within it!