An increment borer is a tool that can be drilled into the center of a tree, about 20% past the center of the trunk, and then retracted with a cylinder of the trunk in tow. This thin cylinder can then be examined and its rings can be counted for a relatively precise measurement of a tree’s age.

When we stand in an ancient forest and look upwards, admiring the trees soaring above our heads, a common question often pops up – how long have these trees been here? The thing about trees is that they’re all different; some live fewer than a century, while others can live for more thousands of years. These age-old guardians have fascinated people around the world since time immemorial, but for people in modern times, there is a great deal of curiosity about accurately calculating the age of trees. So how do we do it? 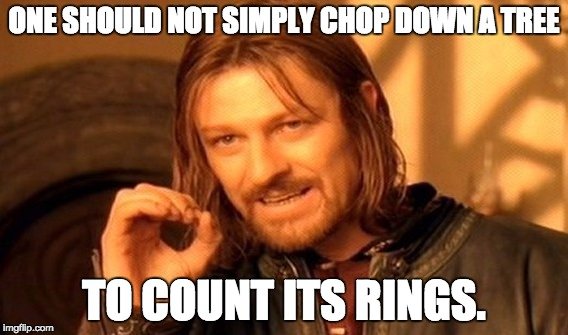 Short Answer: The only guaranteed method is knowing when the tree was planted, but tree growth rings are also highly accurate – to a point – in determining the age of a tree. These growth rings can be counted when the tree is either alive or dead, in addition to various other non-invasive methods to roughly predict a tree’s age.

The Science of Growth Rings

The most popular method of determining the age of a tree is through dendrochronology – the science of dating tree rings – but this is a rather new field of study. In fact, it has only been 500 years since humans came to understand that the rings around the trunk of a tree were not only indicative of how many years a tree had been alive, but also the weather conditions in which it was growing.

While all trees have the potential to grow rings, those trees in perpetually identical climates, such as tropical trees, may grow at a uniform speed, and not form visible rings in the trunk. However, for the vast majority of tree species on Earth, the variable growth rates during the spring and fall (fast and slow, respectively), will cause a clear ring to form. Each set of rings, typically one dark and one light, together represent a single year. These new rings form on the outside of the tree, nearest the bark, meaning that the interior rings are the oldest, and often the most difficult to accurately measure.

The difficulty in measuring growth rings is that every branch and offshoot on a tree also has rings that expand each year, so it is critical that you measure near the base of the tree, before any divergences occurred. The other challenge in measuring the rings around a tree is that the easiest way to do so is to cut the tree down. The large, flat plane of a tree trunk makes it very easy to intensely scrutinize each ring for an accurate measurement of the specimen’s age, but unfortunately, this requires killing the tree.

Methods of Calculating a Tree’s Age

The good news for tree-huggers around the world is that there are some ways to measure a tree’s age without cutting it down. An increment borer is a tool that can be drilled into the center of a tree, about 20% past the center of the trunk, and then retracted with a cylinder of the trunk in tow. This thin cylinder can then be examined and its rings can be counted for a relatively precise measurement of a tree’s age.

Also, for trees that have died or fallen during storms, counting tree rings around the trunk is harmless and can provide invaluable information about the environmental conditions in that area for hundreds of years. For example, a year with a drought would result in a very thin light ring, whereas a season of plentiful rains would allow the early spring wood to grow far more. These variations in temperature and rainfall can help to estimate the progression of climate change, and also act as a clue for any long-term changes in a given ecosystem. Some modern researchers are excited about tracking long-term trends in climate change that might indicate what the future holds for our generation. 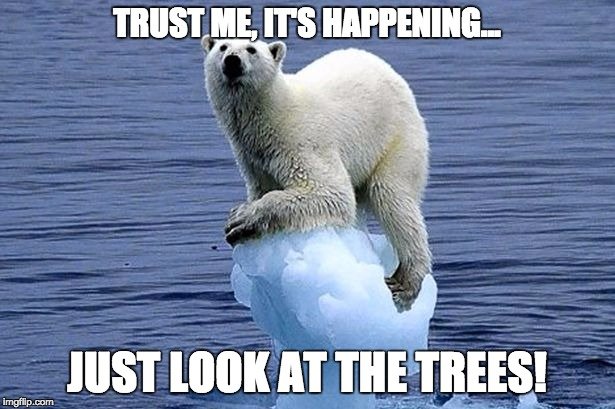 Some of the less refined methods of measuring a tree are applicable for certain species of trees, such as counting the number of tree whorls. These are the “knots” that you often see in the side of a tree, and some species – such as conifers – form an annual branch whorl, so counting their number on the trunk can indicate its approximate age, specifically for young or medium-aged trees. Only count the whorls that appear above chest height when using this type of approximation.

Finally, you can even apply math to determine an approximate age of a tree.

Since different species tend to grow at different rates, and respond differently to environmental factors, researchers have established annual growth rates for most common species. If you know this growth factor, you can then measure the circumference of the tree at about chest height, and from there you can calculate the diameter. If you multiply the diameter of the tree by the average growth factor, you should get an approximate age, in years, of the tree. Due to the inherent variability of a tree’s growth, this can only be considered an approximation, and could be off by 3-5 years, at least.

The uses of tree rings don’t stop in simply noting the age of a tree, but it can also note the age of wood itself. For example, if you know that a piece of wood in an old ship came from a certain area, and displays a certain ring pattern on its boards, it could be possible to determine when the ship was built. Using tree rings as a complementary tool also improves the efficacy of carbon-dating strategies, which can tell us even more about the ancient world!