Dung beetles seem to use light coming from the sun, the moon, and the Milky Way as a compass to find their way back to their holes in the ground. The differences in light intensity, as well as the polarization of the light, provide directional cues. The dung beetles can also use the wind for direction when a light source isn’t available to them.

You’re returning from a trip to the grocery store. Lost in thought, you take several wrong turns, and now you are truly lost. To make matters worse, you don’t have a phone with you and you’re driving a car without GPS!

What do you do now?

If you have time to spare, you could drive around until you find a landmark that you recognize. You could also ask someone for directions or borrow someone else’s phone to use their GPS.

However, if you were a dung beetle, you wouldn’t need any of that. You would simply get out of the car, look up at the sky and do a little dance. At that point, the light would guide you home!

Dung beetles use the sun during the day, and the moon and the Milky Way galaxy at night to find their way back to their hole.

How does this beetle with a brain the size of a poppy seed manage to read the sky like its own personal compass?

What Is The Dung Beetle?

The “dung” part of “dung beetle” comes from the sight of these tiny insects rolling a ball of dung, usually from a cow or elephant, many times their own size on uneven terrain (very reminiscent of poor Sisyphus). However, only 600 of the more that 8,000 dung beetle species actually roll dung.

Hundreds of dung beetles swarm around dung piles, eager to carve out their own dung balls. They take their fresh spheres of poop back to their hole in the ground.

There, it will proceed bury itself with the dung to have dinner. Yes, the dung beetle will eat the dung, more specifically, the liquid juice of the dung. The liquid is rich in microorganisms and undigested nutrients. If the beetle managed to attract a mate, the ball of dung would also serve as a nest and food source for its offspring.

Reading that might give you the illusion that getting a dung ball back home is, for the beetle, as simple as you finding your way home after a trip to the local supermarket. However, that is not the case.

Why Do Dung Beetles Need To Navigate And Where Are They Going?

Very often, the beetle is in danger of getting lost. There is a time limit (a few minutes) within which the beetle must make it back, and on the way, there is the risk of other dung beetle highway robbers who might try to steal the excrement.

The risk of getting lost is even greater when you consider that the beetle doesn’t even look at the path ahead as it rolls its dung. The beetle can’t look ahead because it is pushing each dung ball with its hind legs, head downwards. Imagine that you were rolling a ball with your legs while maintaining a head stand. That is the gymnastic skill of a dung beetle! 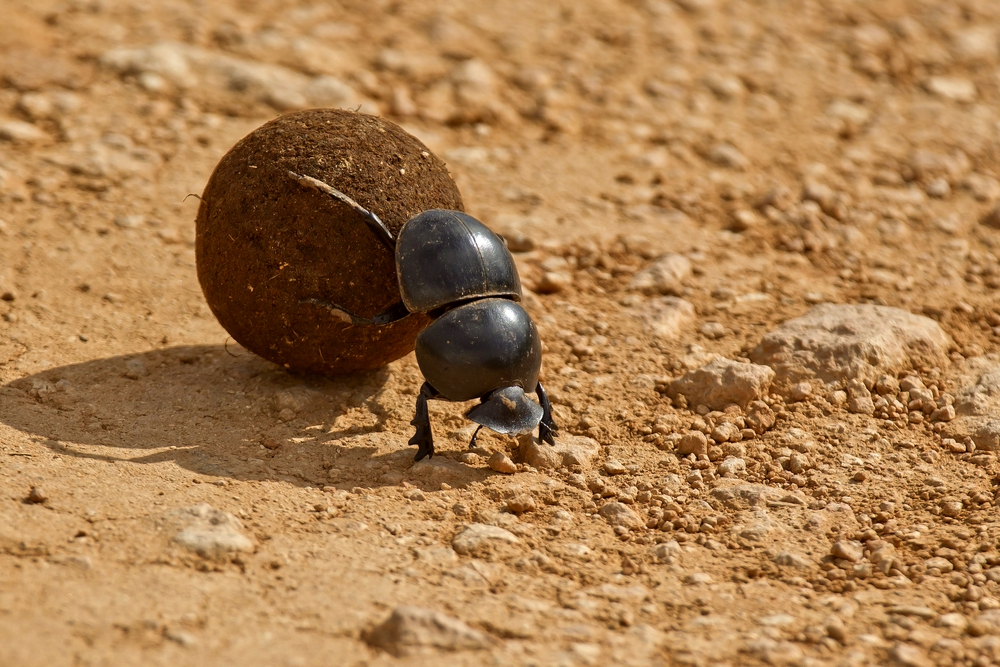 The dung beetle in its upside-down struggle to push the dung ball (Photo Credit : michael sheehan/Shutterstock)

Ever curious, and frankly nosey, scientists began to investigate how the beetles make it back to their home so consistently. They asked questions like, how do they find an efficient way back, and what happens if they get lost?

Scientists found that the best way for the dung beetle to get back is to travel in a straight line. And in case they get lost, they simply climb up on their dung ball and look up to the skies. Dung beetles that are active during the day use the sun, while those active at night use the moon and the Milky Way as their guide.

How Do Dung Beetles Use The Sun To Navigate?

For beetles active during the day, the sun is their compass.

Observe the beetles long enough and you’ll notice that they generally travel from east to west. This observation was first recorded by the Egyptian scholar Horapollo in the 5th century C.E.

In 2003, this observation received a more modern scientific treatment, when researchers from the University of the Witwatersrand, South Africa and University of Lund, Sweden collaborated to investigate how dung beetles navigated the world. They put obstacles in the path of the beetles, blocked the sun from view, used an artificial light source, and even reflected the sun’s light in another direction to see how the beetles would behave. 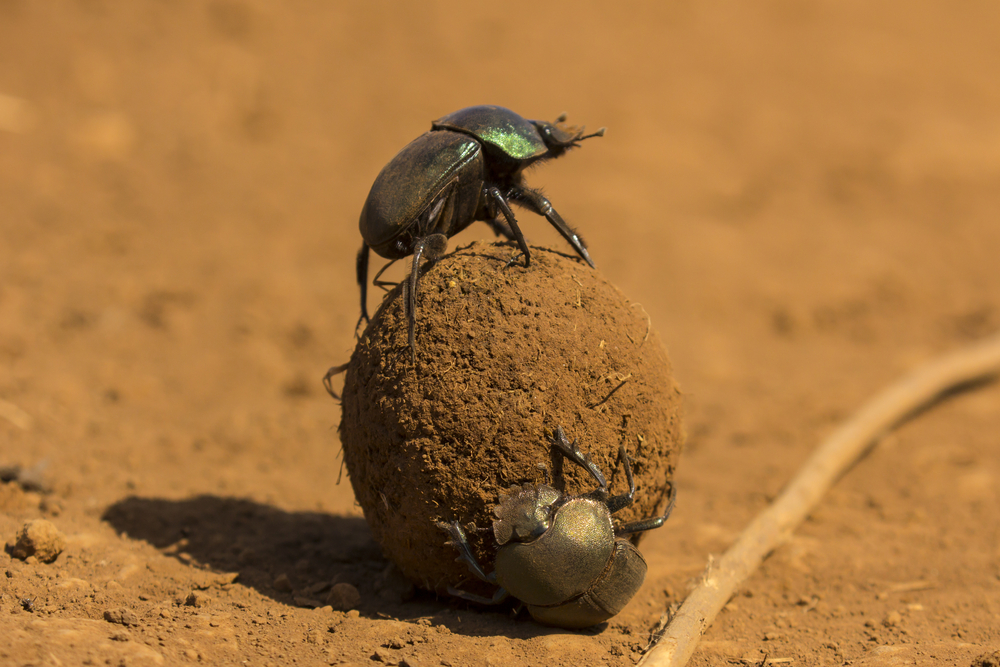 A male beetle is standing on top of his dung ball looking to the sun for directions. On the bottom of the dung ball is a female dung beetle who will mate with the male dung beetle. (Photo Credit : Rich Carey/Shutterstock)

The beetles deftly handled all the obstacles, returning back to their straight-line path following the sun. When the sun was blocked, however, the beetles would lose their way. When the sun’s light was reflected in another direction (with the sun blocked from view), the beetles pursued the reflected sunlight.

This gave researchers the hint that the sun’s light and its directionality was a primary cue for these scavengers.

How Do Dung Beetles Use The Moon and The Milky Way to Navigate?

In the event that the moon isn’t present, the beetles use the light from the Milky Way Galaxy. The Milky Way isn’t uniformly bright, as its southern half is brighter than its northern part. This gradient of light allows the beetles to use it as a guiding light.

It appears that these clever beetles are the only animals that use the Milky Way for such short-distance navigation, although many birds that navigate use constellations in the sky to find their way. 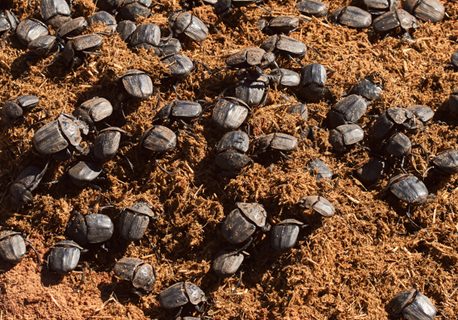 The dung beetle solves its own problems. (Photo Credit : ArCaLu/Shutterstock)

Scientists still aren’t sure how the brains of these beetles are able to do this. They are currently working on comparing these beetle brains to insects that use other navigational techniques. The dung beetle doesn’t use landmarks, which many other insect species use. Comparing the brains of dung beetles to those insects might allow researchers to get a deeper and more revelatory glimpse into the brain of the dung beetle.