In school, during break time, we geeks used to rush to the library. One of the commonly sought-out books back then used to be the Guinness Book of World Records. I can still recollect that the ‘Dead Sea’ was listed as having the ‘Earth’s lowest elevation on land’. I remember being intrigued by this piece of information, and now, in my adulthood, I’m here writing a full-fledged article about the fascinating science behind the Dead Sea!

What and Where is the Dead Sea?

The Dead Sea is a body of water bordered by Jordan on the east and Israel and Palestine to the west. It is a hypersaline (extremely salty) lake and truly one of nature’s marvels. The shores of the lake are 423 m (1388 ft) below sea level, making it the lowest point on land. 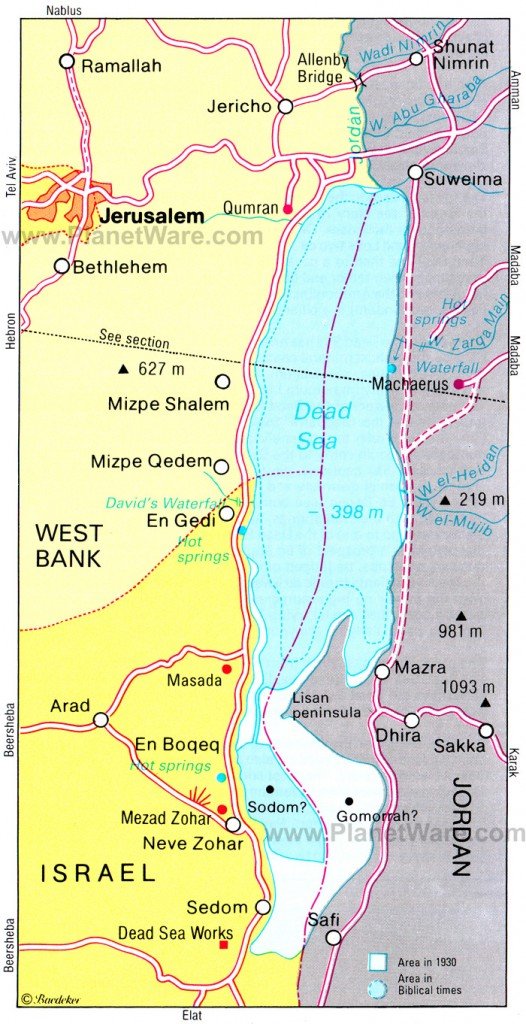 Why is the Dead Sea called the “dead” sea?

Actually, the earliest reference to the present Dead Sea is recorded in the Book of Genesis, the Hebrew scripture where it is alternatively referred to as Salt Sea due to its high salt content. With salinity levels close to 35% (342g/kg), it’s one of the saltiest lakes on the planet! Also, it’s a landlocked lake with no outflow, meaning that salt is trapped and cannot escape.

During the Roman era, visitors started referring to it as the “Dead Sea”. They named it so because it was bereft of all the ‘normal’ lifeforms, such as fish, plants and animals. Since then, this lake has been popularly referred to as the Dead Sea. However, it is referred to by other names, such as the Salt Sea, Plains Sea, Primordial Sea, Sea of Sodom, Sea of Asphalt and even the Devil’s Sea in various cultures. 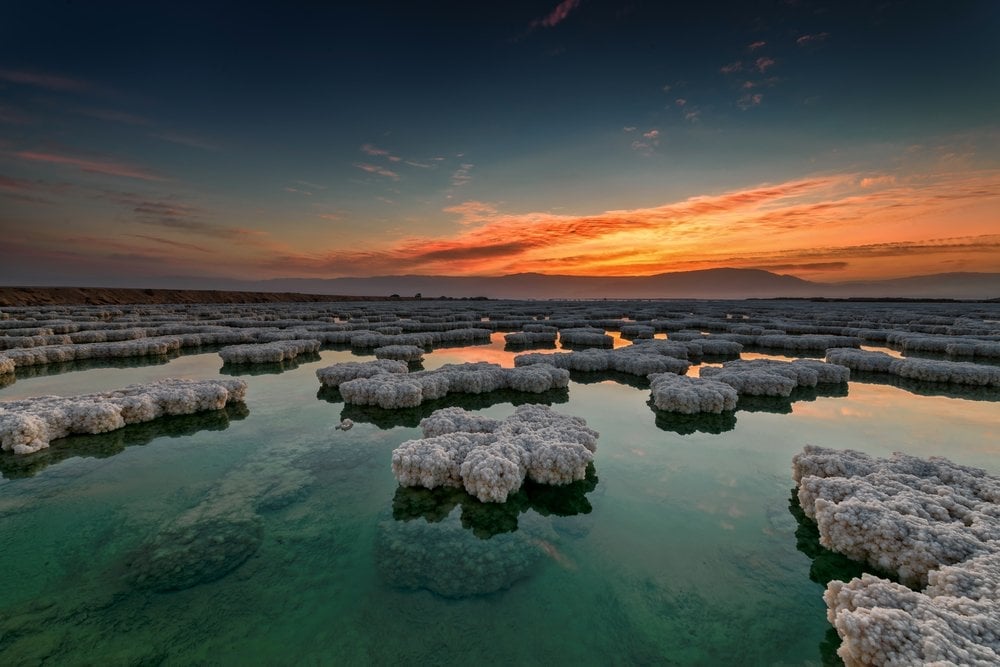 Fascinating History of the Dead Sea

The Dead Sea is even referenced in the bible, where it is called the ‘Sea of Plain’. The biblical description is as follows:

“That the waters which came down from above stood and rose up upon an heap very far from the city Adam, that is beside Zaretan: and those that came down toward the Sea of the Plain, even the Salt Sea, failed, and were cut off: and the people passed over right against Jericho”

As we said earlier, the Dead Sea got its name in the Roman era. In the later Roman Era, salt was considered as a high-value commodity—as precious as silver and gold. In fact, salt was even used as currency; Roman armies were often remunerated in salt!

Bonus fact: The word salary is derived from the Latin word “sal”, which means to pay remuneration in the form of salt!

Beginning with Emperor Trajan, Romans built many fortresses to guard the entry and exit near the Dead Sea, due to its high salt content, which was such a precious commodity during those times. The Dead Sea used to serve as a royal spa for a “healthy” bath for the Roman elite, like King Herod the Great. In the history books, there are also stories of Cleopatra taking baths in the Dead Sea on account of its “therapeutic properties”.

Why is the Dead Sea so salty?

As mentioned earlier, the Dead Sea is located on the lowest elevation point in the world and is completely landlocked. Still, many are flummoxed by the high salinity levels of the Dead Sea.

So, what makes it so salty?

Well, given that the Dead Sea is landlocked and at the lowest terrestrial elevation level on the planet, it becomes a terminus where rain and surface water flow. However, that water cannot flow elsewhere. It can only evaporate. During the scorching summers, there is an irrevocable loss of water (H2O) from the lake. That’s why, over thousands of years, there has been a trend of rising salinity, as the water (H2O) evaporates, while the salt and other minerals remain in the Dead Sea.

Is the Dead Sea really devoid of life forms?

With such a high salinity level, it isn’t surprising that the sea and its shores don’t exhibit typical flora and fauna that are generally found near a sea. With the advancement in science and technology and the Dead Sea being a hot topic amongst researchers, we have now figured out that the Dead Sea is not really a “dead” sea devoid of all life at all. Several pieces of research have confirmed that there are colonies of tiny microbes here. One of the most cited organisms is Dunaliella algae, which many claim provide various health benefits. Dunaliella algae have a high concentration of beta carotene, antioxidants and some vitamins as well. Besides microbes, other animals like swamp cats, storks, marsh frogs, and snails are occasionally seen near the Dead Sea’s shores. 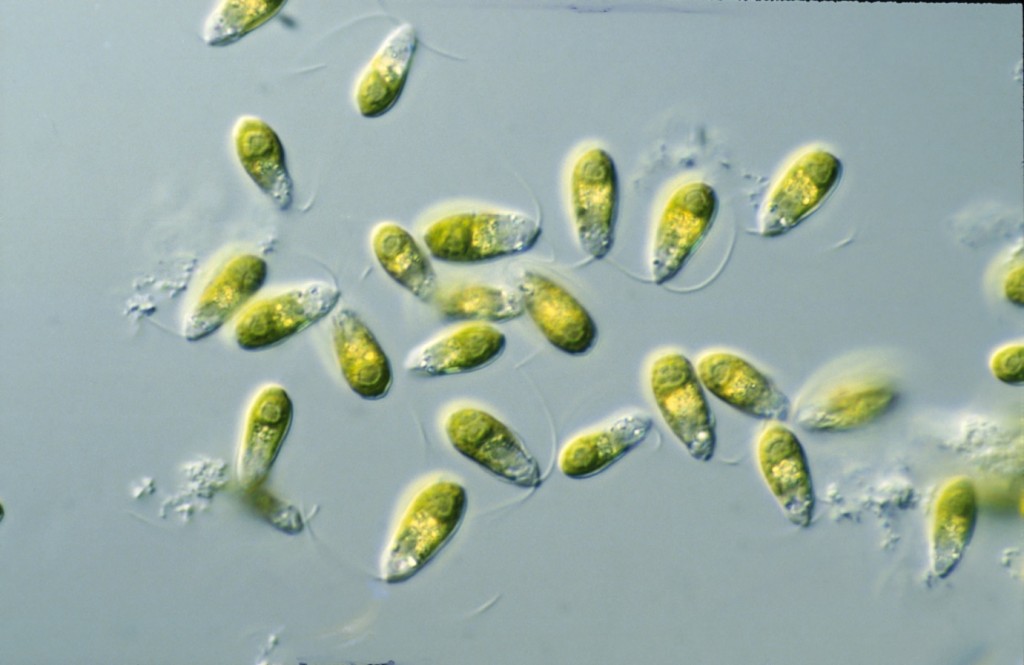 Dunaliella algae : microbe that survives in the harsh saline water of the Dead Sea

Why do you float in the Dead Sea?

One of the reasons why the Dead Sea is a tourist hotspot is its eccentric characteristic: you can float in the sea even if you don’t know how to swim! In fact, you can’t really swim in the Dead Sea. You just float.

Those who have not been to the Dead Sea may be wondering what it feels like to be in it. Well, the moment you go into the water, you would feel like the water is pushing you up from the bottom to stay afloat at the surface. As you move farther away from the shore, you will feel as though your body is becoming lighter and you’ll feel more buoyant. 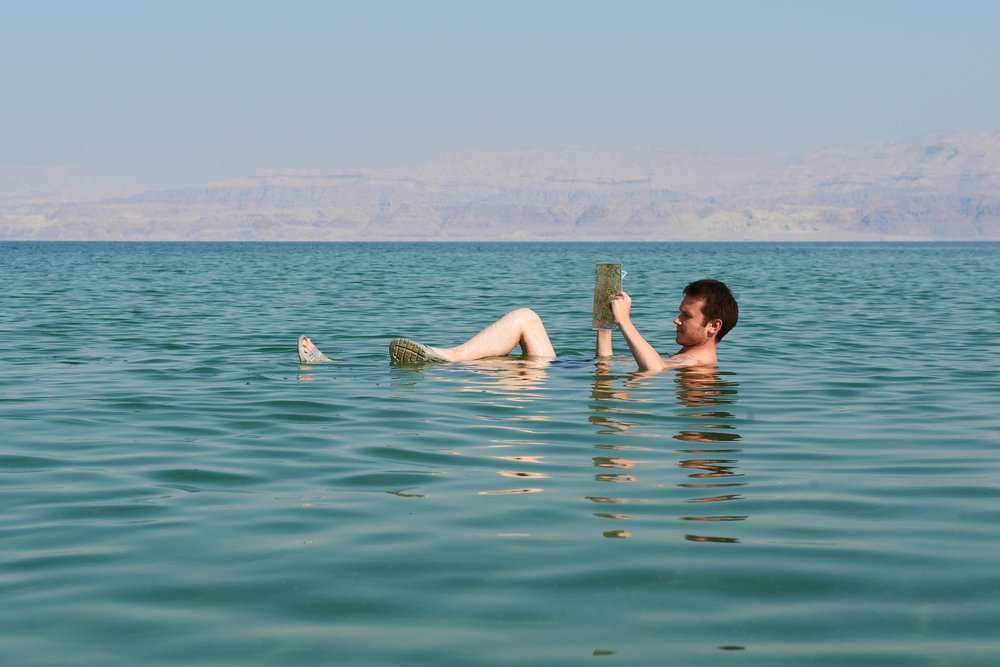 Now the question arises, why do you automatically float in the Dead Sea instead of drowning? Well, the answer is again associated with the “high salinity” of the water. With more 340 gms/kg salt content, along with the high amount of other minerals, the water in the dead sea is denser than other water bodies. It is also denser than a typical human body. Hence, when we get into the Dead Sea, our body stays afloat on account of having ‘relatively’ lower density than the surrounding water. 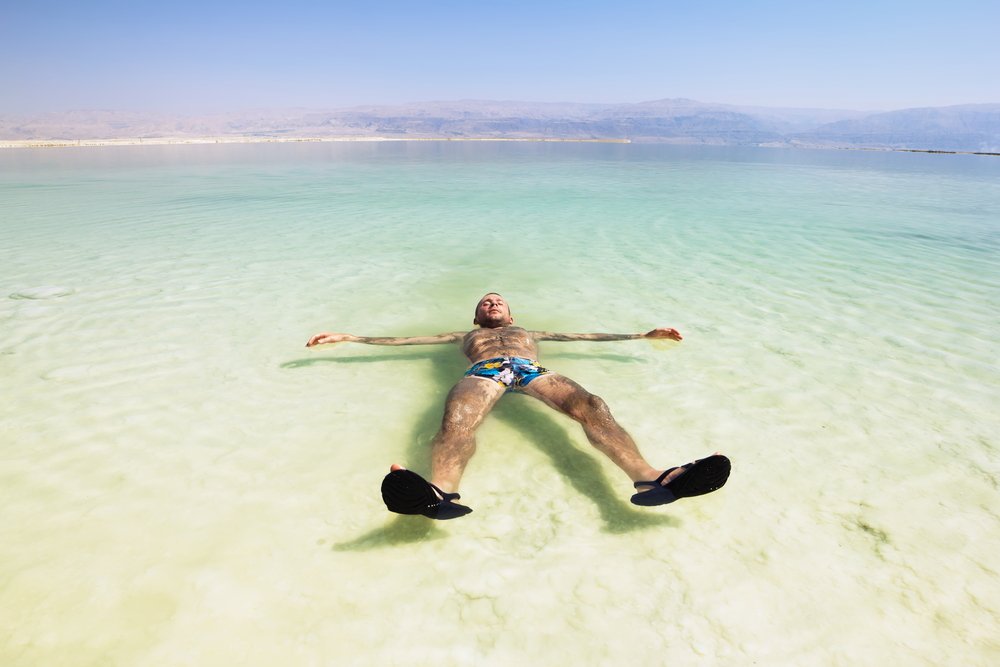 Such high salinity also means that you can’t really ‘dive’ or ‘swim’ in the water. You will simply stay afloat. In fact, you should probably avoid soaking your head in the water, particularly your eyes! Also, those who have open wounds or cuts should avoid going into the Dead Sea, as the unusually high salt content could aggravate those wounds.