Researchers often turn towards dung analysis to learn more about the species. Some key parameters one can assess are (i) Number of elephants, (ii) gender, (iii) stress, (iv) food preferences, and (iv) gene flow and population structure.

Elephants are some of the most majestic creatures on our planet. Their long trunks and floppy ears, thick legs and gigantic size make them a truly unique species. Besides, they’re also one of the smartest and most intelligent species in the world. 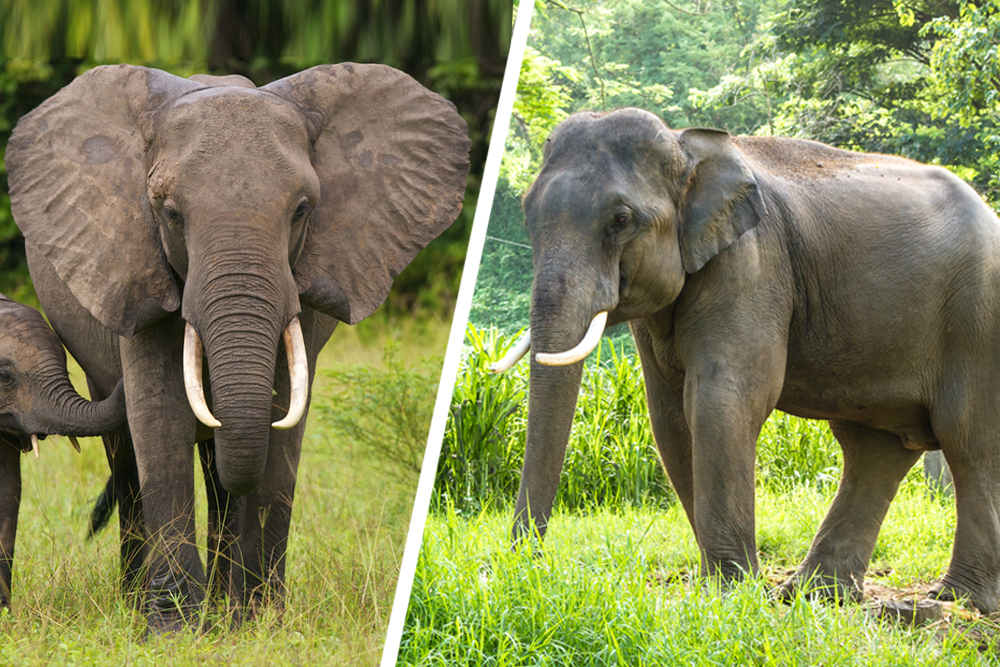 Role of elephants in forest ecosystems

Elephants play a crucial role in forested ecosystems. Their feeding patterns provide nourishment for other animals, help in the development of new plants/shrubs/trees, maintain food chains in forests, and create paths in dense and thick forests that aid other animals. Moreover, even their dung provides food and shelter for many insects, and promotes seed dispersal. However, despite playing a critical role in maintaining ecosystems, elephants are one of the most threatened species in the world. Some of the key threats to their survival are habitat loss and fragmentation, deforestation, poaching, and human-elephant conflict.

As a result, elephant conservationists worldwide have been studying the species and their habitats to protect them more effectively. While many studies rely on physically following elephants in the field, a large proportion of researchers are also studying the species using their dung (or poop).

Yes, you heard that right, studying them through their dung. 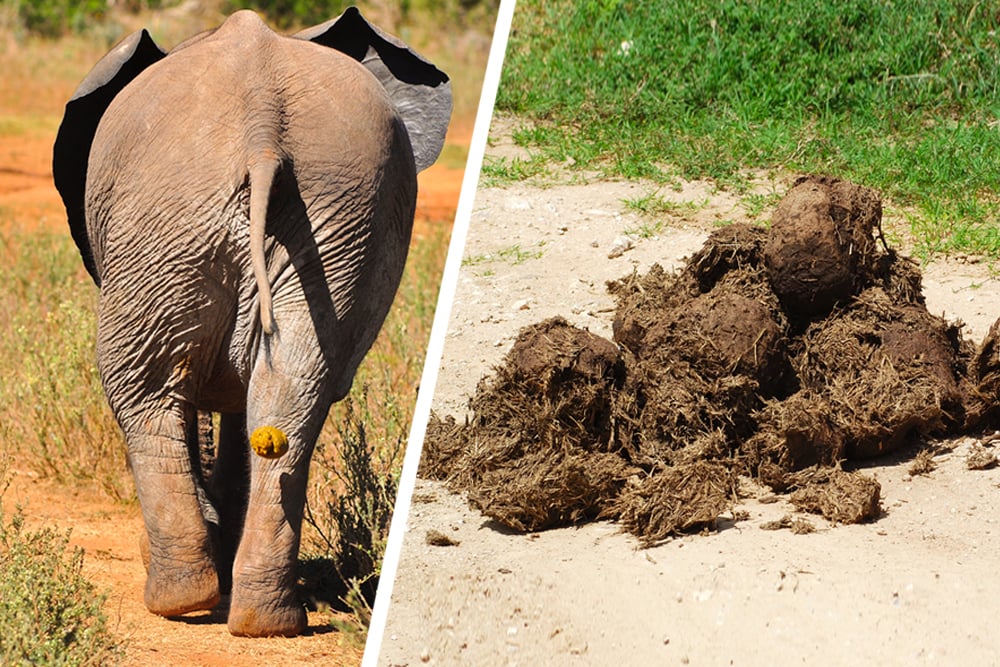 If you’re wondering what elephant poop can tell someone about an elephant… keep reading!

Counting elephants directly in forests is often challenging, as thick plants/trees and shrubs easily hide them. Elephants also traverse large areas in search of food and water, making it even more challenging to get an accurate count. However, researchers have developed a way to estimate the number of elephants in a given region by counting dung piles and observing the dung decay rate.

You can never be sure how many elephants are present in dense forests. (Photo Credit: Taned Suparpornhemin/Shutterstock)

This method is widely used across the world and is reasonably reliable and accurate. For instance, using this method, researchers in Gabon, Central Africa estimated around 61,800 (±20,200) elephants in the region. Similarly, researchers in Nepal were also able to determine elephant numbers (57 elephants) in the country using this technique.

Identifying and monitoring gender dynamics in elephants is also vital for their conservation. This is due to the adverse effects that poaching has on elephant populations; if poaching is high, it results in skewed sex ratios (more females and fewer males).

It is sometimes difficult to identify the gender of elephants in the wild through direct observations, particularly in dense forests. Therefore, researchers often determine the sex of elephants and their sex ratios by analyzing dung. For instance, one study determined gender and adult sex ratios among elephants in Southern India.

Yet another parameter one can study using elephant dung is stress. Just like humans, elephants undergo stress, more so when they come in close contact with humans. By analyzing dung samples, conservationists can determine glucocorticoid levels (stress hormones), which helps experts understand how stressed an elephant is and whether it has been facing chronic stress in its environment. 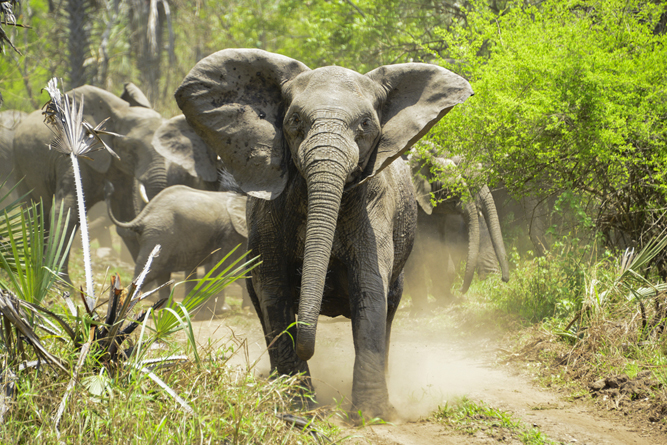 Interactions with humans often cause stress among elephants, which can be determined from their dung. (Photo Credit : Walter Mario Stein/Shutterstock)

For instance, a group of researchers examined fecal glucocorticoid metabolite levels in elephants in Kenya and found that male elephants that raided crops had higher levels of stress.

Another study in India investigated reproductive and stress hormones among captive elephants and found higher levels of stress among elephants used in public festivals and processions.

Examining elephant poop can tell us a lot about what plants (seeds, fruits) elephants feed on. This is particularly important because it can help in the conservation of specific plants and trees that elephants depend on for their nutrition and survival. For instance, researchers in Ghana identified eleven dominant plant species that elephants regularly consumed and were vital for their nourishment. 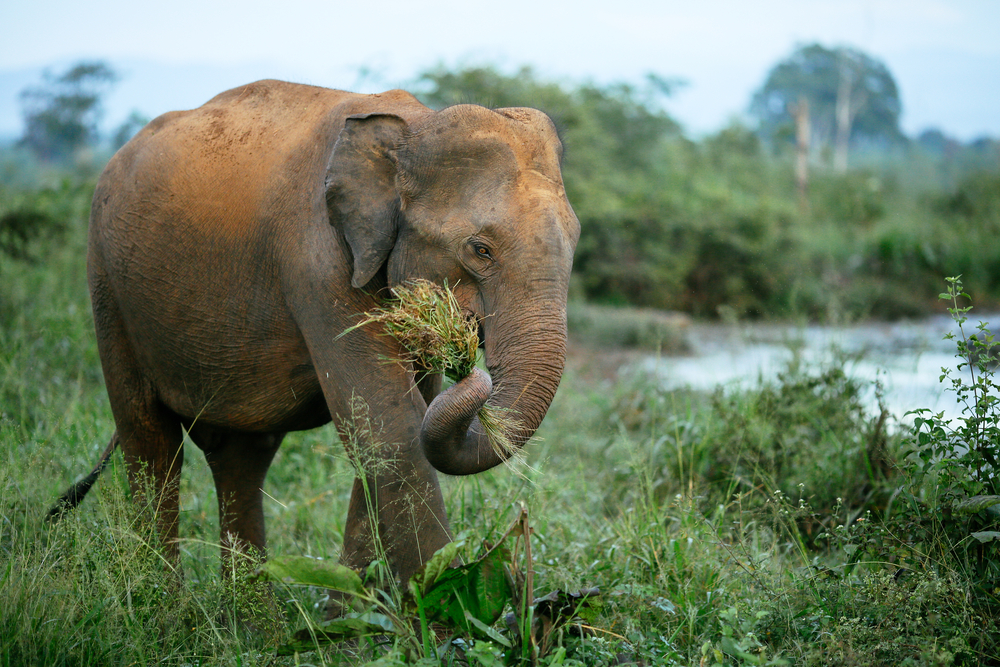 Seeds, tree barks and undigested grasses can all be identified from elephant dung (Photo Credit: Bene_A/Shutterstock)

Gene flow is extremely crucial among wildlife populations, as it enables the transfer of genetic material between populations. Information about the amount of genetic variation (or how different one population is from another) is vital for the conservation and management of wildlife, including elephants. Population structure, on the other hand, gives us some idea of how many different populations there are in a given region.

With ongoing advancements in technology, scientists can learn more about elephants from their dung than ever before, suggesting that such methods could be applied to study other large or elusive mammals in the future!