The spine of an elephant is not designed to carry large amounts of weight on its back. Additionally, elephants must be tamed for such a practice, which can be inhumane.

Close your eyes and picture an elephant. Perhaps your first thought is of an elephant carrying something on its back. 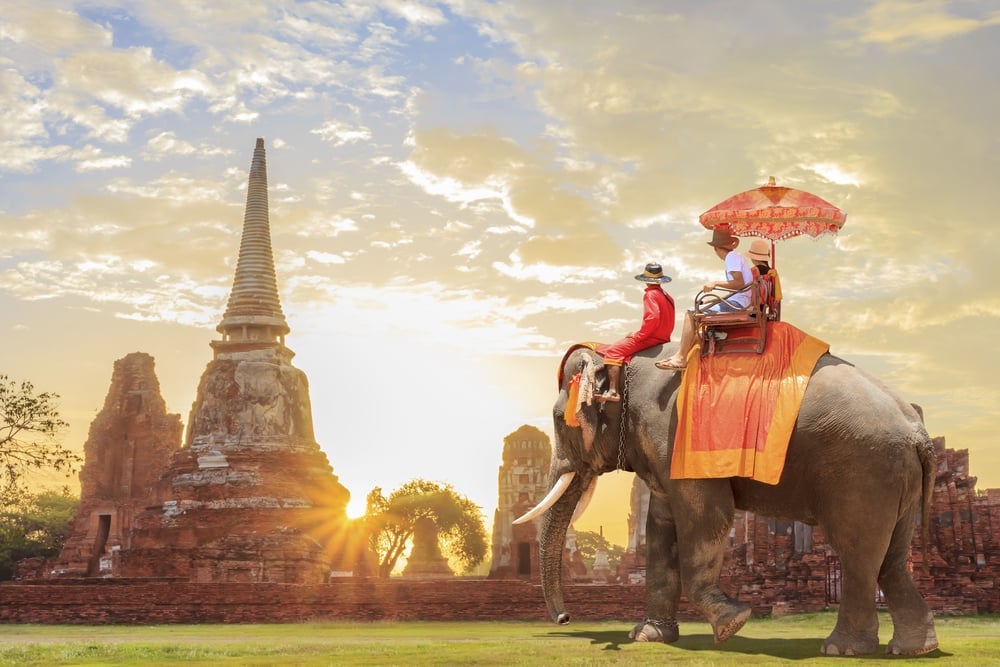 Tourist on an elephant tour of an ancient city (Photo Credit : Engineer studio/Shutterstock)

For more than 4,000 years, this is how many people have thought of elephants. Cultures have tamed these large and majestic animals to do work for which they are not built, both mentally and physically.

The History Of Elephants And People

There is an air of romance around riding an elephant, especially because elephants are a symbol of royalty in many Asian countries.

In the 16th and 17th centuries, around 130,000 elephants were said to have been kept in captivity.

Ancient Asian rulers used elephants like modern tanks, storming atop them into battle at about 30 km/hrs, trampling down enemy troops. In India and Sri Lanka, special weapons and armor were made for battle elephants. Iron chains with heavy steel balls at the end were tied to the trunks of war elephants, who were then trained to swirl them menacingly and with great skill. 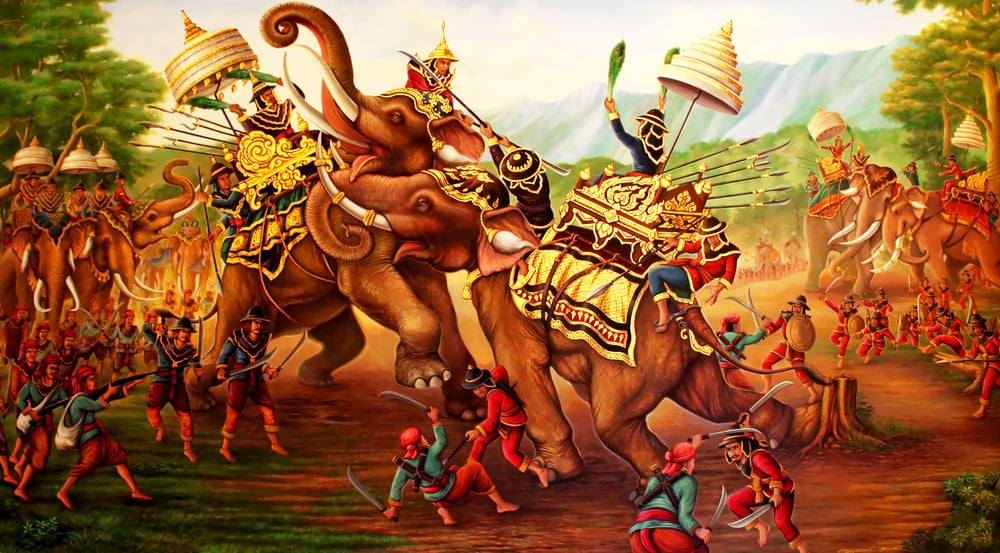 Off the battlefield, elephants were used to transport heavy goods, such as weapons and building materials. Even today, the timber industry in Asia uses elephants to haul and pull down trees. With the brute force of this giant mammal, trees are uprooted and the wood is pulled either by their trunks or by pulling a bunch of them to parked trucks.

Kings also used elephants when on the hunt, especially for tiger hunting. 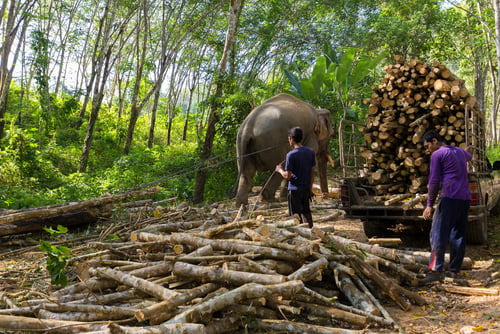 Use of elephants by the logging industry (Photo Credit : Stephane Bidouze/Shutterstock)

Today, instead of weapons, elephants carry tourists on their backs. Elephant trekking is a popular tourist activity in countries like Thailand. Every year, thousands of tourists flock to Southeast Asian countries to scratch this activity off their bucket list.

However, what they do not realize is that in 2014, a World Animal Protection initiative highlighted the cruel conditions in which these elephants were kept. Leading organizations, such as the Humane Society of the USA and the Association of Zoos and Aquariums, also object to elephant riding due to the abuse to which the animals are subjected during training and captivity.

The Mental Toll Of Captivity On Elephants

The first thing you should know about an elephant is that there is no way for you to climb on the back of a wild elephant and actually survive. All elephants used for such riding activities must be tamed. Elephant taming is also called elephant crushing or phajaan, and is a long-accepted tradition in Thai culture.

Also Read: Why Do Elephants Have Such Great Memory?

Young calves are separated from their mothers and shackled in a small room, then tortured with hooks and other sharp tools. To further crush their spirit, they are starved and deprived of sleep. This horrific, inhumane process is being carried out to turn this majestic wild animal into a submissive servant. Even adult elephants are tortured daily to keep them submissive.

In order to keep up with trekking, the Mahout or guide will often nudge the elephant with a hook to keep it moving. Elephants remember the hook from the “taming process” and fear immediately surges within them. Sometimes, this fear can lead to a reaction that endangers not only the elephant, but also the riders.

The Physical Impact Of Labor On Elephants

Now, the spine of an elephant is anatomically not built to carry weight on its back. The combined weight of the mahout, the carriage/seat and the passengers is simply too much for the elephant’s back. Carol Buckley, who specializes in trauma recovery and ongoing physical care of captive elephants, says that elephants have evolved to carry enormous amounts of weight suspended below their spine.

Unlike the smooth, round spinal disks of other mammals, elephants have sharp bony protrusions that extend from the spine in an upwards direction. These bony protrusions and the tissue that protects them are vulnerable to weight and pressure from above. Thus, when passengers sit on the back of an elephant, they put pressure on these spiny bone structures, which feel like needles stabbing their skin from the inside. 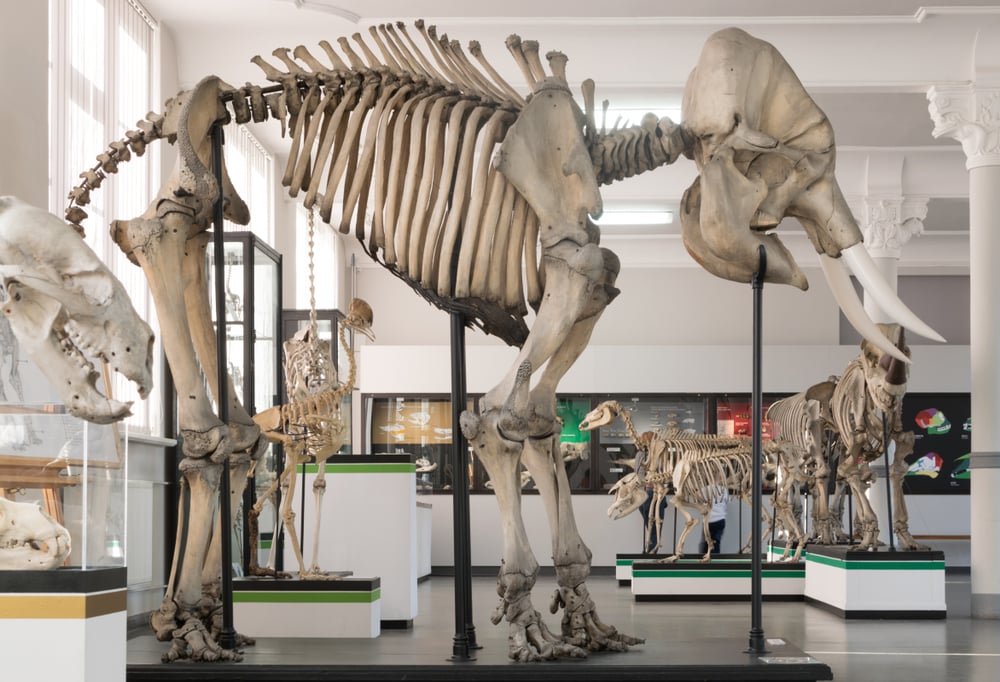 An elephant is often forced to carry about 450 kg on its back, taking into account the combined weights of a mahout and up to four adult tourists.  To make matters worse, the carriages remain on the elephant’s back, even when resting.

Prolonged bruising of these back tissues can lead to severe damage to the spine of an elephant. Elephants with permanent spinal damage are removed from the workforce and often abandoned.

It is evident that the elephants we meet on our exotic holidays are unfortunately no longer elephants in their truest form. They have been beaten and abused for so long that they have lost their sense of being.

However, like humans, elephants are very social animals, but they are deliberately kept away from other elephants and not allowed to interact.

Many travelers report seeing elephants rocking, pacing and bobbing their heads at trekking camps, all of which are signs of serious psychological stress. In the end, these beautiful creatures have been reduced to empty pods, lugging around tourists until the day their backs give way. 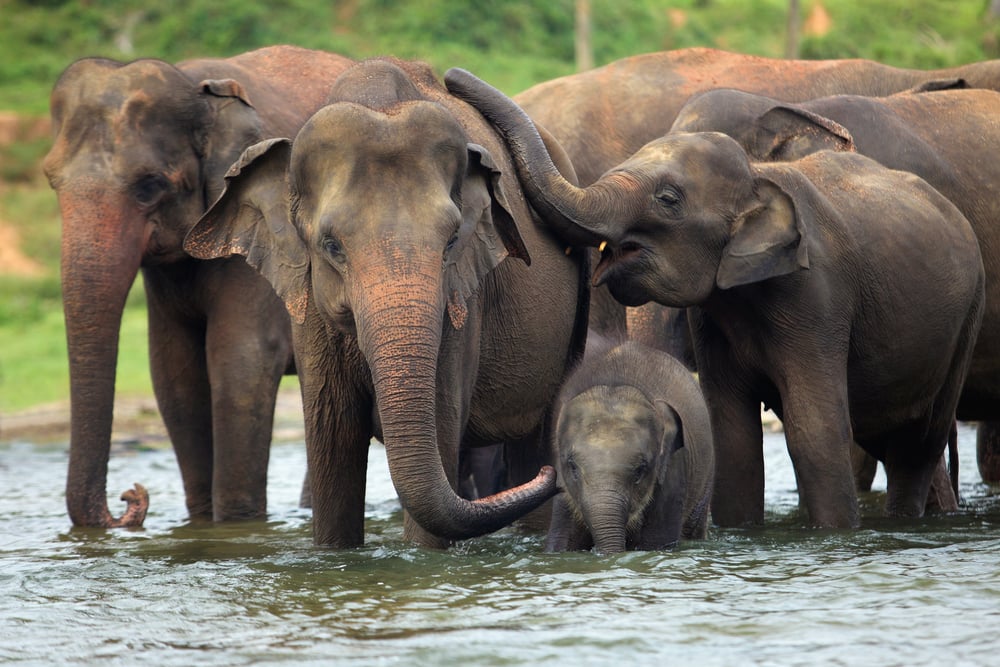 The silver lining is that many travelers have become aware of these cruel methods and are now looking for other humane ways to interact with these peaceful giants.

Also Read: What Can We Learn About Elephants From Their Dung?

Starting in 2020, excursions led by the Intrepid Foundation to Laos will include an experience where travelers can see elephants roaming and swimming in their natural habitat in MandaLao, the country’s first non-riding elephant sanctuary. Many tourists traveling to Thailand also opt to visit the ChangChill Elephant Sanctuary in Chiang Mai, where they can observe elephants grazing and socializing from a safe distance.

Basically, if you want to interact with an elephant—and it truly is an unforgettable experience—make sure it’s done in a humane and respectful way!