Red lasers are lights of a longer wavelength that can be produced using a simple diode; this option is cheaper and thus more popularly used in the market.

All of us, at some point in time, have come across a laser. Cashiers at the supermarket use them to scan the barcode on your groceries. Professors use them to draw students’ attention to specific items of a presumably mundane presentation. Cat owners use them to distract their munchkins and turn them into YouTube sensations. 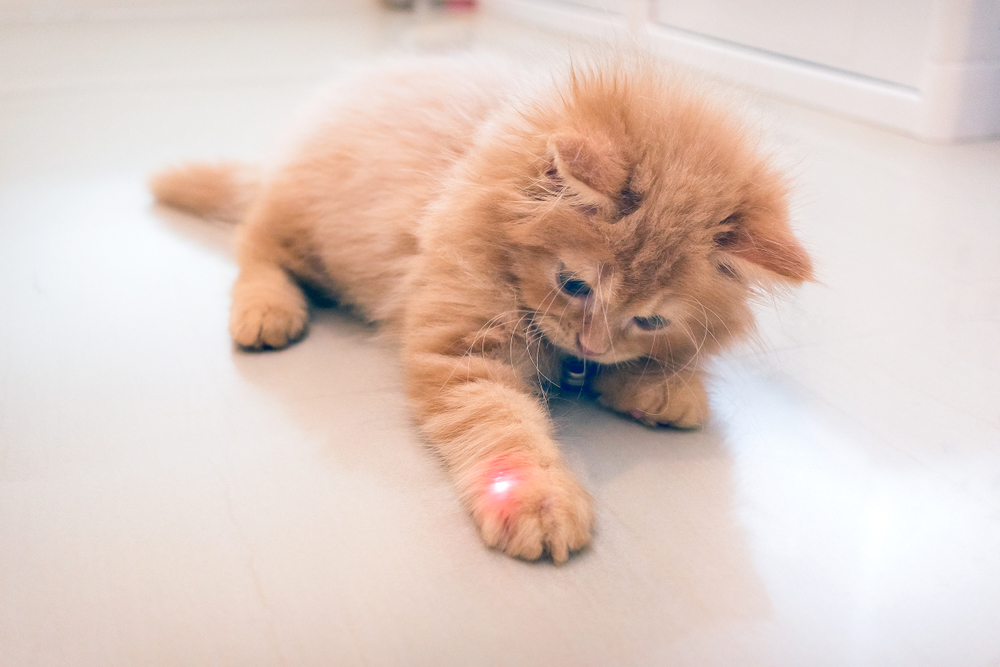 Arguably the most popular use of a laser pointer (Photo Credit : Seika Chujo/Shutterstock)

Basically, we’re all quite familiar with the little red dot from some area of life, which got me thinking, why red? We have natural light that splits into seven of its constituent colors when we pass it through a prism. Why then, do most laser pointers just give us one of the seven colors?

Long story short, it’s simply cheaper to produce laser pointers that emit a red light over any other variations. Brilliant minds who have developed laser pointers in other colors, but red laser pointers continue to make the most economic sense. Therefore, they’re the product of choice for mass production and thus the most popular item on the shelf.

So, why is it cheaper to produce a red laser pointer than a laser of any other color? To understand this, let’s look into what these laser pointers actually are and how they work.

What Is A Laser?

A laser is essentially a highly focused light source with amplified brightness. In fact, the word laser is an acronym that stands for Light Amplification by Stimulated Emission of Radiation (LASER).

A laser is produced when the electrons of certain materials, such as glass, crystal, diamond, etc., are energized by the absorption of energy from an electric current. Energized electrons jump from lower orbitals to higher orbitals within the atom. As they return to ‘normal’, i.e. ground state, these previously energized electrons release energy in the form of photons. All of the photons released during this interaction tend to be ‘coherent’ – the crests and troughs of every light wave match up precisely, so they’re all of the same color. 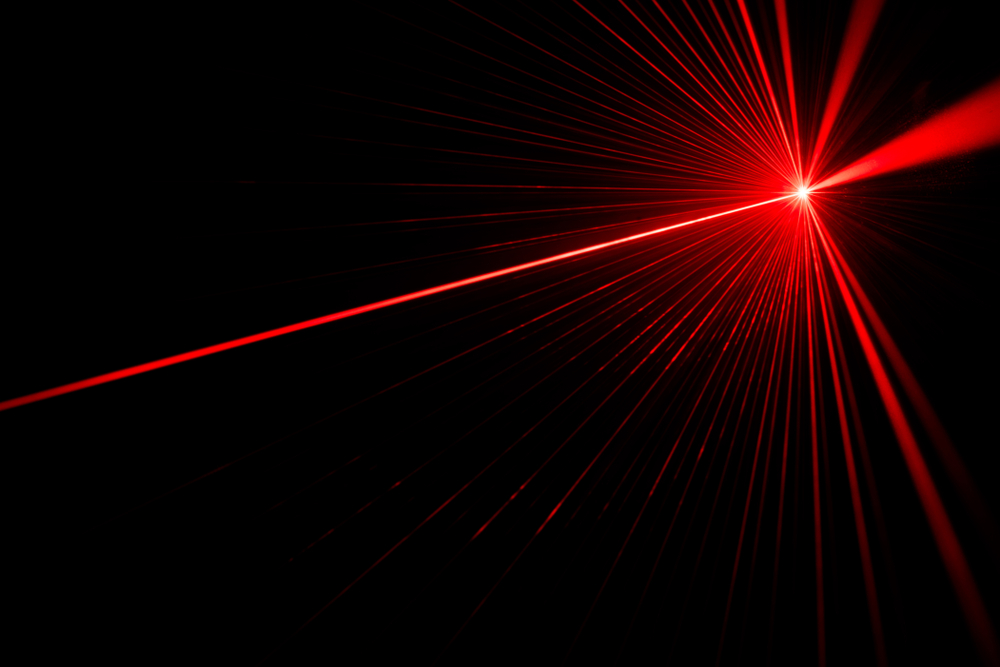 As more energy is supplied to the glass/crystal, several electrons are energized. This is known as pumping. They move as one to a higher energy state and then back to the ground state. This phenomenon is called population inversion. Population inversion leads to a larger burst of energy, which creates a sort of avalanche of light, known as stimulated emission. This huge burst of energy, concentrated at a single point, becomes a laser light.

Who Invented The Laser?

The first laser was devised by a physicist named Theodore Maiman while working at Hughes Research Laboratories in Malibu in 1960. His laser utilized a rod of synthetic ruby, silvered at the ends, which were cut in such a way that the beam of light would ricochet inside it, gaining brightness before coming out the other side. The contraption emitted a narrow, bright beam of light with a wavelength of 694 nanometers.

Also Read: Are Laser Beams Visible Like In The Movies? 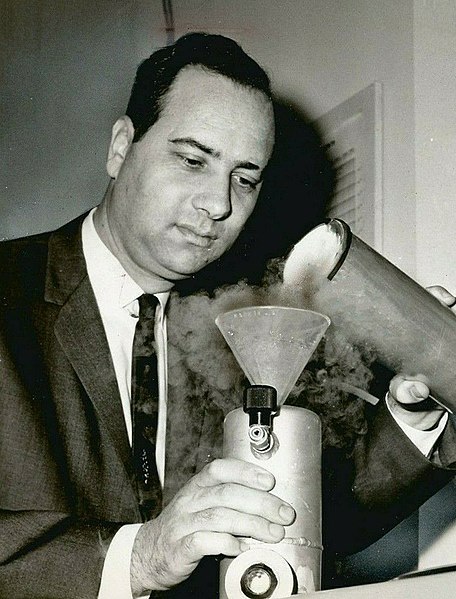 Amusingly, when Maiman showcased his findings to the scientific community, the laser was famously termed “a solution looking for a problem”. Clearly, they weren’t looking hard enough for problems yet, as his research paper was rejected by the popular science journal, Physical Review Letters. Subsequently, another equally selective physics journal, Nature, agreed to publish his findings, which led to what some might call a “laser boom”.

How Do Different Laser Pointers Work? 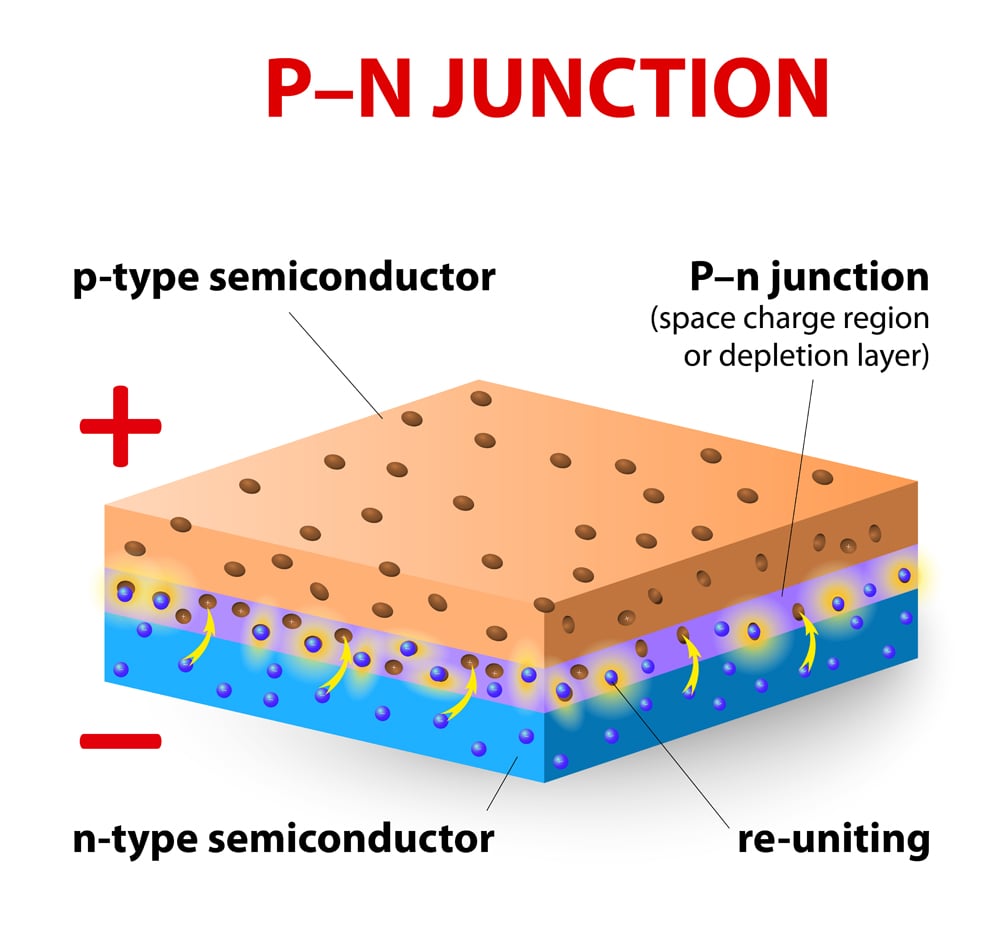 Why Are Most Laser Pointers Red?

The light that emerges from a simple semiconductor diode of shelf-bought lasers tends to be in the wavelength range of 700-800 nanometers, thereby ranging from orange to red in color. 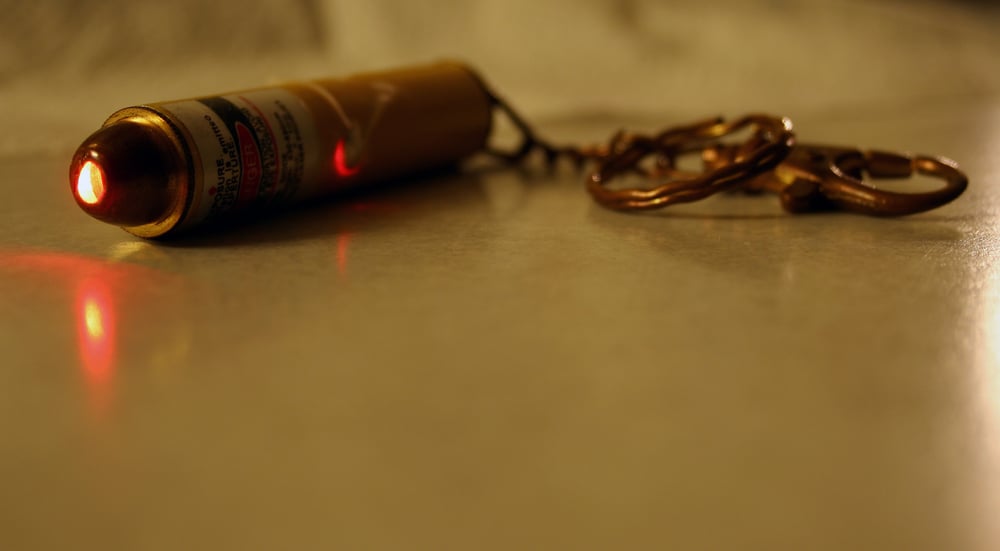 However, research suggests not red, but green lasers to be the most captivating light source since the human eye is more sensitive to that particular wavelength. It glows brighter and can reach distances far greater than a red laser.

In order to produce a green laser, the wavelength of the emergent light must be below 600 nanometers. Producing a focused beam of light at a low wavelength is complicated.

Also Read: Where Do The Photons Produced By A Source Of Light Come From?

First, a standard semiconductor diode emits a laser light of about 800 nanometers. This light is focused onto a neodymium crystal, which converts it into an infrared beam of 1000 nanometers in wavelength. Finally, the resultant beam is passed through a specialized frequency doubling crystal, after which it emerges as a green light with a wavelength of 530-540 nanometers.

Clearly, producing a green laser light requires a few more specialized components, so red laser lights are the most cost-effective to produce and still remain the most popular variety of laser on the market.