Light wavelengths at the red end of the spectrum stimulate the rods only to a slight degree, while allowing the cones to function reasonably well. This allows the eyes to adapt to the dark quicker.

When you suddenly leave a dark room and step into a bright playground, you invariably find yourself squinting. The bright onslaught of the sun seems almost blinding! On the other hand, when you walk inside a dimly lit room right after a long stint in the sun, you find your eyes growing wide, trying to make sense of your suddenly dark surroundings.

Basically, it takes a while for our eyes to adapt when we move from a bright to dimly lit area, or vice-versa.

Now that brings us to the question: certain professionals require maximal visual sensitivity in dim light, such as radiologists and pilots… how do they adapt to sudden changes in brightness?

Well, quite simply, they wear red goggles in bright light!

Let’s find out… but not before we go through some of the basics. 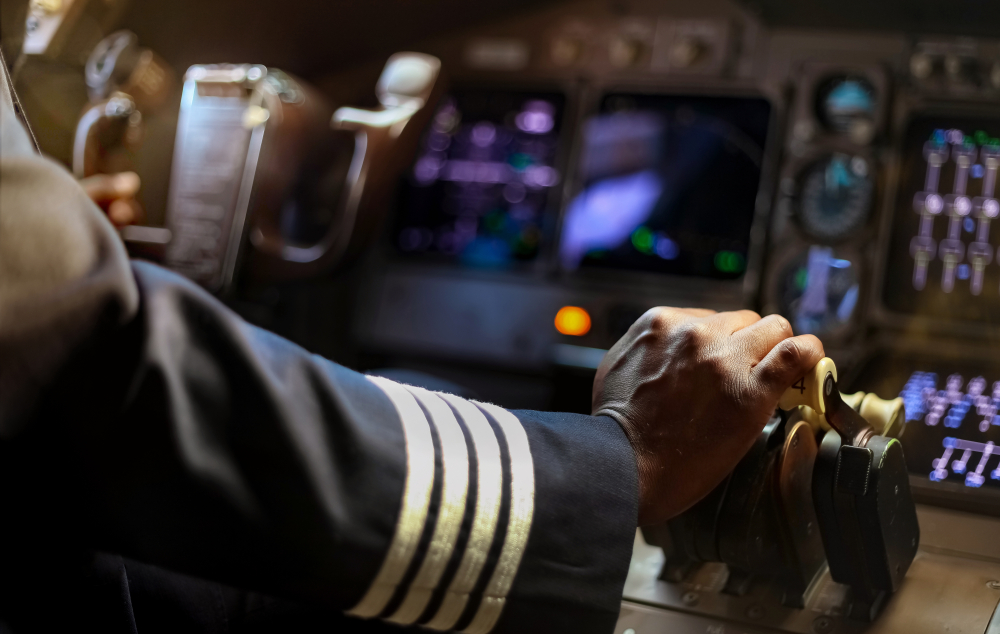 Anatomy of the eye

The eye is shaped like a sphere that is elongated horizontally, with only its anterior one-sixth being visible. The rest of the eye is contained within the eye socket of the skull.

The eye consists of three layers: the outermost fibrous layer, the middle vascular layer, and the inner neural layer.

The outer fibrous layer contains two main structures: the sclera and the cornea. The sclera is the ‘white’ of the eye and the cornea is the transparent part.

The middle vascular layer consists of the iris, the pupil, the choroid and the ciliary body. The pupil is like an aperture through which light enters the eye, while the iris is like a shutter that controls the amount of light getting in.

The third and innermost layer of the eye is the retina. This is like the screen on which images of the outside world are formed. The retina is the light-sensitive neural layer of the eye that contains the photoreceptors, called rods and cones. Photoreceptors are specialized neurons that detect light and send visual impulses in the form of electrical signals to the brain. 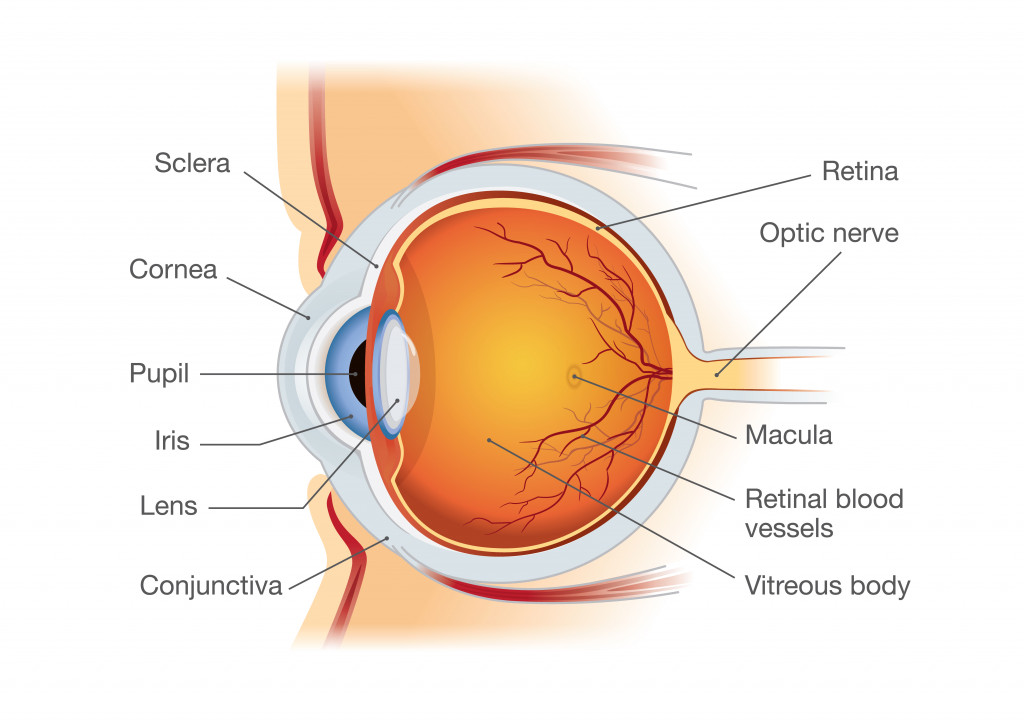 This diagram shows the human eye with its various parts from a side view .(Photo Credit : solar22/Shutterstock)

Photoreception is the process that describes how photoreceptors like rods and cones absorb light waves entering the eye and convert them into electrical signals, which are then sent to the brain for visual processing.

They have an outer segment, which is the portion of the receptor that detects light, as well as an inner segment that contains the cell body. Lastly, photoreceptors have a synaptic terminal connecting them to interneurons, which help propagate the signal to the optic nerve.

Rods are mostly located in the periphery of the retina. The outer segment of rods have folds of cell membrane that form discs, like the pleats on a curtain. These discs have a dense concentration of a protein called rhodopsin, which gets activated by light. Rhodopsin is also called the ‘visual purple’.

Rods contain high amounts of rhodopsin, so they are extremely sensitive to light; it only takes a single photon of light to activate a rod. That’s why rods allow us to see even in dim lighting conditions, i.e., at night. However, rhodopsin cannot differentiate between different wavelengths of light, so it only allows for black and white vision. 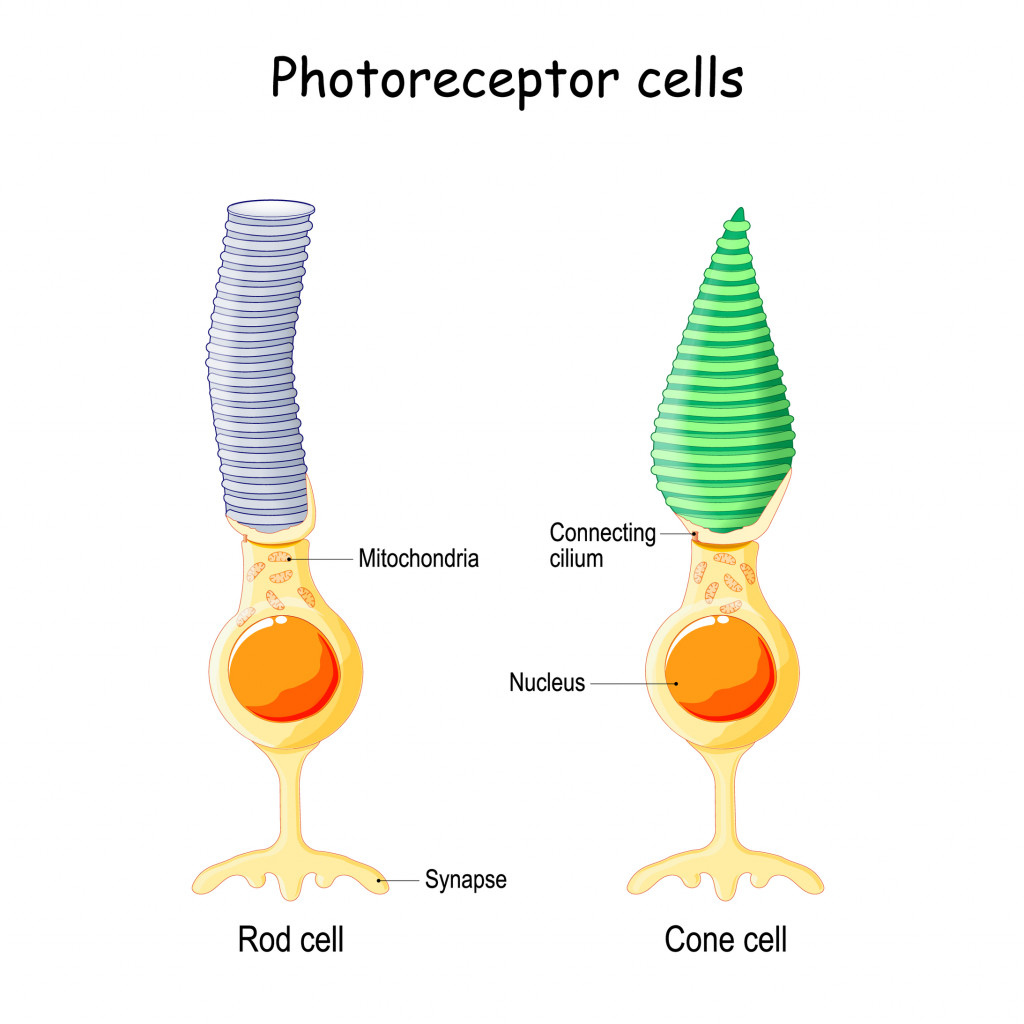 This diagram shows the structure of a rod cell and a cone cell.(Photo Credit : Designua/Shutterstock)

Cones are concentrated at the fovea, a small depression in the retina. They make the fovea the area of highest visual acuity. Like rods, cones also have folds of cell membrane that form discs. However, unlike rods, which are shaped like cylinders, the outer segment of cones is shaped like an ice cream cone, which explains the name.

In cones, the discs are covered by a low concentration of a protein called photopsin (another molecule that is activated by light). Thus, cones have a relatively low sensitivity to light and require hundreds of light photons to become activated. Hence, cones are mainly useful in bright light conditions, i.e., during the day.

However, cones primarily help us detect color. There are three different types of cone cells—red, green and blue—and each is covered by a different type of photopsin that’s only activated by a certain wavelength of light. Their combination helps us see all possible colors!

Dark adaptation is the ability of the eye to become more visually sensitive to light after remaining in darkness for a period of time. In bright light, rhodopsin—the visual pigment of rods—is continuously broken down. The time it takes to regenerate rhodopsin is called dark adaptation. Dark adaptation takes around 20 minutes, since time is required to build up the rhodopsin required for the proper functioning of rods.

Conversely, when someone moves from a dim to a bright environment, the light can seem intense and uncomfortably bright until the eyes adapt to the brightness. This process occurs over a period of 5 minutes and is called light adaptation.

Radiologists, aircraft pilots and other people who need maximal visual sensitivity in dim lighting can avoid having to wait for 20 minutes in the dark to become dark-adapted if they wear red goggles in bright light.

Light wavelengths at the red end of the spectrum stimulate the rods only to a slight degree, while allowing the cones to function reasonably well. Therefore, a person wearing red glasses can see in bright light during the time it would normally take for the rods to become adapted to the dark.

So, the next time you see a pilot wearing cool shades, remember that it’s not just for style! 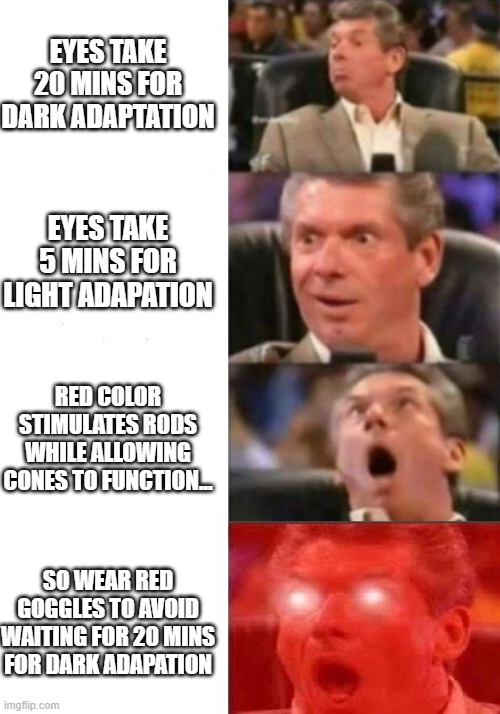 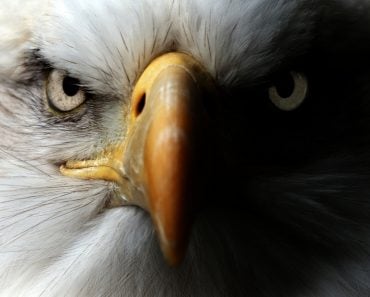