LiFi is a new wireless communication technology that uses visible light to transmit data. It is said to be able to provide 100 times faster internet connectivity than existing WiFi offerings. LiFi works by using visible light, like the light that is emitted by any regular lamp or bulb, to transmit data. The advantage of LiFi is that it uses the visible light spectrum, which is almost 10,000 times larger than the spectrum occupied by radio waves.

Recently, there have been countless discussions and debates around a fancy new technology referred to as ‘LiFi’. However, the part of the whole affair that raised eyebrows around the world was the claim that LiFi can provide 100 times faster internet connectivity than existing WiFi offerings!

For those who haven’t followed the announcements regarding the arrival of LiFi, let’s take a closer look at what LiFi actually is and how it’s going to transform the world of internet connectivity.

LiFi is a high-speed wireless communication technology that uses visible light (presently using LEDs) to transmit information. WiFi and LiFi are similar because both technologies are wireless, but also very different, because unlike WiFi, which relies on radio waves, LiFi uses visible light communication (VLC) or infrared and near-UV spectrum waves. In other words, LiFi works by using visible light, like the light that is emitted by any regular lamp or bulb!How Does it Work? 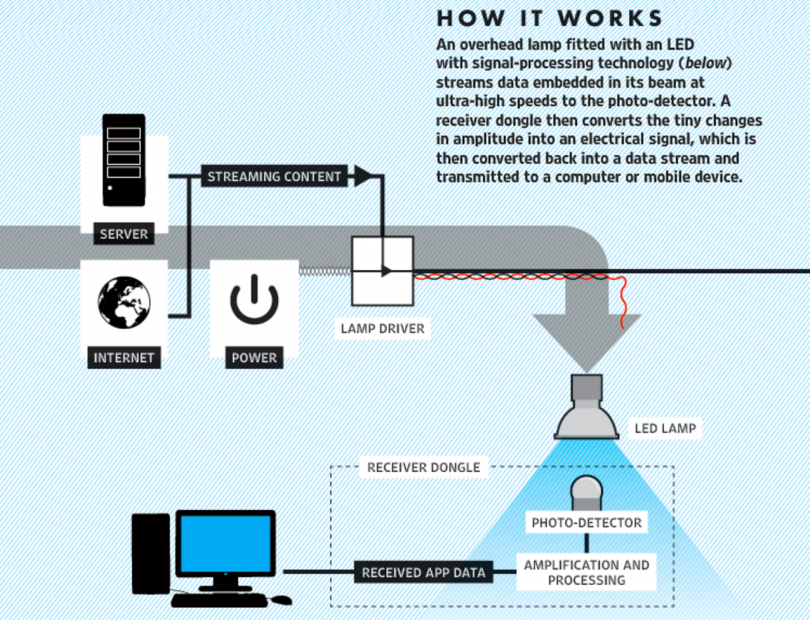 When a constant current is applied to an LED (LED lamps are commonly found in households and offices nowadays), tiny packets of energy (called photons) are released, which we perceive as visible light. If the input current to the LED is varied slightly, the intensity of the light output also varies. However, the good thing is that such small variations in the intensity of light is imperceptible by human eyes. Since LEDs are semiconductor devices, the current and the optical output (the light produced by LEDs) can be modulated at very high speeds, which is then detected by a photodetector device that converts it back to electric current.

In this way, LiFi technology uses light from LED lights to transmit data and provide much faster Internet connectivity. 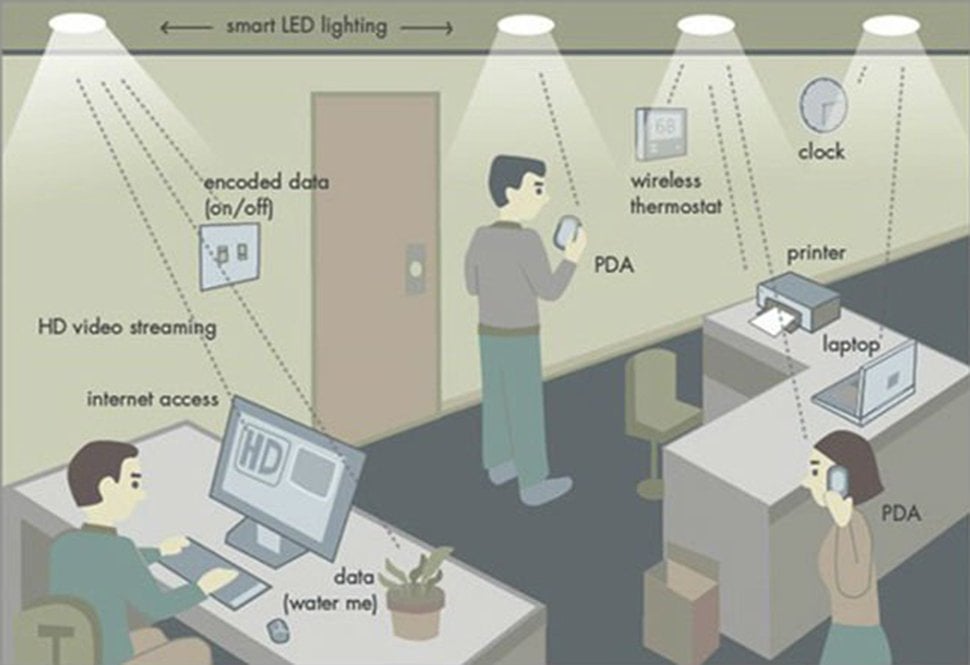 Since we are already largely dependent on visible light from lamps and bulbs, LiFi presents many unprecedented advantages for its uptake and use, as far as wireless Internet connectivity is concerned.

Lights are almost everywhere you go – in your room, in halls and auditoriums, in cafes…. it’s impossible to make a complete list of places where you can easily find a source of light. If this new trend catches on, then where there’s light, there will be Internet connectivity through LiFi. As mentioned above, LiFi relies on visible light to communicate, which is a good thing in more ways than one. These waves are able to carry far more information than the traditional radio waves used in WiFi technology.

The visible light spectrum is almost 10,000 times larger than the spectrum occupied by radio waves. Also, LiFi is said to increase bandwidth by 100 times what we have today with WiFi. This incredible feat is only possible because a LiFi connection can transmit data at the rate of 224 gigabytes per second!

LiFi is also more suitable in electromagnetic-sensitive areas like hospitals, airplane cabins, and nuclear power plants (where electromagnetic disturbance can be disastrous).

The Downside Of LiFi

Along with all these benefits, there are also some disadvantages of a LiFi connection. Since it uses visible light to transmit data, LiFi would be rather useless in conditions where there is no light. That means no Internet while lying in your bed at night. If you have a WiFI router installed in one room of your house, you can connect your devices sitting anywhere in the house, but this is not the case with LiFi. Since visible rays cannot pass through walls, you have to be in the immediate vicinity of the source of light to access the Internet on your device, which may not sound particularly convenient to many people.

This technology is also said to be less reliable (again, due to it being dependent on visible light) and has high installation charges.

There’s no doubt that LiFi is going to transform the world of Internet connectivity, but it seems unlikely that its rise would necessarily mean the death of WiFi, since the latter is deeply embedded in the lifestyles of billions of people. A more likely scenario, though, is that we’ll eventually have a wide range of technologies available at our disposal and will be free to choose the most appropriate one. Having that flexibility certainly seems like the most desirable scenario to me!