Fiber-optic cables are better than copper wires for signal transmission because they have more bandwidth, they are less susceptible to interference, they are smaller and lighter, and they are more durable.

Before the age of wireless Internet, we had wired, dial-up Internet. This type of connection used the phone line to connect to the Internet. Countless hours were spent praying for the connection to be successful. Back then, fast Internet was definitely a luxury.

Then, broadband connections entered the picture, which completely changed the Internet scene. Speeds of 2-10 mbps became common. However, this still used good old copper wires as the transmission medium. 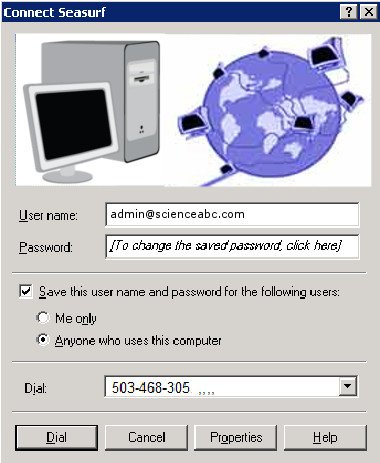 We were at the mercy of the dial up connection.

A little over 10 years ago, Internet providers began using fiber as a medium to transmit the signal. The reason for this was that the transmission occurred with minimal losses, thereby providing much faster Internet speeds. In 2014, a research group at the Technical University of Denmark (DTU) managed to squeeze 43 terabits per second over a single optical fiber with just one laser transmitter!

So, what makes fiber-optic technology so much more efficient than copper wires? To answer that question, we need to understand how the two mediums of transmission work.

Copper communication works by sending electrical pulses through a copper wire. The strength of the signal determines how much of it will be retained by the time it reaches its destination. At the destination (e.g. the router), the wire’s electromagnetic field is constantly monitored for changes. As the field gets stronger, the destination registers a ‘1’  (logic high). If it dips below a certain measurement, a ‘0’ (logic low) is registered.

Fiber-optic cable is made from fine hair-like glass fibers that carry light impulses transmitted by an LED or laser. Data in optic fiber is transmitted in the form of light. 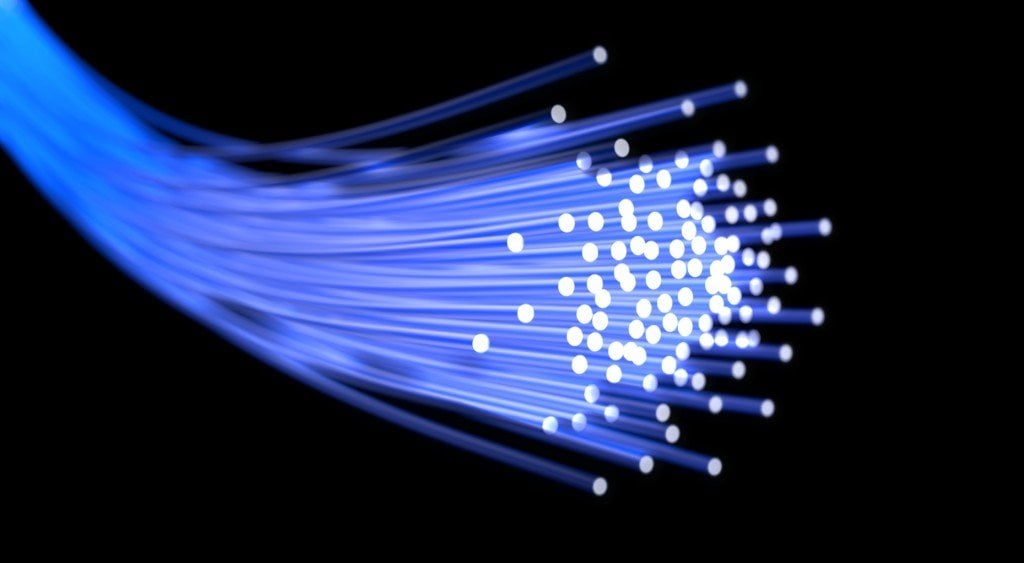 Imagine a long, flexible pipe, with its insides perfectly coated with mirrors. Look through one end, and ask a friend to flash a source of light (a torch or laser) through the other end. The light will reach your end, regardless of whether the pipe is straight, curved or twisted. This is because light will reflect off the sides of the pipe with almost negligible losses. While making a tube out of mirrors would work, it would be bulky and difficult to make. Therefore, optic fibers use glass instead of mirrors.

Glass is incredibly pure, so that even if it is several miles long, light can still make it through. The glass is drawn into a very thin strand, with a thickness comparable to that of a human hair. The glass strand is then coated in two layers of plastic. For transmitting light over long distances, it employs the principle of total internal reflection.

Light rays traveling from a dense medium to a less dense medium speed up at the boundary. This causes the rays to bend when they pass from glass to air at an angle other than 90º. This is called refraction. In this case, the two layers of plastic form the two mediums on which the reflections occur.

The condition that needs to be satisfied for total internal reflection to occur is shown in the gif. (Image source: science.uniserve.edu.au)

Beyond a certain angle, called the critical angle, all the waves reflect back into the glass. We say that they are totally internally reflected. The light rays stay inside the optic fiber and are transmitted over long distances with negligible loss.

This is the essence of a fiber optic cable.

Fiber provides more bandwidth than copper and has standardized performance up to 10 Gbps and beyond, something that it is impossible to achieve when using copper. More bandwidth means that fiber can carry more information with far greater efficiency than copper wire.

Since data travels in the form of light (in total internal reflections, the loss of quality is negligible) in fiber-optic cables, very little signal loss occurs during transmission and data can move at higher speeds and greater distances.

The bandwidth and distance of transmission is significantly higher in optical fibers. (Image source : datatrend.com)

3) Not susceptible to interference

Fiber-optic cable is also much less susceptible to noise and electromagnetic interference than copper wire. For example, over a distance of two kilometers, copper wire would experience a great deal of degradation in quality, while there would be virtually none over the same distance using fiber-optic cable. It is so efficient,  in fact, that roughly 99.7% of the signal reaches the router in most cases.

Fiber optic cable is much thinner and lighter than copper cable. It can be used more efficiently in confined underground pipes, and is also much stronger, with eight times the pulling tension of copper wire. Furthermore, it has strength members and stiffeners that make it much harder to damage or kink. 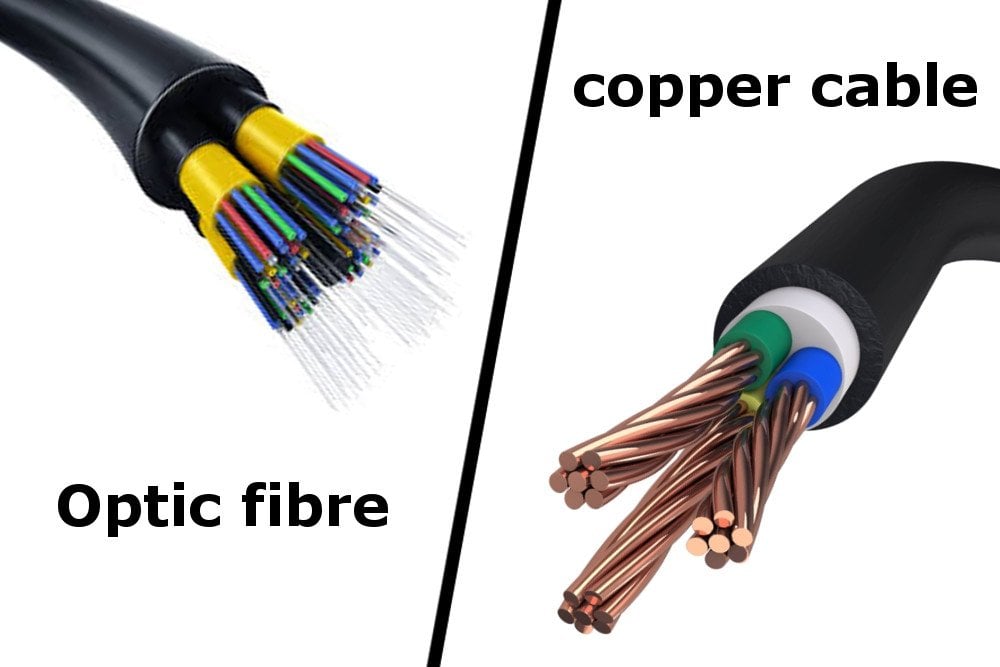 Optic fibre is much lighter and thinner compared to the conventional copper cable.

Although the material for fiber is much more expensive than its copper counterpart, in the long run, the working cost is much less. Typically, it has less of a maintenance cost and requires less networking hardware.

Fiber-optic cable is completely immune to many environmental factors that affect copper cable. The core is made of glass, which is an insulator, so no electric current can flow through. You can run fiber cable next to industrial equipment without any worries. Fiber is also less susceptible to temperature fluctuations than copper and can be submerged in water. 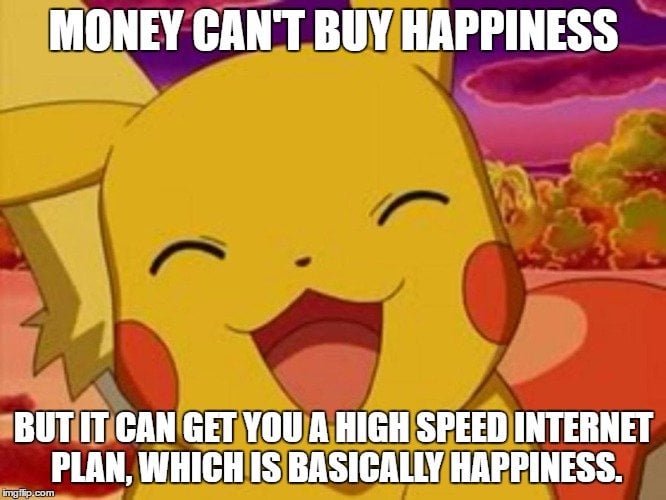 With ever-increasing Internet speeds, perhaps there will be a time when people once again long for slow Internet speeds. Actually, on second though…. maybe that’s stretching things a bit too far!