The Wilson Cloud Chamber is a particle detector that reveals the track of sub-atomic particles & radiation in the form of a mist trail; it was used primarily in the early 1900s.

Did you know that you can see the passage of subatomic particles (and radiation) from the comfort of your couch using only some alcohol, a transparent container, and dry ice?

Don’t worry, I didn’t know either!

As it turns out, the aforementioned components, along with a few supportive and protective pieces of equipment, are enough to build a cloud chamber—a type of particle detector—used for observing radiation. While use of the Wilson Cloud Chamber is mostly a thing of the past now, the apparatus helped in the discovery of positrons and muons (subatomic particles), among other things, making it one of the most important inventions in the field of particle physics. 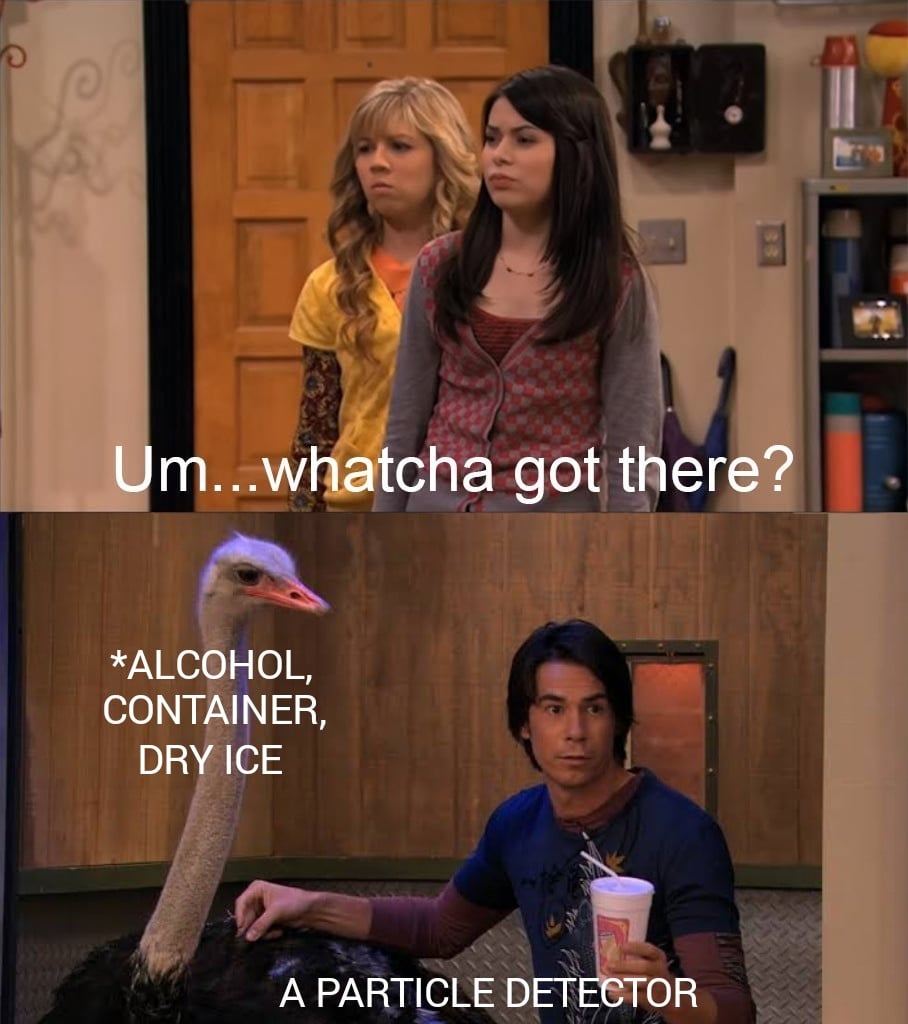 Construction Of The Wilson Cloud Chamber

The chamber was invented by Charles Wilson in the mid-1890s and was originally used for creating small clouds and studying the optical phenomena related to them, hence the name cloud chamber. Subsequent studies and observations made using the apparatus led him to realize that the chamber could also be used to observe the movement of subatomic particles. Nearly 20 years later, Wilson perfected his design and developed one of the world’s first particle detectors.

Wilson’s original cloud chamber consisted of three individual sub-chambers (sensitive chamber, control chamber and vacuum chamber), a water-sealed piston and a few valves. The sensitive chamber was a sealed enclosure filled with saturated air (air with 100% relative humidity, i.e, the air is holding the maximum amount of water vapor it can at the prevailing temperature and pressure).  The passage of subatomic particles could be seen in this section. 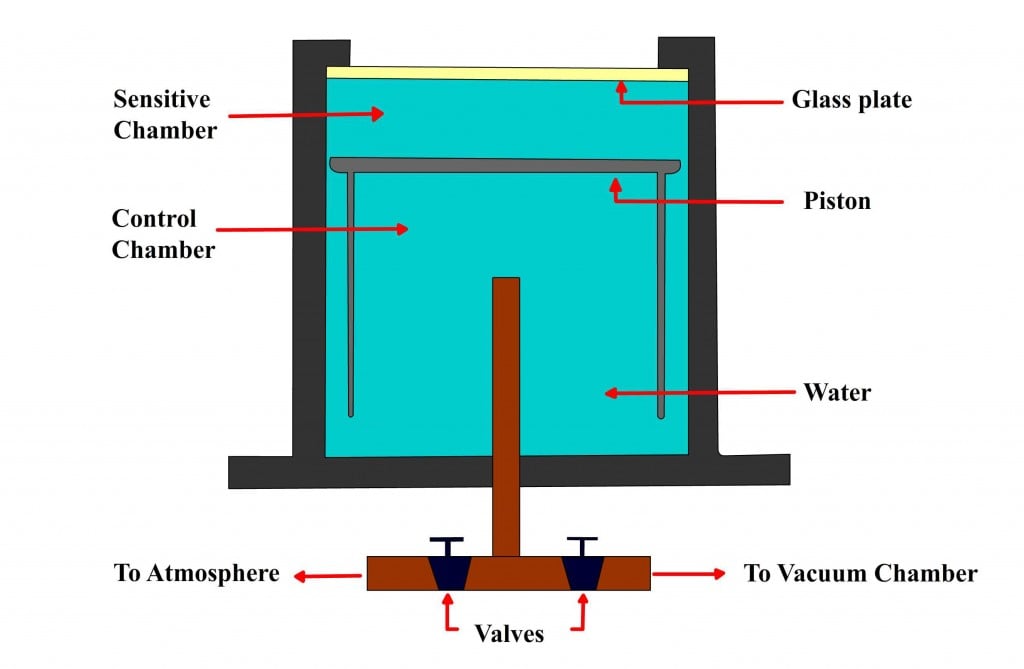 The closing of the air intake valve was followed by the opening of an exhaust valve installed between the control and vacuum chamber. The valve allowed the air in the control chamber to escape, which made room for the air in the sensitive chamber to expand and push the piston down. Due to this repeated compression-expansion cycle of the air, Wilson’s cloud chamber is also known as an expansion cloud chamber. However, the piston resulted in a jerky motion and was later replaced with a rubber diaphragm.

Working Of A Wilson Cloud Chamber

The cloud chamber does not display subatomic particles themselves, but reveals their tracks in the form of a fine mist, resulting from the condensation of the operating vapor. The passage of each individual subatomic particle results in a unique mist/cloud trail, which helps to identify them and study their properties and behavior.

Also Read: What Is A Geiger Counter And How Does It Work?

The cloud chamber’s operation starts with the expansion of the saturated air and the downward displacement of the piston. Here, according to the first law of thermodynamics, air performs work on the piston at the expense of its internal energy. A decrease in the air’s internal energy is mirrored by a decrease in its temperature. Consequently, the saturated air attains a super-saturated state, where the vapor is just about to condense, but requires an extra impetus. This extra impetus is provided by the crossing of charged particles through the sensitive chamber.

Charged subatomic particles passing through the sensitive chamber ionize air molecules by knocking electrons out of their orbits. The ionized molecules attract one another and form a trail of ionized gas molecules. This trail acts as a condensation center for the supersaturated vapor and in the blink of an eye, small drops of water condense, forming a misty trail before settling down the chamber. The trails usually last for a few seconds and their characteristics depend on the ionizing particle. To obtain the best results, a source of radiation (a radioactive element) is normally used, but the chamber works even in the absence of a source, as there are cosmic-ray muons that continuously enter Earth’s atmosphere. The major drawbacks of Wilson’s original cloud chamber included a discontinuous flow of operation and the limited amount of particles that it could detect per second.

In 1936, Alexander Langsdorf constructed a diffusion cloud chamber that could continuously detect radiation and utilized alcohol, instead of water vapor, due to its lower freezing point. The diffusion cloud chamber simplified the construction of Wilson’s original cloud chamber by making use of a simple glass container with a warm top and a cold bottom. Ducts on either side helped to vaporize alcohol flowing into the container, while the bottom is usually cooled using dry ice.

The temperature difference between the top and the bottom surface provides a steep temperature gradient, nudging the saturated vapor to attain a super-saturated state. Since the temperature gradient is always maintained and the chamber does not make use of a piston to achieve this, the passage of radiation can be continuously detected. The rest of the working procedure remains identical to Wilson’s original cloud chamber.

For nearly 30 years, the Wilson Cloud Chamber was the prime particle detector and stood at the forefront of research in particle physics. The chamber’s 30-year reign concluded with the invention of other superior chambers, namely, the bubble chamber, spark chamber, wire chamber, etc.

Also Read: What Particle Are We Searching For In The Antarctic Ice?

The inventors of the above-mentioned particle detectors (Charles Wilson, Donald Glaser & Georges Charpak, respectively) were all awarded Nobel Prizes in physics for constructing the paraphernalia for multiple essential studies in the field. Without those men and their machines, much of what we currently know about subatomic particles and radiation would still be shrouded in mystery!

How much do you know about the Wilson Cloud Chamber?