4G is the fourth generation of wireless mobile telecommunication technology. It is the successor of 3G and is ideally suited for services like HD video calling, live streaming, mapping and online gaming, thanks to its high download speeds. 4G LTE is a standard for high-speed wireless communication. It is commonly marketed as ‘4G LTE’, despite the fact that it does not actually meet the technical requirements of a 4G wireless network.

When mobile phones were still a novelty, few customers knew (or cared) what 2G was all about, despite the fact that the entire communication industry depended on it. However, as smartphones gradually gained ground in the wireless communication industry, the need for a faster Internet speed arose, which is when 3G was released. The wireless communication industry is hugely influenced by the popularity of smartphones (Photo Credit : Ollyy / Shutterstock)

Now that smartphones hugely dominate the telecom industry, and dramatically influence most other industries, including e-commerce, entertainment, information and technology, just to name a few, the widespread use of 4G is all but imminent. In fact, a number of telecom companies have already jumped on the bandwagon and started to launch 4G services in various parts of the world. The latest addition to this ever-growing trend is an Indian company called Reliance Jio, which was recently in the news for introducing the country’s first ever ‘4G LTE’ network.

Regardless of which company you’re discussing, have you noticed one rather unusual thing in the advertisements for all 4G service providers? Instead of marketing their services as simply ‘4G’, they use the words ‘4G LTE network’, along with a number of other words in their ads. 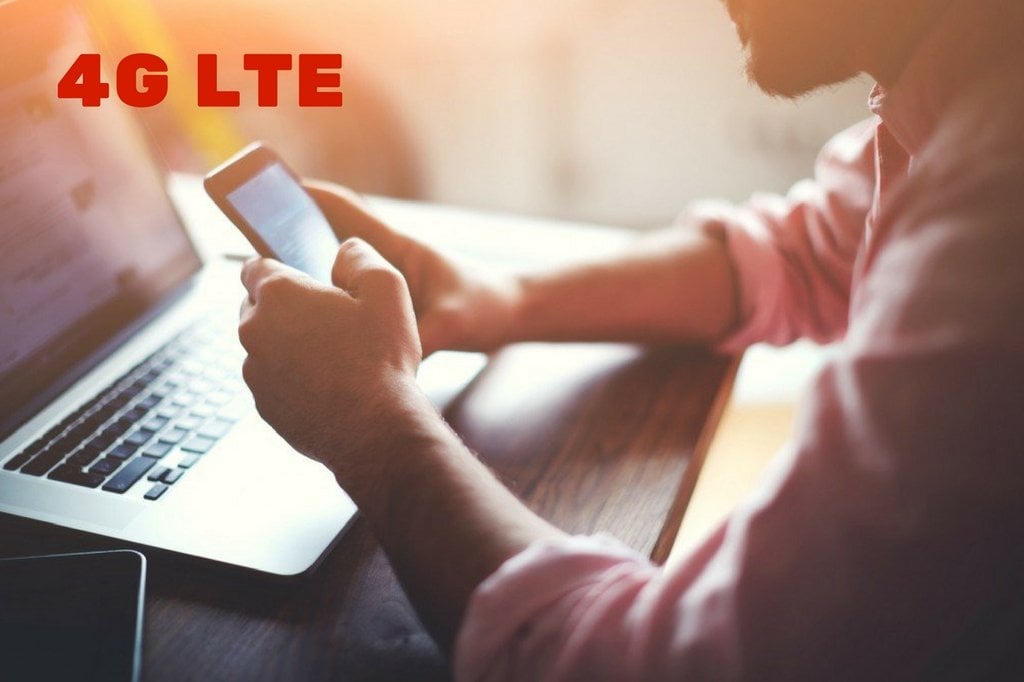 A lot of network providers market their services as ‘4G LTE’ instead of just ‘4G’ (Photo Credit : Shutterstock)

But why is that? Why couldn’t they simply call their services ‘4G’ and be done with it? Is ‘LTE’ an additional feature that is somehow better than just regular old ‘4G’? Simply put, are 4G and ‘4G LTE’ the same thing?

To understand this, we’ll have to take it from the top…

In the simplest terms, it is the fourth generation of wireless mobile telecommunication technology. A successor of 3G, it is ideally suited for services like HD video calling, live streaming, mapping and online gaming, thanks to its high download speeds. From a user perspective, 4G systems provide reliable and high-speed Internet connectivity on electronic devices, such as tablets and smartphones, among others. Note that simply being ‘faster’ than the existing 3G networks does not make a network ‘4G’. There is a set of predefined requirements that must be met first, which is where the problem starts. Let me explain this with the help of a story…

Once upon a time, an international authority on space travel announced that it would confer the title of ‘The Greatest Explorer’ to the first person who traveled to Jupiter and back. In a bid to claim the coveted title, a number of space travelers tried to reach Jupiter, but the farthest anyone could manage to reach was 100 million kilometers beyond Earth.

Then, a guy named Polo built a special spaceship and successfully travelled to Mars (which lies 225 million kilometers beyond Earth, between Earth and Jupiter) and back, shattering the earlier record of 100 million kilometer by a significant margin. Upon his return, the authority conferred him the title of ‘The Greatest Explorer’, even though he hadn’t reached Jupiter (which was the original requirement). Simply because he broke the 100-million kilometer record and his spaceship was much more advanced than its predecessors, the international authority concluded that he deserved to be called ‘The Greatest Explorer’. Polo was conferred the title of ‘The Greatest Explorer’ without actually fulfilling the original requirement, i.e. traveling to Jupiter and back; similarly, services which offered much faster speeds than 3G were allowed to be marketed as ‘4G’ without actually meeting the requirements of a true 4G system.

A few others copied his spaceship’s design and soon enough, a handful of rich space travelers made it to Mars and back as well. Thus, every one of them was legally allowed to be called ‘The Greatest Explorer’, despite the fact that no one had ever traveled to Jupiter, which was the original goal.

This is precisely what happened with 4G.

The International Telecommunications Union-Radio communications sector (ITU-R) – which is the ‘authority’ in our story – introduced a few technical requirements for a network to be called ‘4G’ (corresponding to the title of ‘The Greatest Explorer’) in March 2008.

The official logo of ITU; ITU is the United Nations’ specialized agency for information and communication technologies

According to these standards (corresponding to the feat of landing on Jupiter), if a network claimed to provide 4G services, then a connected device, say, a smartphone, should have access to a speed of 1 Gbps (1 Gigabits per second) when you’re sitting or moving around slightly (low mobility), and 100 Mbps while you’re traveling in a car or train (high mobility).

However, it was soon realized that the bar had been set too high; this notion was further cemented when the two top candidate systems of 4G networks (i.e. WIMAX and LTE) failed to provide such high Internet speeds. 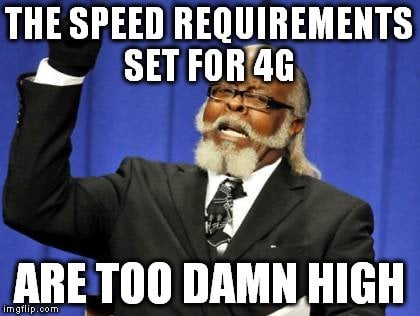 Still, the ITR allowed them to be marketed as ‘4G’, as these companies were using a substantially more advanced technology than their predecessors and provided significant improvements in Internet speeds to the systems currently in use. This is where LTE (corresponding to the guy named Polo) stepped into the picture.

LTE stands for Long-Term Evolution, and it is a standard for high-speed wireless communication. When the regulatory authority realized that the minimum speeds set for 4G were far out of reach, it allowed the technology being used to attain those high-speed standards to be marketed as ‘4G’, provided that it offered significant improvements to the ‘performance and capabilities’ offered by 3G. Boy, did telecom companies love that decision! Every major player in the telecommunications industry (in developed countries) jumped in and began to market their systems as ‘4G LTE’, effectively luring customers with the much-revered term ‘4G’ attached to their name, without actually attaining the required speeds for that coveted designation. Absolutely not! LTE offers much lower speeds than a true 4G network can offer; still, LTE is commonly marketed as ‘4G LTE’, despite the fact that it does not actually meet the technical requirements of a 4G wireless network, as specified by the ITU-R organization. That being said, it undoubtedly offers better speed than a 3G network.

Consider a network provider (say, Vodafone) that has limited access to all of the 2G, 3G and 4G systems. Since Vodafone’s 4G infrastructure is not very extensive, it offers its customers restricted usage of 4G data plans by charging premium rates. For handling other requirements, such as voice calls and messages, it switches to the 2G/3G systems. This is called Circuit Switched Fallback (CSFB). The biggest problem with using CSFB is that since it works on the relatively older ‘circuit-switched’ system, the company in question has to keep its 2G/3G systems running and incur those costs.

Note that 4G is exclusively designed to handle high-speed data transfer and therefore cannot handle regular mobile calls. Consequently, network providers that completely rely on a 4G LTE-only system and do not have any 2G/3G systems at their disposal (for example, Reliance Jio in India) have to use a completely different technology to connect calls on its 4G LTE systems. This is where VoLTE enters the picture. 4G bands generally support VoLTE (Voice over LTE), which is a technology specification that defines the standards for delivering voice calls over 4G LTE networks (rather than using 2G/3G networks).

You see, at the most basic level, your voice is also a form of data, and VoLTE is the technology that helps transmit voice calls over network carriers in the form of data. Not only does it seamlessly transmit and receive voice calls, but it significantly improves the quality of voice calls without adding any extra charges.

VoLTE has been around for a few years now Note that VoLTE is not a completely recent technological breakthrough; popular communication apps like Skype, Whatsapp, Viber and Hike have been offering so-called ‘free calls’ based on a VoLTE system for quite some time now. The thing is, they are not actually ‘free’; it’s just that the ‘amount’ is deducted from your allocated data plan in the form of megabytes, instead of coming out of your top-up balance in the form of dollars, thus giving you that much-celebrated ‘free voice calls’ impression.

With the staggering speed that the Internet is taking over most of the wireless communication industry through technologies like 4G LTE and VoLTE, it is not an exaggeration to say that it will, at some point, have absolute control over every form of digital communication.