WiFi—a novel wireless technology—has liberated us from the hassles of LAN cables so that we can access the all-important Internet! Sure, there are mobile internet technologies like 4G and 5G, which work well when you’re on the move, but for stability and speed, nothing beats WiFi.

To put it very simply, “802.11” represents IEEE protocol for wireless internet. The Institute of Electrical and Electronics Engineers (IEEE) are the people who regulate different communication protocols in the field of electronics. IEEE 802.11 is specifically devoted to standardizing wireless local area networks (WLAN), or more simply—a fixed-line wireless internet connection.

Thankfully, this confusing nomenclature of WiFi is changing.

What Are The Different WiFi Standards?

802.11 is now an obsolete WiFi standard. This legacy WiFi standard supported a maximum speed of 1 megabit per second (Mbps). I know this seems ridiculously low by today’s standards, but remember, this was way back in the late 90s when the Internet was just getting on its feet.

Like the raw 802.11 (legacy) version, 802.11b also worked on a 2.4 GHz frequency. As it operated in this generic frequency, the 802.11b standard (and other WiFi standards working only on 2.4 GHz) often suffered from interference with other appliances like microwave ovens, baby monitors, and cordless phones. 802.11b had a maximum speed of 11 Mbps.

As mentioned earlier, 802.11a was exclusively used in business applications, which is why you’re unlikely to find an 802.11a WiFi modem without some effort.

Despite releasing concurrently with 802.11b, both of them had visible differences. The first one was that 802.11a operated at a 5 GHz frequency, instead of 2.4 GHz, meaning that the chances of interfering with other appliances were negligible. Moreover, 802.11a had a better theoretical speed of 54 Mbps.

802.11a was the first WiFi standard to introduce OFDM (orthogonal frequency division multiplexing) technology. OFDM is a multi-user technology, which allows multiple devices (like mobiles, tablets, laptops, etc) to be connected to a single wireless router. OFDM chops wireless channels into several partial channels so that multiple devices can concurrently communicate on a wireless network. Both 802.11a and 802.11b have nearly become obsolete, and most new routers come with WiFi standards covered in the next sections.

802.11n represented a substantial improvement over preceding WiFi standards. Not only did it boost the speed to 300 Mbps, but also comes with dual WiFi band support, i.e., it supports both 2.4 GHz and 5 GHz. In fact, for 5 GHz, the maximum speed shoots up to 600 Mpbs!

802.11n also introduced MIMO (multi-input multi-output), a multi-user technology to complement existing OFDM. Now, OFDM splits the wireless channel into smaller partial chunks, but MIMO, on the other hand, enables the transmission of wireless signals through multiple channels, rather than just one. To understand MIMO, simply think of a single- vs. multi-lane highway. Earlier WiFi standards were like a single-lane highway; whereas 802.11n is like a multi-lane highway transmitting wireless data through multiple paths using MIMO technology. 802.11n uses four channels for wireless communication with the channel width of each channel being 40 Mhz.

802.11ac introduced a new technology called beamforming. Now, when you consider a typical WiFi router, it emits wireless radio signals in every direction. However, what if you could aim your WiFi specifically at the device on which you’re working? Well, that’s exactly what beamforming does. Using specialized hardware and algorithms, it detects the approximate location of the connected device and tries to fire the wireless signal in the direction of the receiving device, which results in better signal reception.

The newest generation of WiFi is 802.11ax, or WiFi 6, which was launched recently. Remember that WiFi Alliance told manufacturers to use the “WiFi x” convention henceforth? Although the speed improvements aren’t drastic, as compared to WiFi 5, WiFi 6 still offers blazing fast 9.6 Gbps speed. 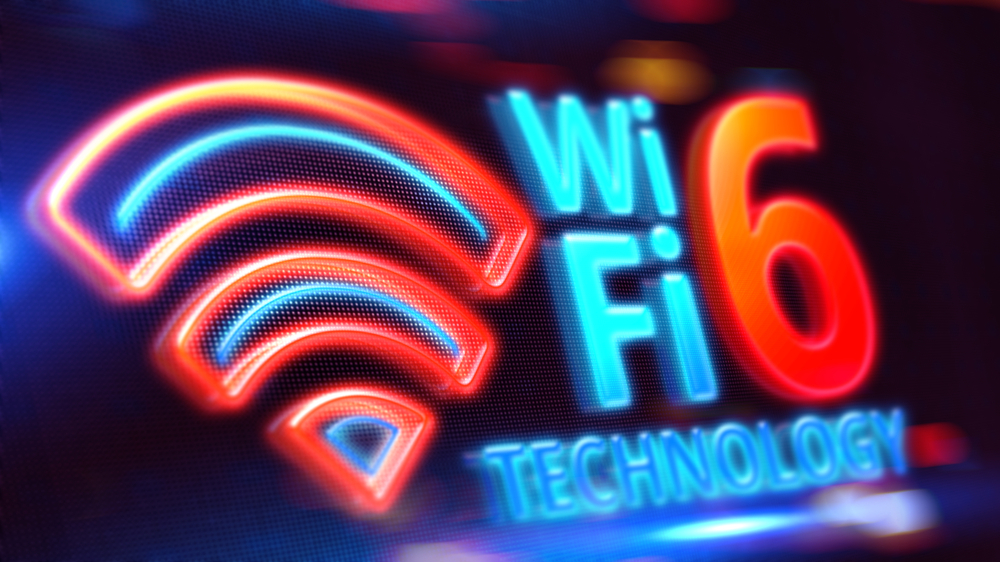 WiFi6 will be a major upgrade in WiFi standards scheduled to be released this year (Photo Credit : AnuStudio/Shutterstock)

Following in the footsteps of 802.11n, WiFi 6 supports dual frequency bands: 2.4 GHz and 5 GHz. In fact, there will be another WiFi standard called WiFi 6e, which will work on a new 6 GHz frequency.

You could say that WiFi 6 is to WiFi what 5G is to mobile networks.

As we can all see, with technologies like the Internet-of-things (IoT), 5G, and WiFi 6, we are entering a new era of a connected world where devices that outnumber humans will be able to communicate with breathtaking speeds. What a time to be alive!