Do you know how to cook? And no, making two-minute noodles doesn’t count! I’m talking about the skill of mixing a plethora of ingredients together and cooking them up to concoct a delicious meal! As human beings, we need to eat to survive, and with the modern-day convenience of packaged foods at grocery stores, as well as sprawling restaurants and eateries, we often don’t really need to know how to cook in order to keep ourselves fed.

When growing up, you might not even tinker with cooking until you leave home for college or start an independent career. One of the appliances that would ease your needs of cooking at that stage is a pressure cooker. The pressure cooker is a modern kitchen appliance that can cook almost any type of food in no time at all. As a result, it also saves a great deal of fuel. The best part about them is that the nutritional constituents of the food are not destroyed. For those of you who have ever eaten a meal made in one of these devices, have you ever wondered exactly how a pressure cooker helps in cooking, particularly so fast? Boiling of Water and its Relationship with the Pressure

Water is the essential cooking liquid that must be used inside a pressure cooker. You need to apply energy in the form of heat to boil water. Upon receiving this heat energy, the bonds holding the water molecules together begin to break. When the internal vapor pressure equals the pressure exerted on it by the atmosphere, the water will start to boil and turn into vapor. When this begins to happen, bubbles begin to form and the water boils.

We know that every liquid boils after reaching a certain temperature, called the “boiling point” of the liquid. You would have learned in school that in case of water, this point is 100o Celsius. It has been observed from scientific experiments that, with an increase of pressure, the boiling point of the liquid also increases. Similarly, a reduction in the pressure lowers the boiling point.

Cooking on Mountain – an Uphill Task

Although the boiling point of water being 100oC is correct, this only holds true if you are at sea level. As you go up in altitude, the pressure starts decreasing. So, if you reach the mountainous regions of Colorado, for example, your school teacher’s lesson of 100oC as the boiling point of water becomes false! As I mentioned before, the reduction in pressure will lead to a reduction in boiling point, meaning that it will take longer to cook in a high-altitude area.

Some of you might be thinking that reducing the boiling point of water reduces the time of cooking, but that’s not the case. For cooking to happen, water mixed with the food to be cooked must be heated for a particular time at a given temperature (preferably higher). Now, the higher the boiling point of water, the more heat the food could absorb, resulting in a faster rate of cooking. That’s exactly how a pressure cooker works. They force the water in the cooker to boil at a higher temperature by increasing the internal pressure and helping us cook delectable meals much more quickly!

Construction and Function of a Pressure Cooker

Now that you understand the basics of boiling and its relation with pressure, let’s take a closer look at the internal structure and function of a pressure cooker. A pressure cooker is essentially a vessel of stainless steel or aluminum alloy. It has a lid fitted with a safety valve at the top to prevent the internal pressure from becoming greater than the vessel can bear. A rubber ring is fixed at the junction of the vessel, which prevents the steam from leaking out. A heatproof handle is attached to the pressure cooker for handling the vessel safely.

How Food is Cooked in a Pressure Cooker

Why Does My Cooker Whistle?

A pressure cooker is a useful domestic appliance, especially for those who like to cook his/her own food, but may not have as much free time as they would like. However, it’s essential to take some precautions when using it, one of which is paying heed to the hissing/whistling sound of the cooker. If there is no hissing or whistling after the cooker has been on the stove for some time, the valve should be slightly shaken to ensure that the hole is not obstructed in some way. 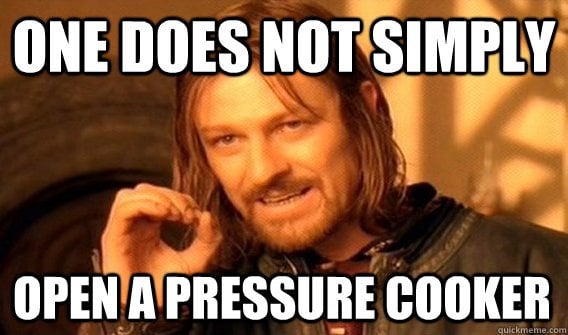 Additionally, users should be extra cautious when opening the cooker. The valve should be slightly lifted with the help of tongs before opening the lid and allowing the steam to escape.