Dark mode saves energy on OLED displays, but not LCD-LED displays. LCD-LED displays require a backlight that shines at a constant intensity, and to darken a spot, an electric current manipulates the crystals so that light gets blocked. This requires energy. On the other hand, OLED displays implement dark mode by simply turning the specific OLED(s) off, which saves electricity.

While working late at night on a project, imagine the lights went out and your PC battery was already dying. Your deadline approached, so there was no question of postponing the work. You reasoned that reducing the display brightness and enabling power-saving mode might just stretch the battery long enough to finish your work. You also decided to turn on dark mode, thinking that your OLED screen may draw even less power by doing so.

However, did dark mode really extend your battery life? What would have happened if the screen was LCD or LED, but not OLED?

Your display is responsible for drawing more than half of the battery power when turned on. (Photo Credit : Street7studio/Shutterstock)

To answer this question, let’s briefly review the working mechanism of different displays, as dark mode’s energy-saving properties depend on the type of display being used.

Liquid Crystal Displays (LCDs) consist of a multi-layer assembly. The first is the backlight, which is responsible for providing illumination to the display screen. It consists of an array of Cold Cathode Fluorescent Tubes (CCFLs) that shine at a constant intensity when powered on. The next layers comprise a polarizer and a crystalline liquid. The polarizer and the crystalline liquid are sandwiched by electrodes on either side. The amount of light passing through the polarizer and crystal layer can be controlled by applying a voltage to the electrodes. The crystals re-orient themselves according to the electric field and some light is polarized. Varying voltage levels change crystal orientation, which changes the light polarization, which subsequently changes the amount of light passing through the polarizers onto the display screen.

Light Emitting Diode (LED) displays have only a single variation from LCDs, namely the backlight. Instead of having CCFLs, the backlight consists of multiple LEDs for each pixel (generally three LEDs per pixel, one red, one green, and one blue). These LEDs are controlled by a complex circuit that allows selective coloration and illumination of each pixel. The brightness is controlled by liquid crystals and polarizers in the same fashion as in LCDs. 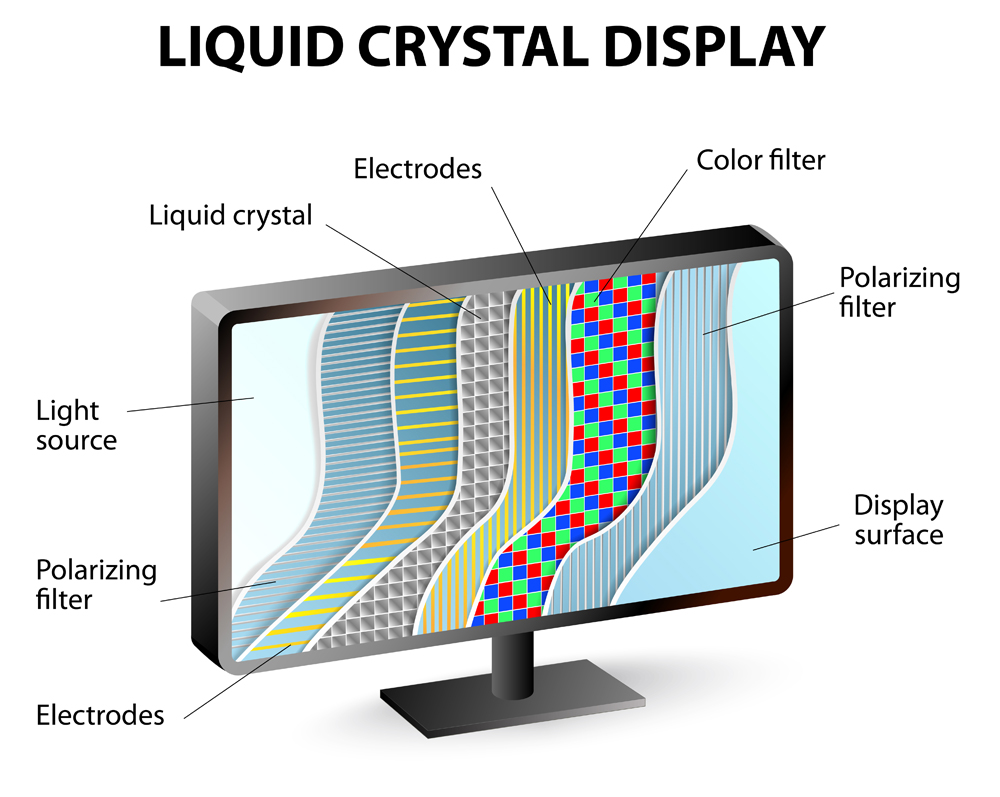 LED-LCD panel breakdown by layers. In LCDs, the light source, i.e., the backlight, consists of fluorescent lamps; in LEDs, it consists of an array of LEDs. (Photo Credit : Designua/Shutterstock)

Organic Light Emitting Diode (OLED) displays are the latest that technology has to offer. Unlike LCD/LED displays, where the pixels require a backlight, OLED displays use an organic compound semiconductor that emits visible light when an electric current is passed through. These OLEDs are so small that individual pixels can be illuminated directly, which eliminates the need for a backlight and an LCD panel. 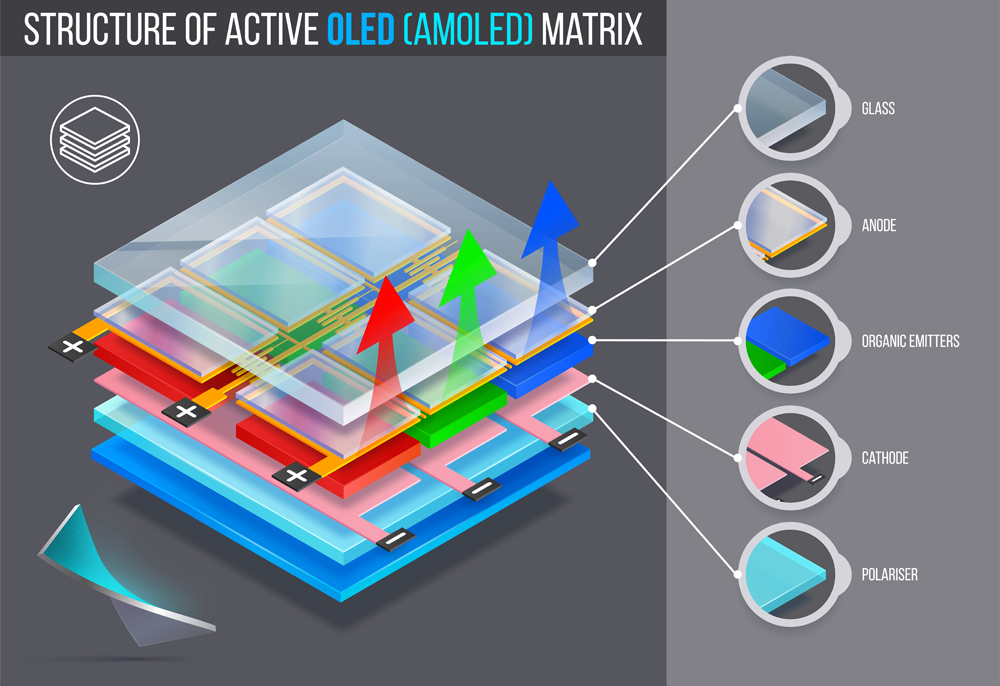 Also Read: What Is OLED And How Does It Work?

Dark Mode works differently on different displays. LCD-LED displays use a backlight that shines at a constant intensity. To darken a spot, an electric current manipulates the crystals so that light gets blocked.  This requires energy. On the other hand, OLED displays implement dark mode by simply turning the specific OLED(s) off, which saves electricity. It is evident that dark mode on OLED screens saves electricity, but that’s not necessarily true for LCD-LED displays.

Energy reduction in OLED displays in dark mode depends on the display brightness and application User Interface (UI). Display brightness depends on the intensity of illuminated pixels. Intensity is defined as the amount of energy falling normally (i.e., light falling perpendicular to the surface) per unit surface area per unit time. The greater the intensity, the greater the energy and the greater the power draw. Since an application UI cannot be changed by the user, screen brightness is the relevant variable for dark mode.

In this study, the energy difference between light and dark modes was measured for different screen intensities, and is summarized in the following tables. 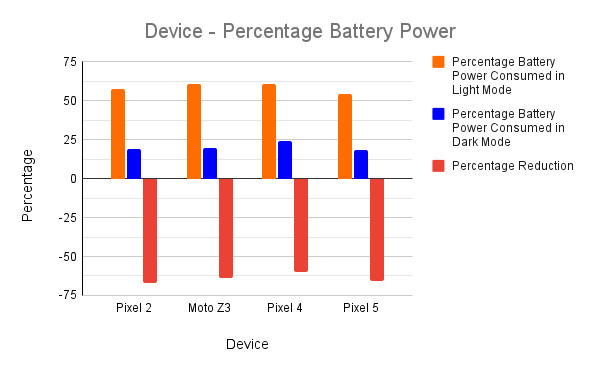 Power consumed by different devices in light and dark modes. 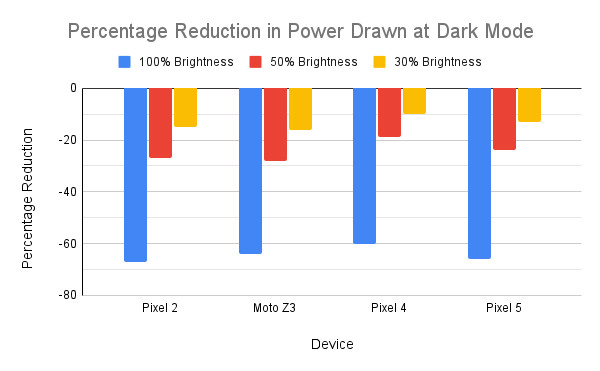 Also Read: What’s The Difference Between LCD And LED?

Thus, it is clear that dark mode does save energy, but only on OLED devices. This is because the construction of OLED displays is such that dark mode does not require energy to block light by manipulating crystals, as is the case in LCD-LED displays. Instead, the individual pixels can be turned off, generating spots that are sufficiently dark and lighting only the required pixels.

In other words, you did the right thing by turning on the dark mode to finish that project before your battery ran out! 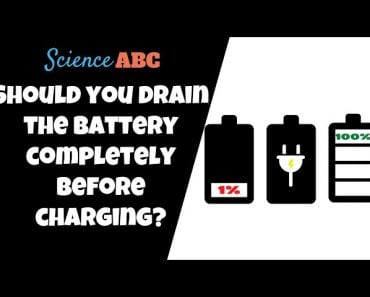