If you’ve ever loved an action/sci-fi movie so much that you couldn’t stop yourself from checking out its ‘behind-the-scenes’ videos, then you have probably noticed a rather unusual thing about the movie sets: a lot of green! With the exception of the actors and a few props scattered around them, the entire background seems to be draped in sheets of green (or blue).

The filming of the movie 300: Rise of an Empire using a lot of ‘greens’ (Photo Credit : moviez.su)

Do you know the reason why movie makers insist on covering their sets with this highly unusual hue of green while shooting a film? 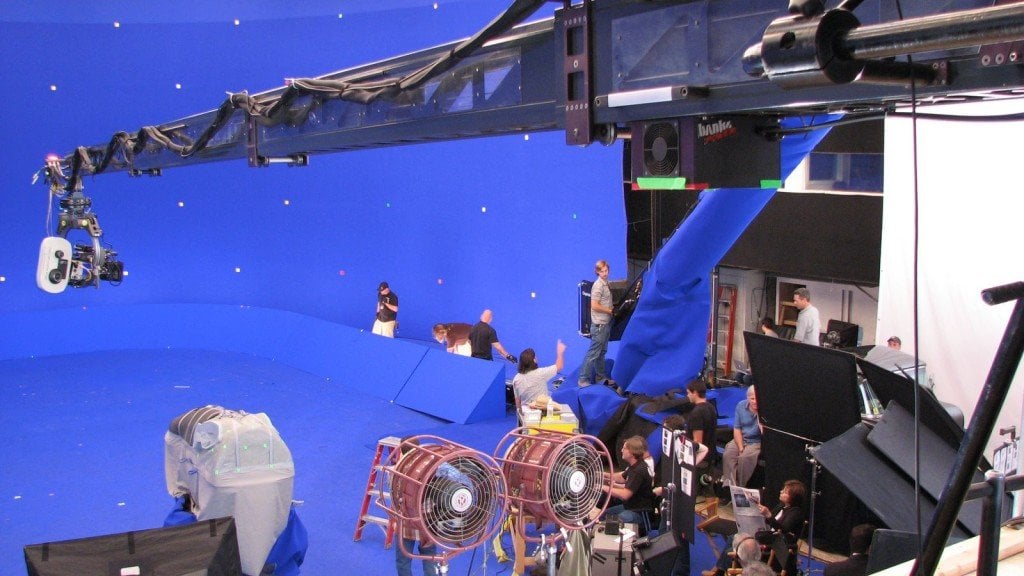 Draped in blue: Blue is another widely used color during the filming of action/animation movies (Image Source: Wikipedia.org)

Since you’re most likely to see the use of green or blue screens in action, fantasy or sci-fi movies – or during weather forecast reports – it doesn’t take a rocket scientist to figure out that the green screen must have something to do with the one element that is common in all of these different media – visual effects and animation.

While shooting videos that involve a lot of visual editing, you need to consider a few things, namely things that will facilitate editing in the later stages of post production – during the shooting itself. For instance, let’s assume that you want to shoot an action scene from a superhero movie. More specifically, you want to show the actors running through ruins and constantly evading aerial attacks. You can’t actually recreate the scene in the real world, since you can’t make actors dart through actual bomb strikes (unless you want to spend millions of dollars on every take and likely end up in prison), but at the same time, you want to make the scene look as authentic as possible. 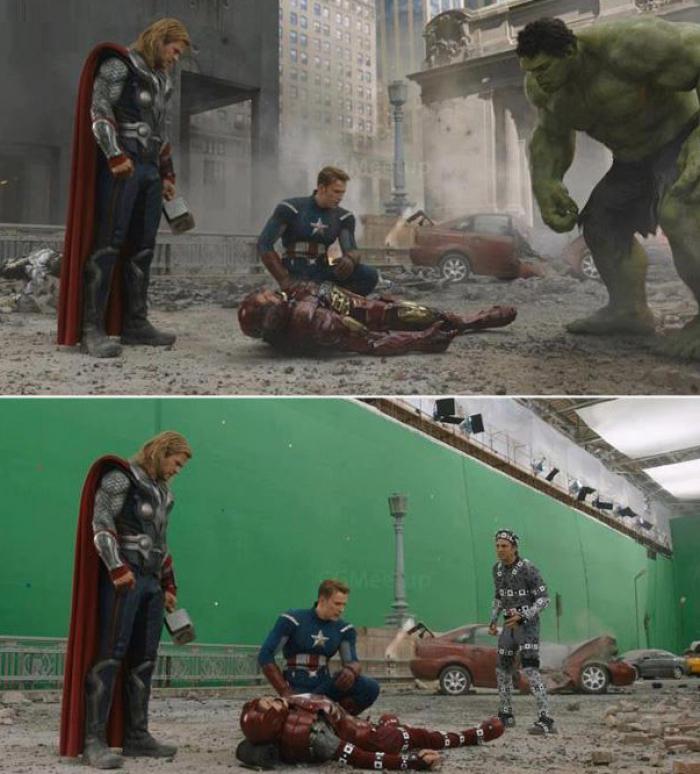 A still from the shoot of the movie Avengers: notice how chroma key helps to place an entirely different background in the footage (Photo Credit : tyramisu.fr)

So, what you need to do is strategically place a few broken objects (e.g., damaged automobiles, rocks etc.) around the actors and install a big green screen behind them, in place of all the elements that you want to capture in the video (including the actors and props). After you’ve shot the video in this manner, the green in the background can then be replaced by any image or video during post-production to simulate a ruinous environment or aerial explosions using a technique called Chroma Key.

Chroma Key is a visual effects technique widely used during post-production to superimpose images and videos on top of an image/video stream based on color hues. Also known as color keying, it makes a selected color range in the foreground ‘transparent’, which subsequently allows for the insertion of a separately filmed piece of footage or image in the selected area.

Since the rise of popularity of animation in movies and TV, this technique has become a goldmine for digital graphic experts and designers in the motion picture, newscasting and video game industries. Although it can be used in a number of ways depending on the graphical requirements, it’s primarily used for editing out (removing) the real background and replacing it with another image/footage (typically a digitally-enhanced one).

For example, during a weather report telecast, the host stands in the foreground with an almost featureless background and a big green screen at the back while filming the report. However, during post-production, the green background is edited out to include maps, shapes and various animations.

Why do they specifically use green? 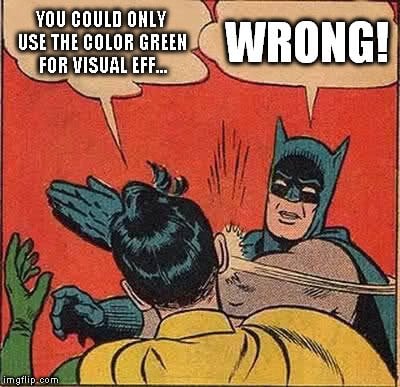 There’s no hard and fast rule, either technologically or ethically, about using a particularly colored screen when you want to apply Chroma Key. You can use any color, such as yellow, purple, red, or pink, to use this feature. There’s no obligation to use the color green.

That being said, why is green the most commonly used color in videos and movies involving a lot of visual effects?

There are a few reasons behind this. The most basic one is the fact that green ‘stands out’ reasonably well while filming any footage. Consider this: if anything in the foreground has the same hue as the color you want to key out (in this case, green), then it will be keyed out too. For example, if the subject is wearing a green badge on his body, then that portion would be keyed out while editing, making it look like as if there’s a hole in his body. This is why you want to choose a screen with a color that has very little chance of matching anything in the foreground. 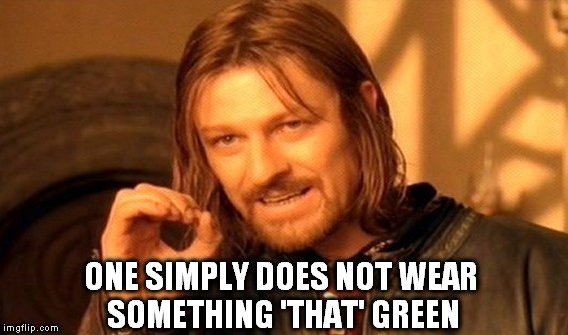 Since there’s no green in a human’s skin tone or clothing, it offers a better contrast between the subject and the background and can therefore be keyed out easily, without affecting the other elements of the picture.

Another reason that green is used is because it has the highest luminance among all the color channels (RGB), which makes green screens very bright (because of their high luminance). However, it can also cause the problem of ‘green spill’ if the lighting and the subject’s distance from the screen is optimized before shooting. 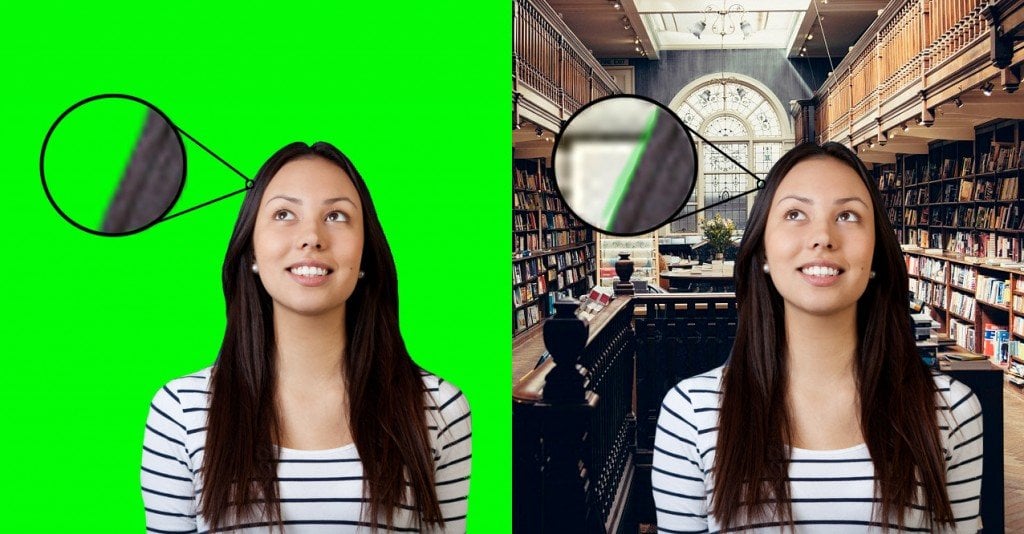 The side-effect of green spill: notice the green reflection on the subject’s hair in the enhanced image

Most digital cameras today are based on CMOS sensors, which consist of a Bayer Pattern filter on the top for producing images. This filter produces twice as green information as it does for red and blue. This means that editors have more information to work with during post-production, which in turn produces finer pictures.

The use and popularity of green screens touches almost every domain related to virtual media, ranging from educational fields to anything that requires a more immersive and captivating form of information broadcasting. It goes without saying that if it weren’t for those giant green screens, heroes like Iron Man and Spiderman wouldn’t have looked nearly as cool!