When was the last time you wrote something down on paper? And I’m not talking about vigorous scribbling on the back of a notebook to make sure your pen is working, but meaningful prose, such as a diary entry after a long tiring day. Or well, a dull phone number.

The ubiquity of typing or the infrequent use of writing in modern culture has troubled many writers in recent years. However, it isn’t difficult to realize that the computer is just another addition to our long list of tools, perhaps the finest and the quickest, when it comes to jotting things down, from patterning manuscripts with the help of nails to typing with a standard ball pen. So why is it so frowned upon?

Why do we write?

The evolution of writing, from using conical clay tokens, pictography, and finally the alphabet, illustrates the development of information processing to deal with larger amounts of data in greater abstraction. Writing is the principle technology for collecting, manipulating, storing and retrieving data. No one will deny that there’s something gratifying about the feel of an old book with the pages severely battered by hard-pressed writing. These marks exhibit the visual and tactile record of your work and the involved creative stages. It reminds us that writing is a craft.

The uneasiness regarding typing is justified because the transition is cultural. Notable writers of the 20th century, such as Virginia Woolf and Albert Einstein, were known to fill diaries with their personal expressions. For some people, the act of writing, expressing how you feel and what you are going through, is indeed therapeutic when emotionally troubled. Many authors still prefer to write their drafts in notebooks and transfer the finished work over to a computer. However, not everyone aspires to be a novelist. The act of writing is often romanticized by its practitioners, but what writing bestows us with visually, typing does temporally. The debate concerns something that is extremely central to every human on the planet and its degree is a major indicator of intelligence: learning.

Why is Writing better than Typing?

Making notes is an integral preliminary activity when writing a book or essay, or when learning a subject. Taking notes on paper is actually much more complicated than we perceive it to be. It requires the brain to rephrase information, which in turn is a process of summarizing and comprehending the information first.

The splendid coordination between our motor organs, visual system and, most importantly, our creative centers allow us to flirt with ideas while simultaneously laying them down. Moreover, the arrows, loops and asterisked notes you leave on the bottom are individually esoteric — only you understand them. 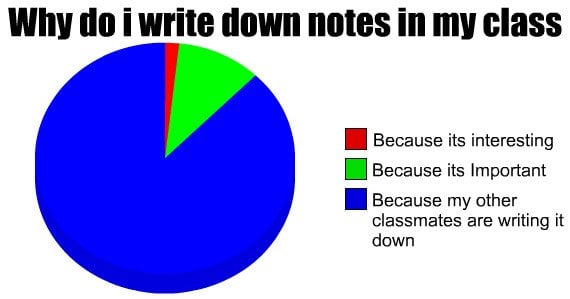 Results suggest that taking notes longhand not only leads to high-quality learning, but also acts as a superior strategy for storing new information for later examination. On the other hand, laptop notes are usually verbatim ones, signaling mindless transcription.

There’s an apparent consensus that taking notes in writing serves us better than typing them on a laptop. Software constraints deny you the graphic freedom to draw arrows and branch two concepts. The creative liberty offered by the page-and-pencil method is far greater than the graphic applications on your PC.

Writing even on a small scrap of paper is a more self-conscious process, and more likely to inspire further elaborations and revisions. According to Judy Willis, neurologist and teaching consultant, “Writing is, by nature, an opportunity for creativity and personal expression. When writing is incorporated in learning and assessment, there is increased opportunity to produce the ideal situation for active, attentive learning because students value creative problem solving or creative production.” Unless you write like a doctor, to some degree, tracing characters since childhood has wired our brain to recognize them even when haphazardly written. Patients who encounter reading difficulties after suffering from a stroke tend to recall letters better when asked to trace them regularly. Drawing each letter by hand enhances our grasp of a letter’s contours and structure — gesture restores the memory.

While writing is implemented by directing the movement of a pen with thought, typing diminishes this hassle altogether. This is why children tend to learn typing faster than writing. Sure, typing isn’t as mentally taxing as writing, and laptop notes can be churned out much faster. But, students who take the easy route can often become cognitively lazy — there is something about typing that leads to mindless processing. But is this completely true?

Why is Typing better than Writing?

A counter argument was featured in an editorial published on September 4 in the Los Angeles Times: “States and schools shouldn’t cling to cursive based on the romantic idea that it’s a tradition, an art form or a basic skill whose disappearance would be a cultural tragedy. Of course, everyone needs to be able to write without computers, but longhand printing generally works fine. Print is clearer and easier to read than script. For many, it’s easier to write and just about as fast.” When I take notes in class.

To make the case for typing, consider a 1999 study, involving 35 Australian 13-year-olds, conducted by educational scholar Carol Christensen to highlight the benefits of instructive typing. The 35 children were known to have “low levels of proficiency in typing”, ranking in the bottom 15% of their school for words per minute. They were split into two groups — one group was asked to spend 20 minutes of each day on instructive typing for 8 weeks. The other group was asked to type without any instruction.

The quality of every child’s writing was measured before and after the experiment. Interestingly, children participating in instructive writing scored higher on quality tests. On a scale up to 25, prose produced by them hit a median score of 17.18, as compared to 12.15 for the others. Another study by Michael Russel showed that students who type fast tend to write better content and develop concepts more comprehensively. The experiment divided a group of 8th graders into two groups. The groups were asked to write essays in two 45-minute chunks. One group was asked to produce them longhand and the other was allowed to use a keyboard.

Written notes undoubtedly seem to be more mentally stimulating when we consider the prospect of absorbing knowledge, but when it comes to producing it, typing may have the edge. Specifically, fast typing.

It seems that the pace of ideas can outrun the pace of laying them down. As long as people convert their thoughts to prose fast and fluidly enough, regardless of their tools, they’ll do reasonably well. 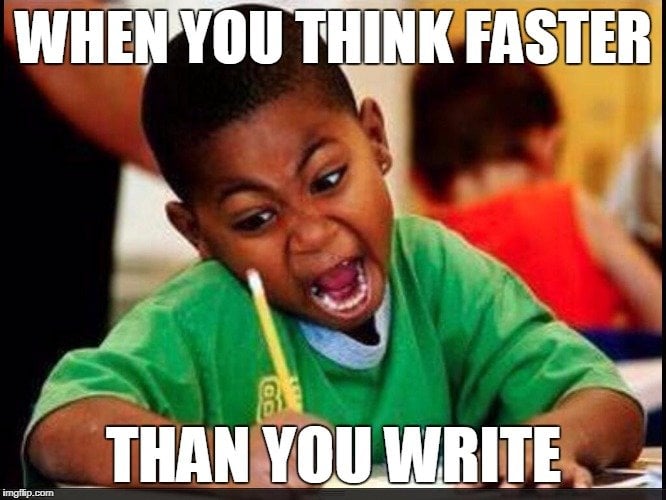 Now, with the introduction of touch screens and the dominance of the smartphone, keyboards might not be far away from being dismissed. Perhaps we’ll see the rise of holographic or laser keyboards, a cultural transition like the one from typewriters, making the remnants of the previous generation even more uneasy.

However interactive, adapting to touch screens still seems to take some time, but this is not a problem for children. The plasticity of a child’s brain and, unlike an adult, an abundance of brain cells not specifically dedicated to previously learned tasks allows children to wrap their heads around new tasks swiftly.

The question is, will we still express and learn better than we do with a pen?