Voice and sound are produced by the larynx when the muscles of the voice box vibrate. This is done by pushing air through the slit between the muscle. Different sounds are produced by controlling the size and width of this slit. Since the muscles are highly contracted while crying (due to the activation of our fight-or-flight response), your voice ends up sounding odd and inconsistent.

Talking while crying is difficult. You have likely felt a lump form in your throat that muddles your coherent words, you’re taking sharp breaths, and your voice sounds squeaky and high-pitched. The closed-up throat seems to be even worse when you’re trying to avoid crying.

As if the waterworks were not humiliating enough… losing your voice seems like the perfect cherry on this mortifying cake. Crying is one of the most wholesome human experiences (Photo Credit : Wikimedia Commons)

What Happens To Your Body When You Cry?

Crying is the result of emotional distress in humans. In fact, humans are the only animals that show emotion by shedding tears. Scientists believe that non-verbal form of communication developed as humans became social beings.

The fight-or-flight response changes your body to be able to handle the “danger”, in this case, an emotional threat. The muscles tighten and become ready to work at a moment’s notice. Blood circulation to the muscles improves and our heart rate goes up. To supply the body with more oxygen, the muscles in the trachea contract so that the wind pipe can increase in diameter. What Is The “Lump” In Your Throat?

The voice box is situated in the air pipe, so any changes in the trachea or the muscles around it affect the voice box too. The voice box gets constricted and the increased flow of air passing through it prevents it from working properly. This is also accompanied by a sensation of having a lump in one’s throat, which is known as the “globus sensation”.

However, since there is no physical threat, the body gets confused. The parasympathetic nervous system tries to kick in along with the sympathetic nervous system to try and relax the muscles. Also, when the person tries to swallow while crying, the widened glottis tries to close up. During normal swallowing, the epiglottis covers the glottis, which allows the saliva/food to enter the esophagus, or the food pipe.

Also Read: How Does Crying Affect Our Body?

While crying, swallowing exerts pressure on the widened glottis. Since it cannot relax, the glottis starts aching, so swallowing becomes even more difficult. This causes the feeling of having something stuck in your food pipe, leading to the sensation of a “lump” in your throat. Effect On The Vocal Cords While Crying

The autonomic nervous system has neurons connected to the smooth muscles of the body. This includes the glottis, epiglottis, and other muscles of the throat. 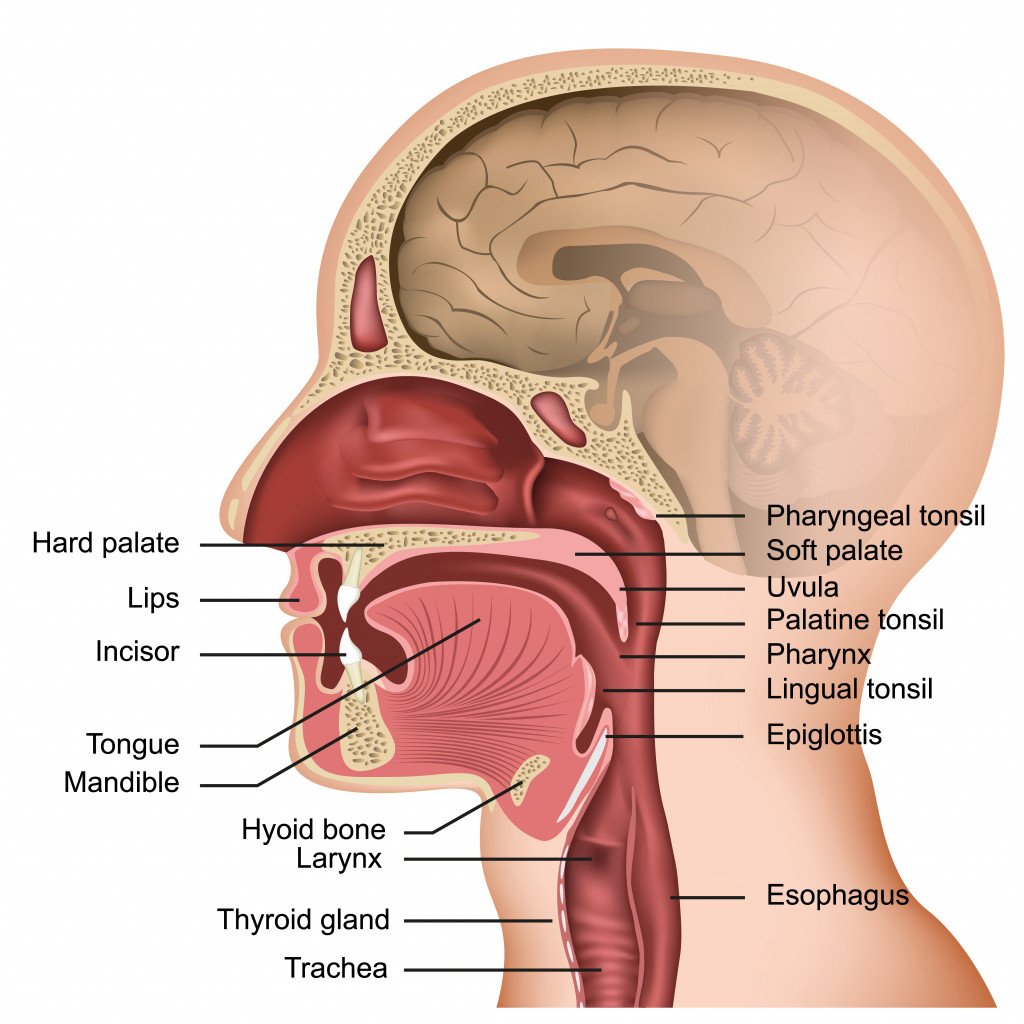 A depiction of the oral cavity showing the larynx and trachea (Photo Credit : medicalstocks/Shutterstock)

Since the muscles are highly contracted while crying, your voice ends up sounding odd when you try to use it.

Additionally, while crying, a greater amount of air is exchanged with every breath. This means that the air flowing through the larynx is also greater in volume. Losing control over the air flow makes it even more difficult to speak. All of this directly leads to changes in a person’s voice, making them feel like they are unable to speak normally.

The feeling of a lump in your throat goes away when you’ve calmed down. As the globus sensation disappears, the voice also returns to normal.

Everyone has experienced the closing of their throat and a raspy/nasally voice while crying their eyes out. Is that not the most frustrating part of weeping? You have probably wondered why your voice had to betray you during such emotional times. Well, there is a valid scientific explanation for this phenomenon.

Crying due to any kind of emotional distress causes the body to think that you are in physical danger, so it activates your “fight or flight” response. This results in the widening of the airway to take in as much air—and oxygen—as possible. However, this comes with a major downside. The widened airway makes swallowing very difficult. If the glottis is widened, your food pipe is not easily accessible for swallowing. Forced swallowing makes the muscles in your throat even less relaxed, all of which affects the voice box.

Since the vocal cords are not relaxed, it becomes quite difficult to speak, which is why the voice changes while crying. When the emotional distress is alleviated and SNS is no longer stimulated, the muscles relax, so your voice goes back to normal.

Arushi holds a graduate degree in Biomedical Sciences from the University of Delhi. Ever since she was a kid, Arushi has loved books and reading has been an escapist experience for her. It was only natural that her love for books further manifested itself as a flair for writing and poetry. However, her one true love in life is Biology and she can never tire of the marvel that is the human body. When not studying or working, you can find her writing poetry, going on runs and watching the sunset!