As the voicebox grows and the vocal chords expand to resonate more, the voice drops nearly an octave. However, a number of factors, including differential growth speeds and cognitive adjustment, don’t let the voice catch up with its new abilities, and the voice cracks.

As if there aren’t enough embarrassing moments in those delicate years of puberty, boys are often subject to one very obvious sign that their bodies are changing – the dreaded voice crack. It only happens for an instant, but there is no mistaking when it happens. It is one of the great social equalizers for males as they go through puberty, but why does it happen in the first place? And why does it only seem to happen to boys? 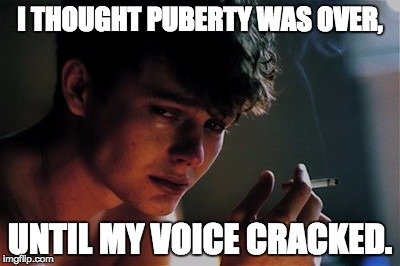 Short Answer: As the voicebox grows and the vocal chords expand to resonate more, the voice drops nearly an octave. However, a number of factors, including differential growth speeds and cognitive adjustment, don’t let the voice catch up with its new abilities, and the voice cracks.

The Pains Of Puberty

When girls and boys grow up, typically in the ages between 9 and 16, a huge amount of changes occur in the body. They often experience a rapid growth spurt, facial hair may begin to grow in boys, and secondary secondary characteristics begin to appear. This massive spurt of hormones into the body can be very confusing, and for young people, these changes can be frightening. However, these changes are completely normal, and while it can result in a few years of awkward school photos, unwanted pimples and raging libidos, it isn’t going to kill you.

These changes in the body result in growth in many different forms, from height and broadness of the shoulders to smaller details, like the muscles and organs inside your body, which you might not even realize. Puberty affects boys and girls in some of the same ways, but also in a number of different ones. Technically speaking, the process of puberty begins the same way; your brain sends out a hormone called gonadotropin-releasing hormone (GnRH). This starts a cascade of hormones from the pituitary gland, namely of luteinizing hormone and follicle-stimulating hormone. These specialized hormones are in both sexes, but they affect different parts of the body; men and women don’t have hair in all the same places, do they?

These hormones go to work on turning teenagers into adults with elevated hormone levels that they’ll likely have for the next 30-40 years. Facial bones grow, sexual organs develop and menstruation begins, among many other dramatic changes. One of the most obvious affects of these hormones – besides occasionally growing 6 inches in 9 months – is the cracking of a boys’ voice. Embarrassing? At times. Completely normal? Definitely.

When people talk about a cracking voice, they rarely think of a girl, and this is because the change in girls’ voices is much less pronounced, dropping only a few notes from childhood squeak to adult tone. In boys, however, the change can be an octave or more, which is very hard to overlook. So, while this does affect girls, the more pronounced (and potentially embarrassing) cracks happen to young boys.

Also Read: Why Does Your Voice Change When You Cry? 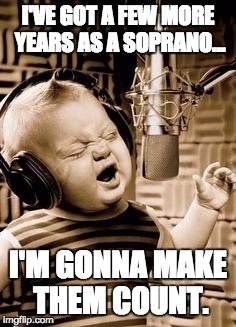 The science behind this truly shows the intricacy and beauty of the human body. As mentioned, countless parts of the body begin to grow when puberty strikes, and this includes the voice box, also known as the larynx. First of all, everything begins with the air in your lungs. When you choose to make a sound (speech, singing, etc.), you channel that air into your trachea, forced upwards by your diaphragm. Upon exiting the trachea, the air must pass through a small hole, which has your vocal chords on either side. This is your voice box, and muscles attached to it are extremely sensitive. When they are tensed or relaxed, they cause the vocal chords to vibrate, releasing bursts of air in the form of sound.

A higher tension on the vocal chords causes a higher frequency to be created, while less tension results in a lower frequency. When children are young, their vocal cords haven’t fully developed, meaning that they are thin and rather restricted, resulting in a higher frequency, like the strings on a piano.The higher the pitch, the thinner and more tightly pulled the string.

As boys experience the onset of hormones during puberty, like testosterone, the cartilage and muscle in their throats begins to expand, resulting in longer, thicker vocal cords that can emit lower frequencies. With a larger voice box, the vocal folds are able to truly resonate in the space, allowing a boy who used to be an alto drop down to a bass in a single year. As mentioned above, the facial bones and the sinus cavities also increase in size, allowing for deeper pitches in the male voice.

However, none of this explains the cracking…

The changes during puberty come faster than at any other time of life, except perhaps our very first years as an infant. With so many things altering in the body, there can be growth differentials between vocal folds and larynx cartilage, and a slight delay in the mind reacting to these new changes. It isn’t always possible for young boys to control their vocal folds or newly strengthened muscles, and the voice “cracks” back to its old pitch – or even higher!

Boys’ vocal folds grow almost two times faster than girls going through puberty, and when puberty ends, their vocal folds are 1.5x longer than those of the fairer sex. With such rapid growth, it’s no wonder that the mind can’t always get things straight! This period of cracking can occur for a few months, or last for years, as a result of the body and mind not perfectly matching up during the transition from youth to adulthood.

You might get teased a bit for the unexpected cracks, but they usually only last for an instant, and everyone experiences it at some time or another. At the end of the day, it’s a sign of maturing, albeit not the most graceful signal of growing up to those around you!