We like crunchy food because it is an indication that the food is fresh. The actual action of chewing crunchy food and the sound it makes is shown to be satisfying, like a form of catharsis. Studies have shown that stressed individuals prefer crunchy/salty foods as comfort food.

These are all words we might use to describe the loud experience of eating Cheetos or even a particularly fresh apple. Take a bite of either, or maybe shards of toffee or tempered chocolate, and you’ll get that familiar bronkch chomp sound, followed by the delightful taste as liquids and saliva pleasantly flow over your tongue. This crunch is what makes toast superior to plain bread. It also makes the Pop Rocks that burst like nano-sized firecrackers on your tongue a veritable party in your mouth.

The list of foods that are too noisy to eat on a Zoom call with your microphone on is quite long. However, we’ll go on chomping them down no matter what; that is how much humans love the crunch.

However, eat one chip too many, or angle your caramelized sugar the wrong way on your tongue, and you’ll soon find small scratches inside your mouth and on your tongue. Truly crunchy foods can hurt, as sharp edges can lacerate the soft tissues of the cheeks, gums and tongue.

Despite this, why do we love crunchy, crispy, and crackling food? Why are we willing to put ourselves through potentially inconvenient pain just to hear ourselves eat? 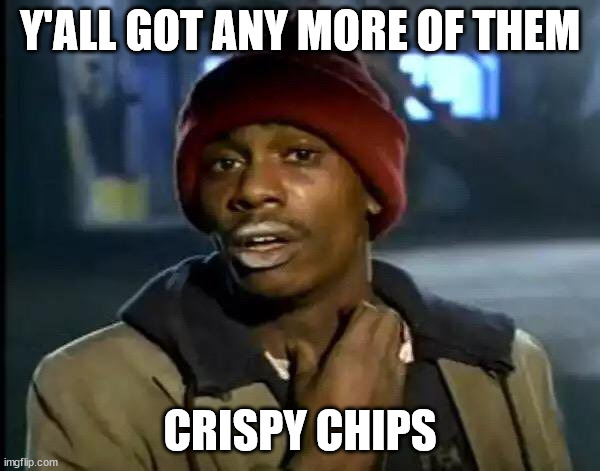 Or for that matter, what is crispy and crackling?

For something as simple as crunch and crispy, food scientists haven’t agreed on a standard definition. However, research shows that at the heart of crunchy, crispy, or crackling food is the loud, indescribable sound certain it makes. It’s not just any sound… it is the sound caused when food breaks.

For the wet crisp or simply the crispness of fruits and vegetables, the sound comes from your teeth breaking the cells or the cell walls of the fruit or veggie.

Imagine a single cell of your favorite crispy fruit, let’s say a crispy apple. Now, think of that apple cell as though it’s made of glass and filled with water.

Side note: Pease don’t actually eat glass, even if it apple-shaped, and even if it is as small as a biological cell. This is purely a thought experiment to prove a point.

You’ve taken a bite, and that single apple cell is about to be chewed on by your teeth. As your teeth chomp down, the glass cell will offer some resistance to your teeth, which your teeth will overcome by adding a little more force. Eventually, the glass will compress beyond its holding capacity and suddenly, with a magnificent release of force, it will shatter. That release and the subsequent shatter can be felt with a loud sound. 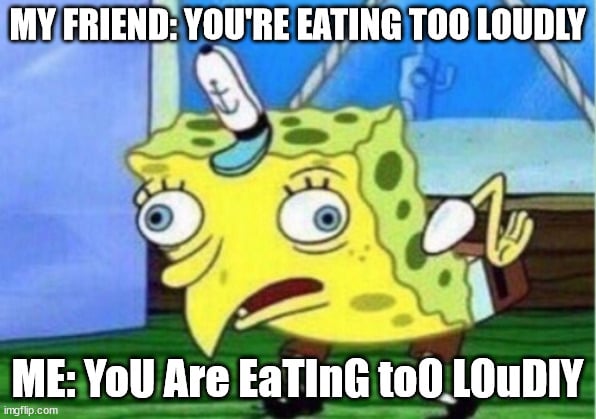 On the microscopic scale, cells with tough cell walls behave like glass filled with water (which is why they’re often called wet crisp, if you hadn’t already figured that out).

You might not hear a single cell breaking, but combine hundreds of thousands simultaneous cell walls breaking, and the shatter manifests as a delicious crispness.

The same thing is true with crisp chips (or crisps). Instead of water within cells, it has tiny pockets filled with air surrounded by hardened structures (starch, protein). When the surrounding structure snaps between your teeth and the air releases, you get your crunch.

Besides linguistic and literary differences, these two are scientifically different.

A pioneer in auditory food sciences, Zata Vickers, in one of her reviews, noted that crispness is defined by a high-pitched release sound, while crunchiness lies in the lower pitch ranges.

For scientists, this is an important distinction. An apple is crisp, while an almond is crunchy, and Pop Rocks “crackle” or “pop” on your tongue.

However, for us mere mortals (and even for many other gastronomy researchers), the two terms are interchangeable. 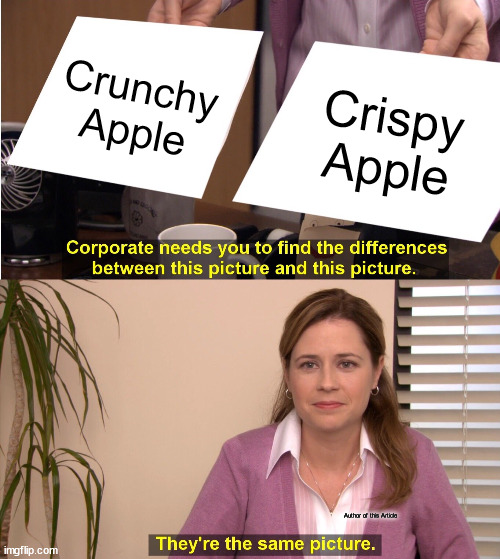 There might be a difference, but it isn’t too large.

Along with taste and smell, the sound of food also indicates whether it’s good to eat or not. A salad with crisp lettuce is far superior to one with limp and soggy leaves.

This is of obvious evolutionary importance. Decaying food has already fed bacteria and fungi, causing the cells to leak out their water or become flaccid, like a deflated balloon. That mushy, soft feeling is an indicator of spoilage.

You could argue that smell, taste and feel are enough, but that’s not how evolution works. Over time, an organism—human ancestors, in our case—associates all the different changes in taste, smell, texture, color and sound with decay.

Extend this to a corn puff, and the same thing applies. A soggy corn puff is as bad as drinking cold milk tea. Water moistens and softens the corn puff’s firm structures, essentially making it an unappetizing sponge.

The first bite of crispy toast or a chip is satisfying. The loud sound of fracturing air pockets gives our brains a strange pleasure, even if it causes us harm.

Think about it, chips, especially broken ones, have many sharp edges. Chip shards tossing and turning in your mouth could easily scratch the soft tissue of your mouth. Until saliva softens the chip, you’re at the chip’s mercy (saliva has painkillers though, which is why one doesn’t feel too much pain in our mouths from small scratches). Even with this vulnerability, it has rarely stopped anyone from chomping on crisps whenever they can.

This is similar to humans’ love for spicy foods. It clearly causes us pain and discomfort, but we also derive masochistic pleasure from tormenting our tongues with Carolina Rippers and the Trinidad Moruga Scorpian. The crisp/crunch situation is a calmer, gentler version of humanity’s love for chili heat.

It might also have to do with the fact that adding force to break our food is cathartic.

A 2009 study found that adults gravitate towards sweet and salty/crunchy food when stressed. We’ve all experienced the catharsis of releasing pent-up energy; eating crunchy food might be another form of that. Similarly, a 2006 study checked food preferences of stressed university faculty, and observed similar preferences.

With this said, we don’t know the neurologically significant mechanisms that underline this pleasure we get from loud food, but it’s impossible to deny!

Why does crunchiness matter?

For starters, chefs can give you the perfect eating experience. The flavor of food isn’t only about taste and smell; texture, mouth-feel and sound are all a part of it. Hearing bacon sizzling is part of the pleasure of eating it. The same goes with crunchiness. Research has found that when participants can’t hear the crunch of a ‘crunchy’ food, they rate it as less pleasurable.

Molecular gastronomy can perfect the temperature and pressure while cooking to give you a chip with the optimal crunch, or the crispiest toast you’ve ever had.

And if you can’t pay a couple thousand dollars for a Michelin star restaurant, commercial snack food has your back. Snack food companies can similarly use the power of science to mass produce perfectly crunchy and crispy chips.

And let’s be real, we really only care about the quality of our Cheetos!