The brain stores highly emotional memories longer than neutral memories. Negative memories are remembered longer because those memories are corresponded with high stress situations. From an evolutionary standpoint, it is important to remember a highly stressful situation in order to avoid it if it arises in the future.

Ever wondered how your memories of the past affect you? Especially the negative ones? Imagine that you’re sitting calmly, and out of nowhere, you remember that one time you failed in your presentation and your peace of mind is shattered.

You can feel your palms getting sweaty, your heartbeat increasing and your gut doing backflips, and then you think to yourself, “Here we go again.”

If you think this happens only to you, well, that is absolutely not true. Dwelling on old negative thoughts happens to everyone! 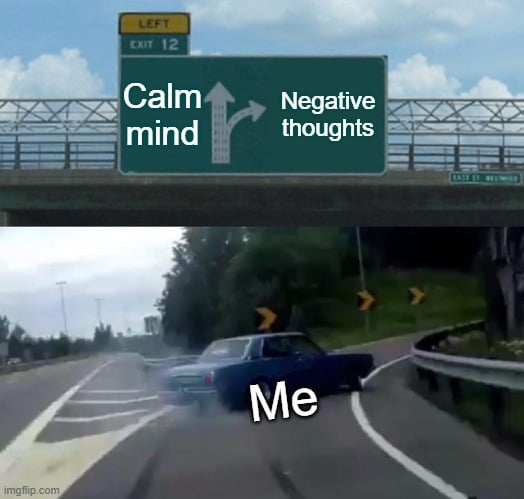 The mind slipping into the realm of negative thoughts

Researchers have long been keen to understand the scientific basis behind our negative thoughts. In 2006, researchers Elizabeth Kensinger from Boston University and Daniel Schacter from Harvard University published their renowned paper on ‘Emotional memory recollection‘. The experiment focused on the memory of the 2004 American League Championship series of baseball where the Boston Red Sox defeated the New York Yankees, chosen because it is considered a highly emotionally charged event. The study consisted of 3 categories. The highly positive (Red sox fans), the highly negative (Yankees fans), and the neutral group (participants who weren’t fans of either team). The results showed that the fans of the teams for whom their team winning or losing would be a highly emotional experience remembered the event better than neutral spectators. These results show that emotional memory was recalled better than nonemotional memory. Not only this, but it was seen that the negative group, fans of the losing Yankees, remembered more in-depth detail of the event than the positive group, the Red Sox fans. This proved that negative memories are more vividly remembered and are less likely to undergo memory distortion, unlike positive memories. Another similar experiment was conducted in 2007, which studied another emotionally charged event, the fall of the Berlin Wall. The participants were divided into groups based on what they felt about the event—those that saw the event as positive and those that saw it as negative. The results indicated that the highly negative group recalled the event with more factual accuracy than the positive group. Further research involving memory analysis revealed that emotional memory is remembered far more accurately than non-emotional memory. This implies that it is important and useful for us to remember emotional experiences.

How The Brain Stores Memories

To understand why emotional experiences are better remembered by the brain, let’s look at how the brain stores memory.

The chief structure in the brain responsible for memory is the hippocampus. It is a small structure found in the temporal lobe that seems to be crucial for our long-term memories (among its many other functions). However, the recollection of emotional memory not only requires the hippocampus, but also the amygdala and regions of the prefrontal cortex.

The amygdala is a small almond-shaped structure in the brain that is primarily involved in controlling emotions, especially those of fear and aggression. When an emotional experience is recalled, the emotional aspect of the event is contributed by the amygdala. The more emotional a memory, the greater the activation of the amygdala.

Several other regions of the prefrontal cortex involved in emotion and social behavior are also seen to inform our emotional memories. Many of these structures are associated with the limbic system, our more “primitive feeling” part of the brain.

Scientists believe that the involvement of the amygdala and the prefrontal cortex during emotional memory recollection helps in memory retrieval.

Activation of the amygdala and the prefrontal cortex because of an emotion causes these activated neurons to send impulses to the hippocampus. A large number of impulses sent to the hippocampus is seen to aid and reinforce the memory. However, the definitive underlying pathway of emotional memory recollection is yet to be fully understood. This why you vividly remember getting an ‘A’ or an ‘F’ on a test and just as easily forget whether you had switched the fan off after leaving the room.

However emotional a memory is, it does not beat the pronounced effect that a ‘negative’ memory creates. One might wonder how these negative memories have such a great impact on us, but the explanation is quite clear.

Studies show that rats remember the place in an experimental setup where it received a shock. fMRI scans of participants having to identify emotional experiences showed an increase in activity of the hippocampus, amygdala, and various regions of the prefrontal cortex when participants recollected negative events.

Negative events tend to be stressful and cause our body to release the stress hormones epinephrine and cortisol. PET and fMRI studies showed that the action of stress hormones on the amygdala was crucial for controlling and strengthening memory.

Epinephrine and cortisol are thought to act on the basolateral amygdala (BLA), which is responsible for storing fear-conditioned responses.

Since these hormones are released under negative circumstances, it leads to the better remembrance of negative events. The amygdala is strongly activated and sends strong emotion-oriented signals to the hippocampus. The overall effect is the pronounced recollection of the negative incident both in terms of memory and emotion. The baffling thought is why does our body work towards strengthening negative memories? Why remember something that gives one grief and stress?

Scientists believe that this tendency has evolutionary importance. The sole purpose of recollecting negative incidents is for us to remember, recognize, and beware of such threats in the future.

This makes sense, considering that prehistoric humans were more likely to encounter life-threatening danger on a regular basis. Negative recollection aided survival. Remembering the time a tiger attacked from behind the trees could mean preventing a similar mistake the next time.

But today, there are no tigers waiting for us behind trees. Our definition of negative events has changed in accordance with our lifestyle. A negative grade on a test, a failed presentation, or a traumatic incident, such as a mugging, are some such negative instances that we are likely to face.

A person who was once mugged is most likely to remember details like the gun, the thief’s car, the street at which the incident took place, and so on. One might even remember how faint they felt or how their vision turned blurry in the midst of the stressful situation. From that point onwards, every little thing, like the car model or the street, might remind the person of that awful incident. Nature’s reason for making us remember is for us to learn and beware or be better prepared for such situations in the future. Evolution demands that we learn from the past

The degree of recollection of a negative incident might vary from person to person. While one individual might vividly recall every detail of the mugging incident, another might be able to remember nothing more than the gun. The amount of stress hormones released and the mnemonic creating patterns for memory formation differs in everyone.

However, this does not imply that humans only recall negative experiences well. The joyous days of our lives and particularly precious memories are also stored in our hippocampus. Our emotional memories are seemingly immune to easy memory distortion.

The haunting effect of a negative memory has come down to us as a gift of evolution. Although it seems more like a bane than a boon, a slight change in perspective is all it takes. Evolution doesn’t want the negative thoughts to ring in our heads in order to take away today’s peace, but rather to teach us a lesson from the encounter with yesterday’s beasts!