The main reason we cannot remember being a baby or toddler is because the hippocampus, the part of the brain responsible for forming memories, is not fully developed. This is due to the rapid production of new neurons in childhood, which disrupts existing networks of memories and makes them inaccessible.

It’s easy to recall certain notable events of the past—birthdays, anniversaries, convocations, or visits to Grandma’s house—but do you remember those events when you were a baby? Probably not.

If you’re a curious mortal like us at ScienceABC, you have likely pondered why you can’t remember being a baby or recollect important events that happened when you were a toddler. The answers to these musings have been researched and are linked to our memory systems, especially in the way our memory system develops as we grow from a baby to a child and into early adulthood. What is Infantile Amnesia?

Can you recollect your first birthday? Or perhaps your second? Humans rarely remember events from before the ages of 2-3 and have a very erratic recollection of the events that happened in the ages between four and seven. Interestingly, there is a scientific name for this phenomenon: infantile amnesia.

So why is it almost impossible to have any recollection of being a toddler? Is it simply because our first, second or third birthdays happened a long time ago, and our memories have naturally faded with time? Not necessarily. In fact, you’ll mostly observe that even a 50-year-old adult will have a decent enough memory of his adolescence, which happened more than 30 years ago! However, a 17-year-old teen, on the other hand, is unlikely to remember something that occurred in his infant years when he/she was one or two, even though the events happened only 15-16 years ago. Babies Do Have a ‘Memory’, But It Comes With an Expiration Date

It was long believed that the reason we can’t remember much of our infanthood is because, as young toddlers, we are simply incapable of forming any memories of such events. However, many researchers have concluded that infants can and do form memories, including both implicit and explicit memories.

For the uninitiated, implicit memories are procedural memories that make it possible to accomplish basic tasks without ‘explicitly’ needing to think. For example, remembering how to walk is an implicit memory. Explicit memories, on the other hand, require a conscious effort from us to recollect, such as recollecting a specific dance move taught by a teacher.

In her research, renowned psychologist Patricia Bauer found that our ability to recollect things for long periods of time progressively improves throughout childhood. As a part of her research, young toddlers were taught to imitate an action to test their recollection capabilities. It was observed that a six-month-old baby could remember what to do for 24 hours (but not beyond 48 hours), whereas a nine-month-old baby could remember what to do typically for a month (but not beyond 3 months). By the age of two, infants could remember how to do a task that they were taught even a year earlier. 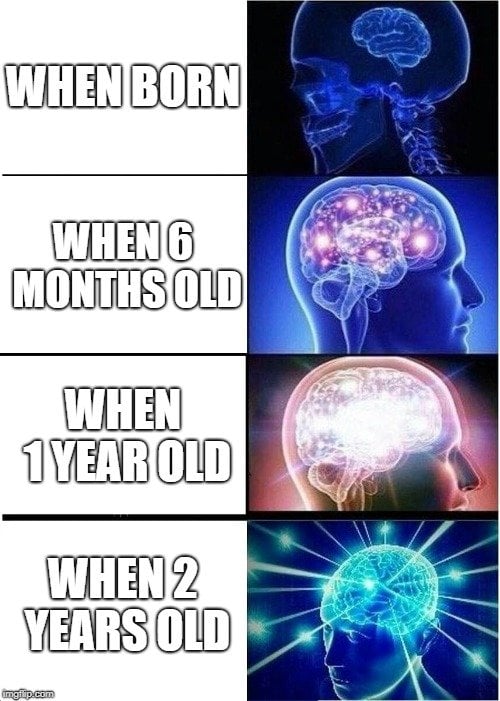 When a new baby is born, its brain is only one-quarter the size of an adult brain. By the time that baby turns two, the brain has become three-quarters of the size of an adult brain. This change in size stimulates the growth of neurons and also prunes some connections. So, you may be wondering, does the development of the brain in infancy have to do with our failure to recollect our early childhood memories?

To understand that, we’ll need to know a bit about the hippocampus—the part of the brain that plays a decisive role in forming episodic memories, i.e., memories of events that happened to us. While several parts of the brain continue developing after we are born, the hippocampus is one of only a few regions that keeps producing new neurons into adulthood. When we’re very young, the dentate gyrus—an important part of the hippocampus—is in overdrive, prolifically producing neurons. These newly generated neurons are integrated into hippocampal circuits. Although the production of new neurons continues into adulthood, the rate of generation is significantly reduced as we age. Scientists believe that this rapid rate of neuron production in childhood is the reason behind the higher rate of forgetting when we’re infants. When these new neurons are integrated into hippocampal circuits to form new connections, the masses of these neuron disrupt existing networks of already-formed memories, resulting in the fading away of our infantile memories.

Recent research by neuroscientists Frankland and Josselyn corroborate that it is the rapid neuron growth during infancy that hampers the brain circuitry where old memories are stored—making them almost inaccessible. As we age past infancy, neurogenesis slows down, and the hippocampus attains a better balance of memory formation and retention. Although we still forget quite a bit, that’s completely natural. Frankland opines that most things we do in life are pretty mundane to discern from each other, like sleeping or walking. He wisely concludes that the concept of healthy adult memory function lies not only in remembering things, but also in clearing out inconsequential memories!