Some people have more than five fingers on each hand, a condition called polydactyly. Some people think this condition is lucky, because it is linked to gods with six fingers. Some research has shown that an extra finger can provide advantages to individuals, like better coordination. Polydactyly is not limited to humans – aye-aye lemurs and giant pandas also have an extra thumb. The brain of individuals with an extra finger has a specific dedicated region that controls the activity of the extra finger.

1 in roughly 500-1,000 children have more than five fingers on each hand. This condition, called polydactyly, has been at the center of several superstitions.

One of the ancient myths in South America concerns the Ugha Mongulala tribe of the Amazon jungle, often considered as people “chosen by the Gods”. It was said that gods with 6 fingers used to visit them, linking the scenario of having 6 fingers to divinity.

While for most of us today, polydactyly is nothing but a rare trait, recent research has shown that a completely developed and functional sixth finger can provide several advantages to individuals. 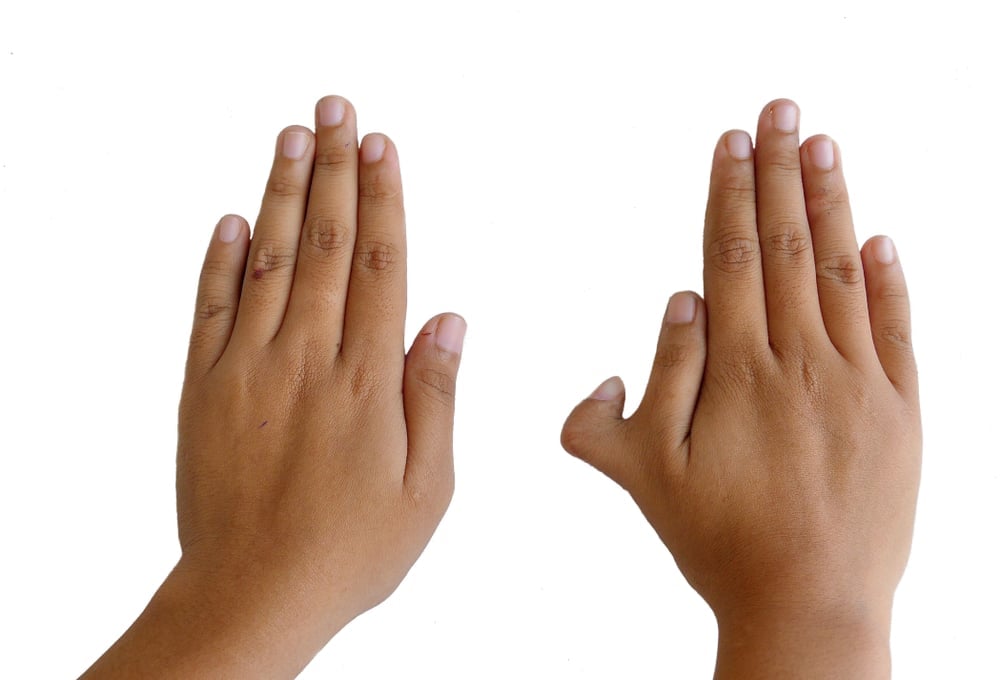 In medical terms, the phenomenon of having 6 fingers is known as polydactyly and was coined in 1670 by Theodore Kerckring. “Poly” means many and “dactylos” means digits or fingers, and the extra finger is referred to as a “supernumerary digit”.

There are three main types of polydactyly.

If an individual has two thumbs, they are said to have “radial polydactyly“, as “radius” is the name of the bone that supports the thumb side of our hand. It is also called “preaxial polydactyly”, as the extra finger is nearer to the first finger (thumb).

If an individual has two little fingers, they are said to have “ulnar polydactyly“, as “ulna” is the name of the bone that supports the little finger side of the hand. This condition is also called “postaxial polydactyly”, as the extra finger is nearer to the last finger (little finger).

If a person’s extra finger is a copy of any of the three other fingers, they are said to have “central polydactyly“. 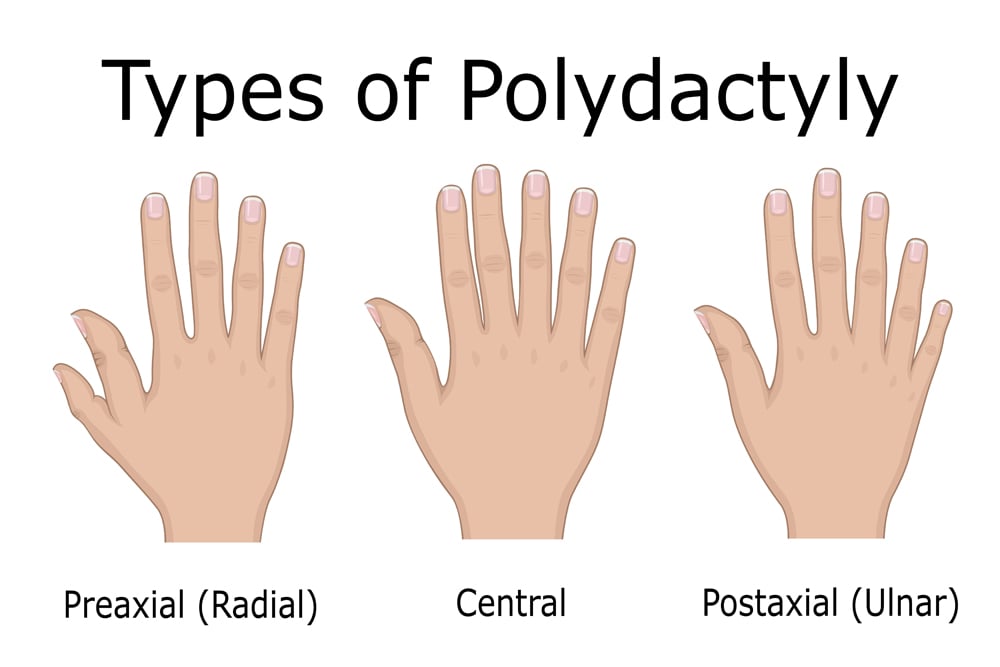 Polydactyly is characterized by the presence of 6 fingers on the hands. The diagram above depicts the different types of polydactyly, preaxial (radial), central, and postaxial (ulnar). (Photo Credit : Scio21/Shutterstock)

What causes 6 fingers in hand?

Extra digits can occur sporadically in nature, and may be caused by environmental factors such as nutrient intake level, exposure to hazardous chemicals before pregnancy, and a history of epilepsy.

Hereditary genetics is also a cause of polydactyly. A group of genes called the homeobox or Hox genes determines the body plan of the embryo, namely where the head and tail should grow. They ensure that structures grow in their intended locations in the body.

Research has found that certain hox genes are a cause of genetic polydactyly.

Early tetrapods had more than 5 fingers on their hands. The evolution of these genes may be responsible for the transition from polydactyl ancestors to 5-fingered (pentadactyl) humans and 4-fingered (tetradactyl) animals.

Can having 6 fingers make you more dexterous?

In 2019, researchers from the University of Freiburg published a paper in which they analyzed two subjects with an additional finger between the thumb and index finger on both hands. The study emphasized which abilities the additional finger can confer to the subjects when performing several tasks.

In most cases of polydactyly, the extra finger is just a lump of tissue without bones, ligaments or tendons, making it unable to move independently. The extra finger can only be functional when it is fully developed, with bones, tendons and ligaments.

If the extra finger lies between the thumb and index finger, it can contribute to improved coordination with the other 5 fingers.

Such subjects had versatile manipulation skills. The extra finger enabled them to complete certain tasks with just one hand that would otherwise require both hands, such as tying their shoelaces, managing mobile phone operations, playing complex video games, and efficient typing.

However, previous research has shown that this only applies to individuals with a fully developed extra finger between the thumb and index finger. 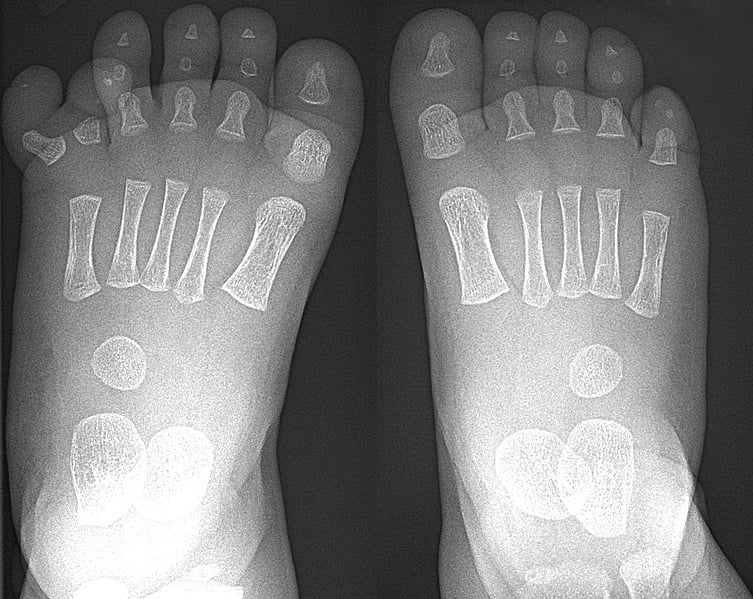 An X-ray image of feet with 6 fingers. In the first image, a fused bone indicates an underdeveloped extra finger, which may not provide dexterity advantages. The second image shows a foot with six fingers, where the sixth finger has independent bones, a complete structure and may therefore confer additional advantages. (Photo Credit : Mikael Häggström/Wikimedia commons)

Is polydactylism observed in animals?

Polydactyly is not limited to humans. Aye-Aye lemurs, a small primate, has an extra thumb (pseudo thumb) with bone and cartilage, which it uses when trying to acquire food. Furthermore, their pseudo-thumb, like human thumbs, can move in three different directions. Giant Pandas also seem to have a pseudo-thumb that helps them get a better grip on bamboo while eating.

The brain and extra fingers

Our brain controls all the movements and processes regulating our body. Does that mean the extra finger will exert pressure on the brain for its smooth functioning?

Our four-limbed ancestors, the tetrapods, had a varied number of fingers and toes, ranging from 5 to 13 on each limb. At the end of the Devonian period, when animals had moved from water to land, almost all creatures had only five digits, though some did have four.

We don’t know the exact reason why we have only 5 fingers instead of six. This could be because, as animals evolve, it is easier to lose a trait than to gain one. That could be the reason why having six fingers is still rare.

There is no solid evidence that the extra finger can be beneficial, except from the study mentioned above. Further research, perhaps with a greater number of participants, may provide better insights into the role of an extra finger in enhanced motor abilities.

For the time being, the limited evidence available suggests that having an extra finger may provide extra skills, provided the finger is fully developed.