Heavy rain, lightning, strong winds and other types of severe weather cause power outages and interruptions by knocking down power lines, blowing objects into overhead lines, flooding power-related equipment, or damaging insulation, among others.

As we become more and more dependent on technology and electricity, the idea of the power going out becomes even more worrying. It’s one thing when the lights flicker for a few seconds in the middle of a storm, but spending hours or days in the dark has the potential to inspire panic and hysteria. In 1977, the power went out in New York City for about 25 hours, resulting in more than 1,000 fires being set and over 1,500 stores being looted.

Some places around the world are more prone to severe weather events than others, but everyone has likely experienced a power outage due to severe weather at some point. The question is, with 21st century technology and the various dangers of power blackouts, why are powerful storms still able to turn the lights out?

For those who don’t know how electricity reaches their homes, a short introduction to the electrical transmission and distribution system will help the rest of this article make more sense. Power is produced in generating stations, which are usually located at a distance from urban centers and use wind, coal, water and natural gas to create the necessary electricity. That electric current is pushed into a transformer, which increases its voltage so it can travel long distances through transmission lines that criss-cross the country. 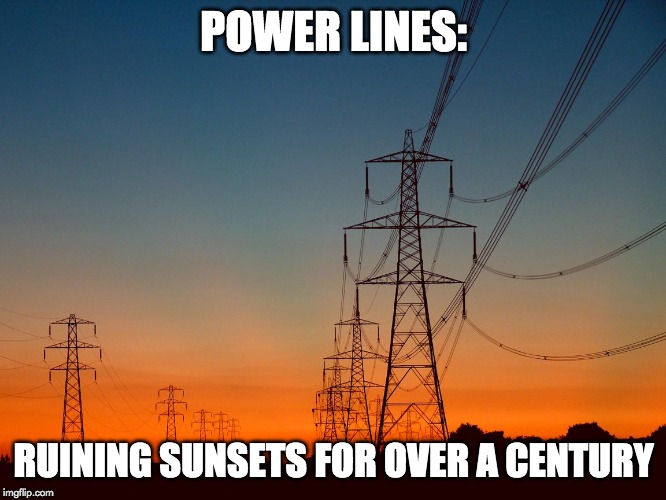 After the electric current completes this long journey, it passes through a substation where the voltage lowers. It can then be distributed onto smaller, local power lines that we regularly see lining suburban streets. It moves through these distribution lines into transformers, which further drops the voltage so it’s safe to enter your home. Finally, the electric current moves through your service panel and is distributed to the wires and wall sockets you need for all your gadgets and chargers!

This is a classic example of an aboveground power line system, which is what most people think of in terms of power outages—downed power lines sparking in the street! However, there is another underground option, which moves electric current in much the same way (in terms of starting and ending points), but some of that journey happens in wires that are buried underground, rather than hanging from poles. There are advantages and disadvantages to both these systems, which will become more clear after we discuss the effects of severe weather on our electrical transmission and distribution system.

When a storm is rolling, it’s always wise to check your candle supply, in case the power is about to go out. However, given the enormous task of moving electric current hundreds or thousands of miles to power millions of homes, it seems strange that something as simple as a rainstorm could cause the system to break down. However, power lines are also designed to protect the power grid and the surrounding area, which may make them seem faultier than they really are. 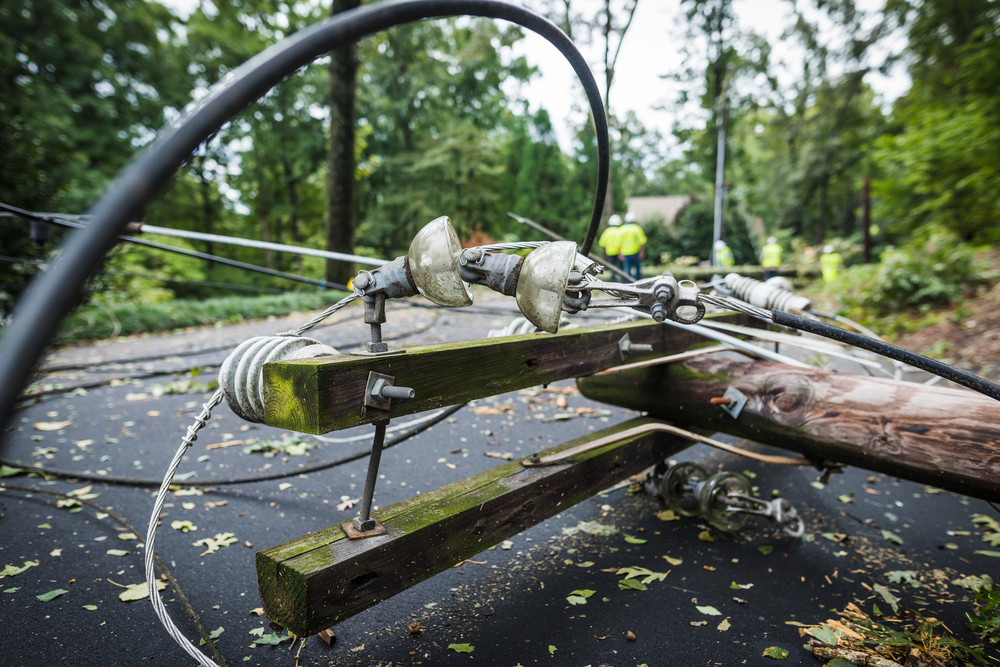 Severe storms can cause trees to sway which in turn would snap high-voltage power lines (Photo Credit : Scott Alan Ritchie/Shutterstock)

For example, most storms bring strong winds along with them, which causes trees to sway and branches to snap. When a tree branch comes in contact with the high-voltage power lines, the power is automatically cut, and then restarted when the contact ends. This is to prevent the electric current from being discharged and wasted. If a branch snaps and falls onto a power line, the power will remain off until the problem can be resolved. In some cases, the wind can be so bad that it will blow power lines down, or an entire tree will fall across the lines, pulling them down. This is why municipal crews spend a lot of time cutting trees back when they begin to encroach on nearby power lines.

Aside from the wind, precipitation is also potentially disastrous for power lines. Heavy and continuous rains can damage the insulation elements (e.g., bushings and switches) and cause a blown fuse and power loss. Physical damage from branches and hail, or gradual wearing down over time, can cause cracks and breaks that let water seep in and do damage. Snow and ice storms are even more hazardous, as these heavier forms of precipitation can stick to and weigh down power lines, sometimes snapping the cables entirely. 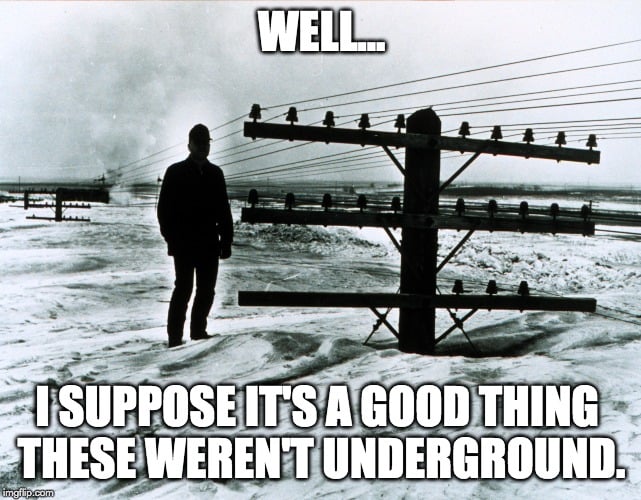 Lightning is also drawn to elevated, metallic things, so power lines are commonly struck by lightning, which can cause a power surge that overloads local transformers and causes major power issues. Trees struck by lightning often collapse onto nearby power lines, causing power outages, even if the trees have been adequately cut back by local workers.

All of these severe weather dangers for traditional aboveground power lines make it seem like the underground option is far safer and more effective. However, there is more to the story than that. Flooding and heavy rains can cause problems in underground power lines too, such as when insulating systems get damaged and water leaks in. Additionally, one of the advantages of aboveground wires is that the problem area is easy to identify and access. If you power grid is underground, it becomes more difficult to find the problem, and more disruptive to the surrounding community to access and fix. 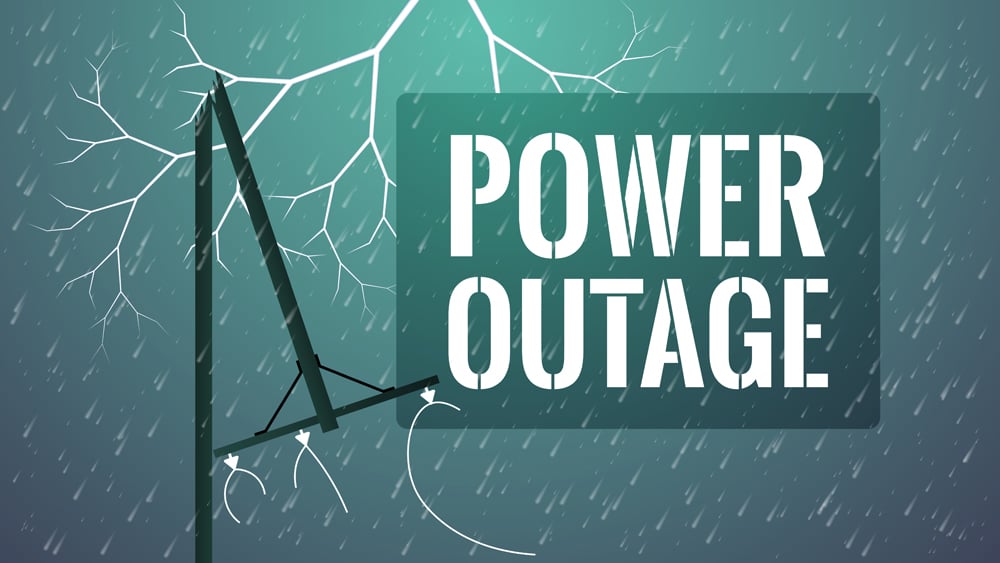 Even with the hassle of repair, many people in hurricane-prone areas would love to have their power lines buried, but the biggest objection from cities and localities is the cost. It is far more expensive to both install, access and repair underground power lines than it is to erect traditional electric poles. Although there are some advantages, the billions of dollars it would cost to implement, in addition to the elevated electric bills for users, make it less popular than you might expect.

Also Read: How Safe Are You Indoors During A Lightning Strike?

The creation, distribution and maintenance of an electric grid that hundreds of thousands of square miles is a daunting and admirable task. However, patience is required when bad weather rolls in, because the electric transmission and distribution system of any country is susceptible to damage, regardless of whether the wires are above the ground or below. While these systems are constantly being improved upon, power outages will probably always be a part of life—and the lifeblood of the candle industry!

How much do you know about storms and electricity?