Home
Eye Openers
Why Does Spraying Deodorant On Socks Make Them Stink Even More?

Although spraying socks with deodorant or perfume reduces the stench of socks temporarily, it does nothing to address the actual source of the stink.

Imagine that you’re in a bit of hurry to go somewhere. You scramble to the shoe rack and briefly marvel at the amazing collection of footwear you have. You pick a fancy pair of sneakers, but suddenly, you realize that you don’t have any socks to put on!

Left without options, you do the abominable thing that most of us have been guilty of at some point in our lives—you pick up a pair of used, unwashed socks. Unfortunately, since they’re unwashed, they obviously stink. You choose to spray them with deodorant, which suppresses the stench, but after a few hours, the funky smell returns—with a vengeance!

But why does that happen? Why do deodorant and perfume make socks stink even more? 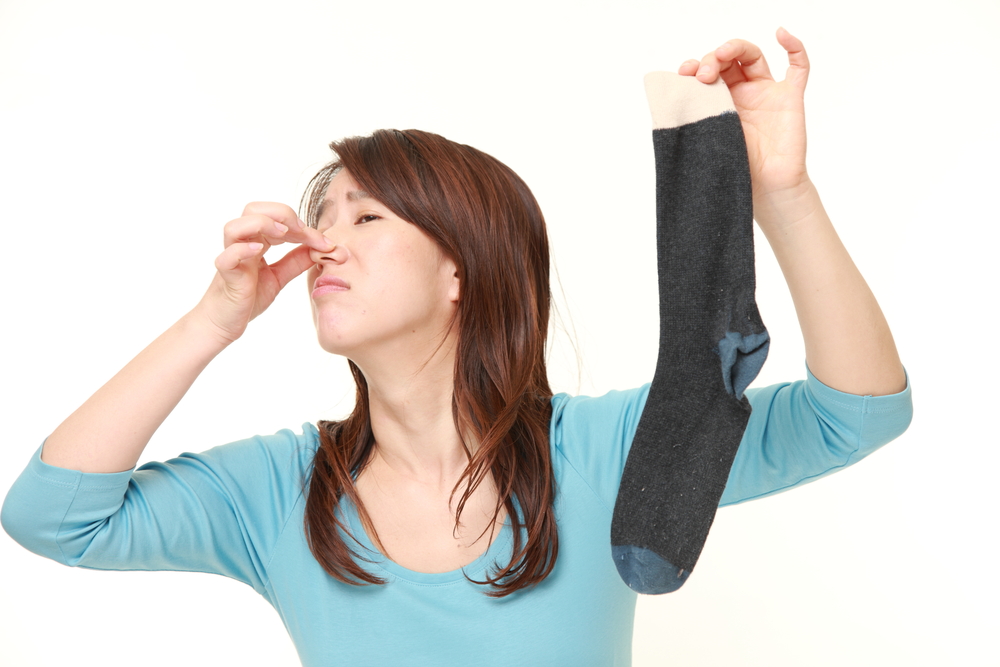 Did this lady spray her socks with perfume? (Photo Credit : UV70/Shutterstock)

Before we discuss that, let’s take a step back and look at the root of the problem.

You may be shocked to learn that the odor of smelly socks remains an object of study and research even today, because it’s rather… intriguing.

The stink from smelly socks comes from an “aromatic” combination of ammonia, fatty acids and lactic acid. To be more specific, these chemicals are released from the action of bacteria that accumulate on our feet.

You see, feet remain confined within footwear and as the wearer moves around, sweat accumulates. This warm, semi-enclosed, and sweaty region becomes a breeding ground for millions of bacteria, which thrive and multiply in such conditions. They feed on the dead skin and sweat (available in ample quantities in used socks) and excrete organic matter, which causes that characteristic stench.

In fact, this is why any part of your body that’s covered and warmer in temperature usually produces a bad smell, as it promotes bacterial growth in that particular region of your body.

By the way, have you ever noticed that dogs stink when they’re wet? What do you think is the reason behind that?

It’s the microorganisms present in their fur. You can read more about that here:  Why Do Dogs Stink When They Are Wet? 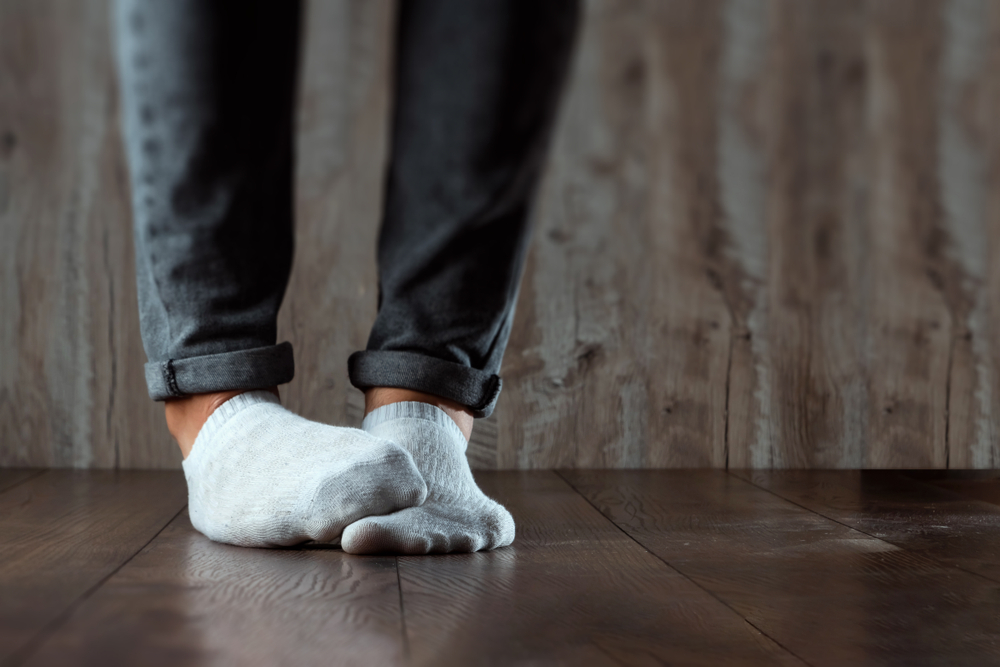 Since wearing cologne or perfume makes a person smell better or ‘sweeter’, it’s only logical to presume that spraying perfume on a particularly smelly pair of socks would eliminate the stench. That presumption is correct, but only for a short period of time, after which the smell comes back—and it’s usually worse.

Spraying deodorant or perfume only temporarily masks the bad smell with its own stronger smell, but it does nothing to address the root cause of the problem—bacteria.

As time passes, the stronger smell of the perfume starts fading away, leaving the source of the bad smell intact and completely unaffected. If the perfume isn’t antibacterial, then the bacteria in the smelly socks feed from it and reproduce even more, all of which worsens the smell.

Alright, now that we have clearly established why spraying smell socks with perfume doesn’t do much good, let’s talk about what you can do to get rid of that foul smell!

How do you get rid of smelly socks’ bad smell?

The problem of smelly socks can be solved through various methods.

You know the best way to get rid of the foul smell of used socks?

As mentioned earlier, used socks usually become breeding grounds for bacteria, as they offer plenty of food for bacteria in the form of water and organic matter. When you wash your socks, you essentially clean and disinfect them, which eliminates bacterial growth.

If you wear socks very frequently, it’s highly advisable to spray your shoes and socks with disinfectant. Although this won’t entirely prevent bacterial growth, it does seem to make socks less smelly.

The wetter your socks are—due to sweat or otherwise—the stinkier they will get. Therefore, try to keep your socks as dry as possible. Also, if they do get wet (due to rain or simply because you like to step in puddles for fun), then take them off your feet and let them dry. 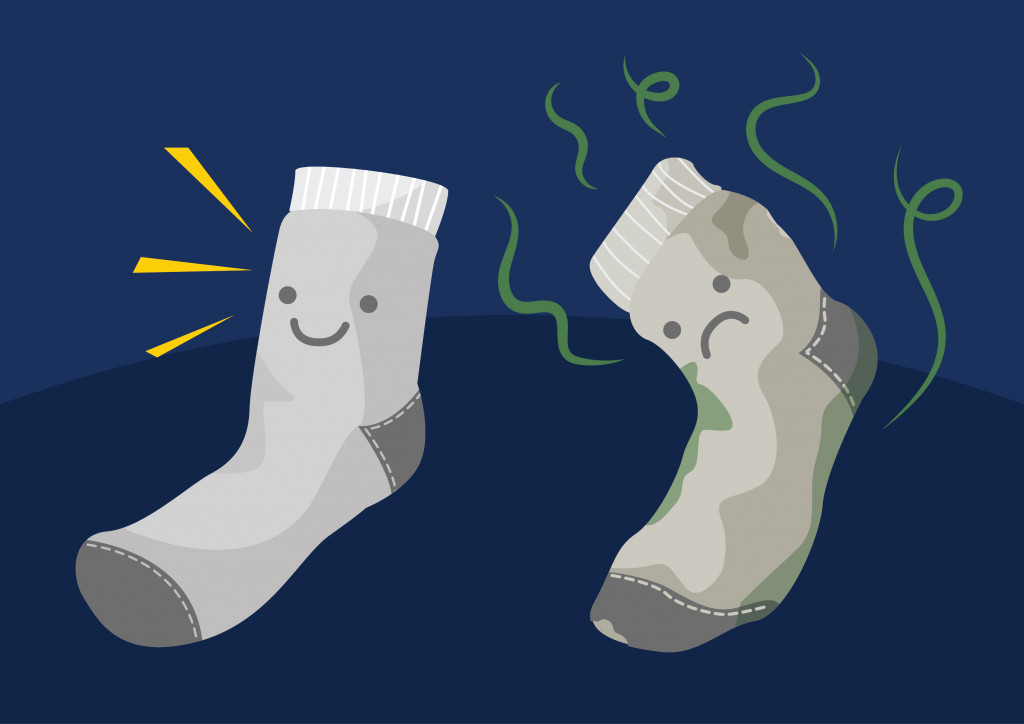 Keep your socks dry – they like it! (Photo Credit : SeaSandwich/Shutterstock)

More often than not, the smelly socks phenomenon is an upshot of smelly feet. So, if you really think about it, it’s smelly feet that is the root cause of the whole problem.

Clean your feet at least once every day, and more often if you wear socks and shoes on a regular basis. Use a mild soap to wash your feet thoroughly. Its a good idea to have two pairs of shoes and alternate wearing them every other day; this way, each pair of shoes gets time to dry out completely before they’re used again.

5 – Freeze ‘em in their tracks

Since the source of that bad smell is bacterial growth in socks, if you can somehow prevent that, then your socks will stop stinking. One popular method is to put the socks in question in a plastic bag or ziplock (the idea is to make it airtight and watertight to keep all moisture out) and then freeze it. This is more of a home remedy or temporary fix for smelly socks, but it works wonders. That being said, this sounds like an extreme step to get rid of the smelly sock smell, when you could literally just wash the socks and solve the problem.

Although smelly socks are a problem that a majority of the world’s population deals with on a daily basis, you wouldn’t believe some of the strange benefits of smelly socks. A rather nifty advantage of smelly socks is that they attract mosquitoes, and since the socks are so good at this, they have actually been used in mosquito control exercises in places where malaria is highly prevalent.

But that isn’t an excuse to torture the people around you with smelly sock stink. The best way to keep socks from stinking is to change them out and clean and wash them regularly. Spraying deodorant on smelly socks might mask the foul smell temporarily, but when it returns, and return it will, it does so with vengeance.

References
The short URL of the present article is: http://sciabc.us/M6WKZ
Help us make this article better
Prev Article Next Article
About the Author