The stinky odor of a wet dog is caused by the microorganisms present in their fur. The microbes release volatile compounds that create this recognizable stink.

Pet parents love nothing more than watching their furry friends splash around in a pool on a blistering summer day. Most dog breeds enjoy spending time in water, whether it’s at the beach or in a nearby puddle. However, there is no denying that the entire experience can be quickly ruined by the awful ‘wet dog’ stench that lingers after your pup’s play. 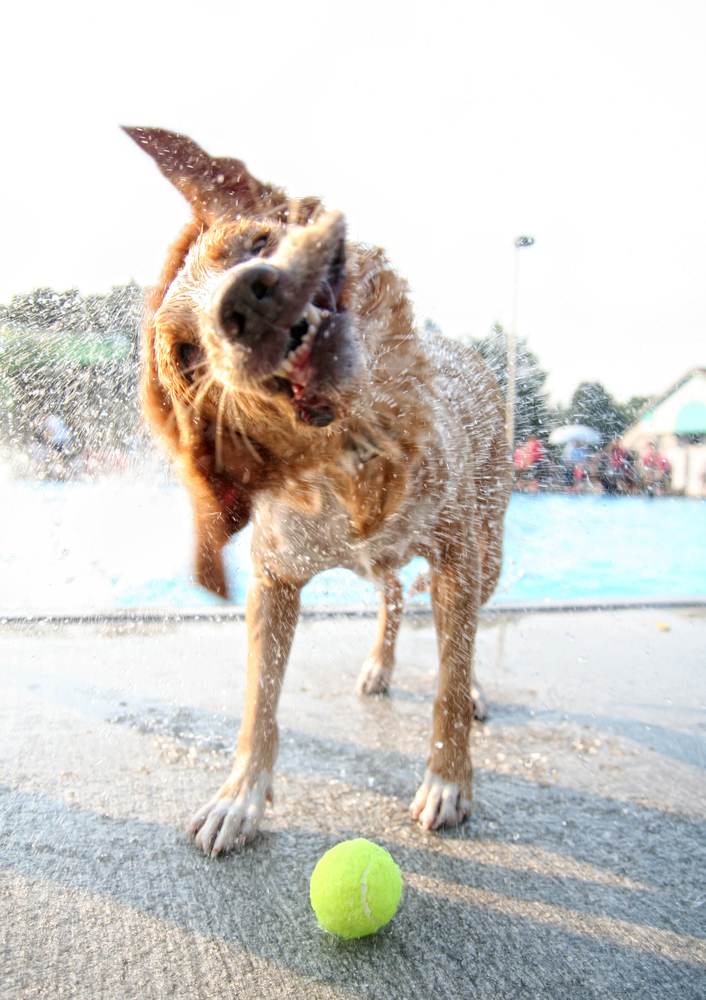 Playtime by in the pool! (Photo Credit: Annette Shaff/Shutterstock)

Individually, dogs and clean water do not stink. Yes, dogs do emanate a unique musk, but those who love them are often unbothered by it. However, the combination of the two makes even the most devoted dog lover scrunch up their nose in disgust.

So, what makes a wet dog so stinky? 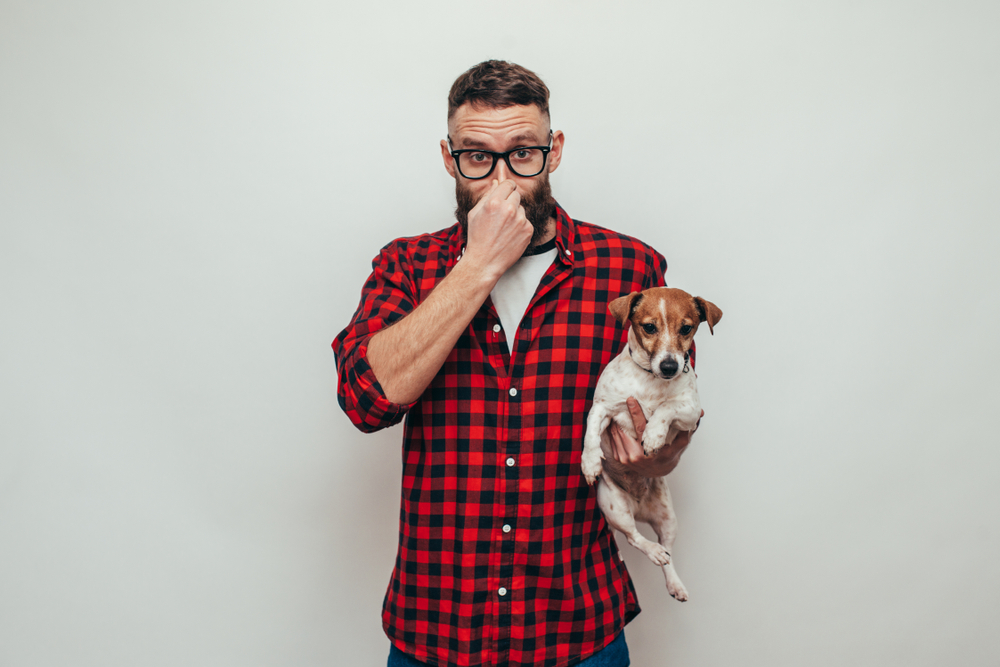 A wet puppy is a stinky puppy! (Photo Credit: san4ezz/Shutterstock)

Why Do Damp Clothes Often Smell?
If you wish to buy/license this video, please write to us at admin@scienceabc.com.

Both humans and canines have resident microbes (bacteria and yeast) dwelling on the skin and several other places, like the GI tract. This group of microscopic organisms is collectively referred to as the ‘microbiome’ and is responsible for the resultant odor after your dog takes a dip.

The thick fur of most dog breeds is a comfortable home for these microorganisms. During their stay, they continuously excrete waste products, which contain different volatile chemical compounds. It is these volatile compounds that are the real culprits of the ‘wet dog’ smell. 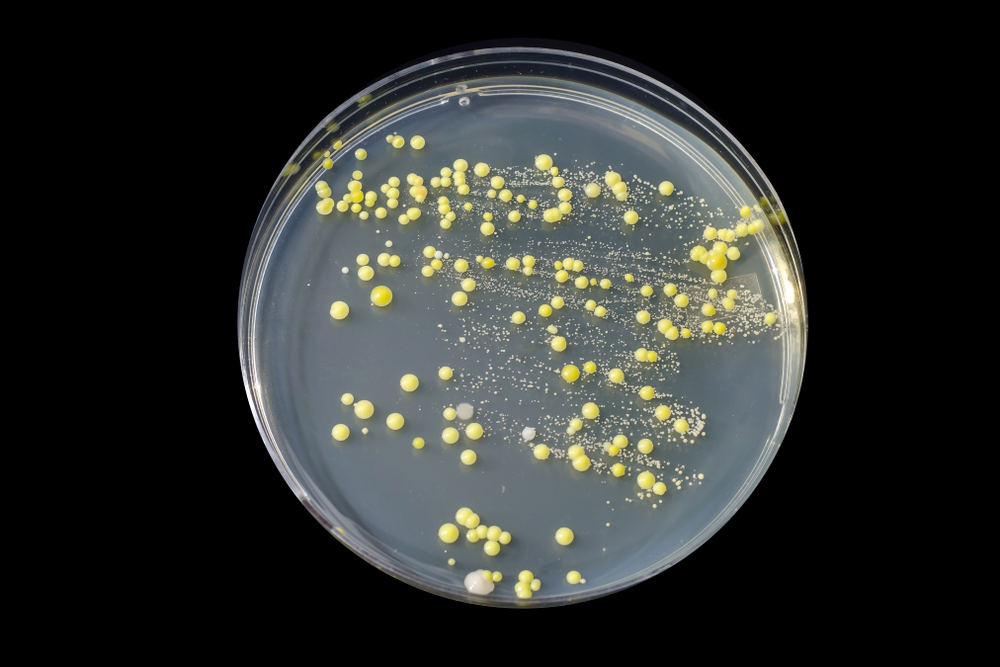 You may wonder why only wet dogs smell if these volatile compounds are continuously produced. There two reasons for this.

First, water improves the living conditions for these microbes. If a dog has been wet for a while, the prolonged moisture is perfect for the microbes to multiply beyond their usual numbers. As expected, there is an accompanying spike in the number of waste chemical compounds being produced. The foul smell of these compounds now overpowers the olfactory senses, as opposed to when the dog was dry.

Second, this makes it easier for the ‘microbe-excreta’ to evaporate. The volatile compounds get dissolved in the water, and as the water evaporates, the chemicals get released into the air.  The foul smell is now accentuated, as it can reach your nose more efficiently due to its presence in the atmosphere, along with the evaporated water.

Additionally, the evaporated water boosts the humidity of the air enveloping the dog. Humid air can host a greater concentration of odorous molecules, even further intensifying the effect. 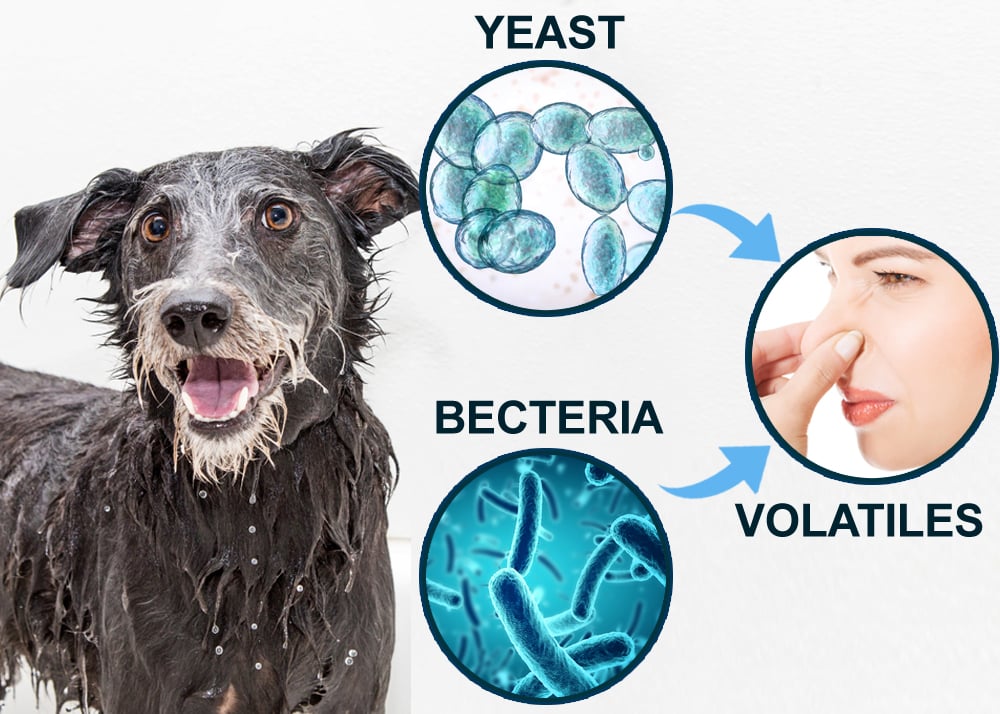 Bacteria and yeast are responsible for the stink of a wet dog (Photo Credit : Shutterstock)

Certain breeds have extra oils within their coats, particularly certain hounds. This unique oil is known as sebum, which gathers on the hair shaft and follicles to guard the skin of a canine from dehydration. When water comes into play, water and oil collectively create a conducive environment for bacterial growth.

Sebum provides an antibacterial shield by allowing microorganisms to thrive on the surface of the skin, thus preventing them from entering the body. The sebaceous glands, which secrete the sebum, facilitate the maturity of facultative anaerobes. These anaerobes utilize the lipids present in sebum to nourish themselves. As they grow, they produce microbe excreta in the form of stinky volatile compounds.

The Chemistry Behind The Stink

The chemistry behind the wet dog smell is more complex than you might imagine. No single molecule transforms our beloved furballs into olfactory assassins after getting wet. Instead, a cornucopia of molecules brings about this particular stink.

In 2002, a study was conducted to assess the variations between compounds released from wet dog fur and those from a dry dog. The results showed that the smells of individual molecules can differ widely, but together, they make a soggy dog into a stinky one.

There were compounds with smells ranging from ‘medicinal’ and ‘sulfurous’ to ‘earthy’ and ‘fruity’ in the wet dog hair. Some compounds like acetaldehyde, phenylacetaldehyde, 2-Methylbutanal and phenol were found in higher concentrations in wet fur than dry fur. The scents associated with these compounds are fruity/musty, floral/honey, nutty and medicinal, respectively.

Interestingly, 3-Methylbutanoic acid, also called Isovaleric acid, emits a sweaty odor; various straight-chain aldehydes were found in reduced concentrations in wet dog hair. These differences between wet and dry fur point to the occurrence of a biochemical or chemical reaction. Further research is required to ascertain the exact cause for this observed variation. 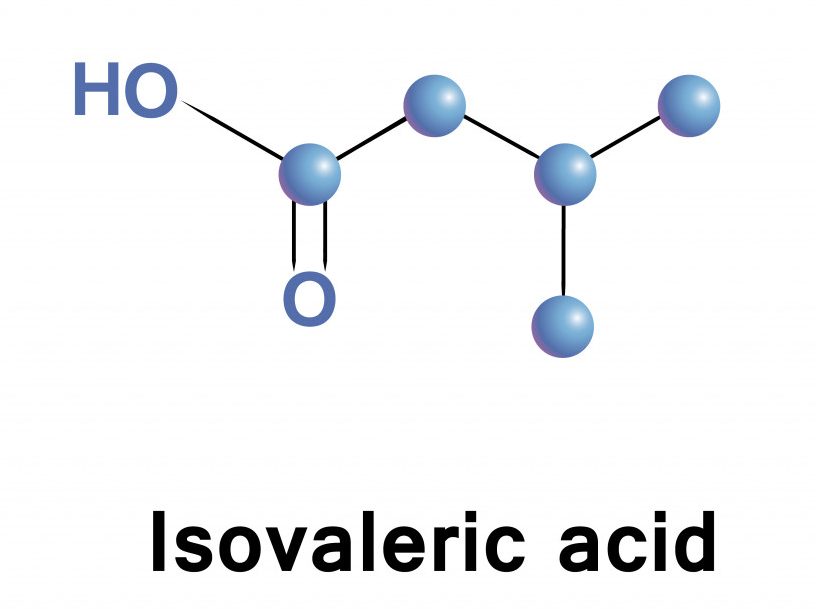 This single study proves that numerous volatile organic molecules are behind the stinky smell, but further studies are required to definitively zero in on the key odorants.

So, What Can You Do?

Now that we’ve proved that man’s best friend has been innocent all along and that their resident microbes are the real perpetrators, you might be thinking about exterminating these microscopic stinkers.

Therefore, unfortunately, foul odor and a wet dog are a package deal. Fortunately, there are ways to make it more bearable or ensure that the torture is short-lived.

Since yeast and bacteria do not grow in dry conditions, the extent of wetness and drying speed are critical factors. Therefore to prevent the odor, pet parents can try to avoid walks in the rain and dips in the pool, even though this does seem harsh for pooches who love a good splash!

For such dogs, proper drying and giving them a good wash is the only way out. Canines that dry quickly or don’t usually get too wet do not produce the characteristic body odor. It is well known that shorter hair dries quicker, but sometimes even towel-drying a very short coat won’t work. 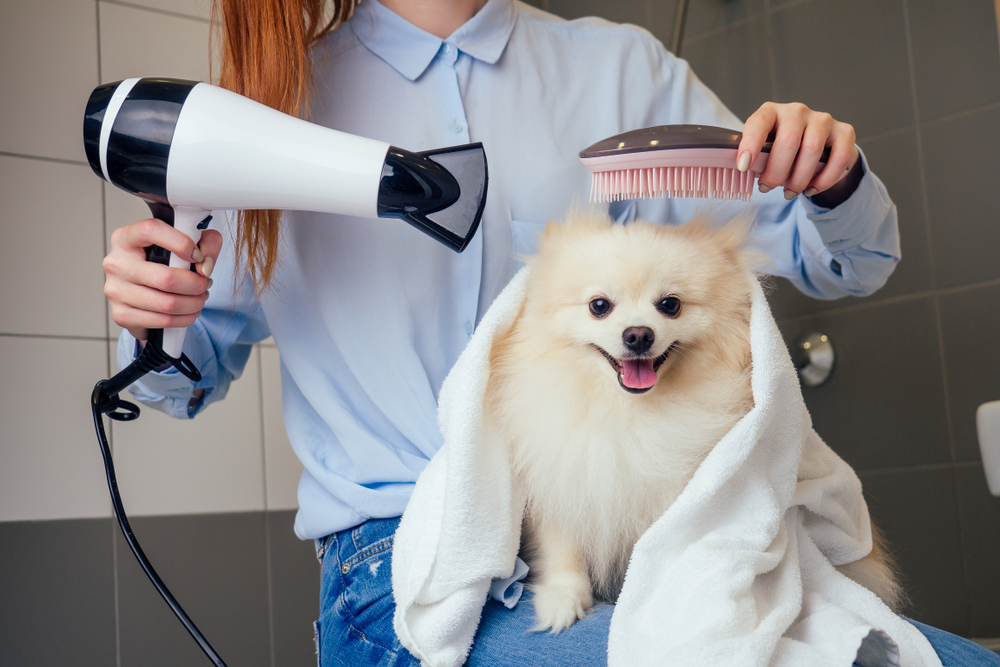 Using a hairdryer to dry a dog (Photo Credit: yurakrasil/Shutterstock)

A hairdryer can be effective in such cases. However, noisy hairdryers are not recommended for dogs with anxiety issues. They may even cause nervous dogs to go into cardiac arrest. Fortunately, several noiseless dryers are available that can solve this problem.

Also Read: Why Do Clothes Smell If Not Dried Properly? 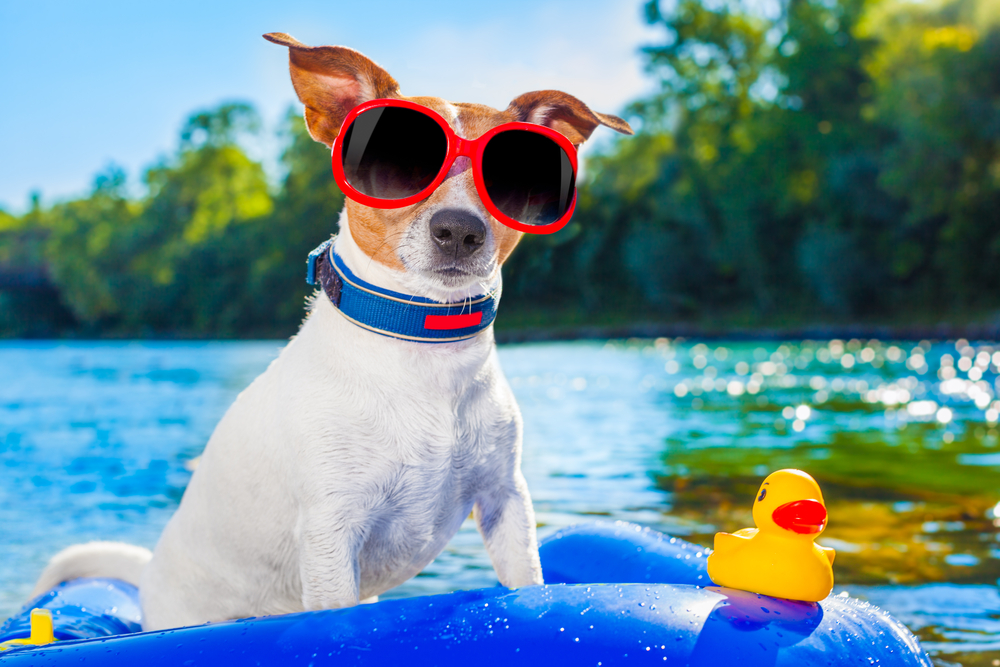 There is no denying the fact that wet dogs stink, but now that we know that microscopic bacteria and yeast are the real villains of this story, perhaps it’s time to cut our dogs some slack!