A dry ice burn is caused when extreme cold damages the skin, but why is it still called a burn?

Have you ever touched dry ice? If not, I warn you not to do so with your bare hands! My friend held a bit of dry ice in his hand to win a bet, and while he might have earned the respect of his fellow reckless friends, what did it cost him?

For the next few days, his hand was black and numb, and it looked as if he had burned it.

Why did this happen? Quite simply, he got a dry ice burn.

The question is, how does something with the word “ice” in it burn someone? Before I answer that, let’s first try to understand what exactly dry ice is.

What is dry ice?

Due to its properties, dry ice is often used as a coolant and has most recently been used to keep vaccines cool during transport. You may have come across fog machines on stage at concerts; dry ice is also responsible for that dreamy effect!

If you’ve ever seen dry ice, you will likely notice fumes coming out of it. That’s because the dry ice is changing its state from solid to gas. This process is called sublimation. Carbon dioxide sublimates at -78°C. It doesn’t melt like normal ice because, under normal atmospheric conditions, carbon dioxide exists as a gas, rather than as a liquid. So, instead of melting and turning into a liquid, dry ice skips the liquid stage and evaporates directly into a gas.

Now, to return to our main question, why would a cold thing cause a burn? Burns are usually caused by hot things, right?

Believe it or not, dry ice causes something called an “ice burn”. 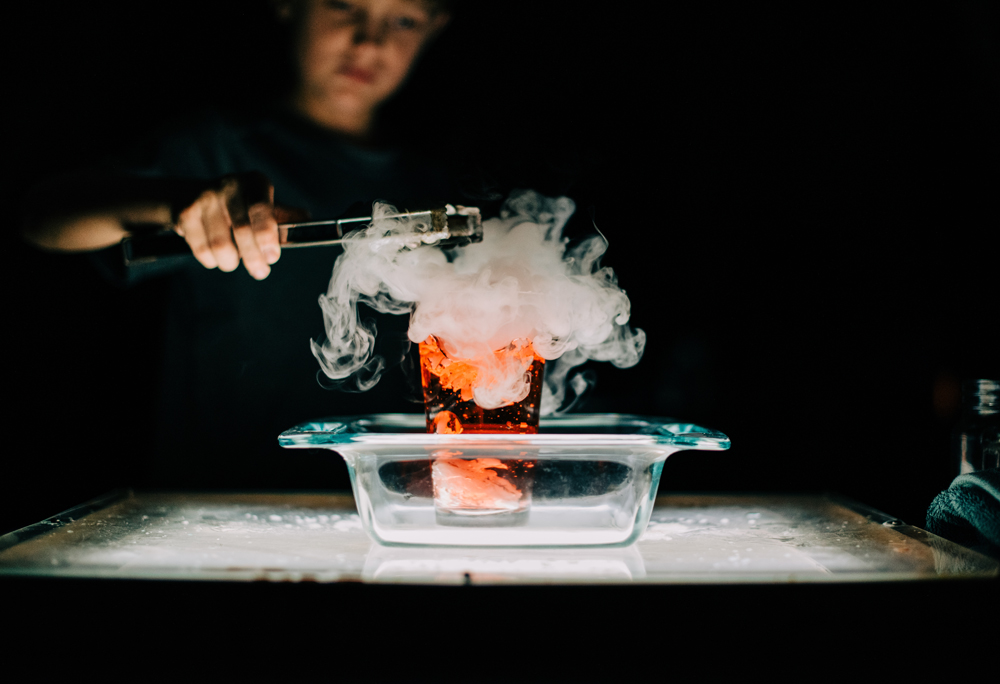 What is an ice burn?

An ice burn is an injury caused by contact with an extremely cold object. It usually occurs after prolonged exposure to freezing temperatures.

It is called an ice burn because the injury is very similar to an actual burn. The injured region can be sore, itchy, red or sometimes black and numb for days. An ice burn can happen by exposing oneself to extremely frigid temperatures, but the necessary exposure time would vary depending on the temperature.

In my laboratory, for example, many chemicals are stored in dry ice. In such cases, I carefully take my things out of the box and avoid touching the dry ice with my hands as much as possible. If I ever do touch it, it feels like a jolt of electricity is shooting through me and delivers an incredibly painful sting.

Dry ice burns because it is so cold that when it touches the skin, the skin cells rupture and die.

When the cells come into contact with dry ice, the water in the cells freezes in the form of crystals. The crystals cause the cells to rupture, and we feel this damage to our skin cells in the same way as we would a burn.

Below -0.55°C (21°F), ice crystals form within the cell, and depending on how cold the object is, the time it takes for an ice burn to develop will vary.

The difference between an ice burn and a hot burn is in the way the cells break open. In the case of the hot burn, the heat burns the tissue. An ice burn, however, leads to the formation of ice crystals within the cells, which ruptures the cell membranes. 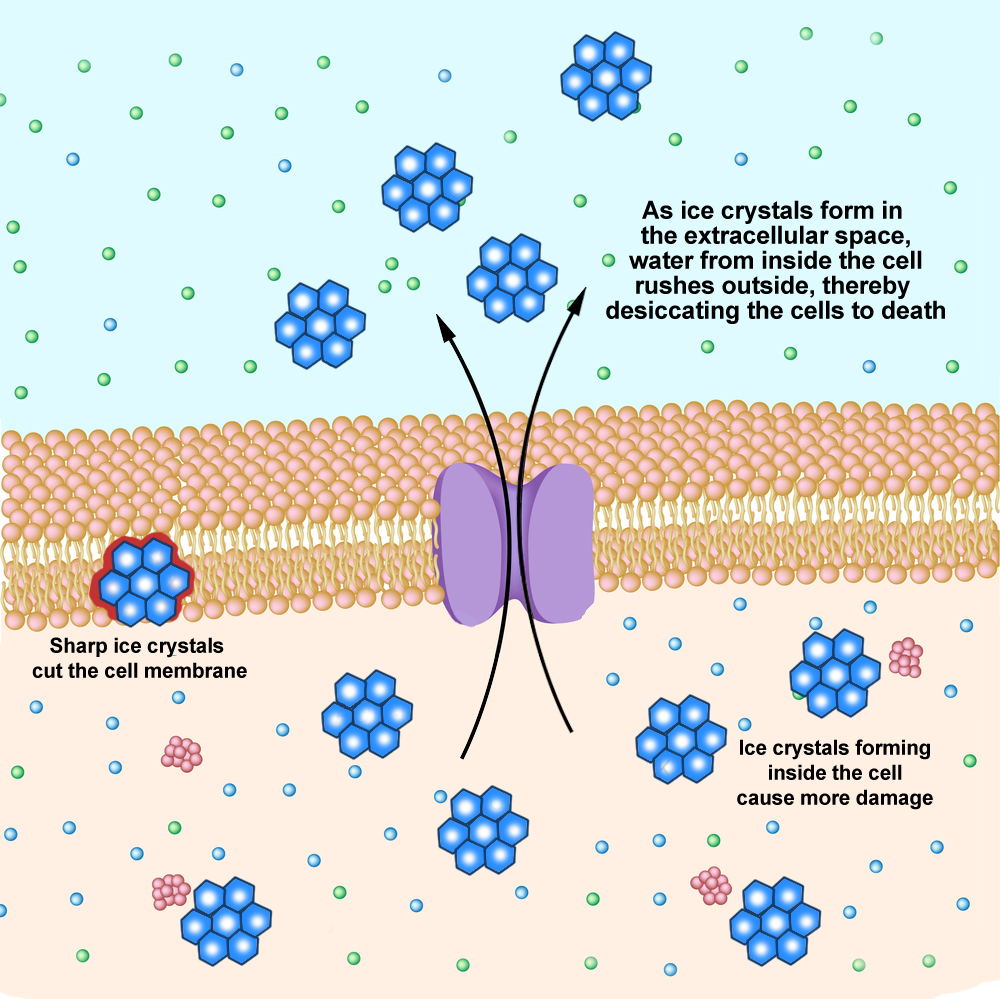 In addition, the blood vessels close to the burnt skin constrict, which reduces blood flow to the area, causing further damage to the injured area, which leads to numbness. Furthermore, cold reduces nerve conduction so much that we lose sensation in the affected region. At such extremely cold temperatures, the dry ice would be able to destroy nerve endings within minutes.

Ice burns and frostbite are somewhat similar and caused by the same thing – cold. However, frostbite is more severe. Ice burns occur when the cold begins to freeze the water in the cells, whereas frostbite freezes the entirety of the skin and underlying tissue.

It is better to play it safe—never eat dry ice! It is nothing like eating ice. Dry ice can burn the inside of the mouth and intestines very severely. 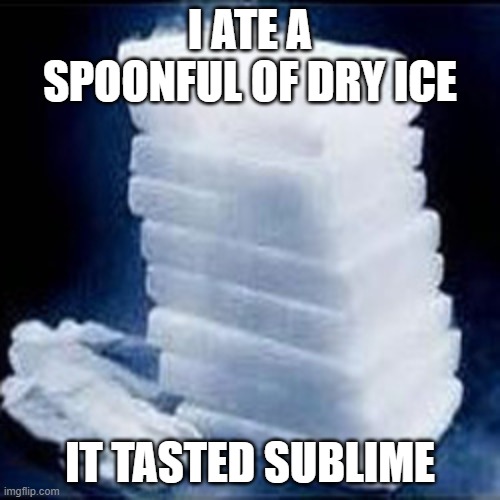 Prevention and treatment of ice burn

Ideally, if you ever use dry ice, use cryo-protective gloves.

In the case of an ice burn, the most common treatment is to soak the injured part in lukewarm water. Be careful not to use hot water, as this can make the burn worse.

Applying ointments, such as aloe vera cream, can also help soothe the discomfort. If the burn is really bad, consult a doctor immediately.

Be very careful when working with dry ice. Instead of stupid and pointless bets, there are much safer experiments you can try with this unique substance.

Take a plastic bottle and add a small chunk of dry ice. Add some water, seal the bottle and throw it into an open and empty space. Stand some distance away and wait for the bottle to burst open!

The water quickly raises the temperature of the dry ice, which causes it to sublimate rapidly. Carbon dioxide gas is quickly formed inside the sealed bottle, which increases the pressure and causes the bottle to burst. It’s basically a dry ice bomb!