Fire causes the non-uniform heating of glass. This results in thermal stress on the material, which causes the breakage of glass windows.

We’ve all enjoyed action movies, especially those breathtaking climaxes, wherein a gigantic tower is on fire and the shattered pieces of glass rain down from the sky. Alas, no sign of the hero, but finally, after the shattering pieces of glass grow silent, the hero comes out standing tall.

As overly dramatic as the scene may seem, there is a pinch of reality to it. The breaking of glass due to fire is not just a piece of movie magic, but is known to occur in real life too. Unfortunate incidents, such as compartment fires, are known to cause the breaking of glass.

Why does glass break during a fire?

The openings or the windows in the walls of a room on fire play a key role in the spread of fire. Windows are those parts of the building that generally have less resistance to fire, in comparison to walls. During a rising compartment fire, there is an increase in temperature inside the room. The breaking of glass panes occurs due to the non-uniform heating caused by fire.

The glass pane is not subjected to uniform heat from the compartment fire. The region of the pane that succumbs to heat the most is the central region. As a result, the center of the pane is hotter than the rest. Thus, the heatwaves from the fire create a ‘heat gradient’ across the planar dimension of the pane. Different regions of the glass pane experience differential heating, which is why this is called non-uniform heating. There are various factors that lead to the ‘non-uniform heating’ of glass. These will be discussed shortly. 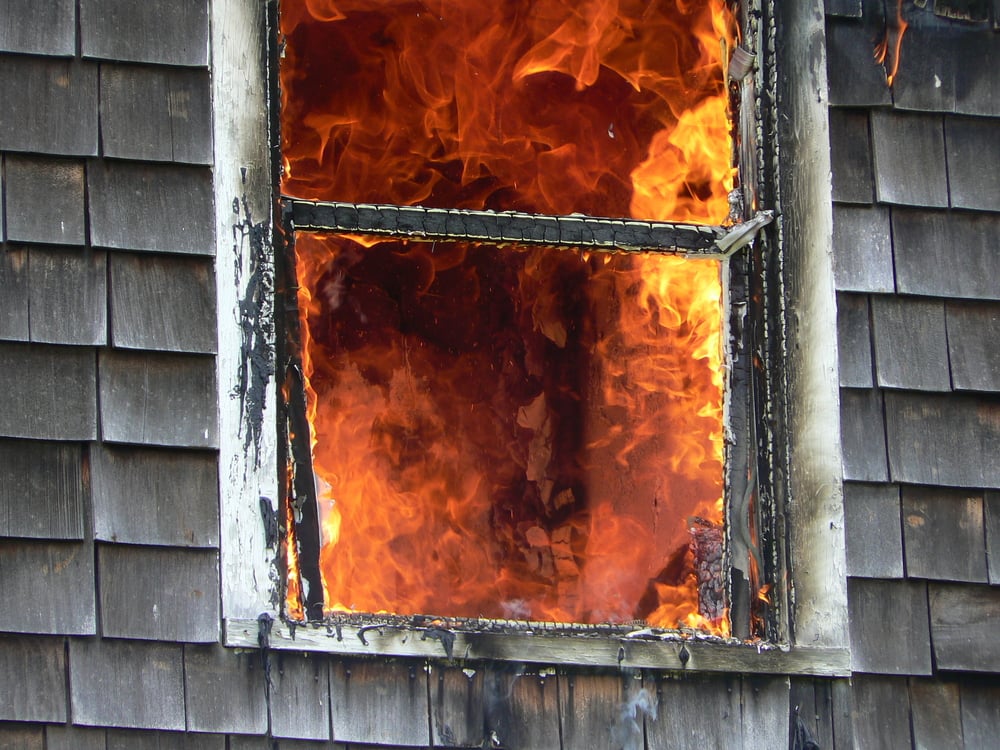 Window broken due to a fire (Photo Credit : Ron Frank/Shutterstock)

How does glass break due to a fire?

The thickness of the frame is greater than that of the pane. During a fire, thermal stress is focused on the central region of the pane, and the fire transfers thermal heat as thermal radiation onto the glass pane. The edges/rims are shielded from radiation and convective heating. The edges lose energy/heat into the frame by conduction through the pane.

As a result, the heat focused on the central region of the glass causes it to expand. While the edges of the pane happen to be relatively cooler, this induces stress in the material. This shifting gradient is known to cause the breakage of glass. 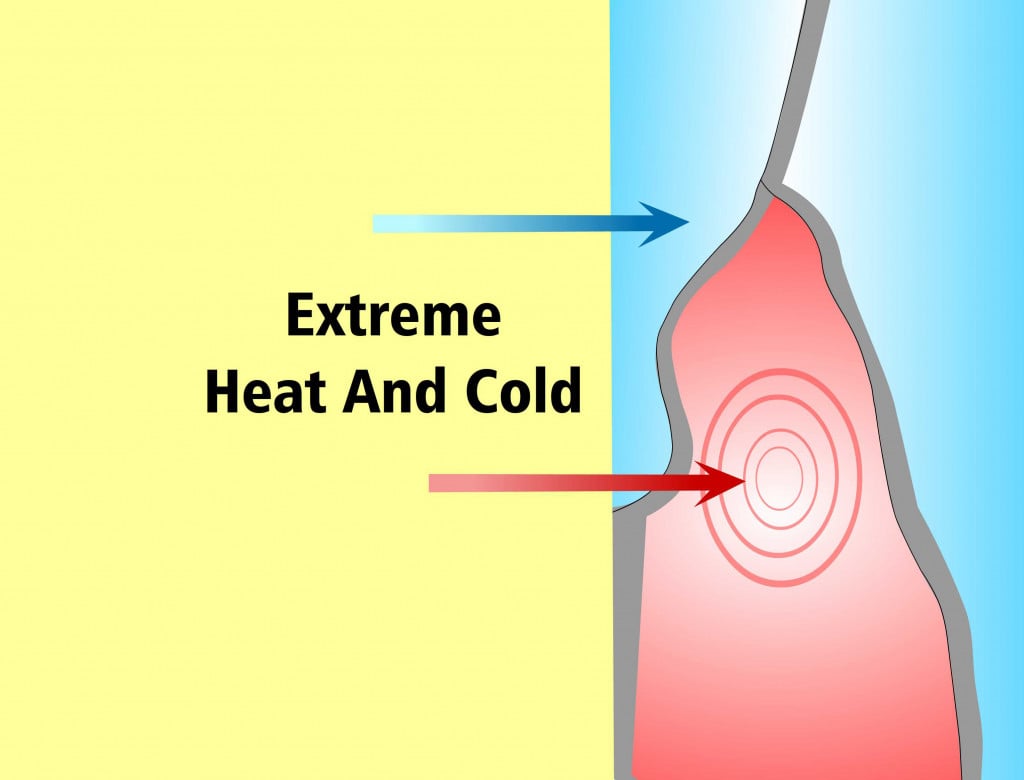 Illustration of a temperature gradient leading to cracking of glass

Even in cases of uniform heating, or when the glass window experiences a uniform thermal load, the sides/panes of the glass remain relatively cooler. This is because the heat from the sides would dissipate into the thicker window frames, rendering the sides cool.

The cracking of glass happens before breakage. Cracks originate from the sides of the glass embedded in frames. The time between the glass first cracking and completely shattering is dependent on the type of glass and the nature of the fire. Crack originating from the edge of the window (Photo Credit : cunaplus/Shutterstock)

Factors affecting the breakage of glass:

Not all glass windows break at the same temperature. Different types of glass have different thermal resistance capabilities.

(1) Thickness of the glass pane.

The thickness of the glass is a major factor that affects glass breakage. Several experiments were conducted in order to understand the relationship between the thickness of glass and thermal stress. The following observations were made:

The type of glass in context also makes a difference.

Plate glass used in commercial buildings was tested for its thermal resistance. Plate glass of 6 mm thickness broke on exposure to a radiant heat flux of 23 kW m-2. The time taken for it to shatter was 7 minutes.

The window-frame material is also known to have a significant effect on the breakage of glass caused by fires. Studies have shown that vinyl-frame windows succumbed to early damage. The frame was damaged when the heat fluxes rose to the range of 8 to 16 kW m-2.

Apart from the above mentioned aspects, factors like window size, heat vents, glass coating, shading patterns, glass defects, and planar temperature gradient are also known to affect the breakage of glass due to fires. These factors are still being studied and analyzed. Why is it necessary to study the thermal resistance of glass?

Although this discussion might seem futile to us, it is of the utmost priority to many people. The breaking of glass during compartment fires is a critical problem, as windows act as obstacles before breakage and as vents or openings after breakage.

Fire science is very important in fracture mechanics. It is crucial in sectors of machine building and civil engineering. In order for fire models to be used, vents and fire openings must be investigated. Hence, glass breakage and its resistance has been of keen interest to fire modelers. Knowledge of fire exits, vents, and windows becomes important in order to prevent mishaps.

Even when it comes to automobiles, the strength of the glass used is carefully analyzed. These contexts and many more have given rise to a number of theoretical, empirical, and practical experiments being carried out in order to study the fire resistance capability of glass.