If you have a Windows computer, head to the ‘Computer’ (or ‘My Computer’, in older versions) icon and open it. A window that looks something like the following picture will open: 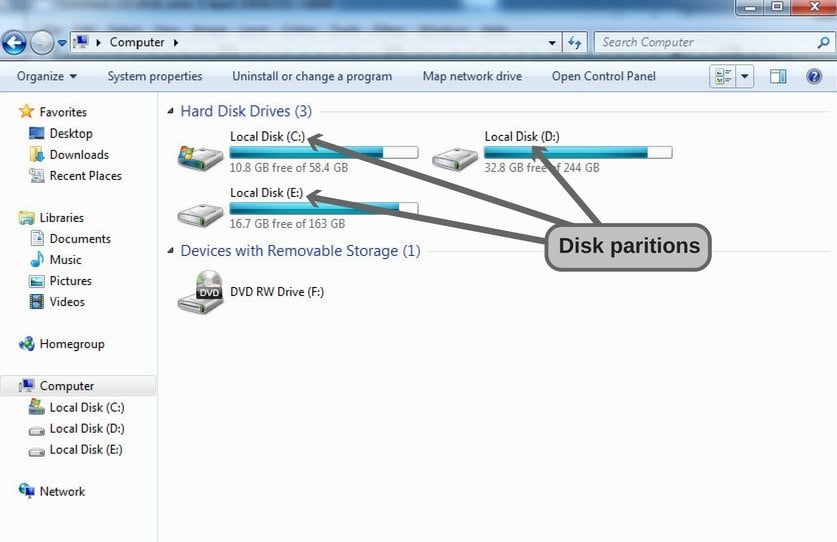 If you’re one of those users who refrains from altering the defaults and simply use the computer with all its factory settings, then you will notice that the hard drive in your computer almost always starts with the letter ‘C’. In other words, among all the partition icons of the hard drive (like C, D, E and so on, depending on the number of partitions you’ve created), the first drive will bear the letter C. Some folks don’t create any partitions at all, so they will find a single partition with the default title ‘Local Disk C:’.

Why is that? Why is ‘C’ the default drive letter – rather than ‘A’, which would make more sense intuitively – on so many computers? As it turns out, there is an interesting reason behind this C domination…

The Early Stages Of PCs

You might be a bit surprised to know that the hard disk drives, which are installed inside computers these days, and act as the basic storage units, were virtually non-existent in computers until the late 1980s. Although hard disks (albeit in rudimentary forms) have been around since the 1950s, they were not a standard/essential part of the computer system due to their high cost.

To cater to storage needs, computers came out with a floppy disk reader, i.e. a device that could read floppy disks. Youngsters these days probably might not even know about these obsolete devices, but floppy disks are a type of disk storage that come in a rectangle/square shape and consist of a magnetic storage medium to store data.

Also Read: How Is A 1-Terabyte Hard Drive Physically Different From A 2-Terabyte One?

Most standard floppy disks (like 5 1/4″, 3 ½” variants) could not store more than 1 MB’s worth of data. Plus, they were huge, as compared to the tiny, sleek data sticks we use today that hold tens of thousands of times more data than floppy disks ever could.

Therefore, it’s not surprising how quickly floppy disks were replaced by compact discs, and eventually became completely obsolete, to the point that finding a working floppy disk drive in a computer these days would be nothing less than a miracle! If you were using floppy disks instead of a disc, it would take no less than 3,711 floppy disks to install Windows 8.1 on your computer!

Returning to the point, the floppy disk drives in computers using MS-DOS or certain other operating systems were labelled as ‘A’. Then, certain technological improvements were made and the new systems came with two such floppy disk drives, providing even more storage capacity. This new drive was, quite predictably, labelled ‘B’. No new disk drives were added, so these two labels – ‘A’ and ‘B’ – stuck for floppy disk drives.

Everything that we discussed above was during the time when hard disk drives were far too expensive to be added to every computer. Fortunately, with significant advancements in the hardware industry, hard disk drives grew more affordable and became a standard component in most computers by the late 1980s. Now, these new systems consisted of both floppy disk drives (A and B), as well as a hard disk drive. Labeling this new member as ‘C’ was the logical thing to do.

Also Read: Why Do Transfer Rates Vary When Copying A File From PC To USB Stick And Vice-Versa?

Times changed and eventually, floppy disk drives were entirely removed from computers, but somehow the label ‘C’ stuck with hard disk drives. In fact, most Windows computers come with the first partition labelled as ‘Local Disk C:’ for that same reason. Of course, these labels are not set in stone. You can easily change them with a few clicks on your computer, provided you’re using an Administrator account. However, most people usually don’t bother doing it, because…