Bathtub sizes and styles vary around the world, but their overall size is dictated by the cost, cultural norms, bathing trends, available square footage in the house, and safety factors, among others.

Imagine that you’re on a trip for work, navigating a new city and the choppy waters of a different office, and all you want to do upon getting to your hotel is a relaxing bath. You don’t have a bathtub at home, and you want to treat yourself. However, after patiently waiting for the tub to fill up, pouring yourself a drink and disrobing, you slide into the tub, only to realize that you feel like a giant. If you want to fully recline, you need to bend your knees out of the water, and if you stretch your legs out straight, your torso pops out of the steamy water.

Your initial reaction may be surprise at this miniature motel, but you aren’t the first person to lament the average size of bathtubs, which most people these days generally agree is too small! If this is such a common complaint, the question must be asked… why are bathtubs typically shorter than a person’s height?

The idea of a bathtub dates back more than 5,000 years, to the earliest plumbing systems ever discovered, in the Indus Valley of ancient India. Even personal bathtubs have been around for a few thousand years. From wooden barrels and copper basins to modern-day porcelain tubs, the idea of personal bathing has long been a source of innovation and fascination. That being said, the act of fully bathing has gone in and out of style, and has often been available only to the wealthy. In the past 200 years, personal bathtubs for the common person have become more popular. 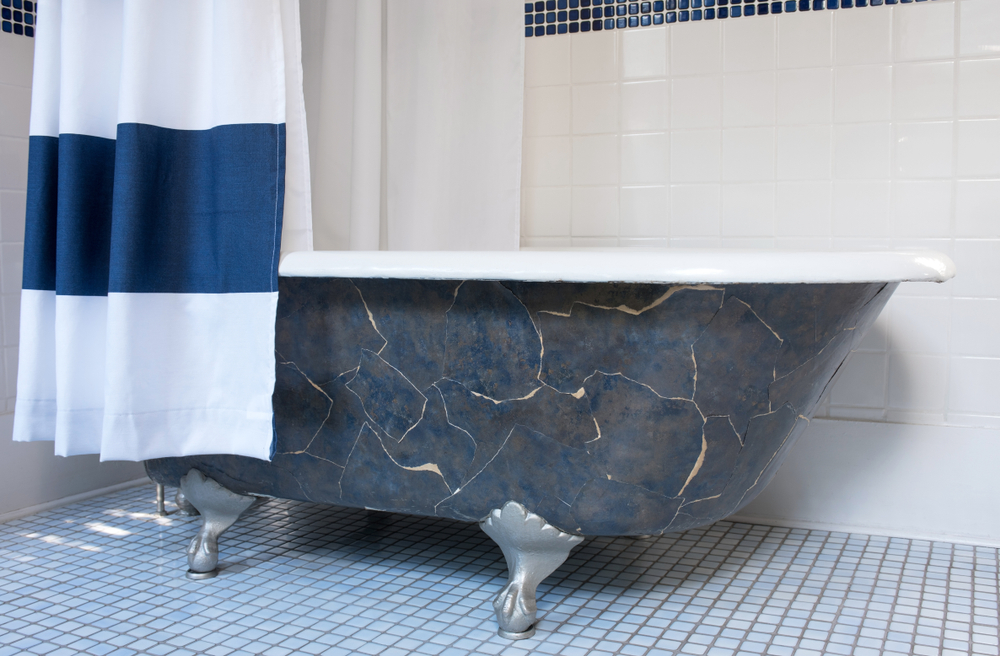 Bathtubs in Europe were often made of iron, tin and copper, and were commonly in the clawfoot style, with four small claws or feet holding up the larger bathing basin. By the beginning of the 20th century, it was discovered that porcelain could be bound to cast iron, making them more durable, easier to produce, and easier to clean. By the middle of the 20th century, fiberglass tubs became the standard, due to their durability and lighter weight.

To this day, you can find antique clawfoot tubs and modern replicas, as well as large, custom-designed tubs, but the standard bathtub in most homes and shower/tub combos is 36″ x 60″ (3 feet by 5 feet). Considering that most people aren’t under five feet tall, it seems foolish to design a standard bathtub size that doesn’t seem to fit most people. What could possibly be the reason? 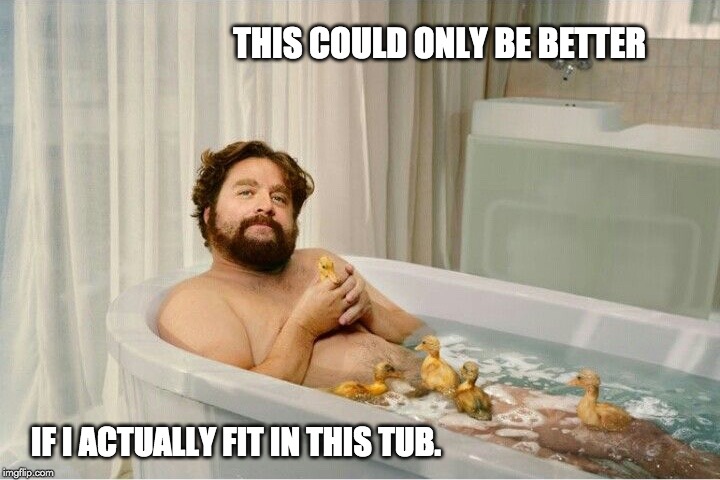 Although there is no formal or universally accepted answer to this article’s question, there are a number of factors that have likely lead to this “small” tub size, including safety precautions, typical function, cultural norms, cost and efficiency of space usage.

Taking a bath is a traditionally relaxing activity, allowing someone to let their cares drift away as they close their eyes and inhale the aromatherapy in the air. Dozing off in the bathtub, however, particularly after a glass of red wine, could be extremely dangerous if you slip beneath the water. Having a bathtub that is slightly shorter than the average person means that if they do slip down in the tub, their face will likely not submerge, as their feet will prop up their body, preventing any unfortunate accidents. This might make it difficult for a tall person to keep the majority of their body submerged, but it could save the life of many shorter bathers!

Furthermore, the weight and size of a bathtub (even one made of fiberglass) can make it prohibitively hard to move and install. If a tub is too wide, it will be hard to get it through the door of the bathroom, and if it’s too long and heavy, two people may be unable to safely move it!

In many parts of the world, including the United States, baths are more often associated with children than adults, at least in terms of daily hygiene. Due to the smaller size of children, and the less frequent use of the bathtub by adults, having a smaller bathtub makes sense. Most homes and apartments come with shower/tub combos, yet the residents may choose to use the shower the vast majority of the time. Some parts of the world prefer compactness and economy in their architectural and domestic design, which leans towards a smaller bathtub. Additionally, at least in America, taking baths feels like a thing of the past, a trend that is becoming less and less common in our hectic, fast-paced modern world. 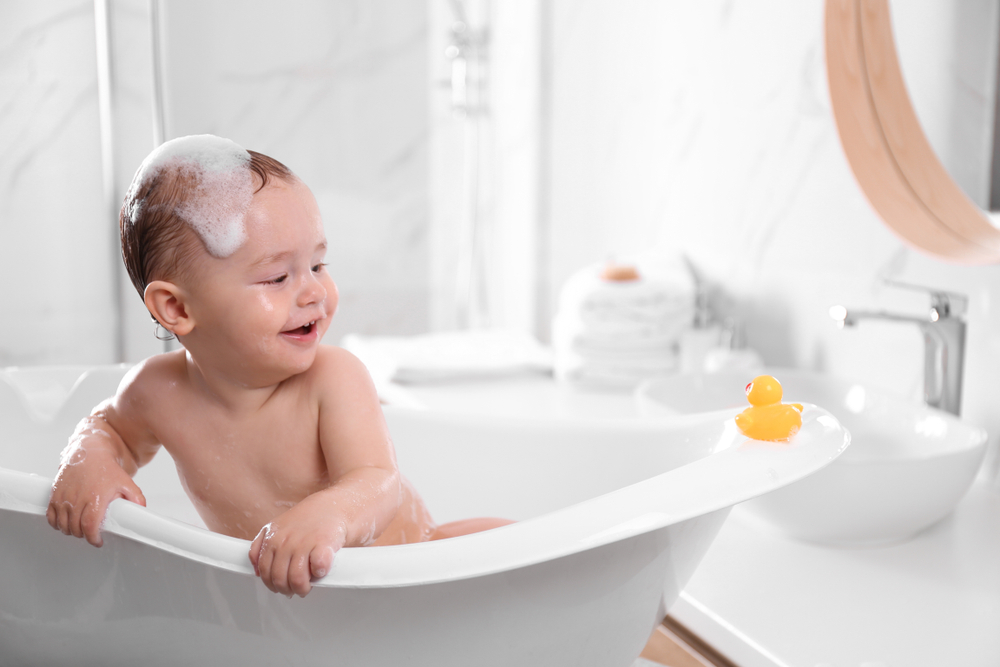 As mentioned, in some parts of the world, taking baths is far more common for adults. Depending on where you are, you may find the bathtubs quite luxurious. In America, many people complain about the size of bathtubs, whereas Europe often has larger standard sizes. Parts of Asia and Europe prefer larger bathing spaces, seated bathtubs that are smaller and deeper, or much larger public bathing areas. There are exceptions to cultural norms, of course, but the country you’re bathing in may have something to do with your level of comfort!

Having a standard size and material for bathtubs has allowed for mass production and a relatively low price. In most cases, you can buy a basic bathtub for a few hundred dollars, although the installation and other construction around a bathroom project may cost much more! If you want a custom bathtub, perhaps one that is wider or longer, the cost can quickly rise into the thousands of dollars. For an empty basin that some families will only use a few times a year, spending a large sum for extra tub room simply isn’t worth it. 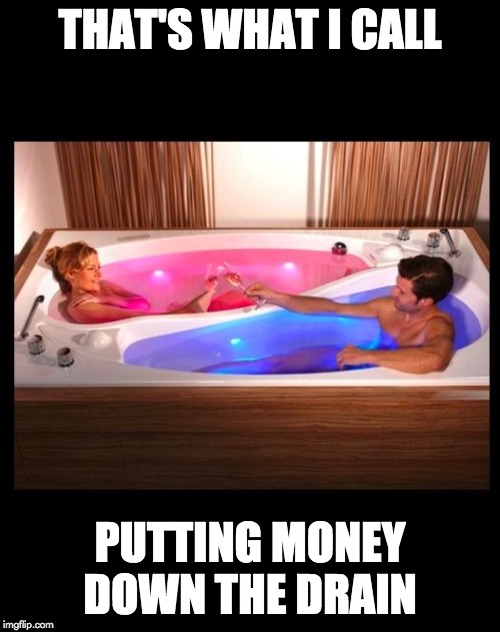 Most home and apartment designs base their room sizes off standard expectations for appliance size. For example, if you are looking to buy a pre-made home, rather than designing it yourself, the bathrooms will have likely been designed to fit a basic bathtub, and any adjustment you want to make on that will likely rob you of space in another room. The square footage of a property is very valuable, so architect and engineers try to use it as efficiently as possible. A smaller bathtub creates the sense of more space, and leaves more room for other high-value aspects/rooms of a house.

Next time you are feeling cramped in your bathtub, wishing you had a further six inches to stretch out your legs, remember that the condensed nature of the tub is intentional! Having a tub that is only five feet long can help keep you safe, save you money, align with cultural norms and utilize the space in your home efficiently!