The Fallout From Atomic Testing Tell Us About Our Moon that the conditions around which trinitite was formed can help us test the theory of our moon’s formation. The most popular hypothesis behind the origin of the moon is this: Around 4.5 billion years ago, a planetoid the size of Mars hit an earlier version of Earth and flung a massive amount of debris into space. Then the debris came together, got locked in Earth’s orbit, and eventually turned into the spherical moon we know and love!

The Jordana del Muerto or “Route of a dead man” in New Mexico was an undisturbed and arid desert, much like any other. That was true until 5:30 am on July 16th, 1945, when a flash of light brighter than the sun radiated over the desert. The area code-named The Trinity Site witnessed the testing of the world’s first nuclear bomb. The 8-mile-high mushroom cloud from the plutonium bomb detonated by the US Army marked the dawn of the atomic age.

It also created nuclear fallout that could help us better understand the formation of our moon and even catch wine fraudsters.

Before we get into how radioactive isotopes are used to fight crime, let’s have a quick refresher on how they were created.

The neutrons and protons inside an atom are held together by a force known as strong nuclear force. When a free neutron hits the nucleus of a radioactive atom, it disrupts the strong force and splits the atom into smaller fragments. This splitting process is known as nuclear fission, resulting in the release of huge amounts of energy.

Radioactive isotopes plutonium-239 and uranium-235 were used at the core of atomic bombs because of their ability to readily undergo fission reactions. Once a neutron hits the nucleus of these isotopes, it initiates a chain reaction that moves from one atom to another. The self-sustained chain of nuclear fission reactions are responsible for the massive amount of energy and radiation released during a nuclear explosion. To read more about atomic bombs, click here.

After nuclear explosions, millions of neutrons are sent flying through the air. Some of the neutrons bump into the nitrogen (atomic mass =14, 7 neutrons and protons each) in our atmosphere, get absorbed in its nucleus, knock out a proton in the process, and turn into C-14 (atomic mass=14, 8 neutrons, 6 protons), a radioactive isotope of Carbon or C-12.

C-14, although very rare (1 C-14 per trillion C-12 atoms), has always been present in our atmosphere due to interactions between N and cosmic rays. However, atomic testing between the 1940s and 1960s created a tremendous spike in C-14 concentration—almost 100% more than what we had before the atomic age!

C-14, just like normal Carbon, reacts with oxygen to form carbon dioxide, which then enters life forms on Earth via photosynthesis and respiration. We don’t use the CO2 generated or inhaled by our bodies, but plants do. The C-14 that enters the plants then gets passed on to all living things via the food chain and is replenished at a constant rate throughout their lifetime. However, once it’s over the C-14 also starts to degrade at a constant rate.

Also Read: How Was The Moon Formed?

Art crime investigations often use this phenomenon to verify if a painting is an antique masterpiece or a modern forgery. Nuclear explosions have left their own fingerprint in the form of “bomb spikes” in C-14 concentrations. This can be easily detected by carbon-dating the wooden frame of a painting, the canvas, or the paint binders made from egg yolks. The higher the C-14 concentration, the newer the materials, especially if something was derived from organic matter that was alive after the 1940s. To read more about art forgery detection, click here.

Like art, collecting really old wine also has a huge market that is often prone to fakery. In otder to verify the aged wine inside the bottle without opening it, auction houses look for remnants of nuclear fallout. Cesium-137, a Uranium-235 fission product that did not exist in nature before the 1940s somehow found its way into the grapevines. The wine made from grapes containing the radioisotope emits low-level gamma rays, which allow investigators to non-invasively date the contents. THus, if a wine bottle worth 157,000 dollars shows traces of Ce-137 then it’s definitely not a 1787 Lafitte (a very expensive wine).

Gadget, the bomb tested at the Trinity Site, held 21,000 tons of dynamite explosives, along with the plutonium core. The explosion lifted off a large amount of sand into the air and created a huge crater that is 10 feet deep and 1000 feet wide. The denotation region reached temperatures that were 1.5 times hotter than the sun. This melted some of the desert sand and forged it with elements flying around to form a green atomic rock — Trinitite.

Trinitite is one of the rarest minerals on Earth, as it can only be found near a nuclear explosion. It is radioactive due to the trapped plutonium and uranium, along with the fission products. It is mainly composed of quartz, rich in aluminum, sodium, and potassium. The color of trinitite glass depends on the exact location it was forged. If it formed near the steel tower that held the bomb, the rock formed is iron-rich and green in color. If there was electrical wiring near the meting sand, then the glass formed will be red due to the presence of copper. 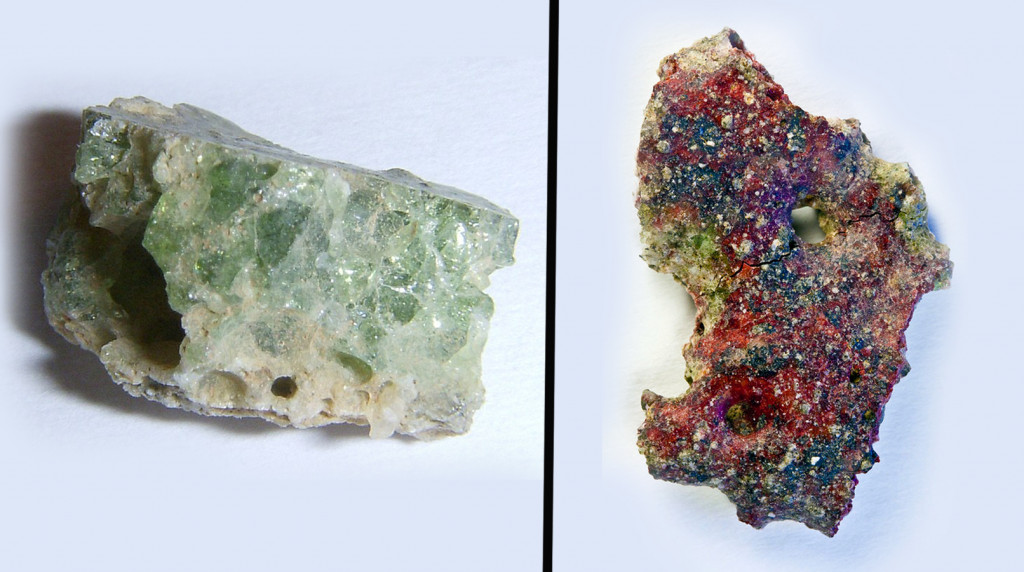 This “pretty” nuclear fallout became a collector’s item soon after the testing. The PR team of the Manhattan Project even had an actress wear jewelry made of trinitite to ward off fears against residual radioactivity. Fortunately, in 1952, the government banned removing trinitite from the site and the radioactive rock now lies buried under the sand.

A recent suggestion is that the conditions around which trinitite was formed can help us test the theory of our moon’s formation. The most popular hypothesis behind the origin of the moon is this: Around 4.5 billion years ago, a planetoid the size of Mars hit an earlier version of Earth and flung a massive amount of debris into space. Then the debris came together, got locked in Earth’s orbit, and eventually turned into the spherical moon we know and love!

Trinitite found at the Trinity blast site was dried out of zinc and other volatile elements due to extremely high temperatures. The leftover material was enriched with heavier isotopes. A similar lack of volatile elements and water has been seen in the composition of rocks brought back from the moon. This evidence suggests that the giant impact between planets and the Trinity atomic test created similar extreme pressure and temperature conditions when the chemical reactions forming the rocks were taking place.

Also Read: What Would Happen If A Nuke Exploded In Space?

The reactions triggered inside the plutonium core of the first nuclear bomb 76 years ago are still present in our environment. This was a bomb testing that changed the course of history and the chemistry of our atmosphere.

In September of 1996, the United Nations set up the Comprehensive Nuclear-Test-Ban Treaty (CTBT) as an international effort to protect life and its ecosystem from the long-term effects of nuclear explosions.