The moon does not have an atmosphere like Earth does. Its atmosphere is very thin and consists mostly of helium.

The claims that Eskimos have a thousand words for snow or the classic “we only use 10% of our brain” are mere scientific myths. No one knows at what vague point these were imprinted in our scientific history and then amplified to the extent that they’ve become “common” knowledge.

A similarly common misconception is the moon’s lack of oxygen and the absence of any atmosphere around it. 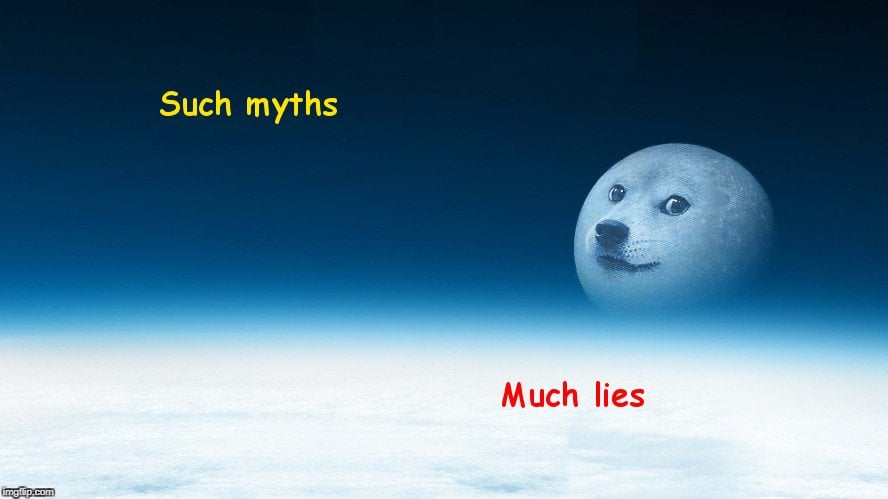 How are atmospheres formed?

An atmosphere is just a concoction of various gases. Initially, the original atmospheres in the universe consisted only of hydrogen and helium atoms, as these were the most abundant gases in the dusty disk around the Sun from which the planets formed.

Another major contributor is the material accumulated in the depths of a planet itself. For instance, the huge amount of nitrogen in Earth’s environment is the result of the reaction between sunlight and ammonia, which sprung from our violent volcanoes some hundreds of millions of years ago. These gas molecules wander around and escape into space, but a large share is retained by a planet’s gravitational pull. This is why larger planets like Jupiter, Saturn and Neptune have thicker atmospheres.

Hydrogen and helium atoms’ low mass and high speed allowed them to escape our gravitational pull and drift into space. However, the attraction of larger planets is so strong that, despite their elusive nature, they still wound up stuck in other atmospheres — the composition of Saturn and Jupiter’s atmosphere still displays an abundance of hydrogen and helium.

With the knowledge that atmospheres aren’t mysterious space blankets, but rather a mixture of gases formed on a planet, which – subject to gravity and temperature – decide whether or not to continue their stay, we can go on to ask what the moon’s atmosphere includes.

According to the above logic, one can postulate that, due to the moon’s tiny mass and consequently weak gravitational pull, even though it is enclosed by an atmospheric layer, it is bound to be infinitesimally thin. This is indeed the case.

In fact, the layer is so thin that the blanket is only deemed to be almost an atmosphere. This thin layer above the lunar surface is technically known as an “exosphere”. In an exosphere, the gas molecules are so distanced that they never seem to collide.

Several elements have been detected in the moon’s atmosphere; for example, the Lunar Reconnaissance Orbiter (LRO) recently found helium. Detectors that were left by the Apollo astronauts also found argon-40, helium-4, oxygen, methane, nitrogen, carbon monoxide and carbon dioxide. Earth-based spectrometers have found traces of sodium and potassium, while the Lunar Prospector detected some radioactive isotopes of radon and polonium.

Where did the exosphere come from?

The major source of the gases constituting the atmosphere (or exosphere) is out-gassing – the emission of gases from the lunar interior. Out-gassing is mainly caused by radioactive decay. Such an event might also occur during moonquakes. After being liberated, the gases flow towards the surface almost immediately. The gases can also be freed from the soil by sunlight or gusty solar winds, as well as micrometeorites brashly hitting the moon and knocking atoms off its surface. This is also known as sputtering.

Moreover, the moon is known to have been a victim of a massive bombardment of comets during its initial years of formation. These comets could have imparted water molecules, and due to the cold temperatures deep within a crater, the water molecules might have solidified into beds of ice.

Also, due to such a thin atmosphere, the moon, unlike its Earthly neighbor, cannot moderate its temperatures or protect itself from trespassing meteors.

So, not only does the moon have a thin peel of an atmosphere, but it also consists of unusual gases, such as sodium and potassium, which are highly unlikely to be found in the atmospheres of Earth or Mars.

Until the groundbreaking discovery of ice beds on the moon, its lack of an atmosphere was – and to some extent still is – an irrefutable popular perception or widely accepted conventional wisdom. Let’s rewrite the textbooks, shall we?