No, there is no direct evidence that underground nuclear testing can trigger earthquakes, but mankind can cause earthquakes in other ways

Since the Atomic Age began back in July of 1945, following the detonation of an atomic bomb over Hiroshima, Japan, the world has had a complicated relationship with nuclear power. For decades, it was believed that nuclear weapons would destroy humanity, likely in the aftermath of an all-out atomic war between the USSR and the USA. However, an attack on a city wasn’t the only source of fear for people around the world.

As more and more nations developed their own atomic programs, testing was an unavoidable element of their evolution. In short, once they created an atomic bomb, they needed to make sure it worked.

In the past 70 years, roughly 2,000 nuclear detonation tests have occurred on this planet. Of those tests, nearly 75% of them took place underground.

For decades, there has been a growing fear that underground nuclear tests, which can release as much energy as 5 million tons of TNT, could cause devastating earthquakes and destabilize the very foundation of our planet. The question is… can nukes actually cause earthquakes?

Short answer: No, there is no direct evidence that underground nuclear testing can trigger earthquakes, but mankind can cause earthquakes in other ways….

In the decades following the development of the first nuclear bomb, research on the physical, geological, short-term and long-term effects of nuclear bombs was extensive. After realizing that nuclear fallout from above-ground nuclear testing had disastrous effects on the environment and the health of any people affected, it was widely agreed that testing would be safer underwater, in space or underground, where the radiation could be contained or dissipated in a safer way.

Underground nuclear testing was the chosen method of many nuclear nations, including the USA, USSR, Great Britain, France, China, and most recently, North Korea. All nuclear testing was banned in response to an international accord in 1996, and the only nations to have breached that were India and Pakistan (both in 1998, underground) and North Korea (2006 and 2008, underground). 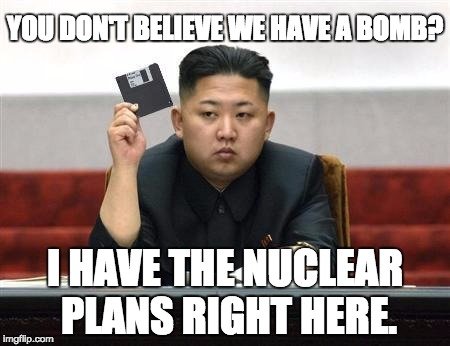 The process of underground nuclear testing is rather straightforward. A large hole is dug straight down into the ground, usually 1-3 meters in width, and up to 1 kilometer in depth. The nuclear weapon is lowered into this hole, and then filled in with layers of sand and pea gravel, which can absorb radiation and prevent it from entering the atmosphere. There is also a number of lead-lined sensory equipment that can record the explosive strength of the detonation.

This is not a perfect system, although it is widely considered the safest means of testing, both for nearby populations and the environment itself. In more than 100 cases of underground nuclear testing by the United States alone, radiation did end up escaping into the atmosphere.

The controversy in recent years has arisen due to the significant increase in earthquake frequency all over the globe, leading many to suspect that these massive underground blasts were affecting the tectonic plate structure and behavior, leading to a more volatile planetary crust. Conspiracy theorists, scientists, governmental leaders and common citizens over the years have supported and spread this idea, but it simply isn’t true.

The idea of manmade nuclear bomb-inspired earthquakes (or “anthroquakes”) is a frightening prospect, but according to the United States Geological Survey, that shouldn’t be cause for concern. What people fail to realize is the sheer size and strength of the Earth’s tectonic plates. The amount of strain that can be handled on a daily basis by these plates is enormous. A 4o-kiloton bomb, for example, releases 100 times less energy than the strain induced on tectonic plates by the diurnal movement of the planet’s tides. Essentially, if the tidal movement on the planet isn’t causing earthquakes on a daily basis, then a few nuclear detonations underground won’t be enough to rearrange the tectonic plates.

The coincidental nature of certain nuclear detonations with earthquakes in the region reignited concerns over the effects of nuclear testing on the tectonic structure of the planet, but studies have shown that thermonuclear energy release, when moving in a similar way as seismic waveforms, do not have pronounced adverse seismic effects further than 40 kilometers from the blast origin (although there is anecdotal evidence that buildings are affected even beyond that distance). Attempts to link nuclear testing with earthquakes thousands of kilometers away are therefore misleading and not based in fact. Correlation does not guarantee causality, but many people are eager to jump to these conclusions.

One of the final nails in the coffin of this theory comes from a 1971 underground nuclear test near the Aleutian Islands, in Alaska. It was a 5-megaton hydrogen bomb, detonated by the United States, and had a body wave magnitude of approximately 6.9 on the Richter scale. This was the largest underground detonation in history, and despite it being set off in the seismically active region of the Aleutian Islands, no subsequent seismic activity on the nearby tectonic plates occurred.

Although manmade earthquakes caused by nuclear testing doesn’t have the ability to cause earthquakes, humans have been the source of earthquakes in other situations. The instantaneous release of energy (occurring in a millionth of a second) connected to a nuclear explosion is not nearly as significant as the shifting of mass. You can imagine it in these terms; driving a car into a tree is not nearly as impactful as slowly applying more and more weight to the top branches until the tree snaps in half under the strain.

Human beings are good at many things, and moving mass around is one of them. Creating dams can change the weight on a certain area of a tectonic plate by hundreds of millions of pounds, namely the area of the valley that backs up to a dam. When the Hoover Dam was created, hundreds of small earthquakes were detected in the region, despite it not being seismically active before that point. Some researchers believe that up to 1/3 of anthroquakes are caused by reservoir and damming efforts in various parts of the planet, particularly those in seismically active areas.

Mining thousands of tons of coal from the center of a mountain can, once again, dramatically shift the stress load on a tectonic plate, resulting in small seismic quakes resulting purely from human activities. Research points to nearly 50% of anthroquakes being caused by mining operations around the world.

As you can see, human beings can do a lot of foolish things to negatively impact the planet and make it a less stable place. However, while nuclear detonations are some of the most feared and destructive forces on the planet, they are not the human activities that we should be worrying about as the earthquakes keep piling up around the globe.