The colored plastic balls hanging on overhead electricity wires are called aerial marker balls, and they are installed along the length of wires to act as a visual warning so low-flying aircraft don’t run into them.

If you are someone who pays attention to the wires hanging above your head (in other words, you’re a nerd), then you have likely observed those big, basketball-sized colored balls hang along the length of power lines. However, those balls are not just limited to power lines; you might find such colored balls hanging on communication lines and guy wires as well. 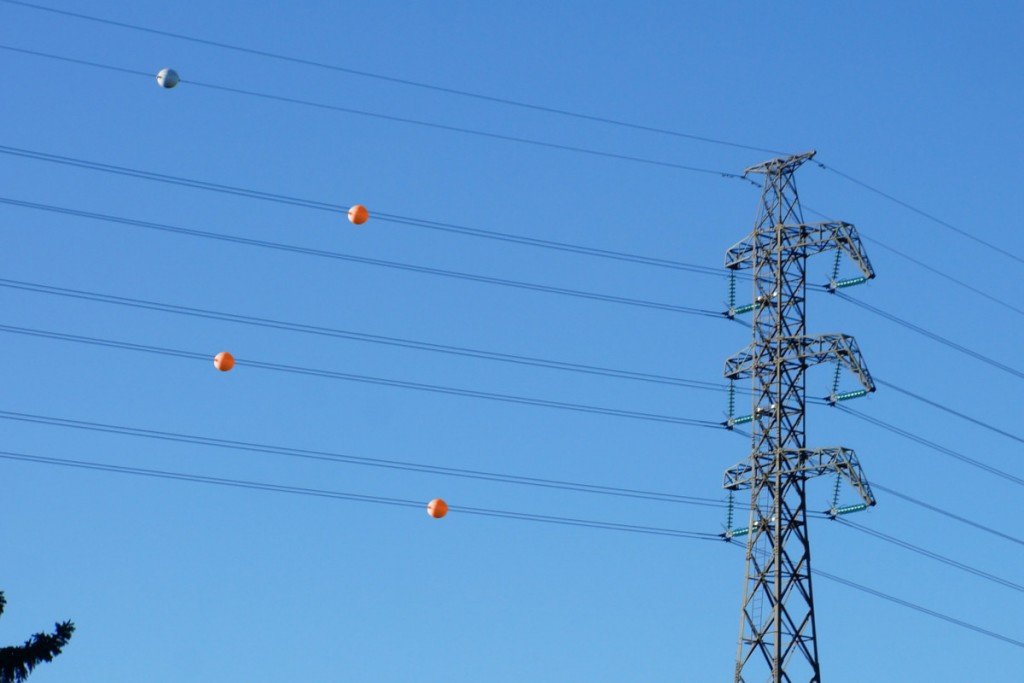 Surely those plastic balls fulfill some functional purpose, or are they just there to adorn the otherwise boring wires?

Challenges of an aircraft flying too close to the ground

As you already know, aircraft fly very high in the sky. Commercial jets, for instance, fly in the range of 35,000-40,000 feet above the ground. Military aircraft fly at different altitudes, depending on their operational requirements. This is to say that most aircraft fly at quite a high altitude, and there are a few reasons behind that.

First, flying too close to the ground poses the obvious danger of ramming into or striking objects on the ground, such as tall buildings, towers or even trees. You also can’t look very far ahead, since your field of vision would be blocked by stuff on the ground. 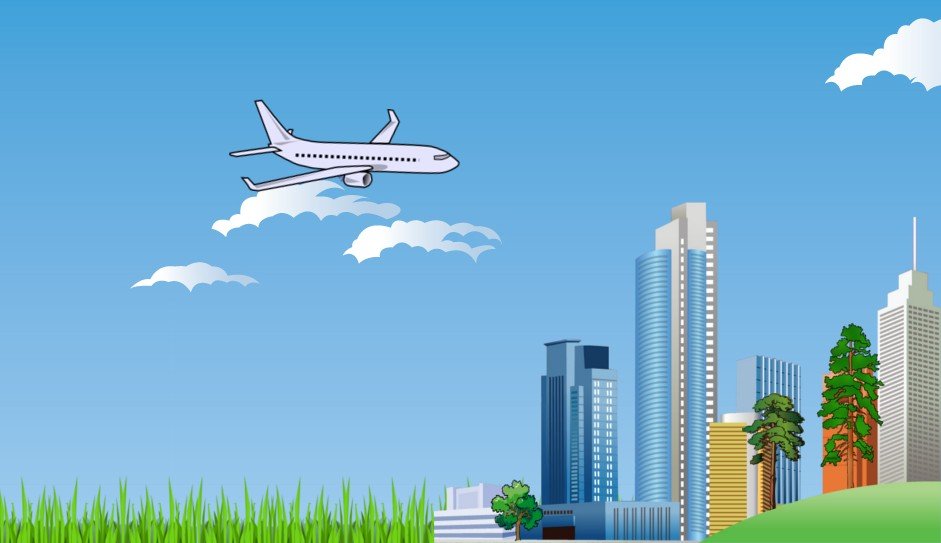 Too much hindrance in front of the airplane

There are countless technical reasons as well, such as high air density, poor radio reception, chances of engine inefficiency and so on.

However, there are moments in every flight that occurs anywhere in the world, when you have to fly too close to the ground – the crucial minutes of takeoff and landing.

Take off and landing are, for obvious reasons, the two most critical parts of a flight. (Photo Credit : Pixabay)

As one can imagine, these are the two most critical parts of any flight. Studies show that most plane crashes and accidents occur during either of these two stages. Since aircraft fly very close to the ground during takeoff and landing, aviation professionals have to make sure that the chances of any untoward incident are minimized.

Power transmission lines, communication wires and guy wires all pose a significant threat to aircraft, especially during takeoff and landing, as they’re too thin to be noticed from inside the cockpit. Additionally, their color is such that they tend to blend into the background, making it even more difficult for pilots to spot them, particularly in low-light conditions. Dirty windscreens don’t help either!

Therefore, unless the wire in question falls dead center in the vision of the pilot, it’s highly likely that the aircraft would fly straight through it, and in some cases, that would result in a catastrophe.

The plastic balls that are commonly seen hanging from overhead power lines are called aerial marker balls, or simply marker balls. These are used to highlight structures (in this case, wires) when it’s impractical to make them visually recognizable (usually from a distance) by painting them.

In simple words, you could say that those colored balls are installed along the length of overhead wires so that the wires can be seen by pilots of low-flying aircraft. You will see such markers on extensive catenary wires that run across canyons, rivers, lakes and valleys. 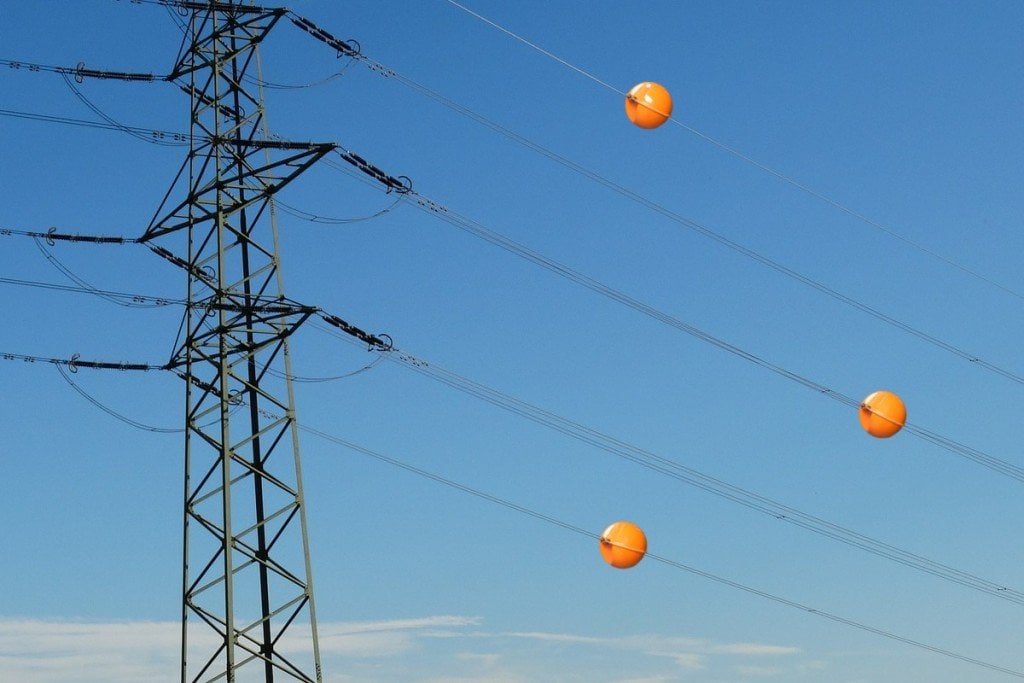 These markers are supposed to be easily spotted from a few thousand meters away. That’s why these markers are are big enough (not less than 91 centimeters (36 inches)) to be observed from a distance and distinctively shaped (such as, spherical or cylindrical). Also, they are usually painted in colors that offer the maximum contrast with the background terrain. Orange, red and white are some of the most commonly used colors in such aerial markers.

There’s also something called a balisor, which is actually a system of glowing beacons that use low-pressure neon lamps positioned along the length of high-voltage power lines. 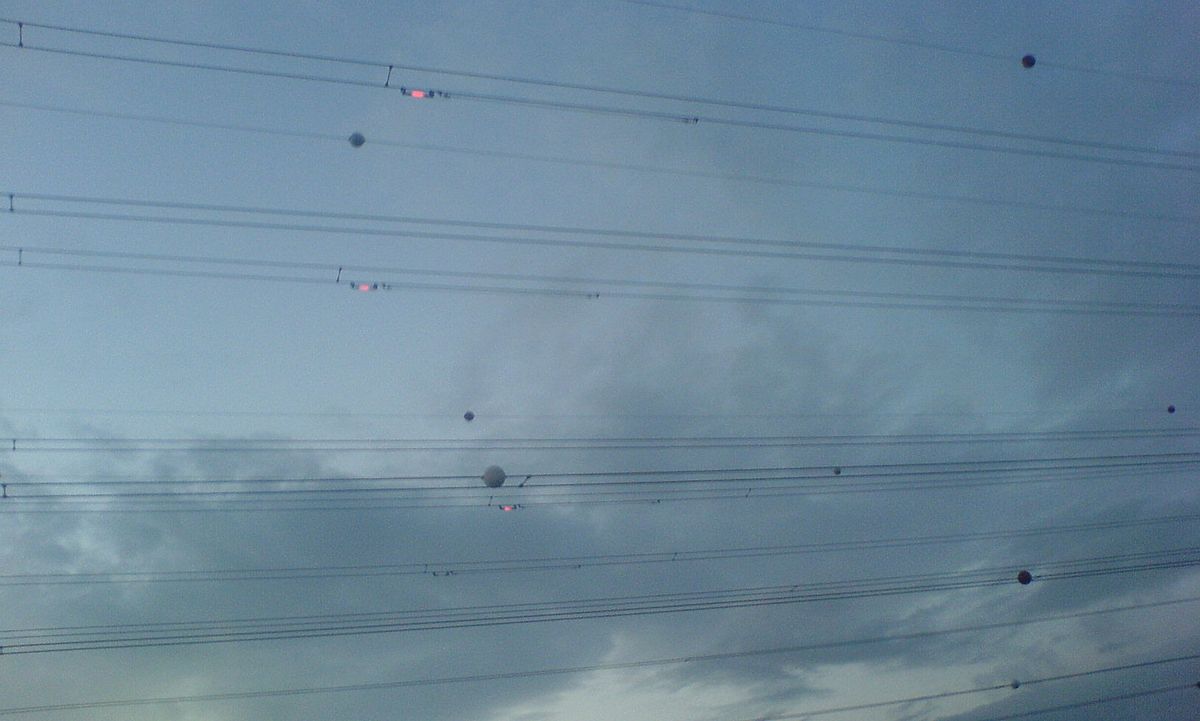 The thing about a balisor is that it consists of brightly-colored spheres (usually red) that glow at night using the power of the line on which they’re installed.

All things considered, I think it would be fair to say that aerial markers are incredibly simple, yet remarkably effective, devices that subtly safeguard the lives of people flying in the skies.