The primary reason commercial airplanes require separation is to prevent collisions. Commercial airliners carry hundreds of passengers and operate under civil air traffic guidelines, which are followed by every commercial aircraft flying in that airspace. By maintaining an appropriate clearance, they make sure to never get in the paths of other aircraft. This minimizes the risk of collisions occurring between planes.

If the title seems confusing or doesn’t make sense to you, allow me to elaborate.

You might already know that commercial planes need to maintain a minimum distance from other commercial planes during flight. That’s why the ATC (Air Traffic Control) exists. One of the primary and most critical tasks of the ATC workers is to ensure that every plane taking off, landing or even passing through their airport doesn’t fly too close or get in the way of other planes flying in the same airspace. 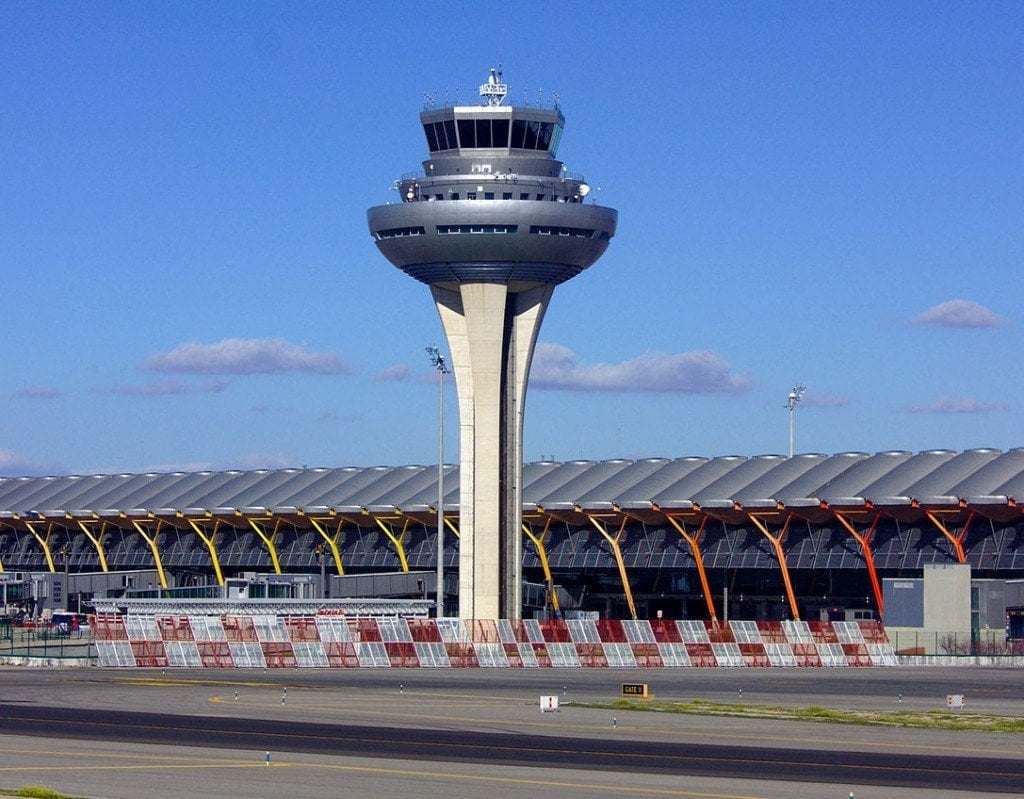 The guys sitting in the ATC have a huge responsibility. In a way, the lives of thousands of people depend on how they manage the airspace around their airport. (Photo Credit : Slashme / Wikimedia Commons)

Because if that happens, it could potentially lead to a catastrophe of epic proportions. That’s why commercial airplanes maintain separation from other planes, i.e., they keep a safe distance away from other planes in their vicinity.

However, military aircraft are nothing like that. They often fly very close to each other in tight formations on purpose. They don’t maintain a miles’ worth of clearance from other military aircraft in the formation. It doesn’t seem to make sense.

In the field of flying and aeronautics, the term ‘separation’ is used to refer to the concept of keeping a plane at least a minimum distance from another aircraft. The basic reason behind this is to keep planes from running into each other and avoid accidents due to secondary factors (e.g., wake turbulence). 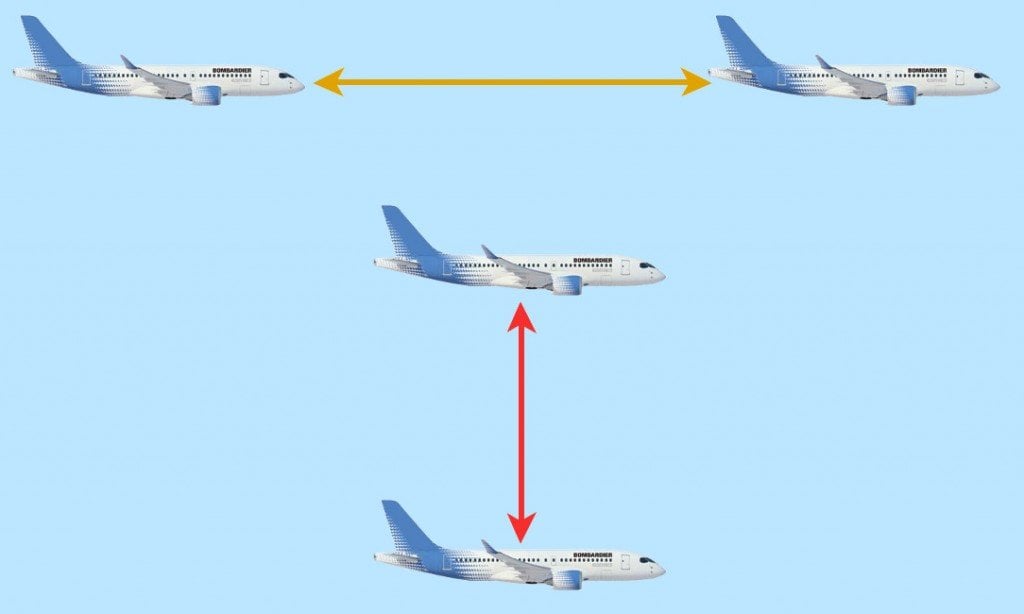 In the US, normal aircraft separation guidelines under IFR are defined in an FAA order (you can read the whole document here).

Two planes need to either maintain at least 1000 feet (305 meters) of vertical separation or 3 miles of lateral separation. These values increase if the planes in question are larger. 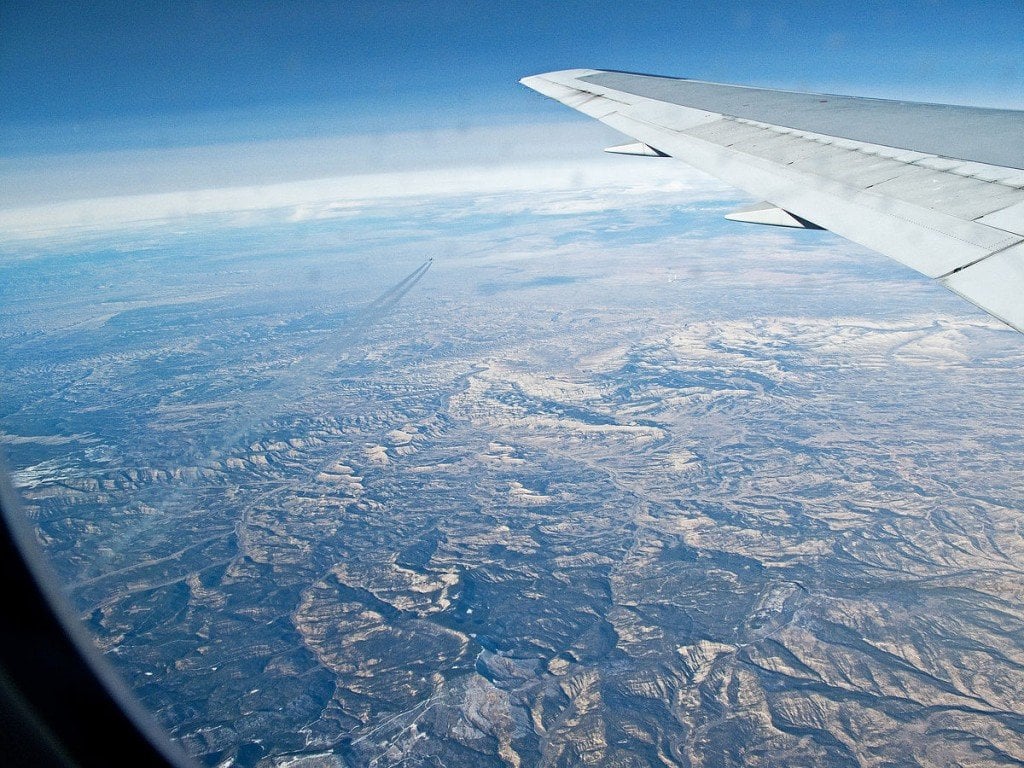 This picture is clicked from within a passenger airliner (Boeing 767) at cruising altitude. Notice the trail of another airplane flying below it. See how there is a separation between both these aircraft. (Photo Credit : Downtowngal / Wikimedia Commons)

Why do commercial planes need separation?

The primary reason is to prevent collisions. Commercial airliners carry hundreds of passengers (as opposed to military jets, which carry only a few) and operate under civil air traffic guidelines, which are followed by every commercial aircraft flying in that airspace. By maintaining an appropriate clearance, they make sure to never get in the paths of other aircraft. This minimizes the risk of collisions occurring between planes.

They also maintain a separation because of something called wake turbulence. When a big plane flies, its wings produce the lift it needs, which in turn produces wake turbulence, i.e., turbulence left in the wake of the plane. 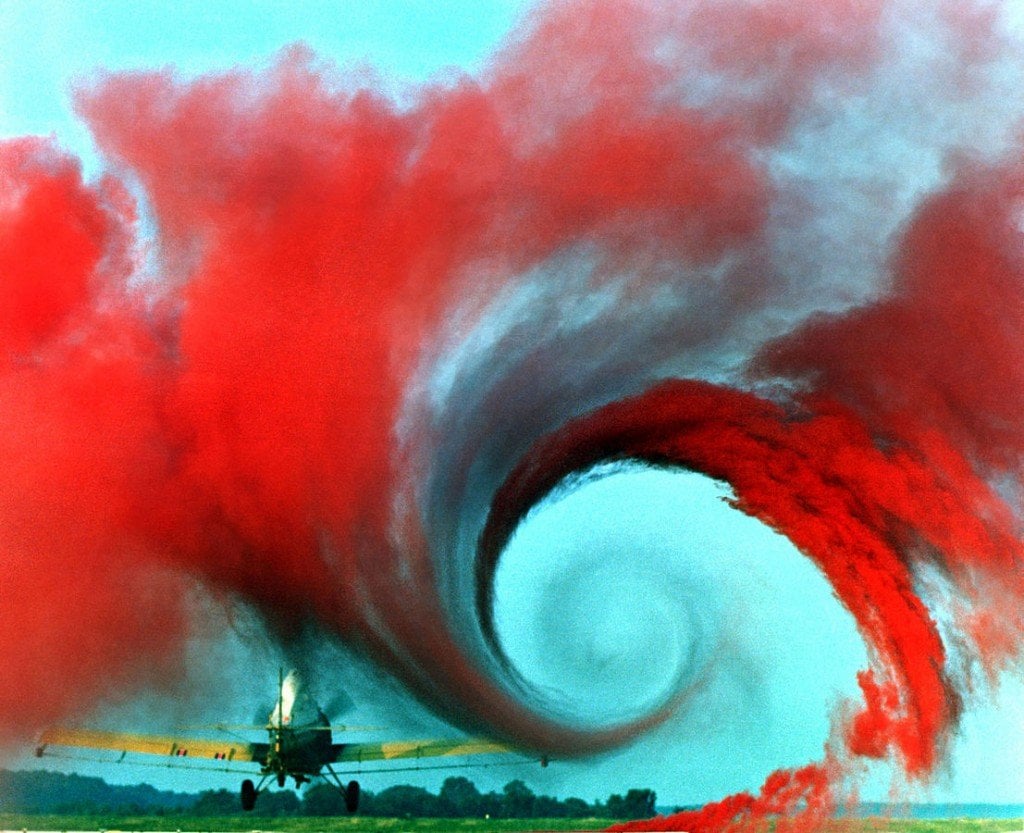 If two commercial planes fly too close to each other, they risk getting mixed up in the disturbance in the wind created by the leading plane, which could have nasty implications for the trailing plane.

Commercial airliners are also less maneuverable than military planes, and their pilots are less likely to be trained in formation flight. Lastly, there is simply not a good enough reason to make planes fly closer than they already are.

Why can military aircraft fly so close to each other?

Of course, military aircraft also need a minimum separation from other aircraft, but they easily manage to fly in close, tight formations composed of quite a few planes. There are a few reasons behind this. 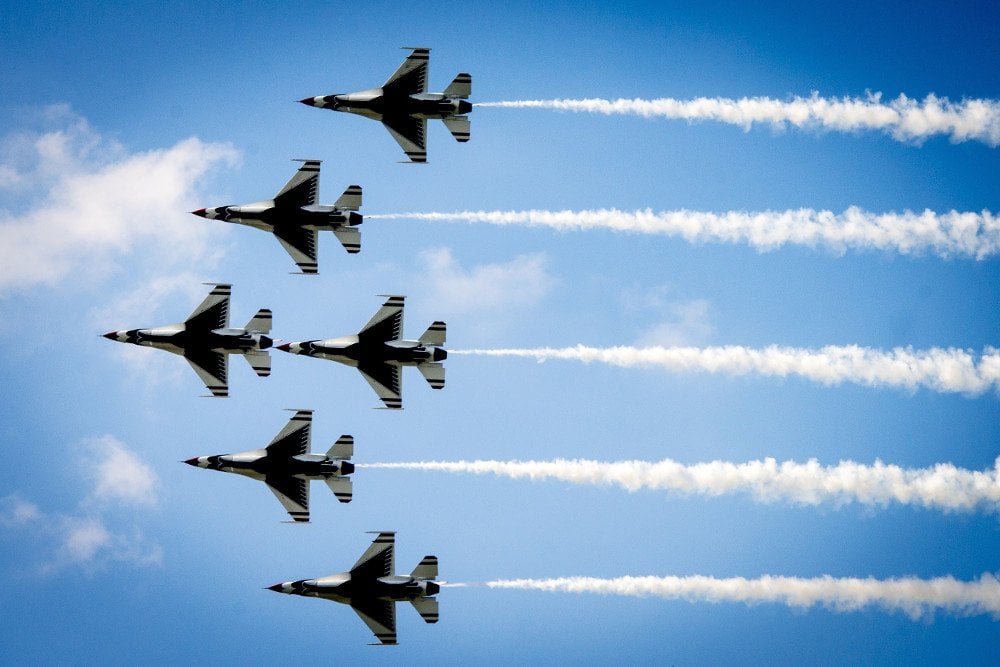 Fighter aircraft are much more maneuverable than commercial planes. They can take sharp turns and dip/climb in a split second at the very last moment. As mentioned earlier, separation between aircraft is for safety during sudden, unexpected maneuvers, not just for avoiding wake turbulence. Since military pilots are talking directly to the other pilots in the formation on a discrete radio frequency at all times, they know well in advance what maneuver their fellow pilots will make and can prep themselves accordingly.

Long before the actual flight, each pilot in the formation is briefed about the general flight plan, how it will be carried out and what formations they will be flying in. Thus, there are minimal chances of a pilot engaging in an unexpected maneuver to begin with. That’s why military pilots manage to pull off such death-defying stunts in the air, because it’s all planned and prepped in advance. 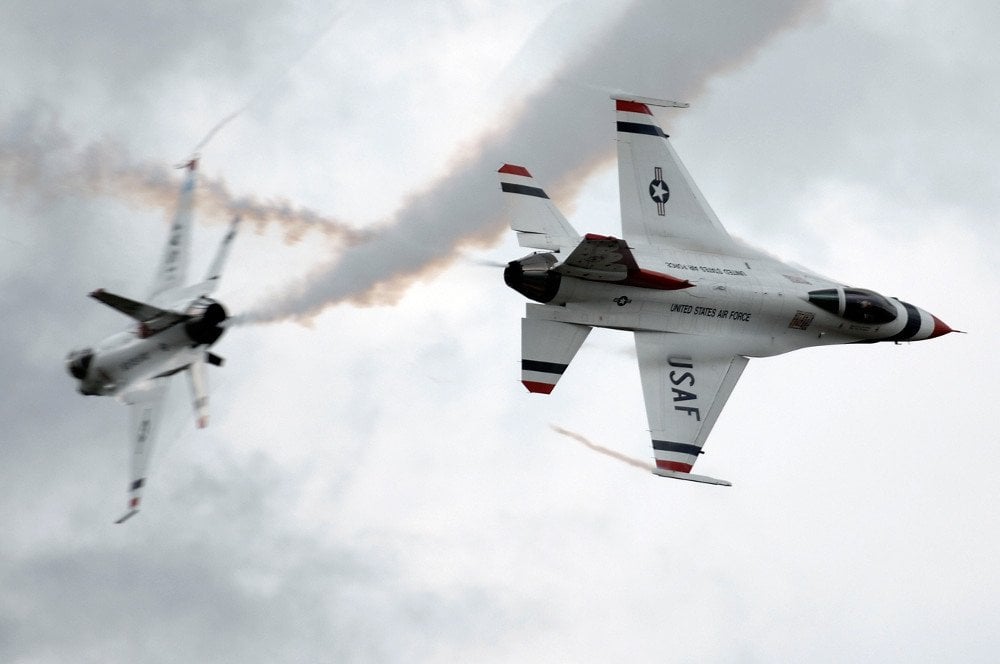 Last but not least, military pilots are trained to fly in tight formations. They spend hours and hours learning about flying in such formations, and then actually practice flying in them. The majority of commercial pilots can be generally assumed to not have that level of training or expertise to fly so close to other commercial planes.

That’s why commercial planes need to maintain a safe distance from each other, whereas military aircraft often fly very close to each other.