The main reason commercial airplanes don’t have parachutes for all passengers is because it’s not practical. Parachutes are bulky and expensive, and most accidents occur during takeoff or landing, when parachutes would be useless anyway.

Fighter jets and military aircraft have multiple parachutes on-board that can be used by passengers in the case of extreme emergencies – cases where jumping out of the plane is basically the only way to survive. Given the fact that commercial jets ferry significantly more passengers on a daily basis all over the world, wouldn’t it make sense to have parachutes for all the passengers onboard these planes too? 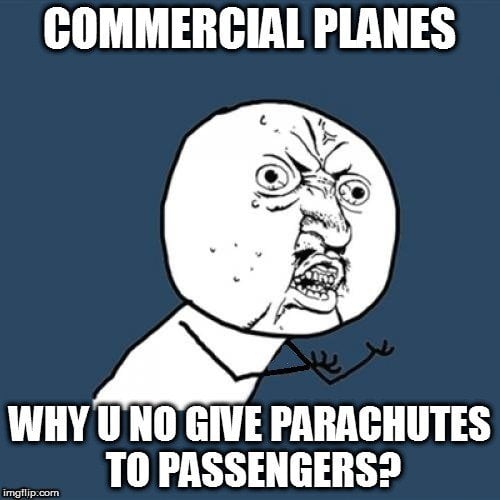 Why don’t commercial airplanes have parachutes for everyone?

Short answer: There are a few reasons, including the lack of parachute training of passengers, high speed of the airplane, cold temperatures at that altitude, non-conducive design of commercial planes and the cost spike, which make putting parachutes onboard commercial airplanes unviable.

Airline passengers have no parachute training

If you’ve watched enough action movies, you might believe that parachuting doesn’t require any practice; even a first timer would nail it without any assistance. 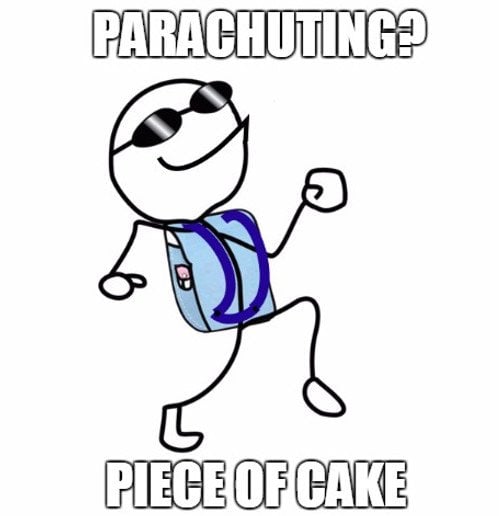 How hard could it really be, since all you have to do is strap it on, pull the plug and jump, right?

Parachuting is not that simple, at least in the sense that anyone (who has had no practice) could do it as easily as they show in movies. The most basic type of skydiving, i.e. tandem skydiving – where an individual is strapped to an expert throughout the plummet – also requires you to undergo at least half an hour of basic training and instructions. The riskiest kind of skydiving, where the subject jumps out of an airplane more than 10,000 feet above the ground, requires hours’ worth of proper training and practice before the jump.

An important thing to remember about skydiving is that it occurs under perfectly normal conditions. Since the jumps are pre-planned, the skydiver knows well in advance that they are going to jump out of a moving airplane. In contrast, passengers onboard airplanes would never know in advance that they might have to take the leap in the next few minutes. 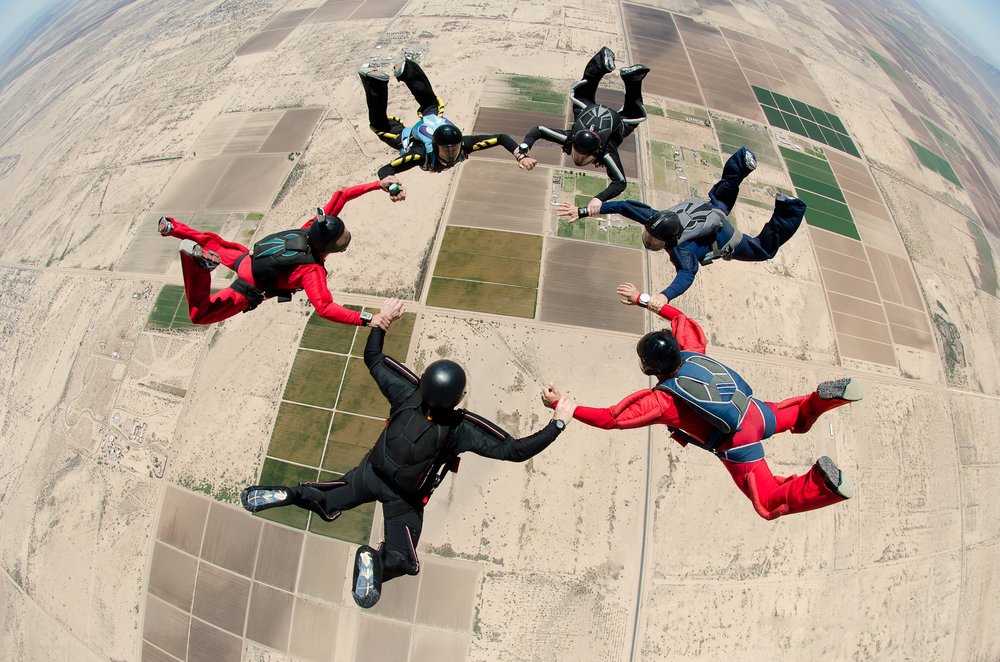 Skydives are extensively planned and prepared for in advance (Credits: Mauricio Graiki/Shutterstock)

In essence, what you have on a commercial plane are people who have never used a parachute in their lives, but have to strap on the gear effectively in only a minute or two and prepare to jump. They also have to do all this while wearing their emergency oxygen masks (we haven’t even factored in the environment of confusion and commotion that would rock the cabin in such an emergency situation). Clearly, this sort of exercise is unlikely to be as effective as it might initially seem.

Planned skydives, including the riskiest ones, occur no more than 15,000-16,000 feet above the ground. Plus, the planes these skydivers jump from are usually small and aren’t moving that fast. On the contrary, most commercial airplanes cruise at around 35,000 feet – an altitude where you won’t find any breathable air, and they also fly much faster. In order for passengers parachuting out of a downed airplane to not pass out due to hypoxia, they would need oxygen cylinders, provided that they ‘clear’ the plane safely, which, by the way, is another important concern because…

Planes that host regular, individual skydives are typically small, so skydivers clear it pretty much immediately after the jump. Large military aircraft, on the other hand, have a nice ramp at the back where parachutists can jump and steer clear of the fuselage. 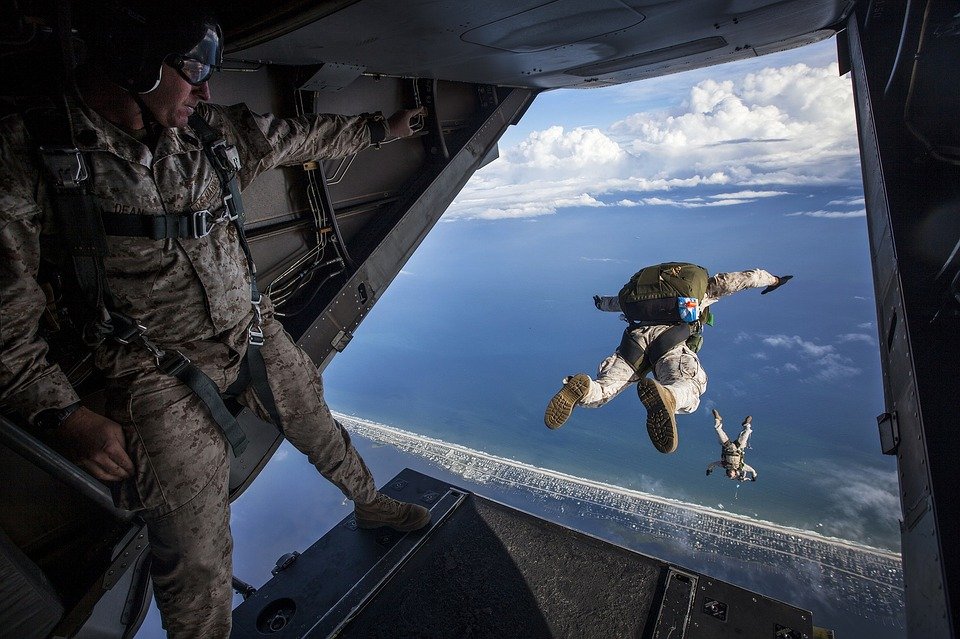 Military aircraft have a ramp at the back to facilitate skydives

Commercial aircraft, however, have neither a small body nor a ramp. Jumping out of a conventional airplane would include the serious risk of smashing into the fuselage of the aircraft (its wings or tail), and sustain grievous, if not fatal injuries.

Speed of the airplane

Then there’s the airplane’s speed. Commercial airplanes not just cruise at a very high altitude, they also go really fast. If one was to try jumping out of the airplane at that speed, it’s highly likely that may suffer grievous or even injuries on their neck.

Most accidents occur during landing and takeoff

Now, this is a purely statistical reason. The most practical time for parachuting out of an airplane is when it’s cruising. However, it’s generally observed that most fatal plane crashes occur either during landings or takeoffs – times when parachutes would be pretty useless anyway.

Parachuting kits are bulky and expensive

A parachute is too bulky to fit under a typical economy class seat. Plus, its heavy. Naturally, it would take up sizable space on the plane, which is already quite costly. Also, adding parachutes for every soul on a commercial airplane would easily add around 6,000-8,000 pounds to its overall weight, a situation that airlines desperately try to avoid. To top it all off, parachuting gear (helmet, altimeter, goggles etc.) is quite expensive, which means that airfare would increase significantly if parachutes were made mandatory on all commercial flights. 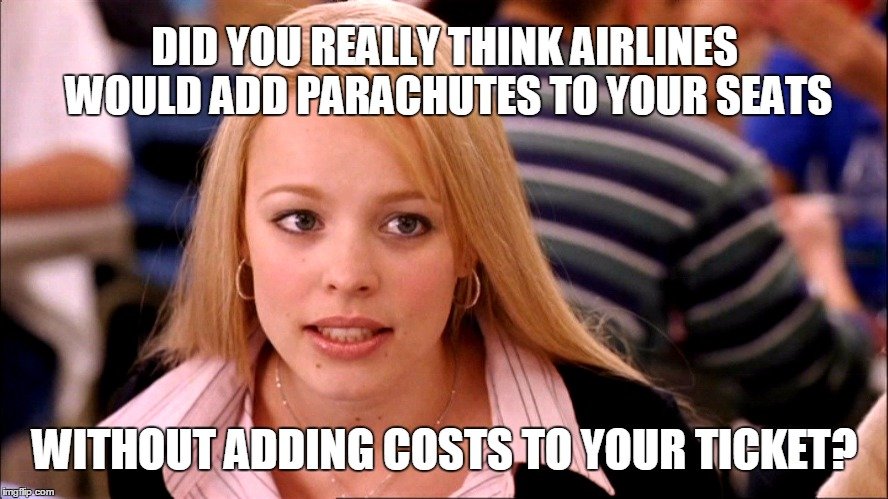 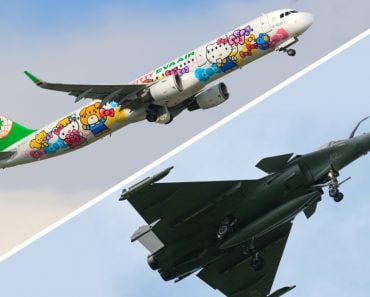 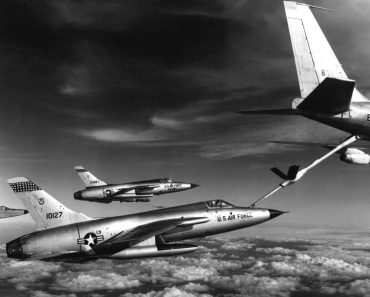