Airplanes get an unlimited supply of oxygen from the surrounding air. Outside air is supplied from the compressor stage of turbine engines and is passed through a bunch of machinery to ultimately be piped into the cabin for passengers. Also, there is an outflow valve, usually at the rear of the airplane, which collects and discharges the air inside the cabin. A constant supply of fresh air is therefore maintained.​

If you’ve ever travelled in a commercial jet, you would have noticed that, aside from the bland food and the obligation of being in the same place for hours on end, life at 35,000 feet is reasonably comfortable, at least if you’re not traveling every day. However, comfort is an incredibly subjective term, I know, so let’s just talk about a much more basic human need – survival.

The primary requirement for human survival is oxygen. Given that fact, traveling in a commercial airplane isn’t much different from being on land, an abundance of oxygen onboard the plane makes sure that we survive! We have discussed the emergency oxygen masks that drop out automatically in the event of cabin depressurization in this article, but how do we breathe so comfortably in a plane under normal conditions?

Natural availability of oxygen at 35,000 feet

You might already know that ‘breathable’ air is in short supply at the altitude where most commercial planes operate. However, the word ‘breathable’ has a lot of significance in this context, because the availability of air itself at that altitude is not actually a problem. In other words, there’s ample air at 35,000 feet, and there is sufficient oxygen in it. In fact, there’s even a reasonable amount of air at the altitude where the International Space Station operates!

So, there’s plenty of air at the height where airplanes fly; it’s just that the pressure of the oxygen in that air is too low to be inhaled directly by humans.

How fresh air is provided to passengers during flights?

Most commercial jets use the same idea of ‘bleeding’ hot compressed air from inside the jet engines and then passing it through a set of machines to be processed and finally piped into the passenger cabin.

As a plane flies, fast-moving air enters both the jet turbine engines. This fast-moving air is compressed as it passes through layers of fan blades inside the turbine. It’s at the compressor stage that a portion of the hot air is ‘bled off’ from within the turbine. The air generated at this point is therefore known as bleed air. 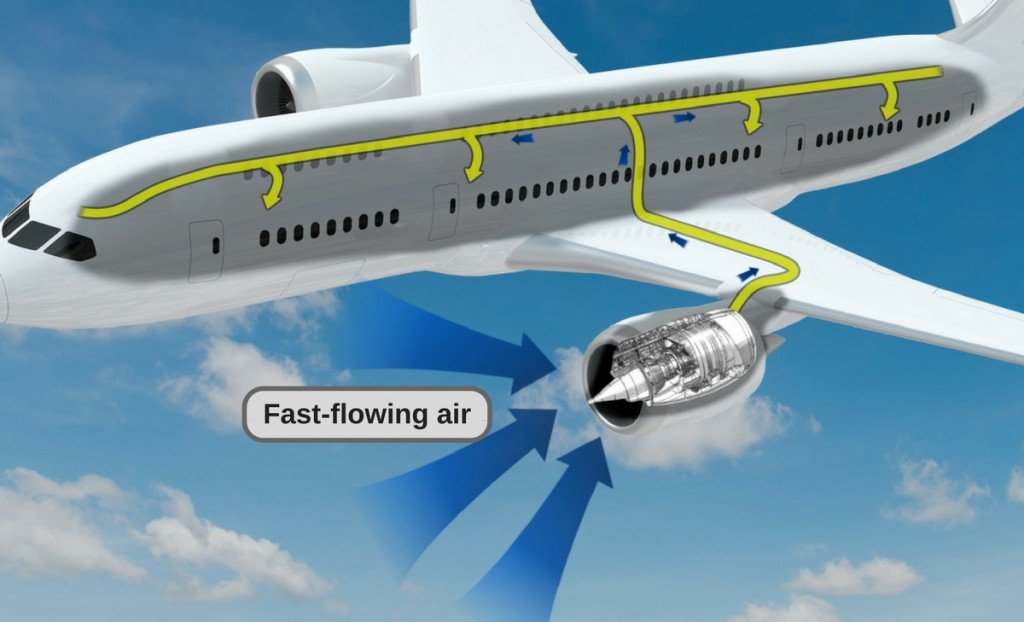 Bleed air from a jet turbine

Now, this bleed air is very hot, with a temperature in the range of a couple hundred degrees Fahrenheit, so it obviously must be cooled first. That’s why this hot bleed air is allowed to expand and passed through a heat exchanger so that it cools to a comfortable temperature. This cool, filtered air is then dispersed in the passenger cabin at a pressure that humans can comfortably breathe.

There’s also an outflow valve, usually located in the rear of the cabin, which ensures that the ‘used’ air is vented out of the airplane, thereby regulating air quality inside the cabin.

So, the two jet turbine engines you see on either side of a plane not only keep the plane airborne by providing forward thrust, but also help maintain cabin air pressure so that we remain comfortable and conscious throughout the duration of our flight.

Test how much you remember about breathable oxygen in airplanes.