In the event of a cabin depressurization emergency, passengers are advised to pull down their oxygen masks. The masks are attached to an oxygen generating system that produces breathable oxygen from a chemical reaction. The reaction is started by releasing a firing pin, which is activated when you tug on the mask. The chemicals in the generator burn and release oxygen gas, which is channeled to your nose through a pipe. The mask will provide breathable oxygen for 12-20 minutes, depending on the size of the generator.

Before any airplane takes off, the cabin crew gives a brief demonstration about the various safety procedures that passengers need to follow in case of an emergency. In my opinion, the most interesting part of that short demo is the brief intro of oxygen masks that are enclosed in chambers above our seats, designed to drop down if the cabin suddenly loses air pressure. Those masks help passengers breathe for a few minutes in a depressurized cabin. 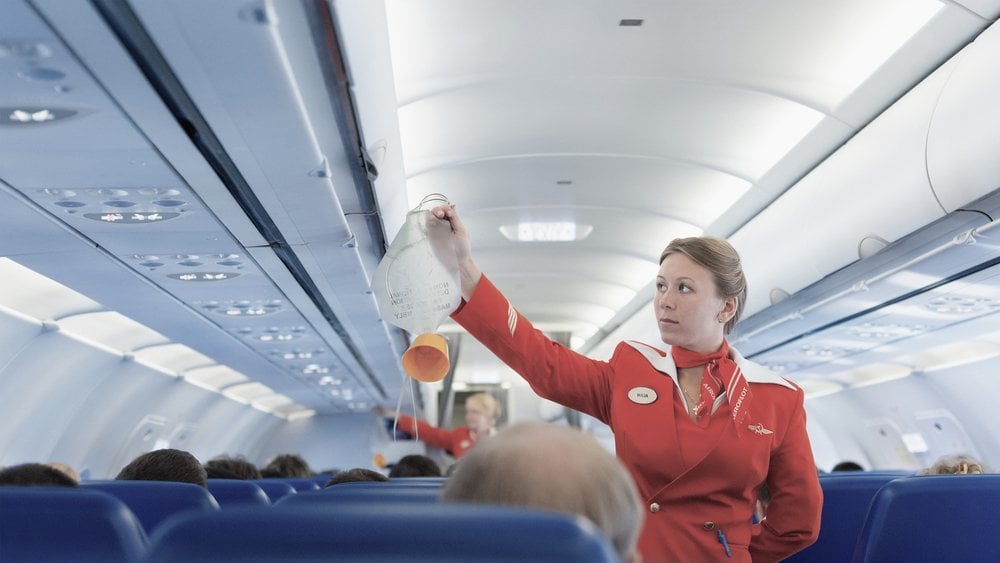 The question is: where do they get the oxygen from? Do commercial airplanes carry a huge tank of oxygen just in case such an emergency occurs?

Short answer: In most commercial airplanes, there is a chemical oxygen generation system, wherein pulling down an oxygen mask removes a firing pin, which initiates a chemical reaction that produces oxygen as a byproduct.

The Need For An Emergency Oxygen System In Aircraft

You might already know that air pressure decreases as altitude increases. Past a certain altitude above the surface of Earth, the air becomes too thin to remain breathable. In most commercial jets, if the cabin pressurization is disturbed above an altitude of 14,000 feet, panels containing oxygen masks pop open automatically and multiple oxygen masks drop down above/in front of the passengers’ seats. Typically, aircraft designers put an extra mask per row for contingencies, so a row with 3 seats will have 4 masks.

Note that these masks are NOT required to be worn by passengers for the entire time until the plane lands. They provide oxygen only for a short time, during which the pilots sacrifice the aircraft’s altitude and descend to a safe zone where the outside air becomes breathable once again. The crew might also announce ‘masks off’ to let people know that they have descended to the breathable part of the atmosphere and that they no longer need oxygen masks to breathe.

Where Do Oxygen Masks Get Their Oxygen From?

One might think that airplanes carry a huge scuba tank onboard and that all the oxygen masks are connected to it. In the case of cabin depressurization, the tank could be switched on to supply oxygen to the crew and passengers. Similarly, it could be shut off once the plane has descended to a safe altitude. That way, you could also conserve the unused oxygen.

Also Read: How Do People Get Breathable Air (Oxygen) In Airplanes?

That does sound a like a pretty sensible way to supply oxygen to passengers during emergencies, doesn’t it? However, that’s not how it happens in reality. Breathable oxygen is not stored in tanks onboard airplanes; instead, it’s produced as a result of a chemical reaction. The insides of an oxygen candle used in airplanes

This mixture is activated by the application of heat, which is provided through the activation of a small explosive charge (yes, a very small explosion actually gets the chemical reaction going). But what sets off the charge?

Have you ever paid attention to the fact that, during the safety demonstration, they actually advise you to tug on the oxygen mask? This is because when you tug on it, the firing pin that holds back the charge is released, kick-starting the chemical reaction. The chemicals burn and release oxygen gas as a byproduct, which is channeled to your nose through a pipe (after filtering out other byproducts). 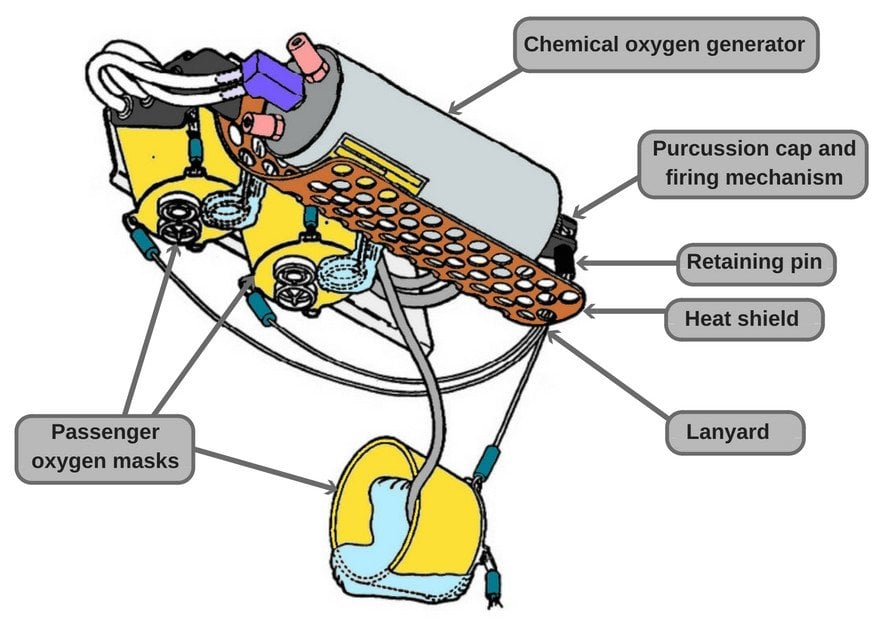 A representation of the emergency oxygen system found in most commercial airplanes (Photo Credit : The National Transport Safety Board / Wikimedia Commons)

Since the chemicals practically “burn” during the reaction, it’s highly likely that one might sense a burning smell, which could cause panic amongst passengers. However, it’s perfectly normal and is in no way a safety risk to the plane.

The reaction goes on until the chemicals are exhausted. So, once the mask is pulled, it can provide breathable oxygen for 12-20 minutes, depending on the type and size of the oxygen generator. At any rate, you only need the ‘mask oxygen’ until the plane descends to 10,000 feet, as the surrounding air will become breathable again from that point on.

Also Read: What Happens If You Get Sucked Out Of An Airplane?

The main takeaway from all of this is quite simple… if you ever happen to be in an aircraft that experiences cabin depressurization, don’t panic! Just tug on the oxygen mask, put it your nose and remember – chemistry has got you covered!

Test how much you remember about oxygen supply on airplanes